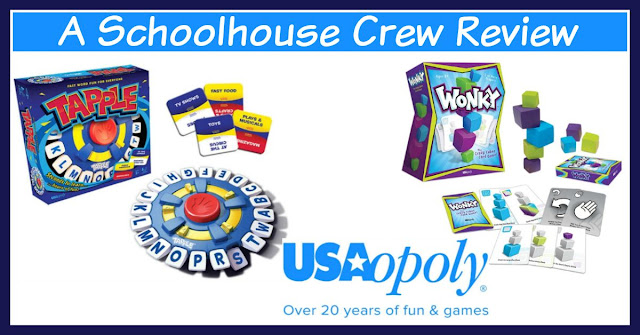 We absolutely adore family fun nights in the Prince household.  After a long week of school and my husband out of the house working long hours, it's always wonderful when we get to spend time together as a family watching movies, playing games and just hanging out.  We have a huge cabinet dedicated just to board games that we enjoy and are always on the lookout for something new to add to our collection. For this reason, when we were given the opportunity to review not just one but two family games from USAopoly, we knew this was a review we really wanted to be on.  USAopoly was very generous and gave us two new games to try: both "Tapple: Fast World Fun For Everyone" and "Wonky: The Crazy Cubes Card Game". 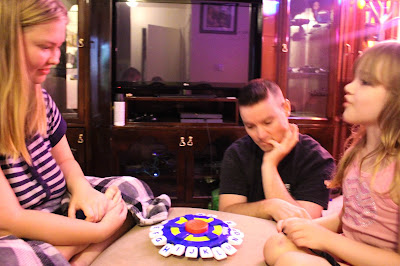 USAopoly, who has been in the business for over 20 years, is a leading developer and manufacturer of board games and puzzles. Started in 1994, they have many award winning games for the entire family and produce many of the games you see in stores today. Many of the special edition versions of games such as Monopoly, Risk, Clue and Trivia Pursuit most likely have the USAopoly tag on them. 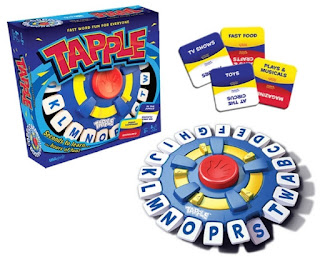 Tapple is an extremely fast pace word game for 2-8 players that is very easy to learn to play. The game consists of the Tapple Wheel and 36 cards that contain 144 different categories for playing, which are stored inside the Tapple wheel for convenience.  You simply pick a category such as "Things in the Ocean" and then take turns naming things that fall into the given category.   The Tapple Wheel contains a 10 second timer that marks each players turn.  The players must take turns naming an object from the given category, hit the letter that corresponds with the object and then hit the timer to reset it before it signals time up. Each tap of the timer will restart the countdown for the next player.  However, once a letter is used, it cannot be used again and the next player must name an item using the letters remaining. If the player fails to name an object before the timer stops, that player is out and the category continues with the remaining players until either all but one player is left or the last letter is played. This game is recommended for players age 8 and up.

The second game, Wonky, is the complete opposite of Tapple.  Instead of being fast paced, this game 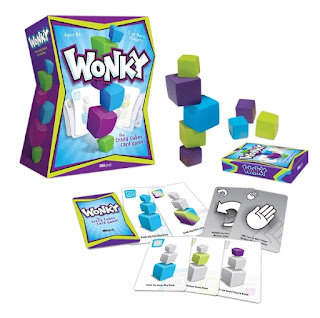 is more about precision and good judgement.  For 2 or more players, the game consists of 9 blocks of three sizes and colors, 54 strategy cards and a nice bag to keep the blocks in.  The 9 blocks are what makes the game difficult to play- there are 3 curved sides and 3 flat sides on each block. Players select a card and then place the block that corresponds with the card. Each block is played by stacking on top of each other.  Because the blocks have curved sides, this makes it very difficult to stack them without making the tower wobbly and causing it to fall down. Since the cards in your hand dictate how you can place blocks, this means that you might be trying to stack a larger block on top of a small block, making the tower very unstable.  Some cards allow you to pass your turn to the next player in the hopes that they will cause the tower to fall. If the tower falls, the player responsible must then pick up 3 cards and start a new tower. To win, you must either use all your cards or be the first player to stack the 9th block on the tower without it falling over.   This game is recommended for ages 8 and up. 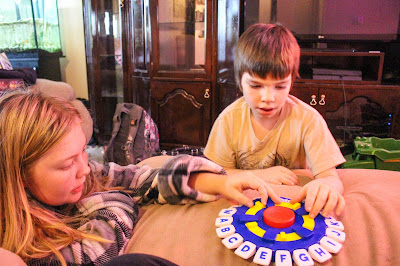 When the box containing these two games arrived, the kids immediately wanted to pull them out and start playing. Since that day, both of these games have quickly become a favorite in our household and the kids have requested them on many occasions.  Tapple took a bit of time for both Ashleigh and Garrett to get use to the fast pace, but once they caught on, they have absolutely loved it and everyone agrees that Tapple is a lot of fun.   Ashleigh and Alyssa seem to enjoy Tapple much more than Garrett does. Garrett enjoys the slower pace and the strategic thinking involved with Wonky. Plus Garrett thinks it is absolutely hilarious when the tower falls down.

We've played both games on two separate family game nights with the entire family.  It was very nice to see Alyssa helping the kids with card selection with Wonky as usually they are all arguing.  Game night almost always brings cooperation and fun.

Tapple has really helped the smaller kids with identifying objects by their beginning letter as well as developing quicker thinking skills.  The first few times we played, we did practice runs without the timer counting down to allow both of them learn what the game play was. They still occasionally get caught by the timer but for the most part they are really good at coming up with objects to name and remembering to hit the timer. 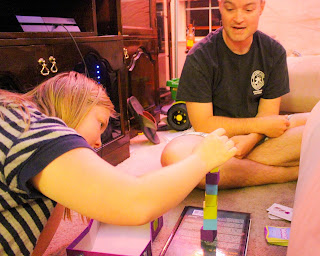 Wonky has also been a lot of fun for the family.  As said, Garrett really enjoys this one as it's very textile and he enjoys trying to figure out which way the blocks should go.  He usually takes a while to actually feel the curves of the blocks before determining which way he wants to place them on the tower.  After trying to play a few times at our table, we realized it was much better to play on the living room floor with a book underneath the tower as trying to reach across the table tend to cause the tower to collapse..  We did manage to build a 9 block tower (Alyssa placed the winning block) in one game but that was a matter of luck with the cards allowing us to stack the blocks from biggest to smallest.

Overall, we had a lot of fun with both of these games and are so glad to have them as an addition to our game collection.  I foresee many rounds of Tapple and Wonky in our families future.  My only suggestion would be for USAopoly to come out with an expansion pack of new categories for Tapple later in the future as I know we'll exhaust the 144 topics in no time.

Both Tapple and Wonky can be purchased at the USAopoly website, although I have seen Tapple for sale at local retailers in my area. Both are priced just under $20 and are well worth the price, in my opinion. 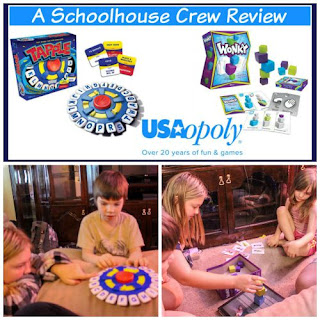 Posted by Brenda Prince at 9:07 AM