34 Weeks of Clean : The Pantry 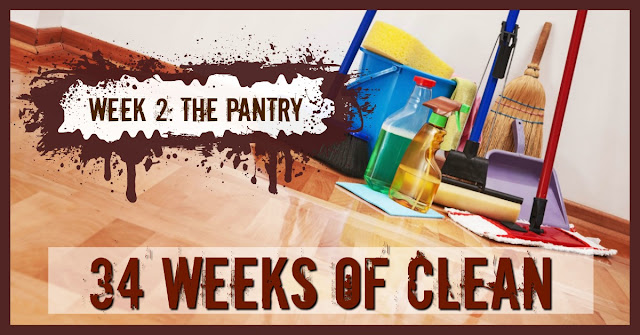 Here we are again at week 2 of the 34 weeks of clean.  I actually did this particular challenge last year and I'll be honest, most of the changes that I made at that time have remained the same.  So, I'll repost part of last years huge cleaning job so you can see what I started with and then we'll do a bit of tidying up just to say "Hey, I accomplished the challenge". :)   If you want to join in on this week's challenge, be sure to click on the grapic below to head over to Michele's page at Family, Faith and Fridays. 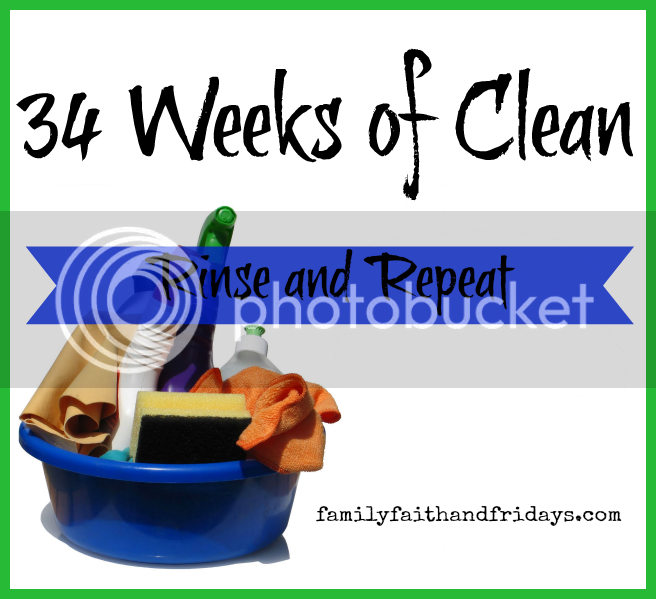 So, when I originally accomplished this challenge a year ago, this was the current condition of my pantry..  I'll be honest, it was pretty bad.. I honestly hate the layout of the kitchen in this house, as most of the cabinets are pretty worthless and so everything pretty much just got shoved into wherever there was room.

After cleaning out all the can goods and packages from the shelves and throwing out anything that was out of date, this was how the food pantry ended up looking. 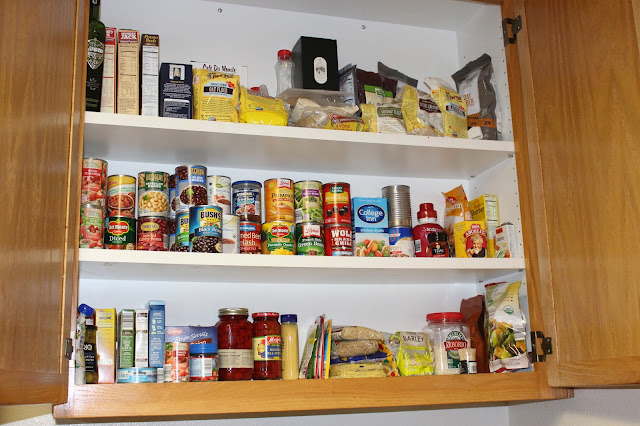 So, granted, it wasn't a HUGE difference, but it was more organized..   Charles said cleaning it out and rearranging it seemed to open up more space, I don't know about that but at least it's clean inside.
Then it was time to attack the other "pantry".. It was my hopes to maybe find a way to permanently eliminate some of the stuff in this cabinet.

Sooooo, I boxed all the car cleaning stuff into a plastic container and handed it over to my husband.. 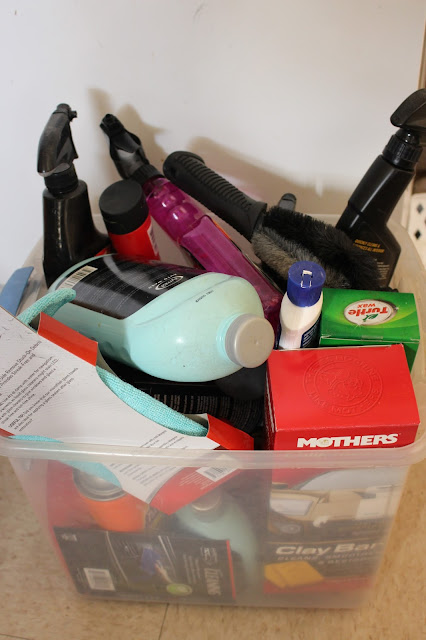 Here's starting to empty out the shelves and get them vacuumed and wiped down with some LA Awesome..  Remember when I was talking about cheap material?? This entire unit is partical Wood /Pedboard and is glued to the wall.. lol 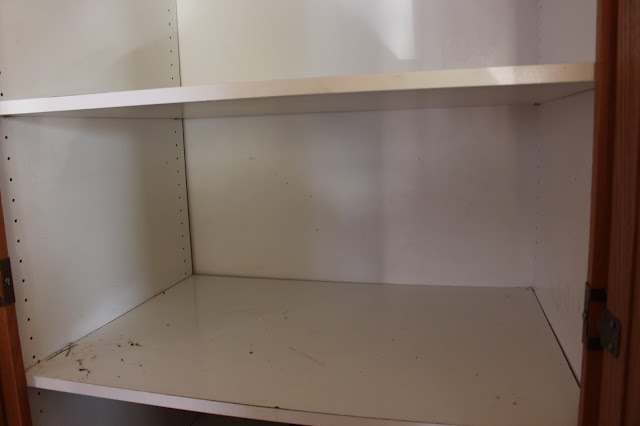 And since my husband said I was "husband-shaming" him by showing all the car cleaning stuff,  have to be fair and post my own picture of shame..
I call this photograph "I Have A Drinking Problem"..  Yup, it's true.. I can't help it..  All of these boxes are tea bags.. Lots and lots of tea bags of all sorts of warm tea goodness..   I have teas for any mood I might be in.. Can I just say, I love tea??? 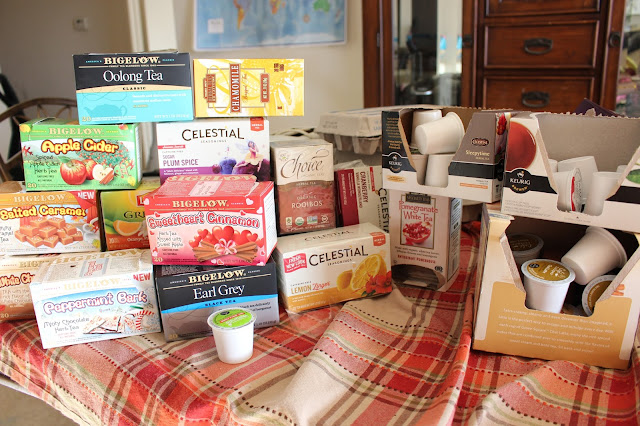 I had a drawer that I don't use for anything other than to keep the spindle for my food processor in.. The draw isn't wide enough to do anything else with except maybe dish rags and I have another area for those... Soooooooooo.... 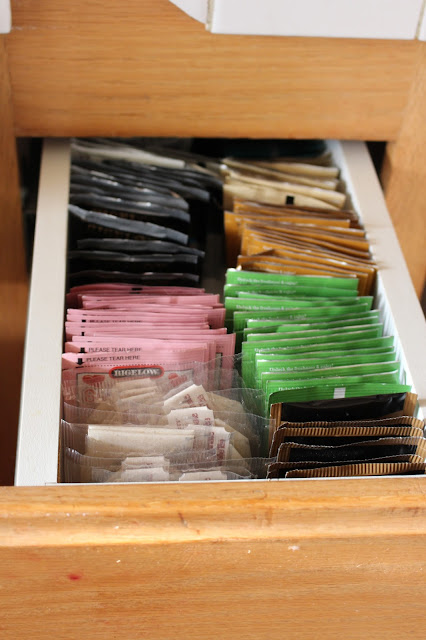 So after some more thinking about why the heck were things organized the way they were, I decided to do some more changes.. One thing that had always bugged the heck out of me was the fact the cabinets we kept our plates and cups in, while convenient to the stove and counters for meal preps, stunk otherwise.. In order to unload the dishwasher, we had to put the plates on the counter or stove, load the dishwasher with the dirty dishes, then close the dishwasher to access the cabinet. It was also a hard reach for me in all honest and many times I have to use a step stool to get to the plates.. Again, why I never thought to put them in the pantry before (maybe because it had ALL of my husband's car cleaning supplies in it??) but as I eliminated stuff, I realized there was more than enough space for the dishes.. 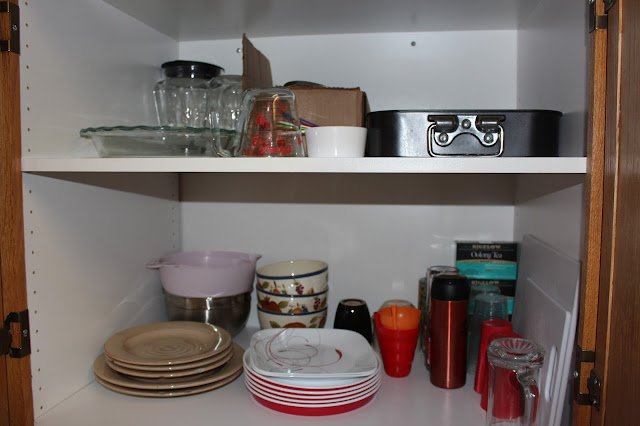 BTW, see this roasting pan??  My husband and I searched high and low for this roasting pan two Thanksgiving's back..  I had checked all the places I could think of where I might have put it, all the logical spots such as where I keep bakeware and pots..  Guess where it was?? Hidden behind all those car cleaning supplies ;) 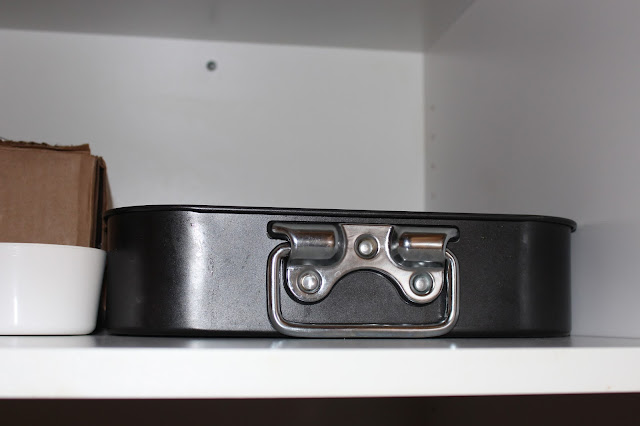 Since we have a zoo full of pets, I have to have a designated area for pet supplies.. Foods, substrates, bird feeders, ect.. So the Third shelf is now the dedicated pet shelf.. 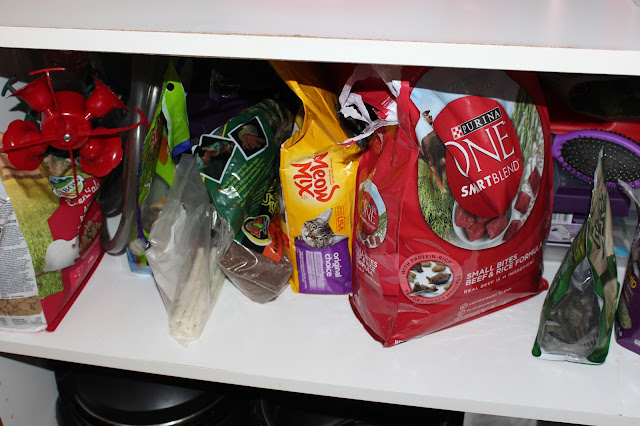 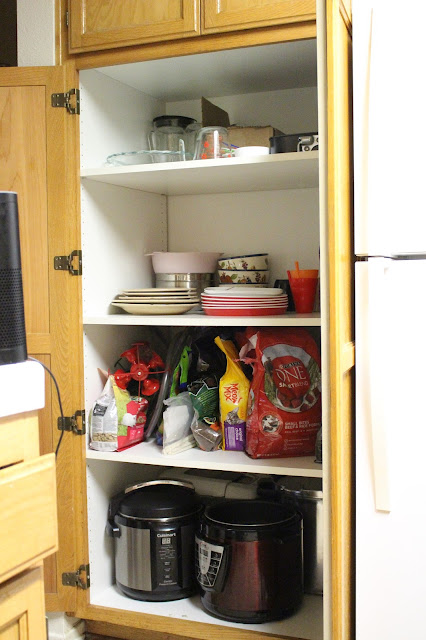 A full year has gone by since the overhaul of the kitchen and for the most part, while most of the things have stayed the same, some of the clutter has returned.   Maybe making a yearly cleaning is a good thing..   While not overwhelming, the shelves could benefit from having everything pulled out again, the surfaces wiped down, and everything reorganized. 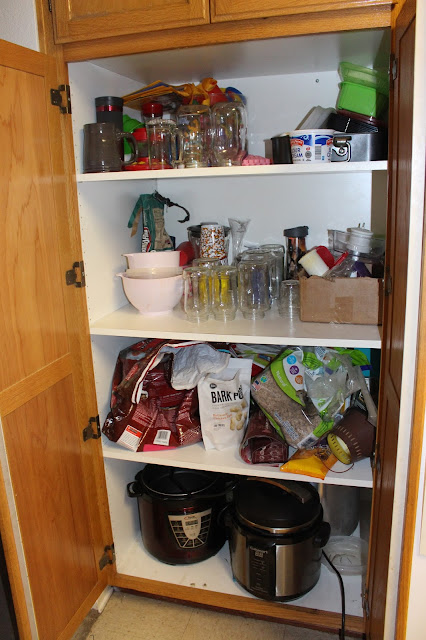 This is what the main food pantry looks like right before I go grocery shopping.  Yeah, it still looks pretty empty overall, since we don't use a whole lot of canned goods - mostly just tomatoes and beans.. 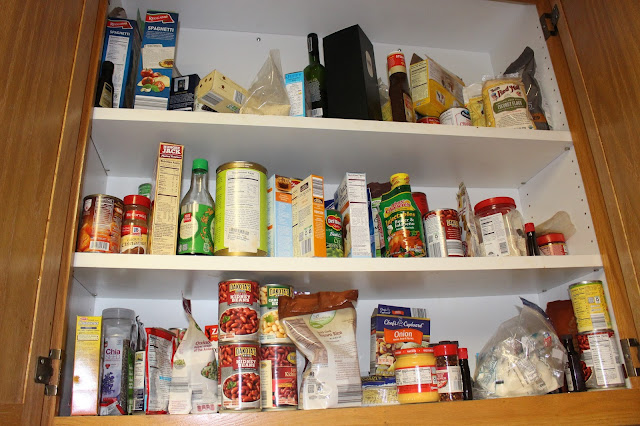 And yes, the tea drawer is still being used..  I've sworn off buying any more tea until I finished drinking a majority of what I already have and in te year, I have put a serious dent in my stash, but I still have a long way to go  lol 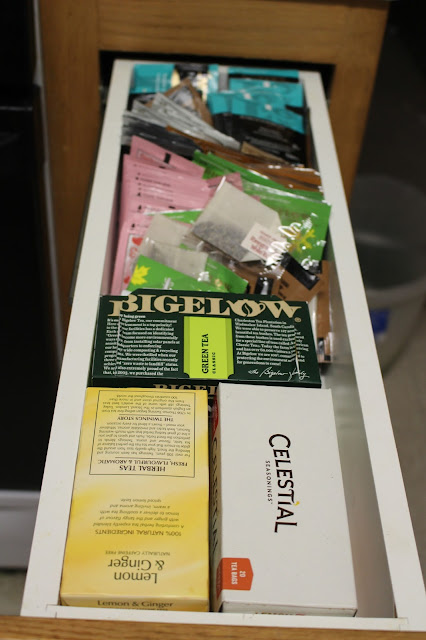 Well, there's the reorganized food pantry.. I wouldn't exactly say there's much different. I have to laugh, the canned pumpkin puree and the corned beef hash are the same cans from last year.  They're still good, so I guess I should use them.. LOL  I just don't cook out of this pantry that often as we typically use fresh ingredients every week 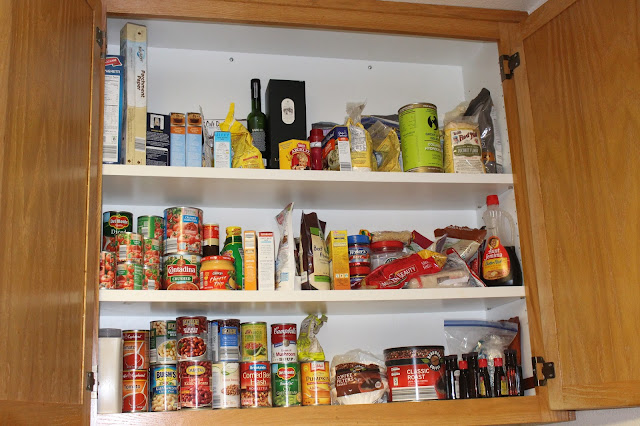 And here's what it looks like after being stocked full following grocery shopping..  We had to buy groceries for 20 days so now there' s a pretty decent amount of groceries in there.. LOL 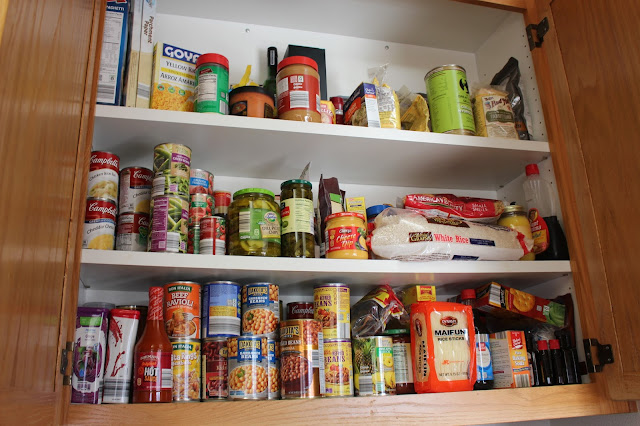 However, not everything can fit in this little space, so I had to have an overflow for bread, chips and broths.. LOL The other pantry (where I keep plates and cups) got a good wipe down and reorganization (where I discovered I have WAY too many bags of dog treats!!!) . 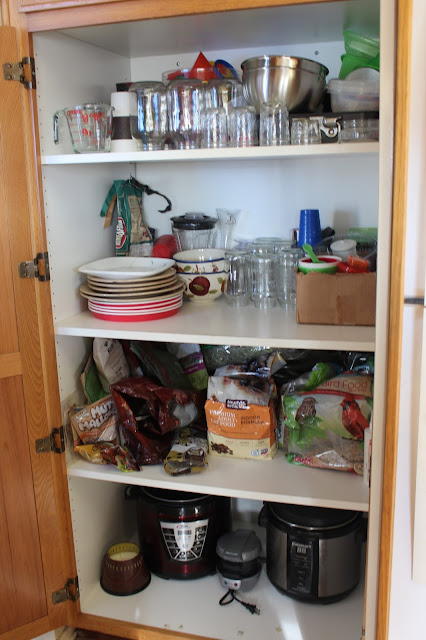 And the cabinet doors got a good wipe down both inside and out.  I couldn't believe how nasty the inside was as I never look at this area.  I guess I'l be adding them to my monthly rotation. 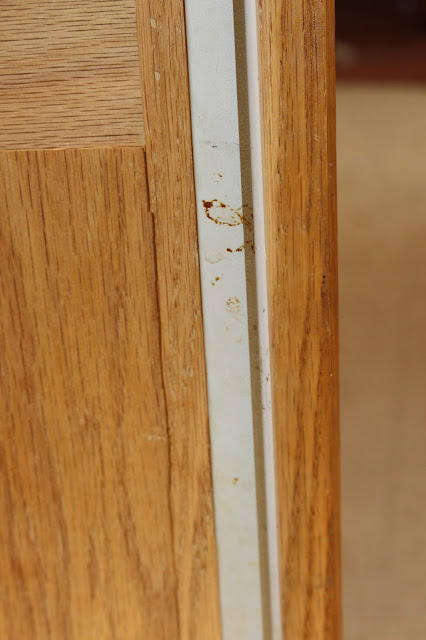 I guess next week we'll be tackling the other cabinets and drawers, so you'll get to see that area then :)  But for now, I'm pretty happy what we've done so far :)
Posted by Brenda Prince at 2:43 PM