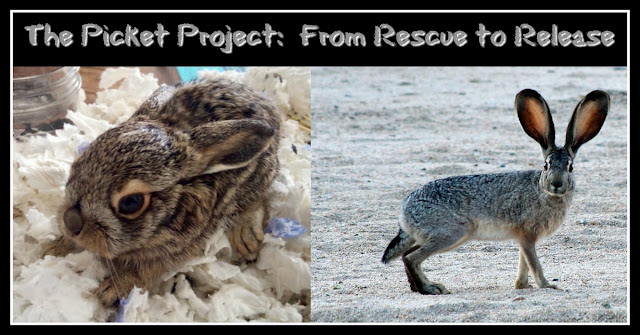 Each time I make one of these posts, it blows my mind how much Picket has changed since the last time I posted. Even from day to day, the amount she has grown is noticeable.

Picket is now roughly 6 weeks old.  While she is still drinking goats milk three times a day, she has also been eating solid foods and making the transition really well.  She gets a mixture of hay (mostly orchard and timothy) and rabbit blend (which has dehydrated fruits and pellets in it) as well as fresh veggies that I cut up for her. So far, she loves broccoli, grape tomatoes and watermelon rind the best.  We've also been giving her fresh sage from the back yard, as we know it does not have any chemicals on it.

Unfortunately, we did have a bit of an issue with the bunny hutch.  Unbeknownst to us, there was a sharp corner of chicken wire sticking out and of all of the the chicken wire, Picket decided to rub her nose against that particular piece, resulting in a fairly bad laceration on her nose.   We were able to treat the nose and avoided an infection and while the nose has healed nicely, she will have a cosmetic issue (Know anyone who does rhinoplasty on rabbits???)

All chicken wire on the hutch is now covered temporarily with heavy duty industrial tape (think Duct Tape only stronger and thicker) and I will eventually buy 1x2s or some molding to cover the edges of the chicken wire.  I'm also considering replacing the thin gauge chicken wire all together with a thicker, possibly coated, chicken.  For the time being, the tape is working fine as she is not biting or chewing on it (yet!).

At 6 weeks old, Picket is still a huge cuddle bunny.  After a good 20 minutes of running around "binkying" and going bunny rolls, she still climbs on mom to take a bit of a rest. She still has a fascination with the window and enjoys pacing back and forth on the window sill.  However, the outside seems to scare her - if I open the window, she will avoid the opened area completely and will only pace to the edge of the window itself but no further.  So long as the window is closed, she will pace the entire length of the sill. 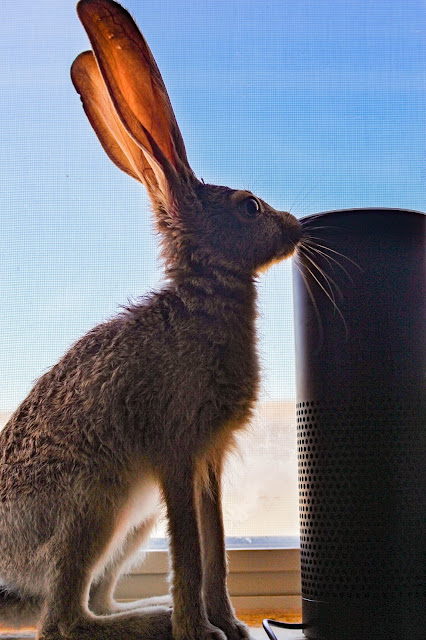 However, she dislikes when I close the window blinds to keep her from the window during the hottest part of the day.  Our window faces the sun during those times and we noticed she got extremely hot in the window.  So, no more window time during 1pm-4pm.

However, the more time goes on, the more it's looking like a release is not going to happen.  We were told that hares were unsocial, that they wouldn't bond with humans and that she would not want to be touched, held, ect.  Basically, we were told she would be a big butthead.  The opposite seems to be true. Maybe it's because she was so young when I found her in the road that day, or maybe she's just an expection to the rule, but Picket shows no sign of wanting to be in the wild. 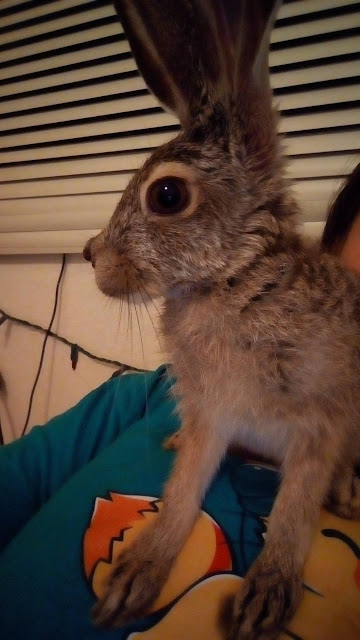 I've been asked by many people if we are planning on keeping her and my answer is that's up to Picket and what she wants.  For now, she seems to be very happy where she's at and she can stay as long as she wants.