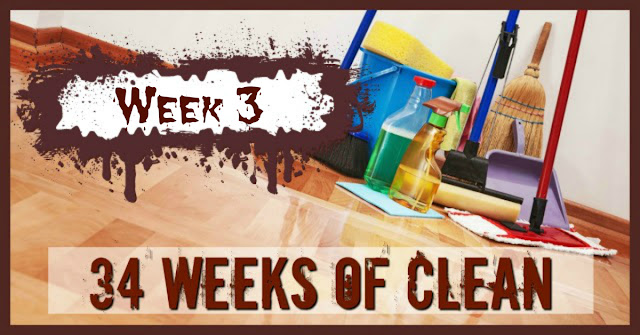 I'm jumping in a few weeks late here, but I'm jumping in non the less.  January means 34 weeks of clean..   And I always start and I get a few weeks in and I stop. I am such a failure. haha  If your 34 Weeks of Clean, it is a weekly cleaning "challenge" hosted by my friend Michele at Family, Faith, and Fridays .  Head over to her blog to learn more.
unfamiliar with the

This time around, however, I have motivation.  I've explained before, we're a military family.  Being a military family means we can get orders at any time and it's time to pack up and move wherever Uncle Sam sends us.    For the last 9 years, we have called this home, however, there's a very good chance that this year is the year that we will be calling a new state home.  (fingers crossed)..

One of the bad things about living in the same place for 9 years is that we have acquired a TON of stuff.  We are a family of five and each member of the family has their own stuff in this 1100 square foot, 3 bedroom, 2 bath home.  Most of this stuff, we just don't need and I surely don't want to pack it up and take it to our next duty station.

This means, it's the perfect time to use the 34 weeks of clean to break some of the tasks into smaller weekly jobs to help get a handle on everything and have a head start on the deep cleaning that will need to be done for our final move out.


To kick off the week,  went ahead and tackled the worst of our kitchen mess - the junk drawers.  A few years back, I did the 34 weeks of clean and at that time, I actually had four "junk" drawers.  I cleaned them out at that time and managed to re purpose two of them and have kept them from becoming junk drawers again..  However, my two other drawers have managed to become overflowing with junk.  They are the catch all for anything from small appliance manuals, batteries, keys, tools, ect. 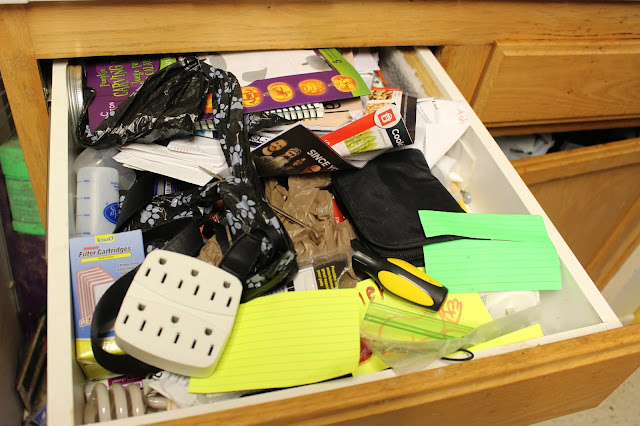 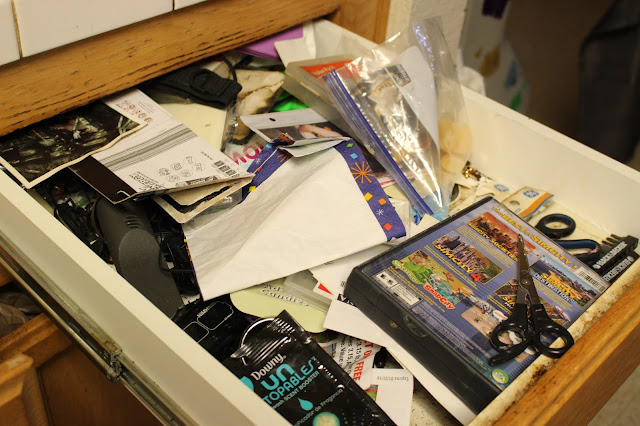 With trash bag in hand, it was time to tackle the mess..  Between receipts that were a few years old, fasteners of all sorts, jewelry, and coins, I managed to sort through everything, throw away anything that was not necessary, vacuumed out all the debris that found its way into the drawers, wipe down all the spilled coffee, ect. 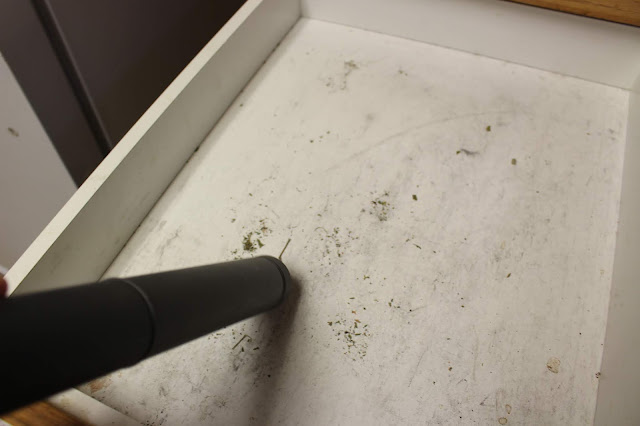 The drawers themselves were wiped down with magic eraser and then sanitized and only those items necessary were returned to the drawer and items such as jewelry was given to their owners and put away in a more appropriate place. 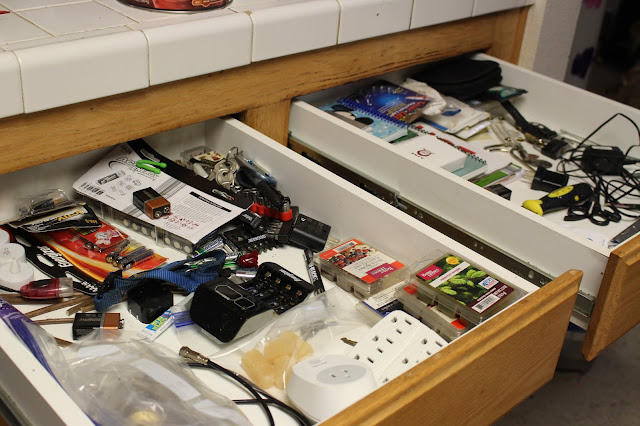 You might remember that I am addicted to tea.. I absolutely love hot teas.  I believe it was the first time I participated in the 34 weeks of clean that I actually cleaned out one of the junk drawers and turned in to my tea drawer.  That drawer is still my tea drawer although now I also keep my pot holders and my measuring spoons in this drawer as well. 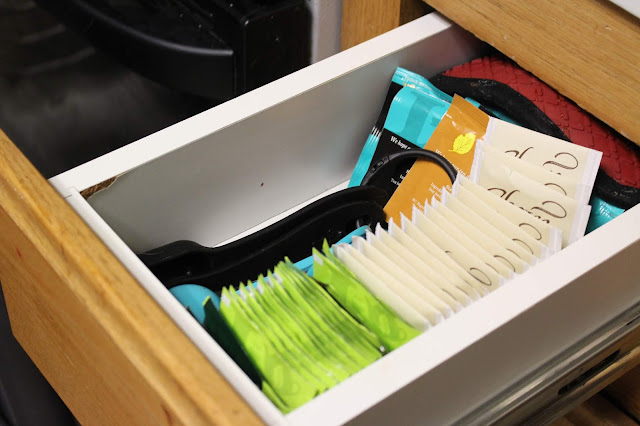 After drawers it was time to tackle the cabinets. 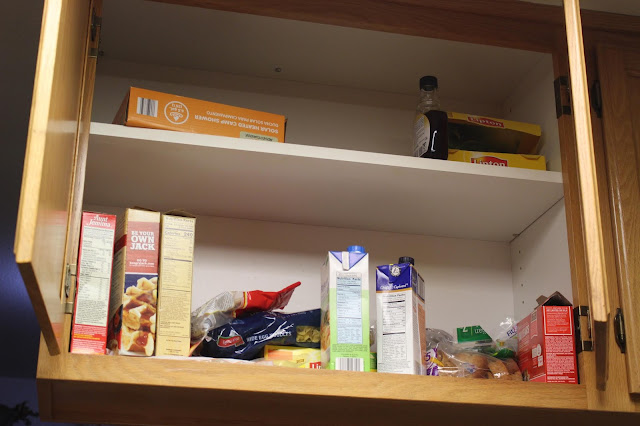 I'll be honest, that top shelf, I haven't taken out of the cabinet and wiped down in a while, as I just don't use it. I can't reach anything up there even when standing on a step stool.  But I pulled it down and was totally disgusted at what I found.  I don't know if was nicotine from years of smoking (I quite over a year ago) or if it was just kitchen funk, but it was disgusting.  That shelf got a throughout wipe down and sprayed with sanitize. lol 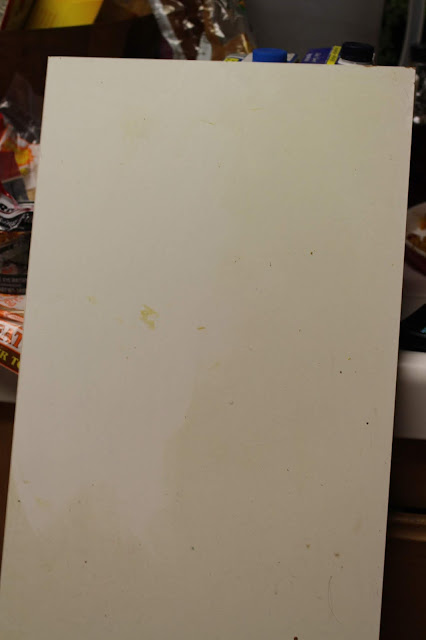 The camp shower that was on the top shelf was relocated to where camping equipment is kept in our utility room. 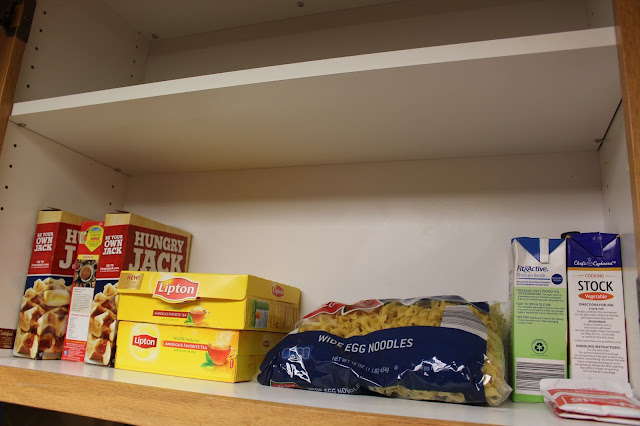 I just love finding random produce stickers on my cabinets.  My husband seems to think they should go on the front of the cabinets.. LOL 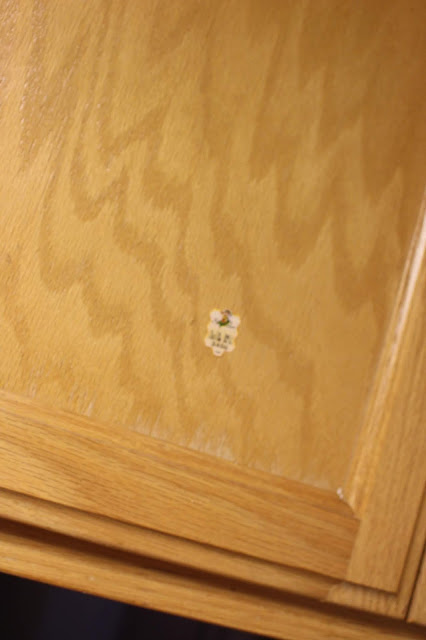 This is my husbands cabinet, for the most part..   He keeps most of his mead making supplies on the top shelf.  However, I do not understand why there were so many empty beer bottles and cans in this cabinet.  There was also the blades for a blender that got broken probably three years ago..

After asking him in a text message if there was a particular reason why the beer cans/bottles were saved and being told "decorations", I told him they were being tossed. LOL 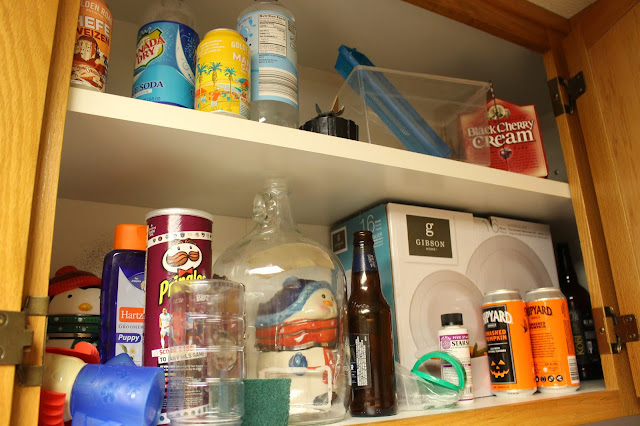 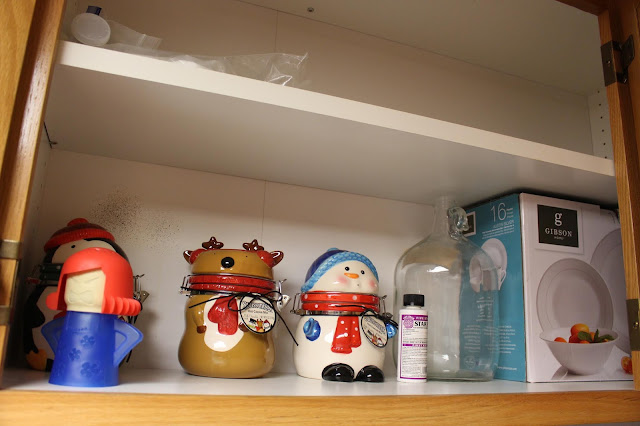 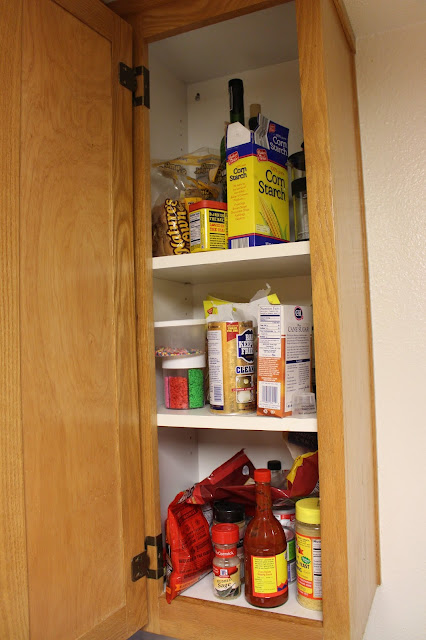 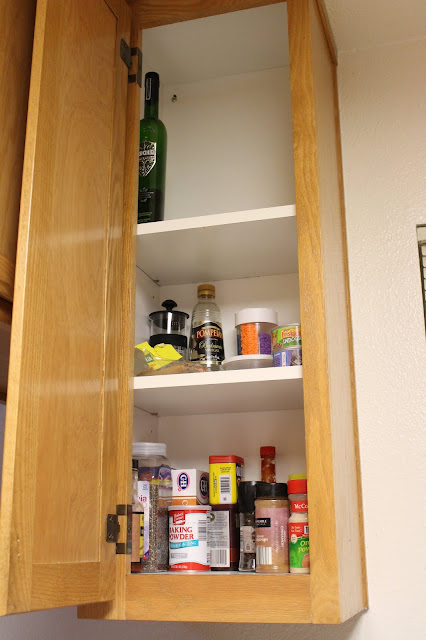 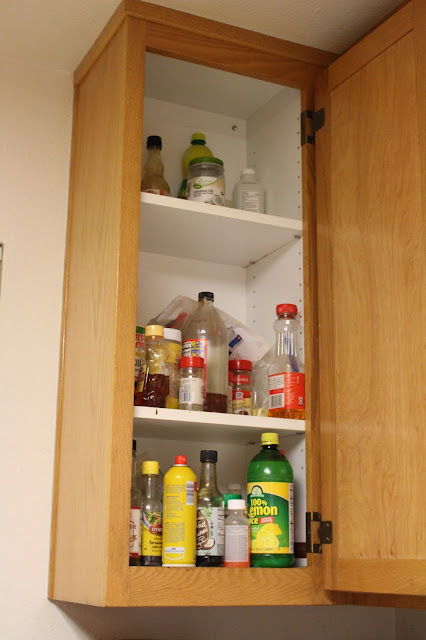 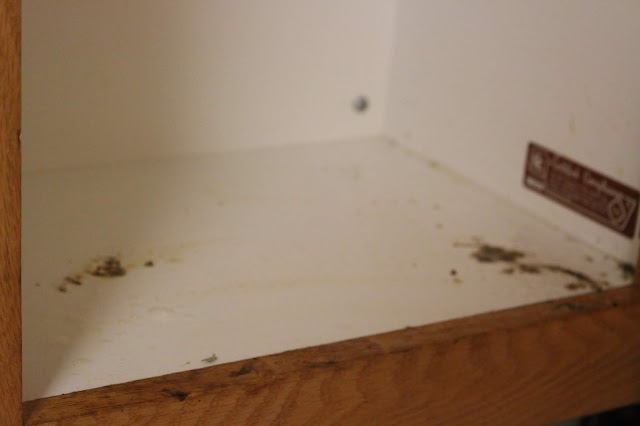 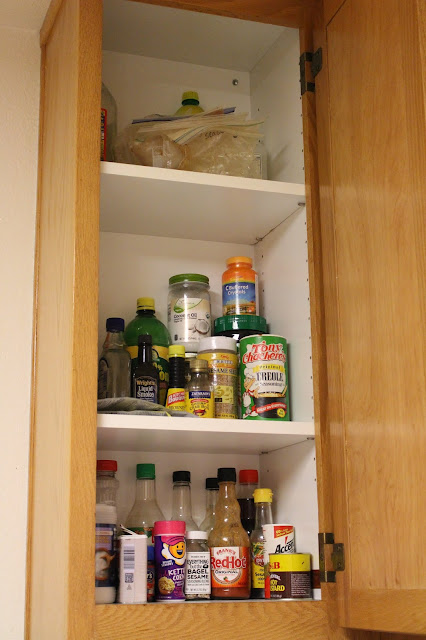 This cabinet is one that I don't mess with that often beyond just the items at the very front bottom shelf for breakfast food, bread crumbs and popcorn.  I ended up throwing most of the stuff in this cabinet away, from two almost empty containers of TANG (one of which expired in 2014), old sippy cups, broken glassware and even a drink pitcher that we didn't even realize we had. 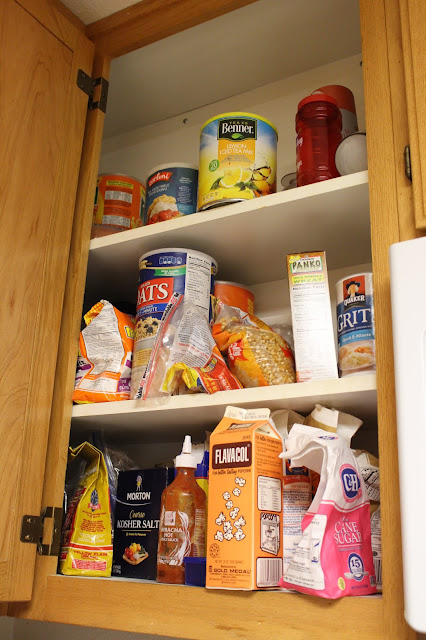 After taking everything out of the cabinet, I found yet another couple of really nasty shelves. I honestly can't remember ever bringing these two shelves out of the cabinet but I did and gave them a really great scrubbing with dawn detergent and a sponge. 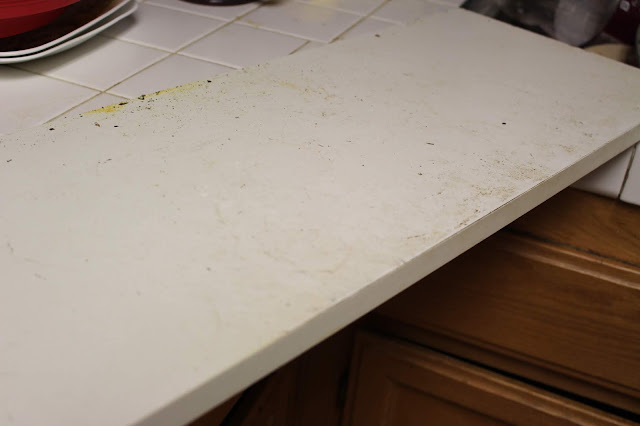 I also found gunk built up on the inside of the cabinet, probably grease from hands.  That all got scrubbed off as well, and the cabinet doors got got a good wipe down as well. 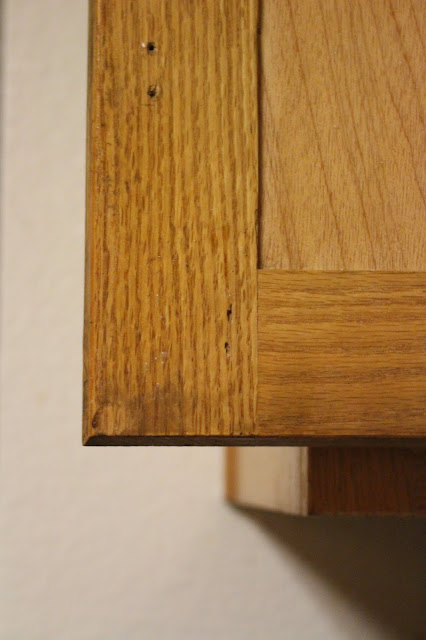 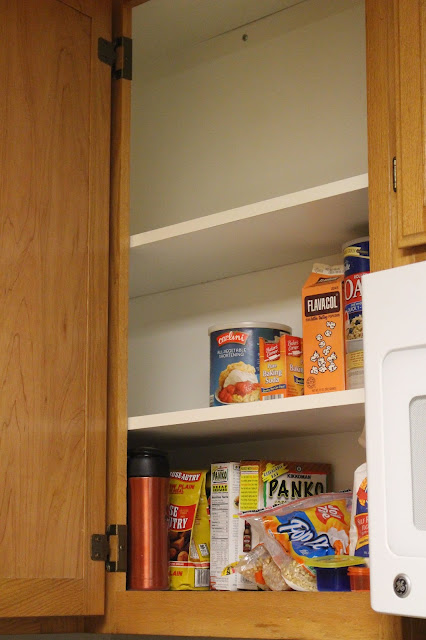 Final cabinet.  My Kombucha cabinet.  Right now, I'm needing to make a brew so my scobies are just hanging out in their hotel. I'll probably make a brew tomorrow and start a new batch.  This cabinet also contains essential oils as well as dietary supplements that we use when we are sick.  Also, our cartridges for our Cirkul water bottles are kept here. 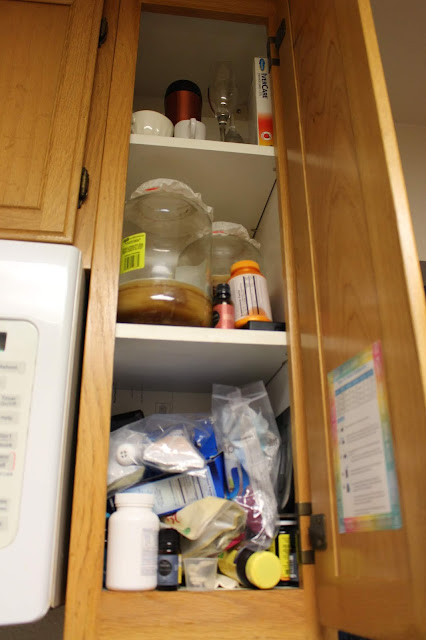 Thankfully, these shelves see alot more use than the other ones and they get wiped down often (especially since I brew Kombucha in this cabinet) so I clean and sanitize that shelf in particular every time I start a new brew.  I did however, toss alot of stuff not needed and gave everything a really good wipe down and rearranged everything. 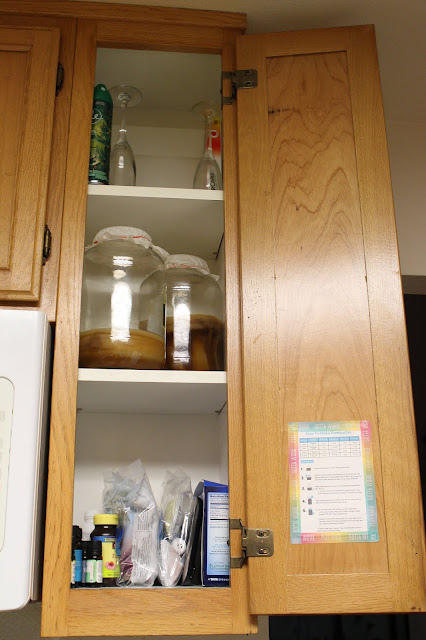 After that, I am DONE.. lol  With all the cabinets and the drawers cleaned I'm wiped out. I believe I will pace myself throughout the week next week rather than waiting for the weekend to get to work. LOL  I'm too old.. lol
Posted by Brenda Prince at 12:46 AM