This week, we have been continuing with your discussions regarding Ancient Egypt. Yesterday we discussed Egypt being broken into an Upper and Lower Egypt which the kids got a real kick out of. We had learned about the cardinal directions earlier this school year so the kids knew N,S,E and W. So yesterday when we learned that Upper Egypt was actually the southern part of the country and Lower was the Northern part, they found it to be rather silly. We also studied that the two regions of Egypt was ruled by two Kings, the Red Crown King and the White Crown King but that the two battled because both wanted to rule the entire country. The kids learned that the White Crowned King (King Narmer) won the battle and became the first Pharaoh of Egypt.   After our history lesson, the kids worked on their reading (Ashleigh read three books aloud) and Garrett worked on his math skills.

Today we reviewed what we learned yesterday in our history lesson and I was very surprised that the kids retained pretty much everything we covered. Lessons were a bit harder today because both kids were excited. I had bought a second hand globe and the kids were very interested in it. So we started our lessons today discussing how the globe was a map of the Earth, much like the map we already used for our geography, but that it was round to show how the continents were placed the Earth's surface.  We had a blast finding all the countries we have studied so far as well as looking at countries we haven't explored yet. What they don't know just yet is that the globe lights up and in a dark room becomes a night skies globe which will come in handy when we return to more in depth Astronomy studies in a few months.  With exploration of the globe finished, we returned to our study of Egypt. We reviewed what we've learned and I was shocked that the kids even remembered King Narmer's name which is better than even Mom did.. 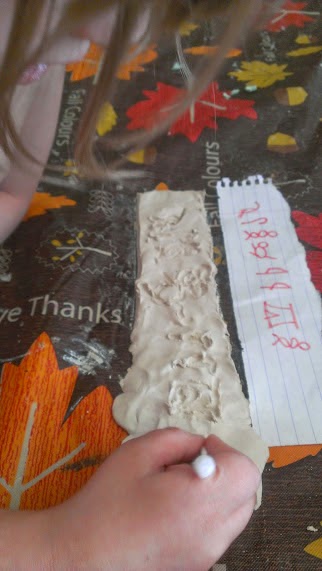 Our lesson today was about cuneiform, hieroglyphics and the making of papyrus.  Honestly, the kids weren't really excited about today's history lesson, Garrett wanted to work on math instead and Ashleigh wanted to play on her Leappad but we managed to get through the lesson. For our fun activity, I wrote out both of their names in hieroglyphs on strips of paper and they were able to use a q-tip to copy their names into clay. This proved to work out really well and both kids had a blast. Ashleigh did a bit of embellishment on her "L" which was to be a simple outline of a lion but turned out to be a very cartoonish cat but over all, this turned out to be a good project for them. These will be allowed to dry for a few days before we paint them.

We then worked on reading (We're working our way through the level 2 Bob books) and flash cards for math, then both kids worked on math skills with their Leap Pads.

The bird nest is near completion and we should have eggs here in the next day or so.  The kids are not allowed outside to the nest as we don't want to disturb the parents but each day they ask for me to take a photo of the nest so they can see the progress better than what they can view from the window. (Our window is rather cloudy because of the heat here). Yesterday the nest was being lined with down feathers. Today the residents have made a top layer of nest over 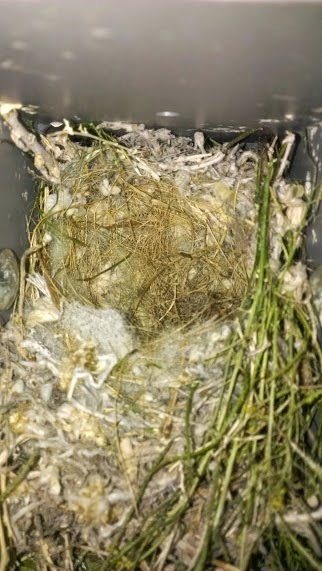 the down. The kids told me this morning that we had eggs but they were mistaken but it shouldn't be long. They are so excited. Once we have eggs, we'll do a quick lesson about the parts of the egg and I have a Magic School Bus episode lined up to discuss the development of the chick inside.
Posted by Brenda Prince at 3:02 PM