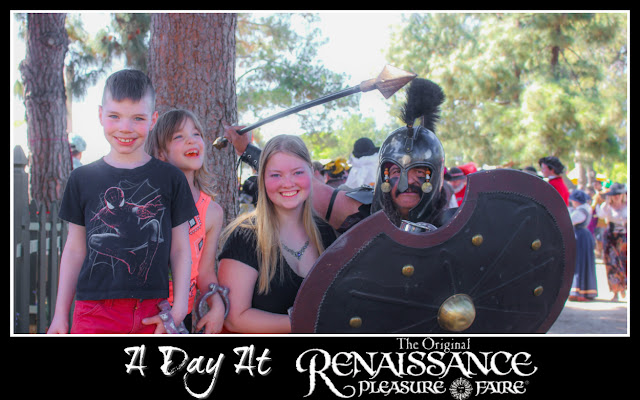 This past weekend, we loaded up in the car and headed to Irwindale, California to spend the day at the Original Renaissance Pleasure Faire.   While it's not near as awesome as the Texas Renaissance Festival back home in Plantersville, Texas, it is a decent substitute and a fun way to get out of the house for the day. 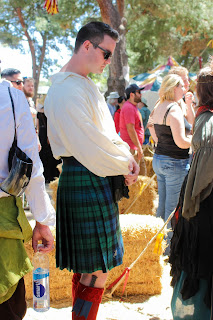 This year, Charles was the only one who got dressed up as it was decided he would wear his kilt.  The night before, we looked everywhere for the Jacobite style shirt that we had bought him the last time we went to the Pleasure Faire.  We tore our closet completely apart searching for it and after an hour, we gave up.  I just happened to look behind one of Alyssa's dresses hanging in our closet and found the shirt had fallen off it's hanger and was between the wall and the dress.. So, yeah, Charles got to wear his shirt.. lol

Since Charles has begun wearing a kilt, it has made us very aware when we see others wearing a kilt.  You can always tell when someone wearing a kilt actually wears a kilt on a regular basis as part of their Scottish ancestry or if they are wearing it just as a costume and they think it looks cool.   Charles wears his as part of his heritage and as such, he tries to make sure all proper rules to wearing it is observed.

When we first walked into the fair, there were a few displays set up to watch house people did various crafts during the Renaissance time.  The first guy we saw was working a shuttle loom and the kids got to watch as he ran the shuttle back and forth through the loom and then switched between the warp and weft.  It was really neat to watch as we know that the tartan that Charlie's kit is made with was produced much the same way in Scotland by Lochcarron.  Since the kids were so interested in what he was doing, he allowed them to both come up beyond the fencing area to get a closer look as he worked the shuttle and then he showed them how he worked the pedals with his feet.

Next there was a woman using a peg loom to make a really thick rug.  This was really neat (and I really wish I had gotten pictures of all of these displays) and really made me think I might have to make my own peg loom and make some of those beautiful thick rugs. They were so plush and warm, and I can only imagine walking on them would be like walking on a cloud.   She allowed the kids to touch a sample of what the finished product would be like.

The last display was a woman making thread with a spinning wheel.  Of course, the only exposure the kids have ever had to a spinning wheel is in watching Sleeping Beauty.  Once again, since the kids were showing so much interest in what she was doing, she allowed them to come closer and feel the unspun silk.  First, she just told the kids it was made from "bug spit" but when they realized it was silk threads, Ashleigh quickly remembered that silk came from the silkworm because we had studied about the Zhou dynasty and silk making.  I think the woman was honestly pretty impressed that Ash knew that.


We ended up watching a couple of different shows - the first being the Tortuga Twins comedy show.  This is three guys, who are obviously not twins, who do a rather PG-13 interpretation of Robin Hood.  While many of the more "adult" jokes were over the kids heads, there really wasn't much to this show to hold their attention and they were rather bored.  Charles, Alyssa and I did enjoy it for the most part as they were pretty funny but it's not something I would care to see again.

Garrett, who can hear me opening a piece of candy from the other side of the house, instantly heard bagpipes and wanted to find them. None of us heard them at all until we were much closer but sure enough, he was right, there was a bag pip show going on.   We were very lucky to catch "The Freestylers of Piping".  WOW!!!   Usually, when you think Bagpipes, you might think of Amazing Grace..  However, this pipe group is like nothing you've ever seen.  I can only call it a fusion of Punjabi meets Scotland.   It was absolutely amazing!!   Afterwards, we went up to speak to one of the young men who played the pipes so that Garrett could see them and we talked to him for a few moments.. A really nice young man, We ended up buying one of their CD's for Garrett (Garrett wants to learn to play the Pipes).

Then, of course, there's all the wonderful costumes..  We saw so many.  The kids would get so excited when they saw something they recognized or just something that caught their fancy.


And while we missed Bill and Ted, the Kids DID get to check out their "Totally Rad" time travel machine and meet the one and only Beethoven.  I think the time traveling got to poor Ludwig though, as he tried to play Fur Elise for us and it was really terrible LOL   However, Ashleigh did think it was really cool to meet Beethoven and tell him how much she likes his music (However, she told me two days later that she knew that really wasn't Beethoven.. lol)


All in all, the kids had a great time.  I think we will start making the Pleasure Faire a yearly thing for us as it's really such a unique experience each and every time we get to go..

And hopefully, next month, we will head over to Costa Mesa for Scottish Fest :)
Posted by Brenda Prince at 1:48 AM