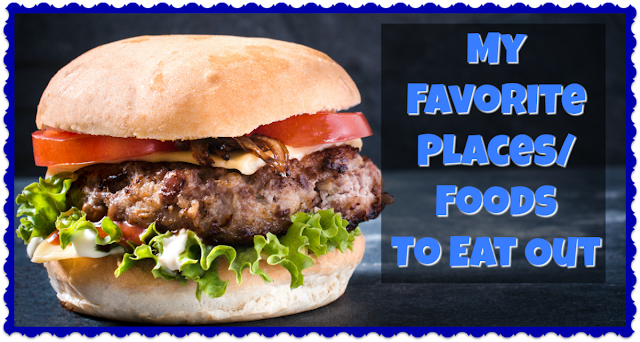 I admit it.. We eat out far more than we probably should..  (On average, once every 2 weeks, sometimes twice)..  There's just something about going out to a nice restaurant on a date or enjoying a nice greasy burger that is very satisfying.

For this week's 52 Lists, we were asked to list our favorite places or foods to eat out..  Probably not the best list to think about when my belly is already rumbling from the wonderful smell of country ribs cooking in the slow cooker ;)    It's also one of those lists where I have to debate whether I list the places that are here in California where we are now or do I put my all time favorite places, which might include restaurants back at home or even in places where we have lived.. LOL

Sit Down Restaurants
Bomas at the Animal Kingdom Lodge - I HAVE to eat here everytime we go to Disney World
Malhi's Indian Cuisine - Located in Palmdale, California - The Mixed Tandoori is the best I've ever had.
Taco Rey - A family owned Mexican restaurant in Nederland, Texas.. Tex Mex at it's finest and I have never found anything comparable since leaving home.
Sartin's - Another hometown eatery in Beaumont, Texas that served platter service with all you can eat clams, catfish, bbq crabs and shrimp.
Fresco II - a Mediterranean restaurant here in California that hubby and I enjoy for date night

Other Mentions
Nick's Grocery - This lil mom/pops grocery store in Port Arthur, Texas has the ABSOLUTE best Boudain, even better than anything in Louisiana.
The Boudain Hut - Noticing a trend here?  Great Boudain in this little hole in the wall bar/restaurant in Port Arthur
Larry's French Market - Another family owned grocery store in Groves, Texas that has a small restaurant and dance floor inside - they serve the best boiled crawfish along with, yup, you guessed it, Boudain!!!

Posted by Brenda Prince at 3:42 PM