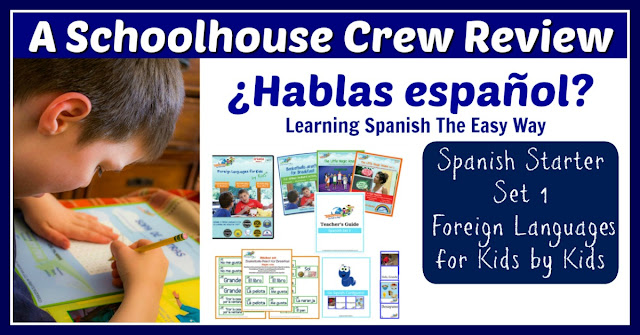 Hablas espanol?  I took two years of it in high school and I'll be honestly, I learned very little of it.

Studies show that children are more likely to have success in learning a second language when they are exposed to it at an early age.  Other studies also show that it's much easier to learn a language when they are immersed into it rather than from a structural teaching style.  This is the belief of Foreign Languages For Kids by Kids believes when they created their Spanish Starter Set 1.  Garrett (and Ashleigh as well) have been using the Spanish Starter Kit 1 for the last few weeks and we have seen much success in their retention and understanding. 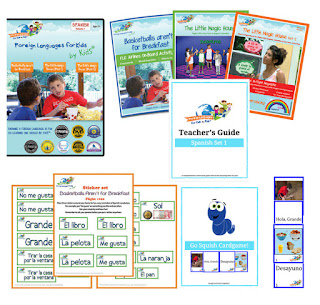 The DVD video consists of three videos, each roughly 15 minutes long. Students are told that these are "in flight movies" being shown on a flight to a spanish speaking country - the first video is travelling from Washington DC to Lima, Peru, the 2nd is travelling from Lima to Bogata, Columbia and the 3rd is from Bogata to San Jose, Costa Rica.  In each video, viewers observe a conversation and situation that immerses them in the Spanish language in a real life setting involving the activities of a family as they go about their day. The video we concentrated on the most, Basketballs Aren't For Breakfast allows students to watch the interaction between three brothers and their mother as they go about their morning breakfast routine as the students learn the Spanish words for many common breakfast foods, items such as books and basketballs, terms such as "I like" and "Where is" and "Thank you/You're Welcome".

The Guide for Teachers and Parents is a  booklet that includes lessons that take roughly 45 minutes. Each video has it's own Teacher's guide with lessons specific to it's particular video. These lessons expand on the vocabulary that students learn from watching the videos. A knowledge of the Spanish language is not necessary for parents to teach the program, as the guide walks parents through everything they need to teach the lesson to their students.   In addition with the Spanish lesson, activities are provided that expand on what has been learned as well as to familiarize students with the country the flight is heading to.  Each lesson also lets the parents know when it's time to open the student workbook and complete an activity page.  A really cute full color certificate for completion of each video is included at the end of the guide.

In addition to the Teachers/Parents guide, each video has it's own individual Student workbook.  These student workbooks are full color and include activities that reinforce what the student is learning both in the videos and the lessons, as well as engaging culture lessons.  The activities include things like crosswords and word searches as well as matching and fill in the blank style questions and feature images from the video that the students are already familiar with.

Originally, I planed on only using this program with Garrett, as Ashleigh has already been working independently with her Latin lessons. However, the very first time I turned the video on for Garrett, Ashleigh wanted to watch as well.   I found that the short videos were perfect to turn on for the kids while I made their lunch each day and they quickly looked forward to watching them each day.

Per the teacher's guides suggestion, I did not explain anything about the video to them and instead told them to just watch the video, listen to the interaction with boys, and see what words they could figure out.  The first time they watched the video, they were pretty confused as to what was going on.  As they continued to watch the video daily, they quickly started figuring out what the Spanish words they were being exposed to translated to in English. This became very apparent when about two weeks into the program, my husband was heading to the grocery store and Ashleigh asked him to pick her up some "pequenas manzanas" as she preferred them to "grande manzanas" (Small apples as opposed to large apples).

Since we were only going to use the workbook with one student, we used them with Garrett. Both kids were able to participate in the lessons and have learned so much already.  We were also able to expand on the lessons about South America as we included the Olympics in Brazil with our lessons.  While the teachers guide recommend doing one lesson twice a week, we are moving through the lessons a bit slower - Garrett has pretty much memorized the first video but I am finding that he
struggles with the lessons if we try to do one lesson a week. Instead we concentrate on the lesson for two weeks at a time and this seems to work perfect for him.  Since there is no time constraints on the program unlike an online program, this allows us to take our time so that I know Garrett is retaining the information rather than feeling rushed to complete it on schedule.

In the past, we have used an online language program and were not terribly impressed with it.  I did not feel that the children were learning or retaining anything from the lessons and honestly, if I were to ask them anything in regards to those lessons, they stare at me like I have a third eye.  This Spanish program is different!!  It's engaging, it keeps the kids interested and they are even using what they are learning outside of school time.  If the kids misplace one of their toys, hearing them calling out "Donde?" is pretty common.  When I ask what they want for breakfast or lunch, they will tell me "Me gusta (fill in food) or Ashleigh commonly tells me "No me gusta huevos".  In the few weeks that we have been using this program, I can say that I am VERY impressed.  My oldest daughter has taken Spanish in public high school and I can honestly say that the kids have learned the language much faster and efficiently in a couple of months than that she has in a year of instruction. 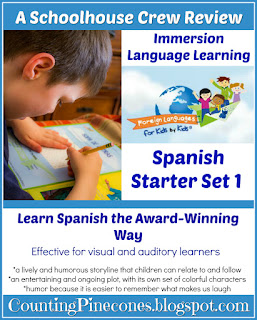 Fore more information about Foreign Language for Kids by Kids and their Spanish program, including the Spanish Starter Set 1, be sure to visit either their website or find them on Facebook at https://www.facebook.com/ForeignLanguagesForKidsByKids.


Foreign Languages for Kids by Kids was very generous and provided 90 members of the Review Crew with their Spanish Starter Set 1 for us to review. Be sure to click the banner below and read the other crew members reviews and see how they used it with their students.

Posted by Brenda Prince at 6:43 PM