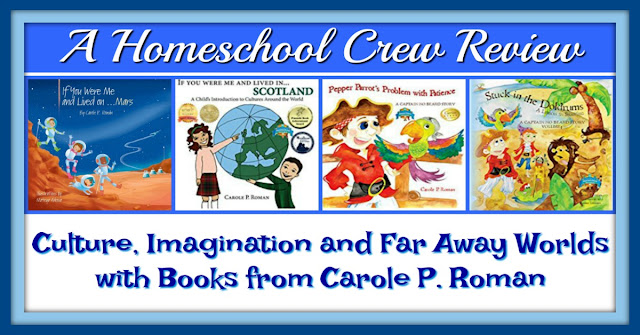 In our family, we love reading books that take the imagination to someplace other than the deserts of California.  Whether it's reading something educational like about other countries or time periods or just a story book that takes the kids to an imaginary world, if a story is well written then it will often become a family favorite.  Many of the books that we have read in the past have been written by author Carole P. Roman as many of her books are available on our Kindles. We've really enjoyed reading her "If You Were Me and Lived In..." historical series so when we were given the opportunity to read and review her Cultural series, we couldn't wait to get our hands on them.

For this review, we were given the following books:

Pepper Parrot's Problem with Patience: A Captain No Beard Story 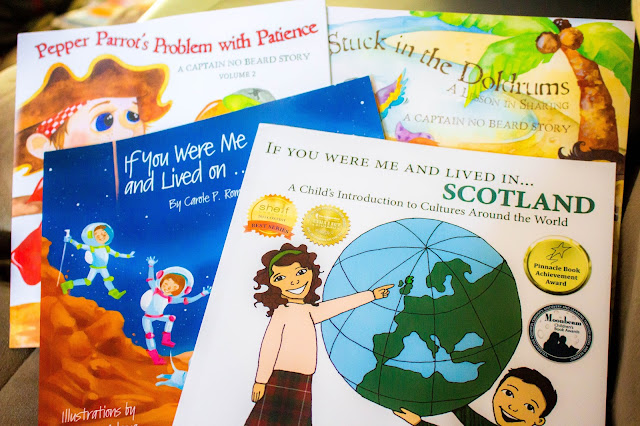 Carole P. Roman is an award winning author who began writing books after being dared to do so by her son.  After writing her first book based on a video game that she liked to play, she has now written over 35 books.  The "If You Were Me and Lived in..." series allows elementary grade readers to explore what life would be like for people living around the world at various periods of time.  Describing clothing, food, education, games, and religion for each time period, readers are introduced to cultures that differ greatly from our own.  She also has a similar series of non-fiction books for older readers.  Her books, both fiction and non fiction, have won over 100 awards.

If You Were Me and Lived in...Scotland is a 30 page, full color, softback book for children and is part of the Cultural series. While written for children ages 4-8 years of age to understand, there's plenty of information to make it interesting for older readers.

We were really excited to receive this book. Our family is very interested in our ancestry and a few years ago we began to connect with our Scottish roots from my husband's side of the family.  We've been talking about a trip to Scotland in the next few years so I thought this book would be a perfect introduction for the kids.   Much of what was covered in the book we were already familiar with, such as the wearing of kilts and the various tartans worn but the kids learned that the official animal of Scotland is the unicorn and that the gaelic word for school is sgoil.

As we've come to expect from Carole P. Roman books, the illustrations are vibrant, eye catching, and very well done. The text is informative but not overwhelming and includes pronunciations for words that may be unfamiliar.  I really like the illustrator used a mix of illustration and photographs together. 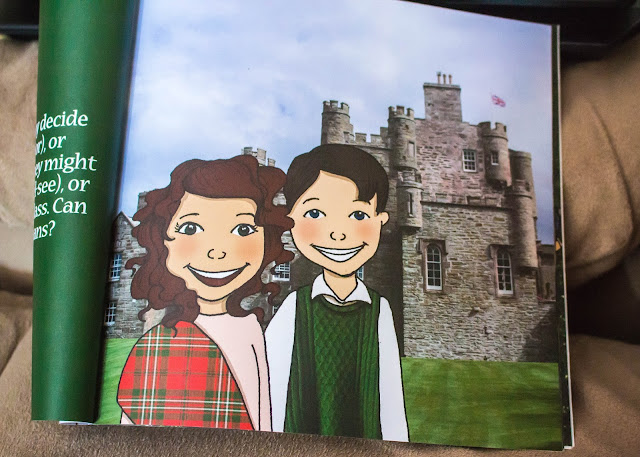 At the back of the book is a 5 page Pronunciation Guide that includes the proper pronunciation of many of the words and terms used in the book as well as definitions in easy to understand terminology.  For example, for the word "plaids", the guide directs the reader to pronounce the word as pl-ades and defines it as "a design on material that identifies families".

The second book, If You Were Me and Lived on...Mars was a huge hit with the kids.  Who doesn't dream about what it would be to live on another planet?  With this book, kids are invited to use their imagination and picture what life would be like on the red planet.  Through this book, they are reminded that things are vastly different from living here on Earth, from the difference in gravity, the difference in atmosphere and what would be necessary to live in that environment. 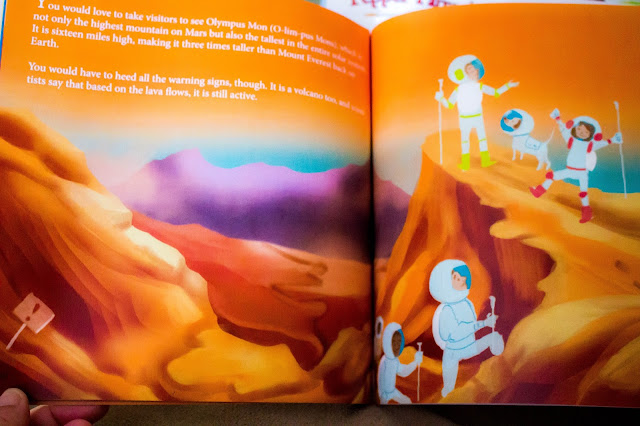 This book is also soft covered and filled with pages of bright illustrations of what it would be like to live on Mars. This book is 43 pages long and includes a six-page pronunciation guide that includes terms and words used throughout the book. Because this book is written at a slightly higher reading level than the Scotland book, the definitions in this book cover much more than just terms that relate to Mars. For example - some readers may be unaware of what a mechanic is or what the meaning of irregular and so the book provides a definition of these words along with the pronunciation.

In addition to the Pronunciation Guide, the book once again includes pronunciations in the text when readers first encounter a word they may be unfamiliar with. 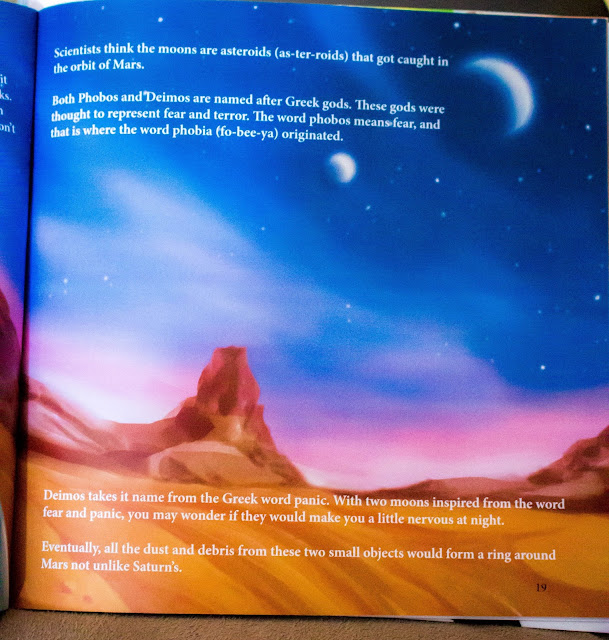 The other two books that we received are both from the Captian No Beard series, which is a series of story books that feature a young pirate named Captian No Beard, his First Mate (and sister) Hallie and his crew that consists of a menagerie of animals.  These books each teach a lesson and these two books were about patience and controlling your temper as well as treating your friends with respect and not being bossy as well as forgiveness.

In the first book, Pepper Parrot's Problem with Patience, readers meet Pepper the Parrot, a new member of Captain No Beard's crew. Pepper does not know her left from her right which leads to lessons about teasing, taking the time to teach others and about controlling your temper when you become frustrated.  There's also talk about being prepared ahead of time in the case of an emergency. 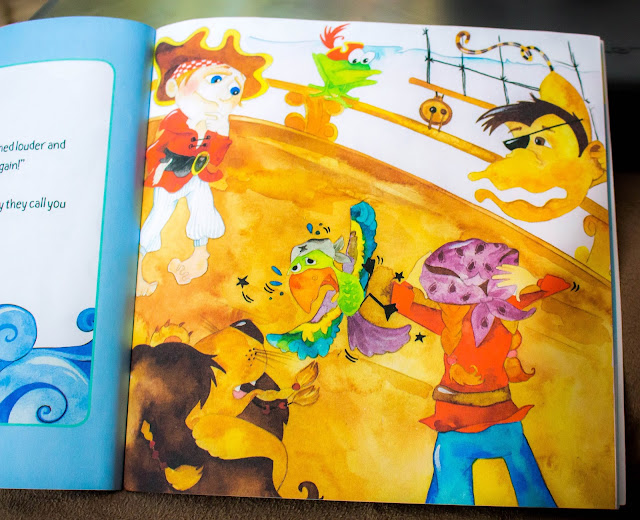 The second book, Stuck in the Doldrums, has Captian No Beard and his crew stranded on an island and finding ways to entertain themselves.  However, Captain No Beard has appeared to allow his position as Captian to go to his head, resulting in him bossing the others around. However, when he finds himself in a dangerous situation, readers are given a lesson about helping friends in need, even when they have been mean to them. 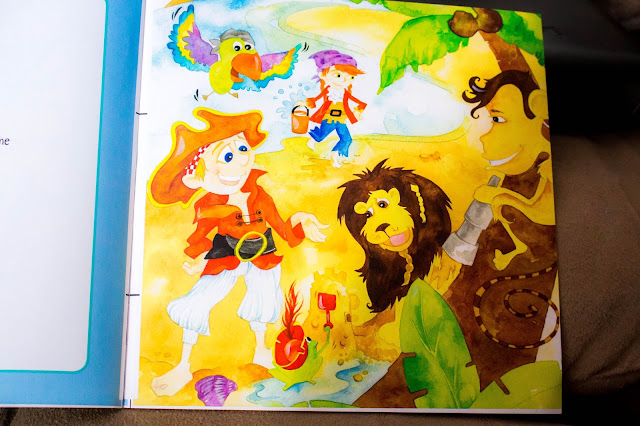 Both of these books were extremely cute and I loved the teachable moments found in them. These would be great books to include when working on lessons on Character Building and create a great platform for discussion with smaller children in regards to bad behavior and why it is wrong.

Even though the kids are a bit older than the targeted age, these were still very enjoyable for them.  Ashleigh enjoyed reading the Captain No Beard books independently and enjoyed all the animal characters in them.  Each book is great for inspiring imagination as well as provide educational learning for younger readers and will be a treasured addition to any home library and will appeal to both boys and girls (even the Captian No Beard series features a strong female character, Hallie). 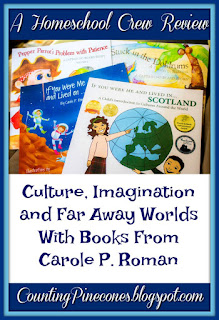 Posted by Brenda Prince at 6:36 PM