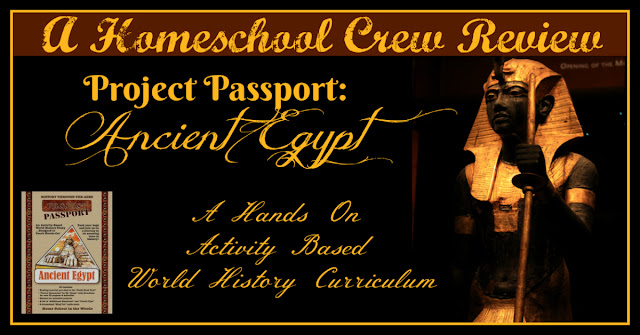 A few weeks ago, the kids and I began tackling the Project Passport: Ancient Egypt unit study from Home School in the Woods.  If you will recall earlier this year, we did a review on the folder game "Tomb Dash!" which was one of the stand-alone Á La Carte  products from Home School in the Woods.  The kids didn't do that well with the trivia that went along with the game when we reviewed it back in March.  The folder game as well as the trivia questions are part of the larger Ancient Egypt study and the kids (especially Ashleigh) wanted to do this particular unit because they want to be able to beat their older sister at "Tomb Dash!".  As luck would have it, we were given the opportunity to review it :) 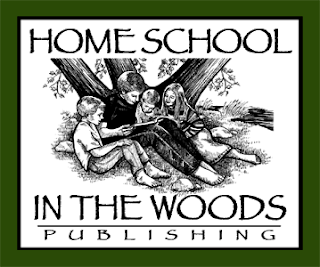 The Ancient Egypt study, like each of the studies in the Project Passport World History Studies, is designed to take your student on a fully immersive trip through various "stops".  Each of these stops focuses on one particular aspect of Egyptian history such as the hierarchy of Egyptian government, Egyptian weapons and warfare, the Pharaohs and their dynasties, everyday life, culture and religious beliefs of the time. 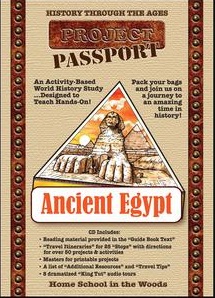 The Egyptian study contains 25 individual stops.  At each of these stops, a short narration is provided
that introduces the student to the material for the topic.  This narration, called the "Guide Book Text", is between 2-4 pages, depending on the topic and is written like a script that a travel guide would give to an audience.  While very factual, it's written in an entertaining manner instead of in a textbook format.   After listening to the reading for the stop, students then work on different activities that reinforce what they learned about in the text.  A few stops even have Audio Tours where students listen to an included MP3 file where a "field guild" describes events or locations as if an actual visit was taking place.

In addition to the text and activities, an included Travel Itinerary in included for each stop and contains the instructions for completing each of the projects .   From a teacher standpoint, this is one of my favorite things about this curriculum as I can print this out and use it as a check off to make sure that I have covered everything necessary. The itinerary lets me know  when the kids need to add a location on their maps or add an event to their timeline, as well as what needs to be printed out for the stop's activities. 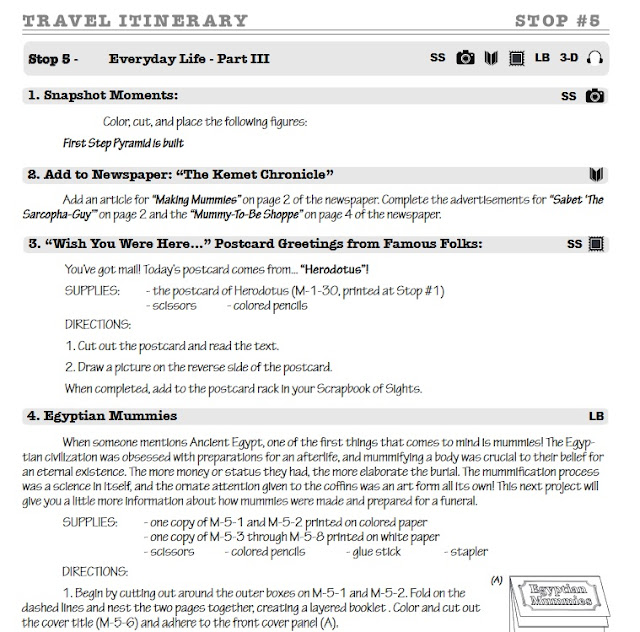 When using the digital downloadable version of the Project Passport, the entire curriculum is downloaded directly into a file on the computer.  A file entitled "Start.html" allows the user to click on the link and have the entire curriculum load up as a webpage in your default browser.  The Digital Edition is entirely browser based - once the files are downloaded you do not have to have an internet connection as all files are located on your computer.   Each of these files are saved as PDF's on your computer and are extremely easy to access and print out for binders.  The entire file for the Ancient Egypt study only took up 323 MB of hard drive space.  However, for those who prefer a physical copy of the unit study, Home School in the Woods does provide the option of ordering a physical CD.

One of the major highlights of using this particular study unit is that your student will end up with a binder of projects that resembled a scrapbook project more than the typical lapbook often seen with a more hands on project, making it something that students will cherish more than other projects.  However, there is also a lapbook component for those who really enjoy doing them. The drawback to this is this also means that your printer will get a workout as there are many components that have to be printed for each stop, using various different paper if one wishes to really make this a unique project.  It should also be taken into account that the volume of printing is doubled when using this unit study with multiple students, as each one is going to want to make their own projects.  Some projects also use specialty materials, such as crafting foam  Scissors and glue (or glue sticks) are an absolute necessity.  There are so many wonderful projects your student will make while learning about Ancient Egypt.  Students will remember what a Nemes headdress or a Hyksos chariot much easier when they make their own.

The Project Passport studies have always been a huge hit in our household so everyone was really excited when they found out we were going to be reviewing the Ancient Egypt study.  We had gone earlier this year to see the King Tut display here in Los Angeles which whet everyone's whistle for all things pyramids and mummies. 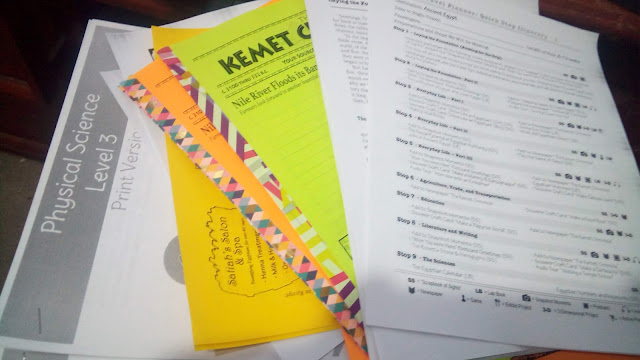 The kids are use to doing map work that goes along with any Project Passport study.  However, they had a bit of a surprise this time when they were learning about the rich, fertile black soil that is distributed along the banks of the Nile river. They thought I lost my mind when I told them to put glue along the River and then sprinkle black pepper on their map to represent the soil.   This has been a laugh for them every time they do map work and was a nice unexpected touch. 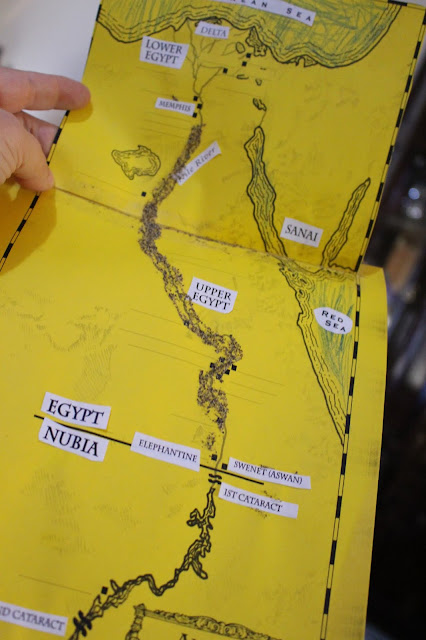 Another aspect of Project Passport that the kids have come to expect is the "Snapshot Moments in History".  This is a visual timeline that the kids fill out with each lesson so that they can have a visual representation of how each event they learn about falls. 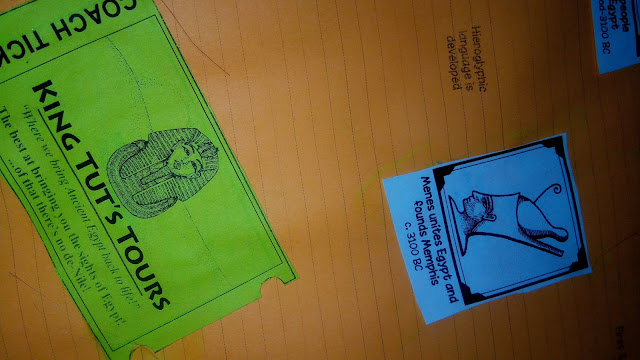 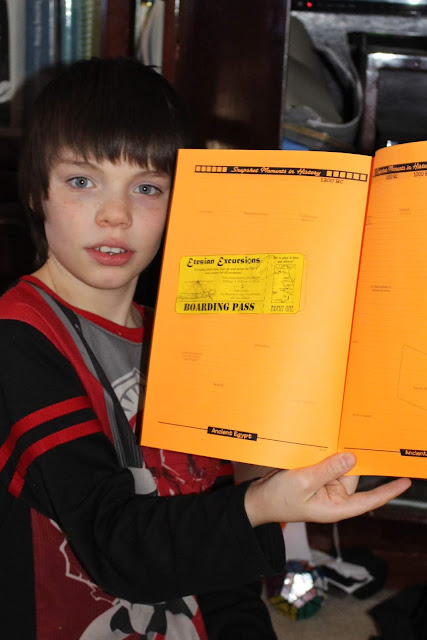 Ashleigh's favorite project so far was the activity about Egyptian fashion where she was able to color and design her own paper dolls.  She even created articles of clothing using colored tissue paper.  She also colored the men's fashions using the gold and blue color scheme that she remembered from our King Tut visit. 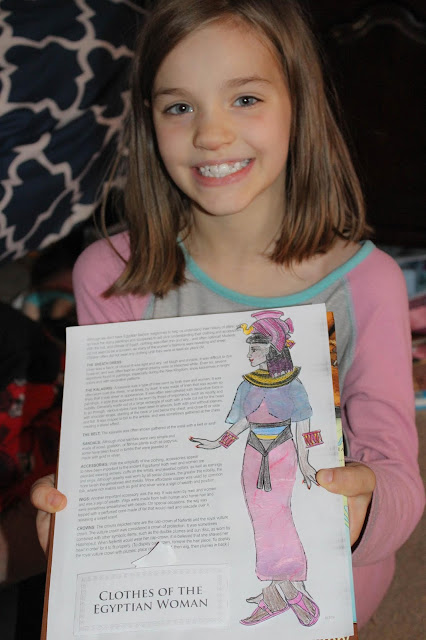 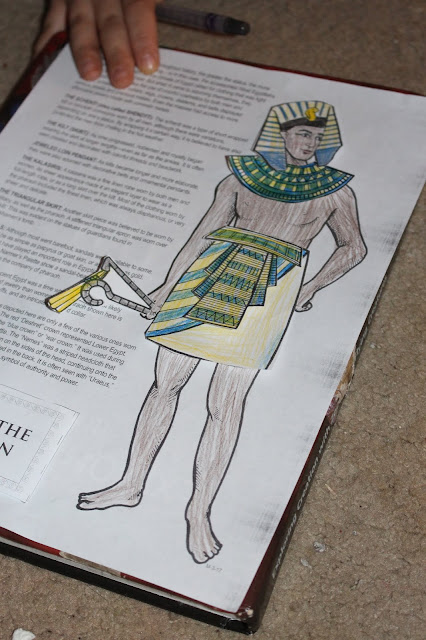 One thing that is always popular with the kids when we work through a Project Passport study is the day we cook a meal using the included recipes.  Now that the kids are a bit older and are more familiar with the kitchen, they helped picked the menu from the recipes supplied and then had their hand at cooking up some Egyptian food.  While I worked on the Aish Baladi (bread) and Ful Medames (beans), the kids worked on the Cucumber Chickpea salad and the Kofta (meat).  A bit of hummus to spread on the Aish Baladi and we had a really nice meal.  The bread was very popular with everyone, especially considering it was a wheat bead and was still soft, and it has already been requested for future meals. My husband really liked the salad and wants that as a repeat as well.   There are other recipes included and we will probably revisit this particular project to whip up a few of the other recipes.

Another thing that was really neat for us for this particular study was that we were able to take the things that we wear learning and then put it with the visit that we had to the King Tut display.  For example, when we went to the display, we were able to see many of the items that were found in King Tut's tomb.  However, beyond just a general description of what the item was there wasn't any information that explained anything.  Two of these items that we were able to see was a bed as well as some head rests.  They were not displayed together, nor were they even in the same areas of the display.

While we thought the bed was really neat when we saw it, we didn't put these two items together. However, when we were working on Stop #3, it talked about the fact that the beds were elevated at one end and that rather than a pillow, they used a headrest.  Prior to reading this, we thought that the board on the bed was a headboard but it was a foot board with the head elevated.  We all failed to put the two items together and we also failed to realize that the head of the bed was elevated.

Another item that we saw that we were able to immediately able to coincide with the study was the discussion about Egyptian fashion and the wearing of Pectorals. One of the activities for in Stop #3 was "Dress Like an Egyptian (Boy)" which had directions to create an Egyptian outfit which included a Pectoral necklace.

My kids IMMEDIATELY recognized the pectoral as being the solar falcon pectoral that we saw at the Tut display.  The kids can't wait to make this (and the dress like an Egyptian girl project) but we had to skip it at the time we covered it because we couldn't get to town to get the foam needed for the girls craft. 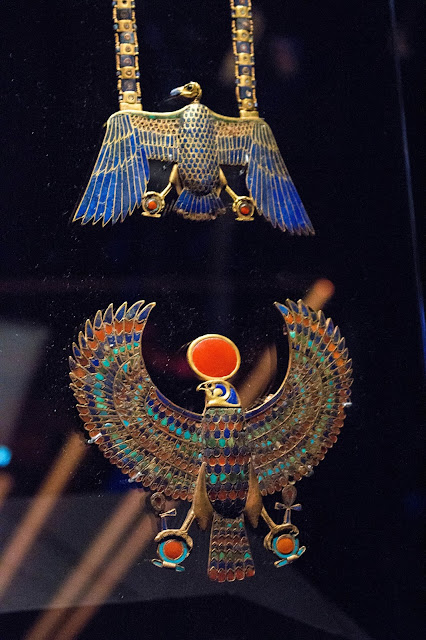 Even more than just the fashions, the kids have found themselves recognizing things that they have seen from the Tut exhibit as they are covered in the Study.   In Step #4, the kids learned how to play the game Senet.   This really made their day, because they saw a Senet game at the museum and they asked me how to it was played but I honestly didn't know.  And they were able to create their own senet game and play on their own.


In Stop #5, the kids have been learning about the process of mummification and the use of Canopic jars.  On Friday they will be making a craft where they design their own canopic jars out of modeling clay and dixie cups and while I doubt ours will look anything like Tut's, it was cool that they have seen the stopper and coffinette for Tut's canopic jars. 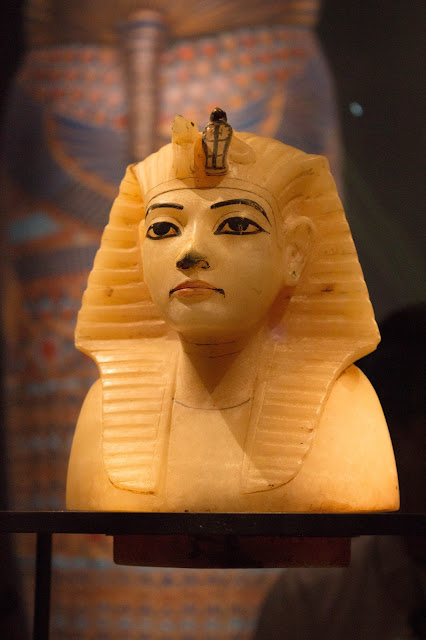 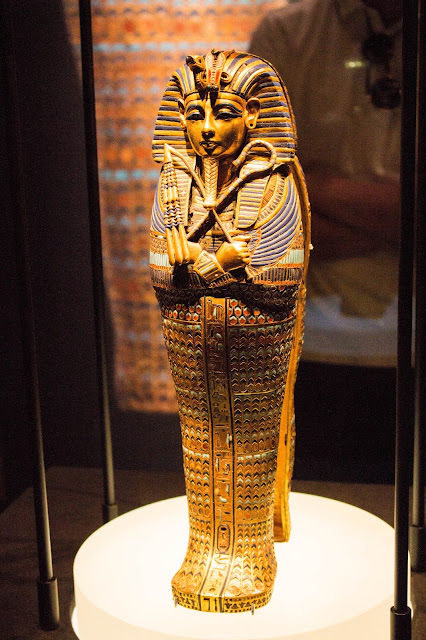 While we still have a long way before we get to Stop #21, I am looking forward to reaching it with the kids because that Stop focuses on Tutankhaten.  But just having the experience of seeing the various artifacts from the Ancient Egyptian time period and then learning more about those items with this Project Passport study has been a very neat experience for the kids.

In the past, we have kept all our activities and map work in a three ring binder.  However, this time 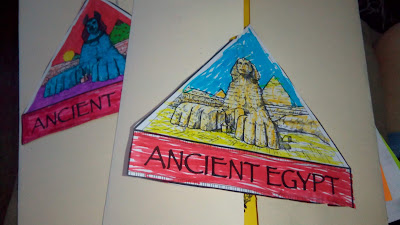 around, the kids have been using the lapbook variation.  Directions for assembly is included with the digital download of the study.  We have really enjoyed this variation rather than the binder because the kids can keep all their work in their own file folder and they can also glue the lapbook components into the folder to keep track of them.  They each colored their own cover picture so they can quickly recognize their own fold and keep track of their own work rather than Mom keeping track of the work and passing it back out to the kids.

This curriculum can definitely be used as a stand alone curriculum to study a particular time period, but it's very easy to add supplemental materials to the lessons to expand even further and reinforce what is being learned.    Books and videos can easily be added in with the lessons with each "Stop" and Home School in the Woods also provides a list of resources that offer suggestions on materials that can help to supplement the unit study.  It covers a large amount of material while keeping the journey fun and interesting while they learn.  I know that when we reach Stop #24 and the kids revisit "Tomb Dash!", they will do much better than they had done earlier this year (and will most likely beat their older sister as well!!). 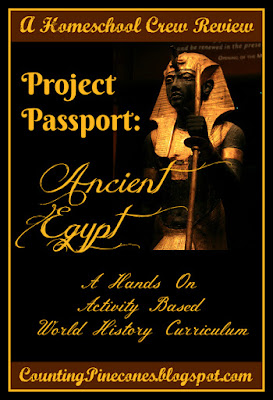 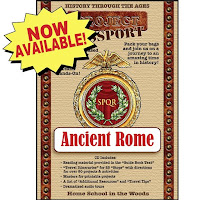 Posted by Brenda Prince at 8:06 PM