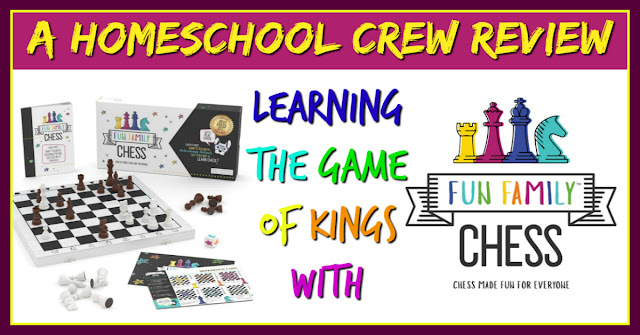 My son is a huge fan of strategic games.  We have a pretty extensive board game collection in our house and his first choices are always those that require some sort of strategy to play.  Until recently, his favorite game was always a specific game that has you seeking to sink boats hidden in the ocean (you know the one) but it's been well over a month since he asked to play that game.  No, my son has a new favorite game that he's asking to play all the time now.

What is this game, you might ask?  Well, for the last month, Garrett has been dominating the board as we play Fun Family Chess from Brain Blox.   And he's counting the days til his father comes home so that they can play together (Dad is the skilled Chess player in our house and Garrett knows it!!).

When Garrett found out that we had been given the opportunity to review Fun Family Chess, it was like Christmas for him.  He's been wanting to learn to play for some time now, but we just haven't found a chess set to purchase for him to being with.   Once he learned this set was on it's way, he literally stalked the UPS man until the package game. 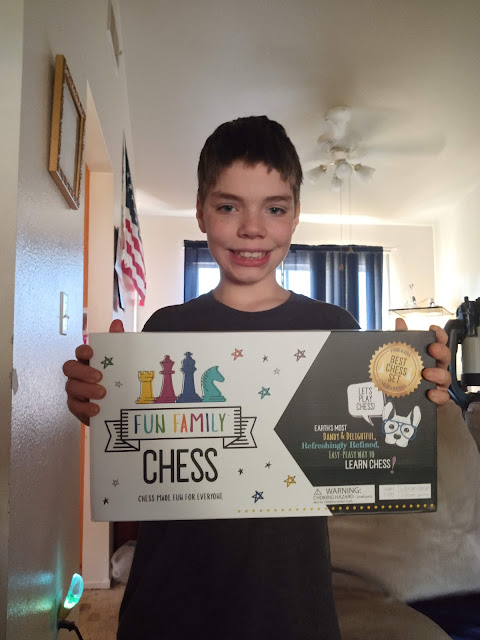 Opening the box, I have to admit I was VERY impressed with this chess set.  Yes, it's designed with kids in mind yet there's nothing cheap or kiddy about this set.

Upon opening the box,  Garrett found a beautiful foldable wooden playing board.  This board also serves as the storage case for the piece of the game, with metal hinges and latches to help keep everything securely inside when not in use. 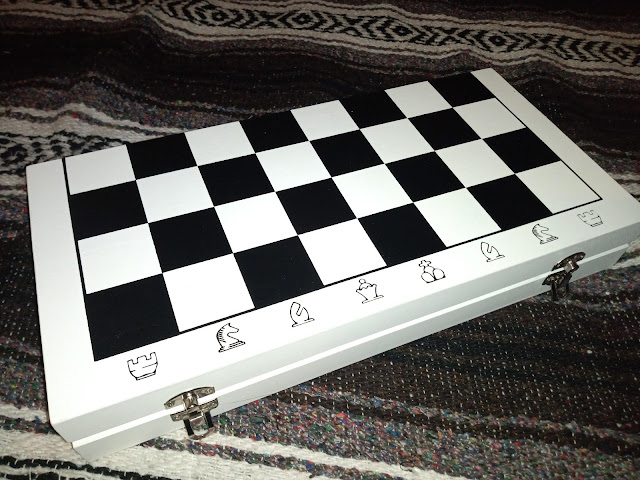 The inside of the board is lined with a black velvet like material and is deep enough to hold all the pieces.  Inside you will find two velvet pouches, each containing the 16 chess pieces for either the dark or light player, as well as two reference cards, a six sided wooden die,  and game instructions. 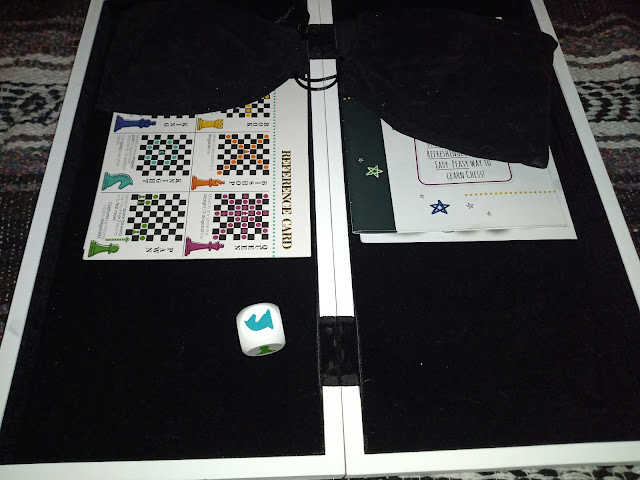 Once folded out flat, the board has guides to show what color piece should go where in order (and on what side of the board) to set up the game.   Very helpful for someone just starting out and saves a TON of time not having either search google or look thru the written instructions in order to find this information out.  With the guide, Garrett and I were able to have our board set up within a minute or two.

Next, our attention went straight to the pieces themselves.  These pieces are nicely designed wood pieces, very smooth to the touch with a felt material on the bottom.   The dark side is represented by a beautiful dark cherry brown stain while the light side is a glossy white.  The pieces are not too heavy but are also not light, making them perfect for smaller hands.  (And on a totally secondary note - the board and pieces smell absolutely amazing when you open the case!!) 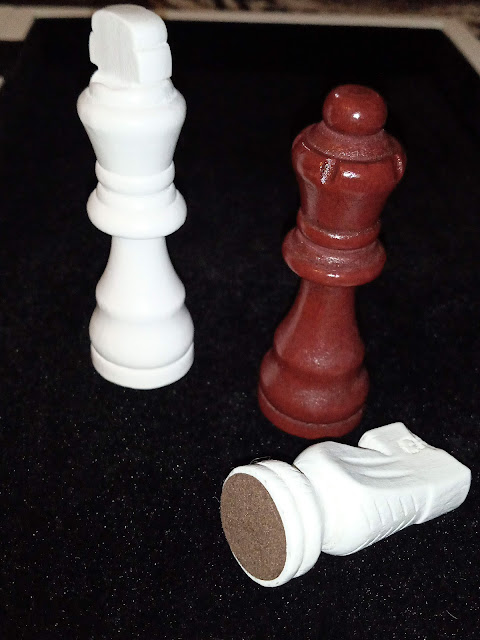 The next piece is the large chess cube.  This cube (as well as the reference cards) are used during the beginning stages of Fun Family Chess, where the player is learning the pieces and moves.  This is a six sided die that has a color and visual representation of each of the pieces found on the chess board, with the exception of the King (There is instead a black star that leaves the player the option to move either a piece of their choice or the King).   This cube is only used in the learning stages of the game, when the player is first learning how each piece moves on the board. (I will explain this more in a few moments). 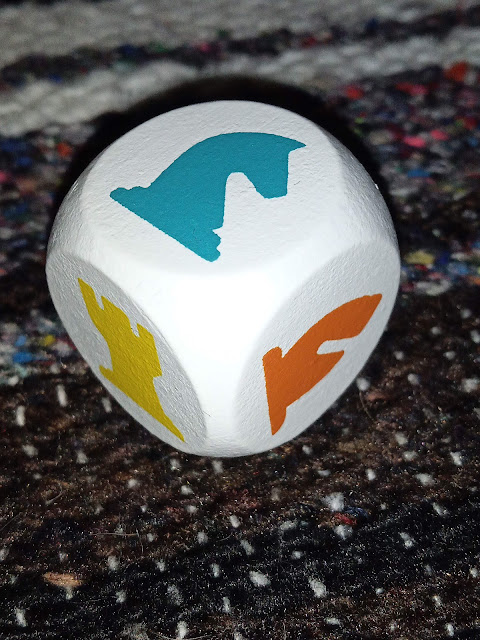 The final component of Fun Family Chess is the reference cards.  These cards list the game pieces both by name, shape as well as a color (matching what is found on the Chess Cube) so that students can quickly refer to the card in order see how that piece is allowed to move.  It also makes note of any special ability that the piece may have, such as the Pawn being able to move 2 spaces on it's first move or that Knight can jump over other pieces. 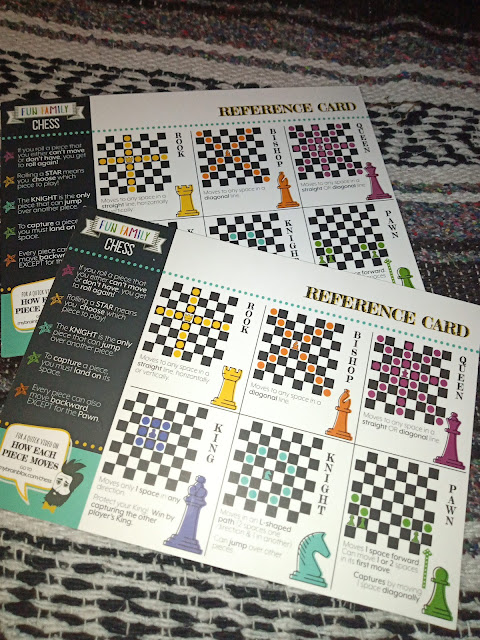 Also included is a 12 page booklet that details how to play fun family chess as well as the actual game of chess, tips and strategies for standard chess, and even a description of plays such as Castling.

There's two ways to play Fun Family Chess.  There's of course the Standard Chess play that you can play with any standard board.  However, if your new to playing chess like we are, then you have the second option.  This option allows you to set up the board and then roll the Chess Cube.  Using the Cube as a guide, you move the piece that is face up on the die.  The reference card is there so that you can know that the "Orange pointy piece with the slot on the top" is the Bishop and can move along a diagonal line or that the "Blue piece that has a loaf of bread on it's head"  ( how Ashleigh described the King) can move 1 space in any direction.

The player rolls the cube, makes their move and then the next player rolls the cube and makes a move.  This allows the player to become use to the pieces and how they move across the board without the pressure of needing skill.  As such, the player then builds the knowledge to acquire that skill while building confidence in their ability to understand the game in a more comfortable setting rather than be told to "sink or swim" against someone who understands the game more.

How We Used Fun Family Chess

Unfortunately, his dad left for military training right before the package arrived, so poor Garrett only had his Mom to play with.   Mom, who has never played chess EVER had to learn right along side with Garrett.  However, that's what makes Fun Family Chess completely different from other chess sets.   Mom could sit down with him and within a few minutes, we were both learning the basics of chess.


Okay, so maybe I let him beat me (maybe I didn't - I won't admit either way. )..  Oh man, that's all it took for him to get bit by the bug. Suddenly, all he wanted to do was play fun family chess.  And I noticed that even before our first game was over, he was getting a pretty good understanding of how each piece moved.  I was still having to reference the cards where he was actually telling me how I could move the piece from memory.

And so now, every night, I'm getting asked to play chess.  I come home from Bible study and he grabs the board and asks to play.  It's really become our own personal time to spend together. 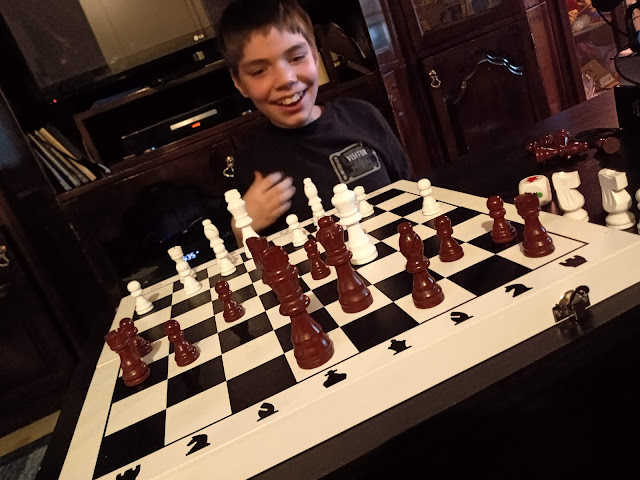 And he really starts thinking about his moves more and more then when he first started..   I'm still relying on the chess cube for moves, but I honestly think he's probably ready for the actual game though. 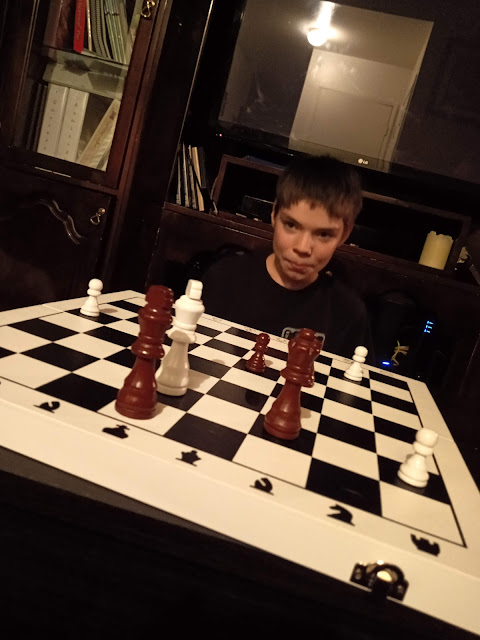 Thankfully, his Dad comes home this week. His Dad actually plays chess and is pretty good at it, so I think it will be great for Garrett to spend time with Dad and learn from him. As it is, when I told Charles that we were playing and he said something about castling, I said I had already moved my Rook (because I had rolled it on the cube) and he called me an amateur.  So, I guess I might start playing Ashleigh  using the "Fun Family Chess" Style while I continue to learn while Dad and Garrett have fun battling it out.

While we haven't accessed these aspects of Fun Family Chess, I do want to mention them.  First, the website offers a few different videos for those who learn better from an audio/visual video rather than reading instruction.   These videos teach how to set up the board, how to play Fun Family Chess, how each piece moves and how to play standard chess.

Second, the purchase of Fun Family Chess also comes with a 2 month subscription to the website ChessKid.com which says to be a 100% safe, family friendly website that allows kids a place to play chess online with other children.   This is not something we have yet taken advantage of as Garrett hasn't begun to play a game of standard chess yet, but once he has begun we will probably look into this for him.

Fun Family Chess can be purchased from Brain Blox website as well as on Amazon (with free shipping for Prime members). 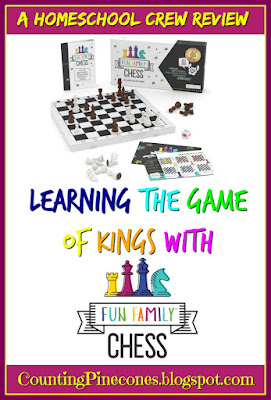 Be sure to click the banner below to see what other members of the Crew thought about Fun Family Chess. Posted by Brenda Prince at 2:53 PM