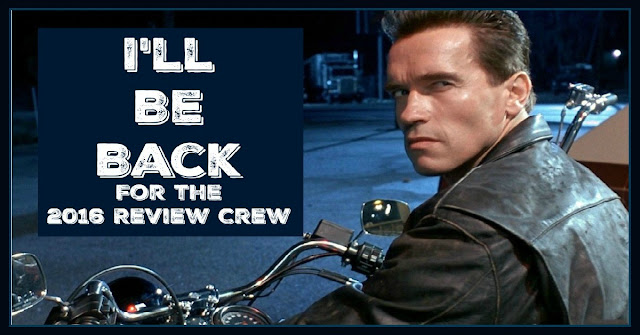 Yeah, you know you read that in your best Arnold voice ;)

Late last night I received a confirmation email confirming that I will indeed be a member of the 2016 Schoolhouse Review Crew.   To say I am both excited and relieved would be an understatement as I was really stressed out as to if I would be invited back or not.

I'm one of those people who always thinks the worst about myself so I spent the last couple of weeks wondering if my writing had been good enough, did I showcase the vendors well, ect ect. I always second guess myself in everything I do.   Now, with the confirmation email in my inbox, I can start looking forward to another great year of reviewing various curriculum.

As I finish my first official year as a crew member, I can't help but to look at how this blog has evolved from where it was this time last year to where it is as of today.  In November 2014, this blog was nothing more than a homeschool diary where I jotted down what we did so that my in-laws in Indiana could keep track of what the kids were doing.  Honestly, I don't even know if they ever read any of it and I was lucky to have even 1 hit on my blog each month.  In almost a year, I had less than 200 hits.

What a difference a year makes!!!   I have had almost 16K viewers visit my little corner of the internet universe and it always blows my mind when I post something new and it instantly has 10 views within the first 10 minutes.   Thank you to all of you for the support you have given to this blog, without yall, I would still just be writing to myself.

This blog has evolved in many other ways as well.  In it's early days it was nothing more than a running commentary - the kids did this, the kids did that, I did this and I did that..  Pictures were minimal and were usually just the kids filling out a worksheet.  There was a title and text and that was about it..  Can we say BORING???

Granted, it's not like this blog resembles anything remotely like award winning journalism but it has come leaps and bounds from those early days.  I spend almost as much time designing the graphics that go along with the blog, whether its the title banner on the top or the accompanying Pinterest pins for each posting.

The Pins have even changed.  Yesterday for Throwback Thursday I reposted the review I did of the "Wanna Be - When I Grow Up I Want To Be A Firefighter" by The Old Schoolhouse..  The difference between the pin for the original posting and the pin for the Throwback post?? Night and Day :)

Already the Review Crew has a wonderful list of Vendors coming up for 2016 so there will be even more wonderful reviews from both favorites as well as new companies.

To say I'm pretty excited is an understatement.

So, here's to our one year anniversary.. Thank you for helping me make it this far as this blog wouldn't be anything without readers..  And here's hoping 2016 sees even more changes (for the better)..
Posted by Brenda Prince at 4:22 PM