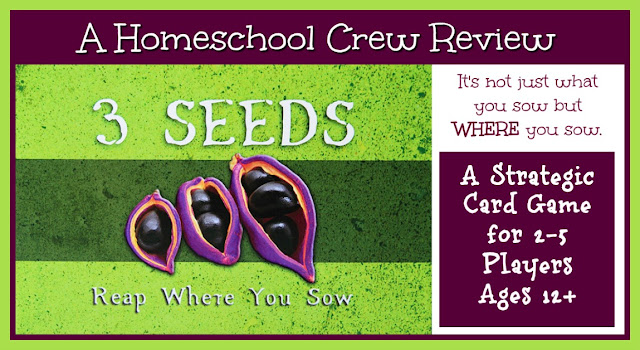 Some time back before the Thanksgiving holiday, I did a review for a wonderful board game called Commissioned from Chara Games.  Commissioned was a historical based co-operative strategy game in which players take the role of early Christian Apostles and work together to spread the word of Christ, grow the Christian church and collect the books of the New Testament.  I found the game to be very impressive: from a well thought out concept to the quality construction of the game board and pieces.

Today I have a second game by the same company.  The challenge to "Reap What You Sew" takes on a new meaning in 3 Seeds, a family safe light strategy card game for  2 to 5 players aged 12 and up. 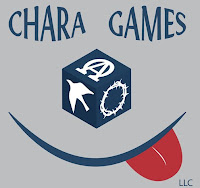 Chara Games was developed in 2014 by Patrick and Katherine Lysaght who wanted to produce table top games with a Christian theme.   Following a very successful Kickstart campaign that raised more than 254% of the production cost, Chara released their first board game, Commissioned, late last year.

Their 2nd game, 3 Seeds, was designed by Anthony Buhr and released just recently. Both Commissioned and 3 Seeds can be purchased though Amazon. 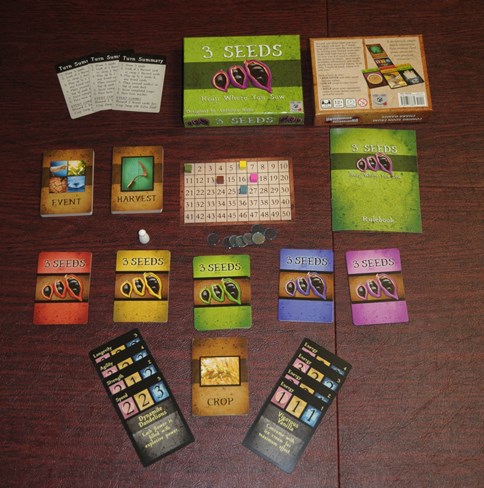 3 Seeds is a card game for 2-5 players and takes around 30 to 45 minutes to play. It is recommended for players 12 and up. Included in the game are:

The basics of this game is that you want to harvest the most amount of crops while managing time, labor, and money while hidden information might be working against you to sabotage your crops.

Each player has a hand of Seed cards that match to their color (5 colors for up to 5 players). These cards include two cards each for Time, Labor and Money. In the playing field in front of each player, there are two cards - a face up Crop card and then a face down Harvest card. During their turn, players draw three cards from the deck and then plays two of their Seed cards on top of the Crop card that is currently in play (either their own or in front of one of the other players). The third card is then placed in the top of your deck. 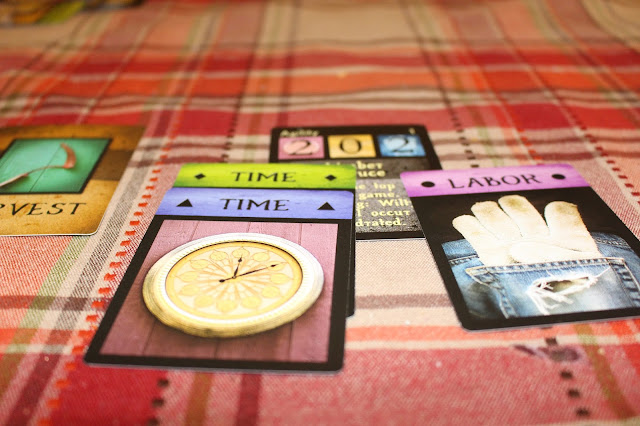 Crop cards indicate the resources that the player would need in order to harvest that crop - typically a combination of time, money and labor.  If the player meets the requirements to harvest, they are then able to flip over the Crop card that is face down which gives the scoring points for that crop. All players who currently have a seed card for that crop are then awarded points for resources they have contributed to the crop multiplied by the number on the Harvest card. The Crop Card is then given to the player who controlled the playing field while all other players who contributed to the harvest would then gain an Event card.  Then a new Crop Card and Harvest Card are drawn and placed back in the playing field.  The game is over when all the Crop Cards have been played and the player with the most points wins.

The setup for this game is very simple and game play is easy to learn.  However, if one player isn't paying attention to what they are doing, they can quickly find themselves at a disadvantage as the goal is to earn the most points by sowing your seeds with the crops that have the highest point yield by paying attention to what the other players are doing in order to gain insight to information they know that you may not.

This game is a lot of fun and Charles, Alyssa and myself ended up playing several hands together.  The game is well thought out and much like Commissioned, I found the cards and game construction to be top notch.  This will be a game that will be pulled down from the game shelf often and will hold up well over the years. 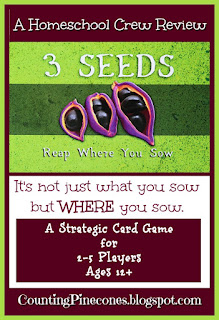 Posted by Brenda Prince at 1:26 AM