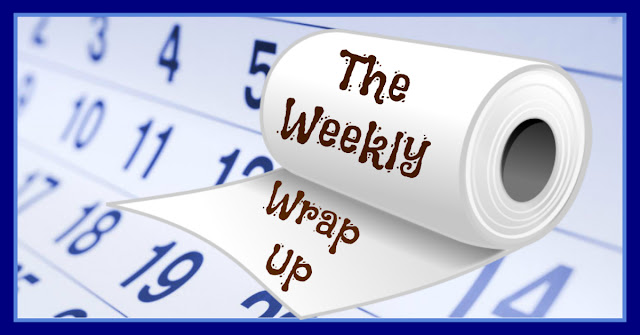 It's been quite a while since I've done a weekly wrap up and with all the new and fun things that we've been doing with our homeschool, I figured this week would be a great time to start.

One thing I need to do for my weekly wrap ups is come up with a new graphics.. LOL   Originally, I used the toilet paper with the brown writing as a joke because it sure seemed our school week always went down the toilet by the time the week was over.  This is no longer the case as the kids are learning and working hard with their school work.. I guess before next week, I'll sit down and design a new graphic ;) 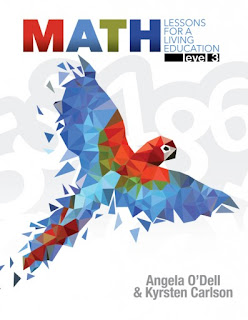 The kids and I are on our third week of school since returning from our holiday break. With the start of a new year, we also started some new curriculum that after doing some research, I felt was a better fit for the kids than some of the stuff we were previously using.  The first of these was switching to Master Books for our 3rd Grade Math Curriculum.  Previously we were using Math U See, which I absolutely love  but felt it was a bit too "utilitarian" for Ashleigh.  We are still using it as reinforcement and the kids will be working through the Gamma level along with their math work, however, I liked the "living" style of the Master Books a bit more as it engages them a bit more.

As we are on our third week with Master Books, the kids are doing review materials. This particular week was reviewing addition including carrying as well as tally marks.  Super easy and the kids blew through it but it did give us some great opportunities to talk about the Wright Brothers, the country of Peru (which we found Lima, Peru is 4,005 miles from our home - as the crow flies) and the Andes Mountains.

Another new curriculum we started this week was a Texas History curriculum geared for lower elementary students.  We are using Discover Texas which can be found at their website here. This week, we concentrated on the symbols of the state, such as the state bird, flower and tree as well as the state song, motto, nickname and the flag.   This also gave us a wonderful opportunity to use some of the notebooking pages available from Notebookingpages.com as I work on easing Garrett into doing more writing this year.


Last year, we focused on poetry by Robert Louis Stevenson so I wanted to change it up a bit for them and let them have a bit of fun with our daily poetry.  So we're starting to read from "Where the Sidewalk Ends" by Shel Silverstein.  The kids are loving that.  We read a poem each day to start our day off and it helps set the tone for the day, especially our "Wacky Wednesdays".. LOL  Without a doubt, their favorite this week was "The Loser". 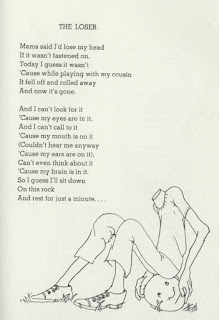 After poetry, the kids have been working on their grammar lessons.  This week, we focused on Antonyms and Synonyms and had a couple of pop quizzes over both, which the kids both scored perfect on.  We usually also include our literature reading at this time, however, I sort of messed up and got a condensed version of Swiss Family Robinson and I wanted to throw it across the room - but it was a library book.. LOL   So next week, we'll start reading a selection by G.A. Henty for our literature selection.


In addition to the geography lessons included with our math book, the kids have also been working through the "All About The World" geography study unit from SchoolhouseTeachers.com (our grammar unit is also from there).  This week was a concentration on the oceans of the world (last week was the continents) as we prepare to begin focusing on learning the various countries of the world.  The kids know their 50 states pretty well (although they still struggle some with the New England area) so it's time to start learning the various regions of the world.

For history, the kids are working on both American History as well as learning about Ancient Greece. We're currently reviewing the Ancient Greece unit study from Homeschool in the Woods, which we'll have a full review on next month.  For this week, the kids learned about how the Minoans, the Myceaneans and about the Dorian invasion.  We also talked about Hellen and his sons and how the various inhabitants of Greek were named for them.  We also did quite a bit of mapwork as we learned the different peninsulas and islands of Greece. 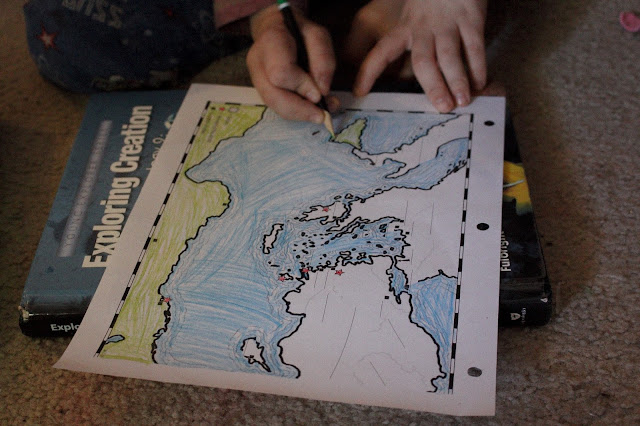 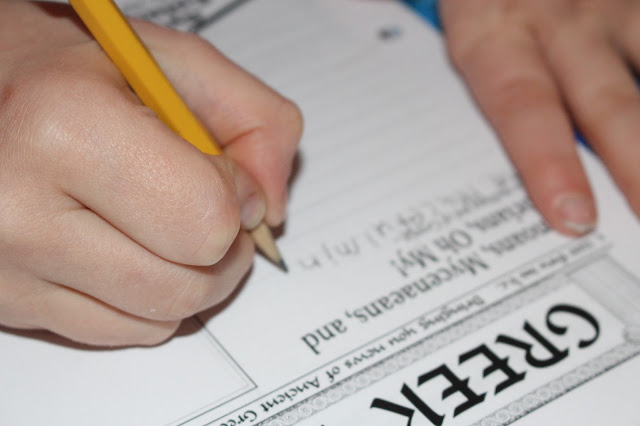 For American History right now, we're simply reading the book "Rush Revere and the Brave Pilgrims".  Regardless of his political views, I have heard really good things about this series by Rush Limbaugh and so far the kids are loving it.  Yeah, it can be a bit silly, with a talking, time travelling horse, but if it captures their imagination and gets them to sit down and actually listen to the story, I'm okay with it.

Another new curriculum we are working through is "Exploring Life Science" by Chrissy Martin.  I'm going to be honest, I picked up this curriculum as a free e-book off of Amazon sometime in the middle of last year and didn't give it too much though.  It caught my attention back during Christmas break and as I started giving it a look over, I was REALLY impressed with it.  It is a creation based curriculum, which I like, but it's extremely thorough.  This is our third week with it and so far the kids have learned the difference between eukaryotic and prokaryotic cells  and learned about the structures of animal cells and plant cells and the difference between the two.  And when I say they learned, I really do mean it - I am completely amazed by how much they are retaining.  I think I have the only kids in 3rd grade on base that know what a golgi complex is and what it does.. LOL

But the REAL draw of the new science curriculum is the microscope work we've been doing these last two weeks.  I was really fortunate to be able to purchase a nice light microscope with taxes for our homeschool classroom, along with a few sets of prepared slides. The first week of this year, we spent time learning the parts of the microscope as well as proper handling. Last week, we put those lessons to use as we looked at simple things such as salt crystals (and were completely amazed that ours were rounded rather than square), a planarian flatworm and the letter E under the scope to see how the images appear in the scope vs what we see with our eyes, as well as the "opposite" direction the slide moves when using the knobs. 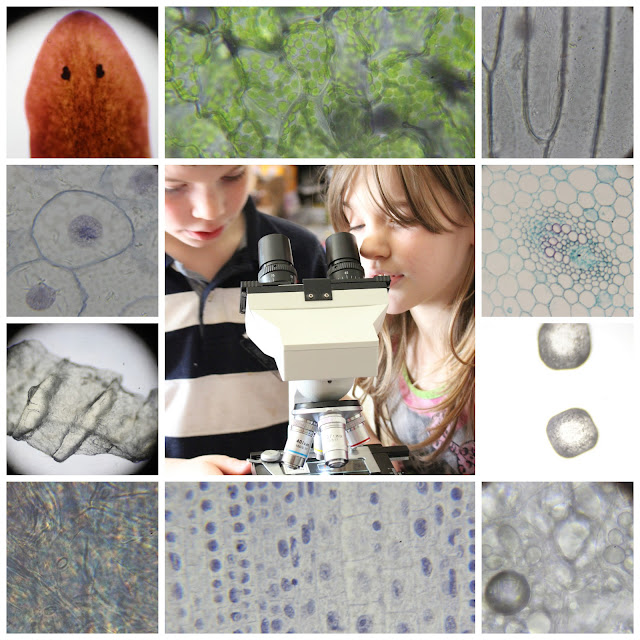 This week, the kids actually began getting into the "meat" of life science as we looked at various animal and plant cells under the scope.  For animal cells, we began by looking at skin cells and discussing the fact they did not have a nucleus since they were dead. We then took a scraping of cheek cells (donated by Garrett) where we were able observe the cell membrane, cytoplasm and nucleus of the cell.  We then looked at a prepared slide of Ascaris that had been dyed so that we could see the same cell parts really well.    For plant cells, we looked at a prepared Rannuculus stem and then we prepared our own slides from a thin slice of potato and onion skin.  Since we also had a prepared and stained onion slide, we compared that to our prepared slide.  Finally, we prepared a slide from our Bacopa plant from our aquarium, where the kids were able to see the Chloroplasts in the cell really well.  We discussed why they were able to see the chloroplasts in the Bacopa and not in the onion and potato.

Each time we looked at a sample under the microscope, the kids had to sketch what they saw as well as identify what magnification they were looking under.


Overall, we've had a really great three weeks since the turn of the new year and I look forward to sharing more of what our classroom is like each week - something I honestly haven't focused on too much in the past because I felt inadequate.

Discussion of Classification and Kingdoms
Proper Use of Periods and Commas
Review of Subtraction including Borrowing and subtracting money
Major Geographical Features of the World
Rush Revere and the Brave Pilgrims
Texas Geography: Rivers, Land Features and Natural Regions
Ancient Greece: The Archaic Period, Greek Columns and Greek Government
Literature Selection: The Cat of Bubastes by G.A. Henty

Also, we're going to be starting a new review item next week with Eclectic Foundations Language Arts Level B, which should be in my mailbox tomorrow.   That may or may not chance our Grammar curriculum, depending on how well it fits in with what we're currently doing.

Posted by Brenda Prince at 6:47 PM