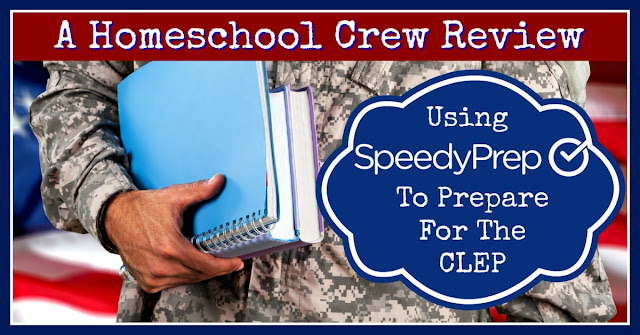 Most of the reviews that I do for the Review Crew are taken with the kids in mind.  When I decide if I want to try an item in my home, I consider if it's a good fit for my two youngest kids. Sometimes, I take in consideration if it's an item my oldest daughter can use, even thought she attends public schools.  However, when I was given the opportunity to review SpeedyPrep, it wasn't my kids I had in. mind but my husband. For the last few weeks, Charles has been studying to take the Natural Science CLEP test using SpeedyPrep's CLEP Study Course.


For those unaware of what the CLEP, it stands for College Level Examination Program. Administered by the College Board, the CLEP is a series of standardize tests that allow students to earn college credits without taking classes by showing proficiency in those courses.   By taking and passing the CLEP, students can save much time and money from not having to pay tuition and take those classes in a classroom setting. 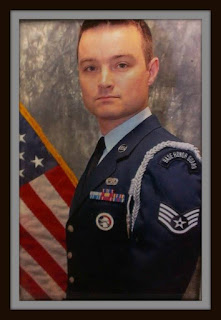 Most often, CLEP tests are taken by current college students pursuing their college degrees. However, there are many occupations that require their employees to continue their education in order for advancement in their career field.  One such employer is the United States Air Force, which my husband is a proud member of.  As he advances in rank to a Senior Non-Commissioned Officer, he is expected to work on and eventually obtain a college level degree. Luckily, the Air Force has it's own college (The Community College of the Air Force) that awards over 22,000 Associate Level Degrees in Applied Sciences in more than 65 degree programs.  To help their Airmen further, the Education Office allows service members to CLEP many of the required classes.  Even better, the first attempt at each test is offered to service members for free - saving members the $80/per test price tag.

Because my husband is at the current stage of his career where he needs to begin taking classes or taking CLEP tests for credit, I was pretty excited for him to have access to this valuable service offered by SpeedyPrep.  Charles has been out of high school since 2005 and being able to have the proper study materials would help him in having the best chance at passing the CLEP tests that he needs.

The SpeedyPrep service is an online website that prepares you for the CLEP exam. Their materials meet the College Board perimeters set for each subject that most colleges accept CLEP testing for. Passing the CLEP the first time is guaranteed if a student takes the CLEP test after first achieving a 90-100% score on the SpeedyPrep study sessions.  It is advised that students using SpeedyPrep have at least completed the high school equivalent of the subject being studied before attempting to use SpeedyPrep.

SpeedyPrep works well on most website browsers but we were not able to load it on the Opera browser. I had no issues getting it to work well on Chrome, Microsoft Edge, and Firefox.  SpeedyPrep is completely online and runs from the website - internet access is necessary to access the website and nothing is downloaded to the computer.

SpeedyPrep is easy to use. Upon logging in, you are presented with a list of the  CLEP courses available for study such as Literature, Spanish, Natural Science and Government. 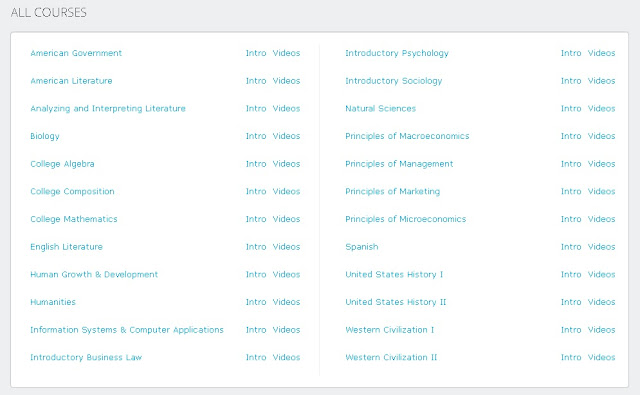 Each course gives you the option of viewing an introduction to the course that gives a breakdown of what will be studied and how much weight that particular aspect of the course weighs on the CLEP exam. 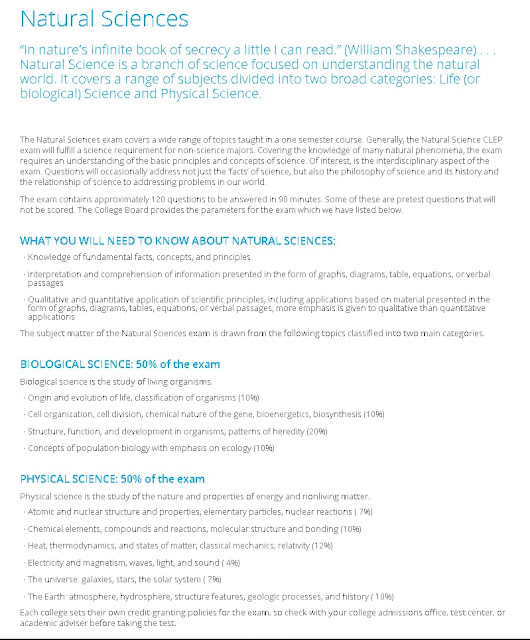 A second option allows the student to review videos that are used during the study sessions that explain and teach the material covered in the course. (Note: These videos are NOT the program and just watching the videos without working through the study material will not prepare you for the CLEP test).

Once a course of study is selected, the student is given a list of specific topics that are covered within that topic.  Students can select which of these options they wish to study during their session or they can select all of the options. Once selections are made, you then begin the actual study session. 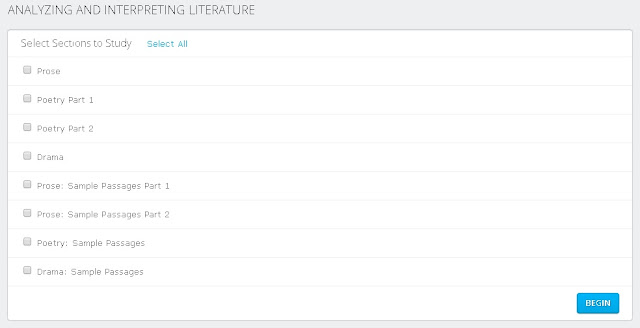 During the study session, you are given a series of questions.  While the CLEP tests are given with multiple choice answers, SpeedyPrep instead uses a fill-in-the-blank format that they refer to as a "flashcard" system which requires the student to come up with the answer from what they have learned.  The understanding is if you can recall the answer and write it in, then you will easily be able to recognize the correct answer when taking the actual CLEP exam.

Once the answer is submitted, SpeedyPrep will then immediately let you know if your answer is correct or not and then provide study materials to read. 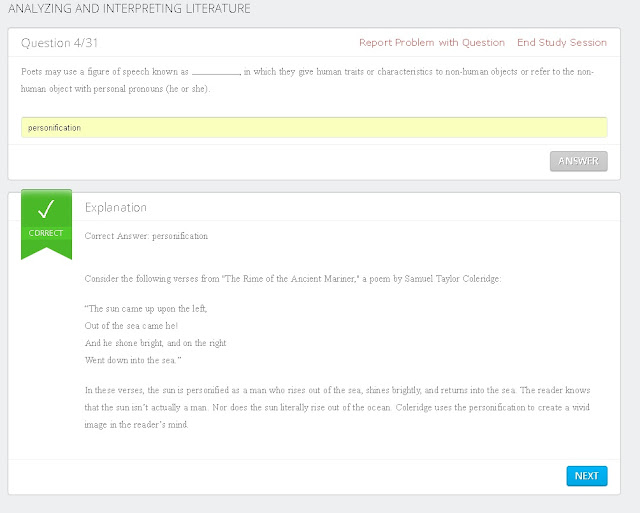 Some of the answers also gives the student access to one of the videos that correlates with the topic. For example, when given a question in regards to Angiosperms, a video option was given that explains Angiosperms and their traits.  By watching the video and retaining the information provided, students will then be able to answer the previous question as well as other questions in relation to Angiosperms. 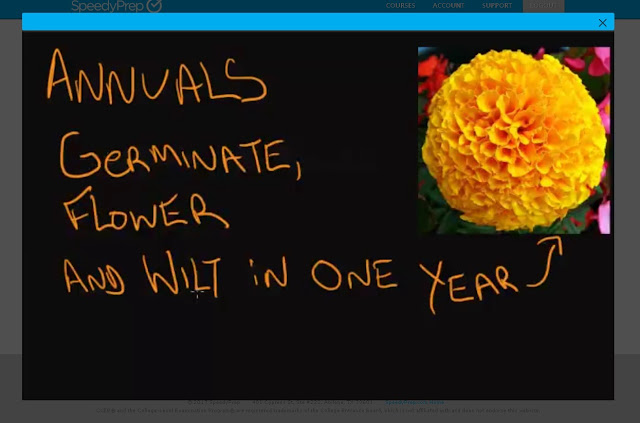 After going through the questions, students are then given a percentage as to how they scored on the questions.  This helps to give a good indicator as to how the student would score if taking the actual CLEP exam.  By working through the questions and actually reading the study material provided and watching the videos, students should be able to increase the score until they are above a passing percentage.  At that point, students should be able to pass the CLEP test of that subject.

My husband has been working through the Natural Science course in preparation of taking the Natural Science CLEP for his Associates degree. I will admit, he hasn't used it as much as we would both like - being military, he recently tested for promotion during the same time he's been using SpeedyPrep and had to dedicate much time at studying for that test. Because of that, he's only in the last couple of weeks been able to focus on studying for the CLEP that he hopes to take in June.

During his second session at answering the flashcards on SpeedyPrep, he realized exactly how little he remembered from his high school years. I say the second, because his first session was answering Astronomy questions, something he is very involved with as a hobby.  He did really well with the Astronomy questions and it gave him a bit of overconfidence when he went into the second session of study. He didn't do very well - I think he scored 32% on that second session.  However, he read through the material and when he repeated that section of the course, he scored much higher.  SpeedyPrep keeps a record of how well you have done during each session, both in percentages as well as how many questions were answered correctly, making it easy to gauge your progress.

Charles is very meticulous when it comes to studying. He likes to concentrate on one particular aspect until he feels he has a good grasp on the material. What works best for him is to study for a few days, then take a break from the material and then return to it to see how much he has retained from the study session.   His first main focus was the section on Electricity and Magnetism. For his first study session with the program, he scored pretty low overall. After reviewing the study material given after his incorrect answers, he then returned to the questions and tried again, scoring much higher. He again studied the material for the answers he got incorrect.  After taking a break from the material, he returned to that section to try again, that time getting all the answers correct.  From there he has moved on to Heat, Thermodynamics, and States of Matter Part 1. He'll likely work through the entire Natural Science section using the same technique.

Here's what Charles had to say about using SpeedyPrep:

"I was a bit skeptical about the fill in the blank format because I had never used that format before, but after using it, I feel like I am able to store and recall the information better and I am able to recall the information much better when I return to the study sessions. Since it's all online and there's nothing to download to a computer, I am able to access the website from computers at my work to work through questions during downtime as well as from home. The website is easy to navigate, I am able to go back and look at past study sessions and trends in my performance. From what I have seen, I feel very confident that as long as I put the work into studying, I should be able to pass the CLEP exam without any problems.  Of course, the biggest proof if the program works will be whether or not I do pass the CLEP exam when I take it, which will be a great indicator that the program works as promised. "

Another Airmen in my husband's unit is also currently studying for his Natural Science CLEP, using the typical study guide that can be purchased at most book stores.  My husband had the opportunity to flip through this study guide to compare it to the questions and information that he's studied using SpeedyPrep and found that the questions are almost exact. However, unlike SpeedyPrep, there is no immediate feed back when a question is missed and there are no videos explaining and teaching the information so that retention is achieved. 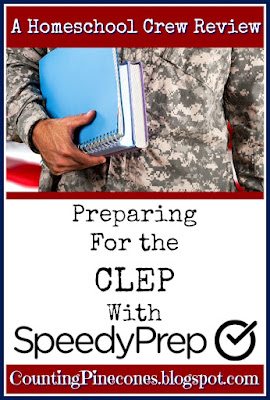 My husband is aiming to take his first CLEP in early June and I have no doubt that this program will be the key to him passing it his first time around.  He's also hoping to knock out at least two more tests before our 6 month subscription is over with.  After that, I can easily see us continuing our subscription with SpeedyPrep as he knocks out the other tests necessary for his Associates degree.


For more information about SpeedyPrep, be sure to check out their website or visit one of their social media sites: