C is for Cats (Blogging Through the Alphabet) 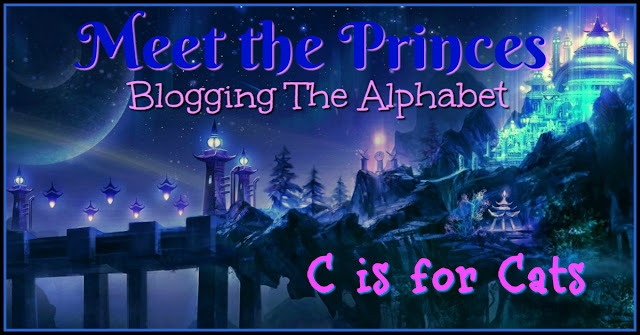 C seems to be a simple enough letter for us to blog this week because without a doubt, our cats are pretty important to our family.  As long as I can remember, I've always had a cat as a pet and we've been very fortunate that our cats have lived long lives and have been with us for a long time. (Before Newton joined our family, our previous male cat lived to see 20 years of age).

Currently, we have three cats in our house..

Kiera (Aka Ki-ki) is the oldest of the bunch.  When Alyssa turned 4, I promised her that I would take her down to the shelter in Houston and pick out a kitten.  The shelter we picked out was called Citizens for Animal Protection as a few weeks prior to our driving down, a friend of ours had gotten two kittens from here and had a great experience with them.  So just prior to her birthday, we drove to C.A.P and Alyssa picked out a kitten which she named Nala.  However, I completely fell in love with a small tortoiseshelled ball of fluff.  Because of the overcrowding at the shelter, C.A.P. was offering a 2 for 1 deal on kittens which allowed us to get both kittens, both fixed and up to date on shots, for $60.  Ki-ki is now 14 years old and still enjoying the good life.  Until recently, Keira was super affectionate and loved attention, however, as she has gotten older she tends to just want to relax and be alone and tends to hang out under the kitchen table. LOL  If I was as old as she is (in cat years), I would want to be left alone too ;)  She also can't see very well anymore, so I'm sure that's much of why she doesn't venture out much anymore.

Our second cat is Kitten.  Kitten is also a tortishell calico but much different from Ki-ki.  Where Ki-ki is large and fluffy, Kitten is small, short haired and skinny.  Kitten came to us when my ex husband was having a ferral cat problem and one of the mama cats had two kittens.  Right before we were to pick up Alyssa for a visit (at that time, my ex had custody), one of the kittens had been hit by a car and we didn't want to see the second kitten meet the same demise, so we brought her home. 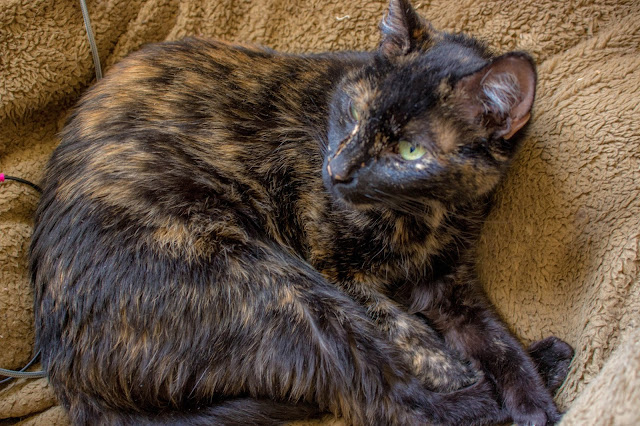 Unfortunately, Kitten was a feral cat and even 8 years later, she still has feral tendencies. She's not very friendly at all, to be honest, as is quick to lash out and scratch without warning.  She is, however, affectionate with Alyssa and so she is Alyssa's cat.

Newton is our third kitty and our only boy cat. He falls between Kiera and Kitten as far as affection goes -he is not a lap cat and doesn't like alot of affection but he does like being around people and getting the occasional chin scratch.  He's the smallest of the three cats, maybe weighing about 3 lbs. 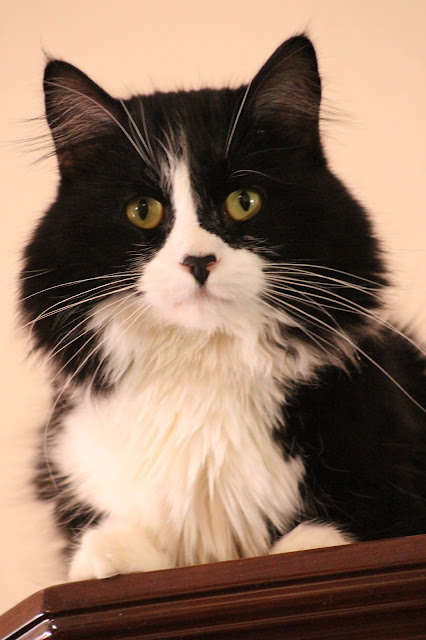 Newton was a birthday present for my husband, who always complained that he didn't have a cat of his own and so I found him via an advertisement on the internet.  Newt was about 8 weeks old when we brought home this tiny ball of black and white fluff.  5 years later and he's everyone's favorite kitty.  The only problem with Newt is that almost every morning, I'm woken up with him climbing on my chest wanting a few of his treats that I keep beside the bed.. LOL

We love having cats as part of our family and I think they are the perfect pet for the kids as they don't require a lot of care..
Posted by Brenda Prince at 4:29 PM