The clock is slowly ticking away the last few hours of what remains of the year 2014. I honestly can't say I'm sorry to see it go. This has been a very trying year for our family and while it had a number of "Ups" that we celebrated, it had enough "downs" in it to make us glad this year is over. 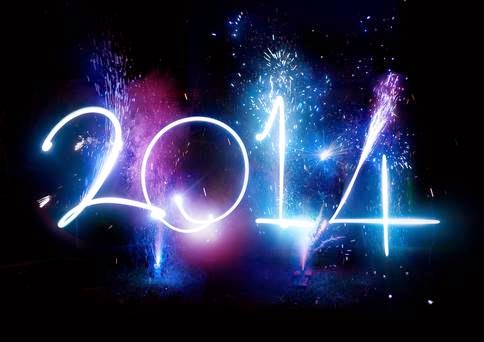 Each year, we always reflect upon what the Lord has provided for us through the year. And this year, it was suggested to pick a word to reflect my thoughts for the year of 2015.. I thought long and hard about this and I came up with one word - PRAYER! 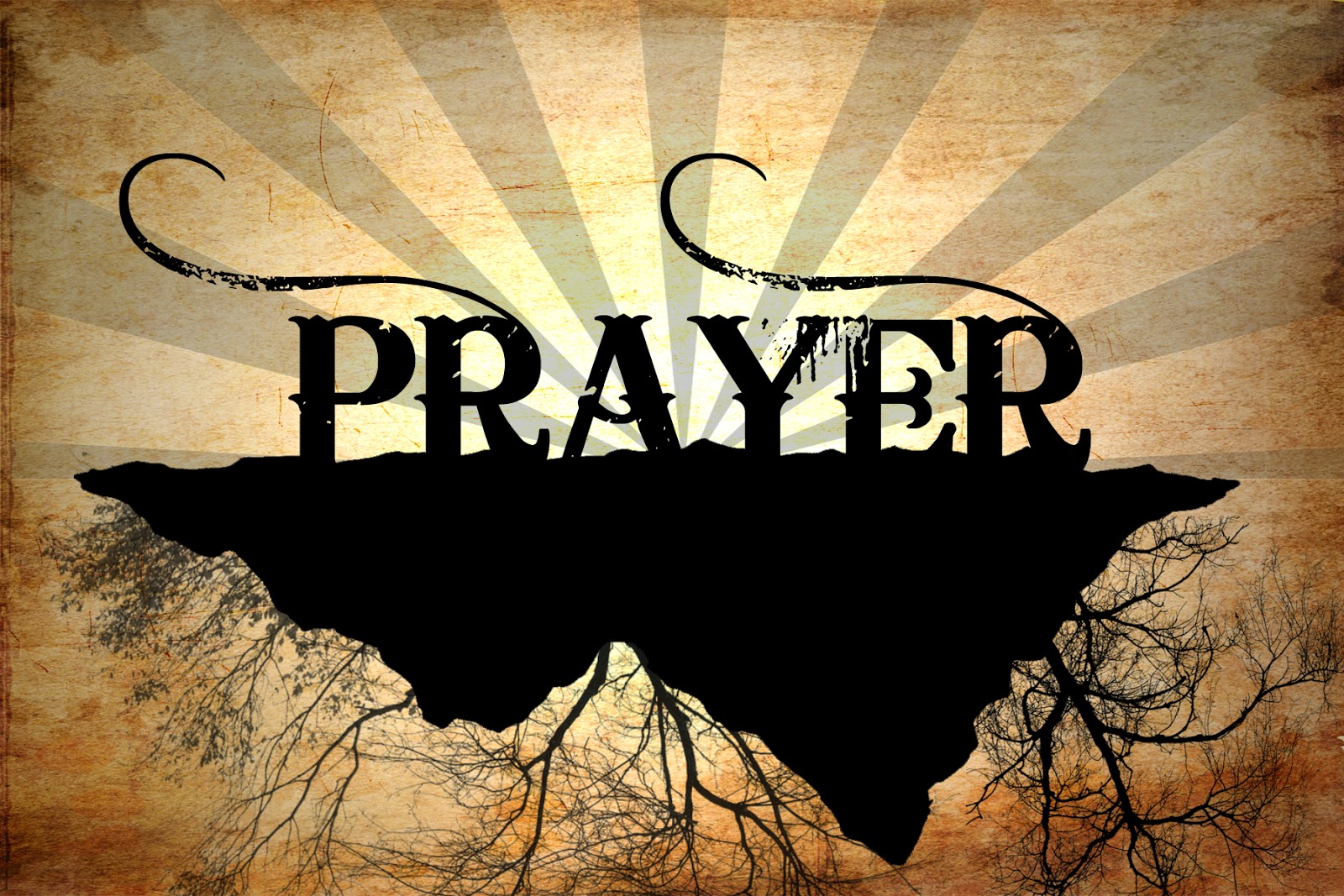 There have been so many times in our lives together that my husband and I were not so sure how we would get by and one of us would just say "pray about it" and we were always provided a way to keep our heads above the water. This year was no exception:  After taking a full year to plan and pay off our family vacation to Disney World, we were suddenly faced with the very grave threat that we could be without any income, no place to go and no roof over our heads. Due to budget cuts for the government, my husband was told that his position was being reduced - that out of 38 Airmen in his career field, 35 of them would be cut loose and released from the Air Force. That meant of all the airmen in his entire career field, only 3 people in the entire country would be picked, not just his unit, and his unit was sending 3 people up for selection. To make matters worse, there were no jobs for me in my career field when we moved here, so I had been out of work since 2010 and did not have credentials for the state of California, so there was no way I could get a job to support us. We were told that we wouldn't know for sure if he would remain in the Air Force until September - our Disney trip was planned for July-August. 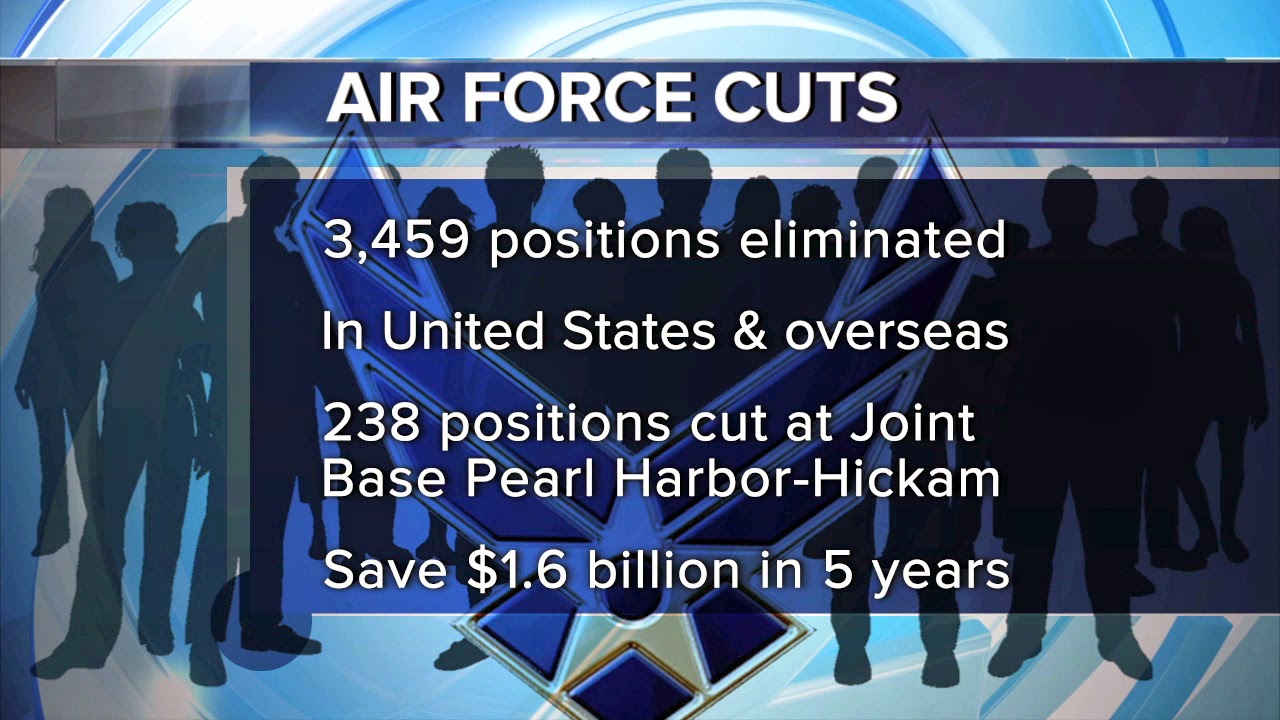 We debated long and hard. If we cancelled the Disney Trip, that was 5K that we would have in our bank account to live off of if he was cut from the military.  We also debated if we would ever be able to afford another 8 day trip to Disney World if he got out. Should we take the trip that might end up being the trip of a lifetime and deal with the finances later or should we cancel the trip and put that money away just in case.

We decided to cancel the trip. I explained to our travel agent what the situation was and she was able to get our entire amount back on the trip, with the exception of the price of the theme park tickets which were non-refundable.  We waited as the time for our trip came and went and the September date got closer and closer. We prayed.. We prayed ALOT.. We prayed for Charles to be one of the 3 who got to stay which made us feel like terrible people because we knew that meant if he stayed, the other two guys would be eliminated. We knew that if he stayed, that still meant 35 men/women were being cut and if they had families, they faced the same uncertainty that we did. We prayed that if he was cut, that maybe God would provide another opportunity for us: maybe my husband would be offered a job working for Boeing or Lockheed Martin.. We had no idea what was going to happen, but we knew that it was in God's hands..

God heard our prayers... And then some..

During this time, the Air Force offered many of its personnel early retirement packages as well as early release of enlistment with separation pay. This wasn't an offer given to the 38 men/women in my husbands field who were up for elimination, as they all had less than 6 years time in service but it was offered to many who had 6 or more years in. Many took this offer which meant that for every person who took the offer, another person who might have been eliminated got to stay. Before the September date came up, we found out that instead of 38 people in my husbands career field being released, enough people had taken the offer and NOBODY out of those 38 would be eliminated. My husbands job was safe, the two other guys in his unit were safe, and 35 other families in the Air Force were safe.. Unfortunately, 3500+ still lost their jobs but original figures were putting close to 14K to lose their jobs.. God Is Good..

That same time frame, we found out my husband passed his test for Staff Sergeant and would be up for promotion. More money in our bank account, more opportunities for him as far as advancement.  Again, God is Good. 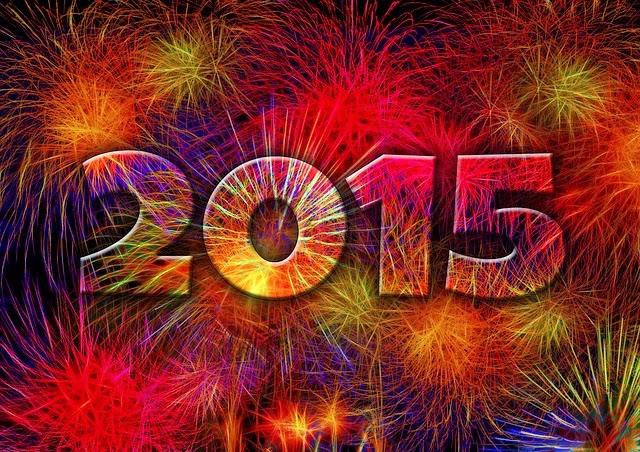 Once again, we will try to make it to Florida for an 8 day trip to Disney World. This time the trip is significantly cheaper - the theme park tickets are already paid for which means that is 3000 dollars we don't have to worry about. But this time, we can enjoy ourselves without stressing like we would have done if we would have went last year as planned.

This year will see us entering yet another year in our homeschooling ventures. Taxes will allow me to buy curriculum for next year (Math U See vs Saxton, Sonlight vs Memoria Press). The Schoolhouse review crew will give me an opportunity to review curriculum and products and to bring those reviews to my readers, but it also provides a way of providing curriculum to my kids that I wouldn't have been able to afford otherwise.

2015 will also be the year my daughter turns 16, which means learning to drive, boys and dating.. These are things I haven't given a whole lot of thought about but now its inevitable. My husband and I will have to sit down and figure out the rules to dating my daughter, only it won't be a sitcom, at least, not for us.

My husband is talking about possibilities outside of the military at this point. When April rolls around, he will only have 1 year left in his enlistment so the question will be whether to re-enlist or to find a job in the private sector with someone like Lockheed Martin. If he chooses to reenlist the question will be whether he can cross train into the field he originally wanted (Space Operations) or will he stay in the field he is currently in.

With all the uncertainties that 2015 might hold, one thing is for certain, it's in God's hands.. We will pray about it as we always do, hoping for answers or at the very least guidance as to what decisions to make. In that sense, 2015 will not be much different from 2014. 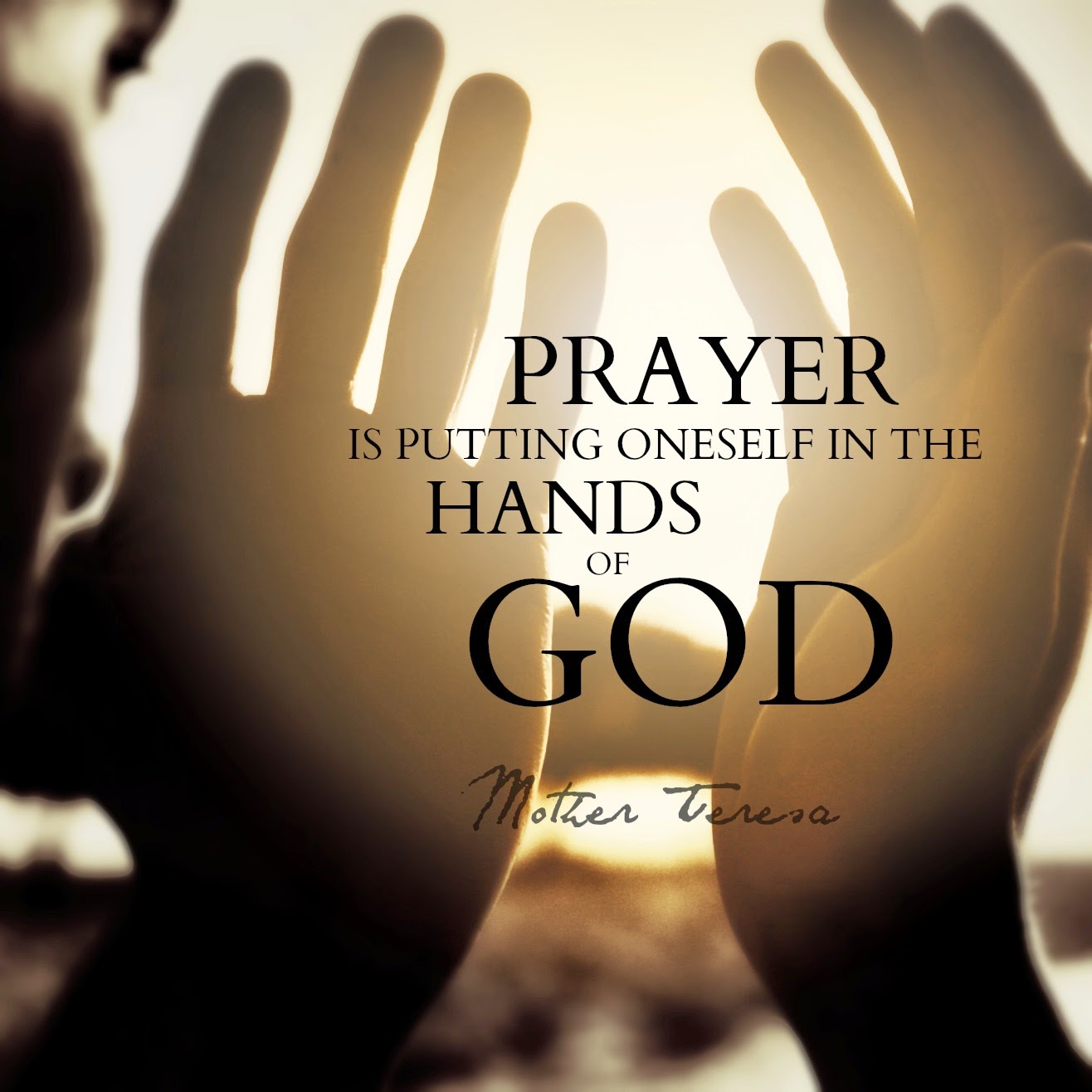 Then there are the prayers that are always there at every moment of every day- for the health and well being of those that I love. Whether it be my own family, my ex husbands family, my husbands family, I pray for them. I pray for my friends and acquaintances whenever I see them asking for prayer and sometimes when they don't ask for them. 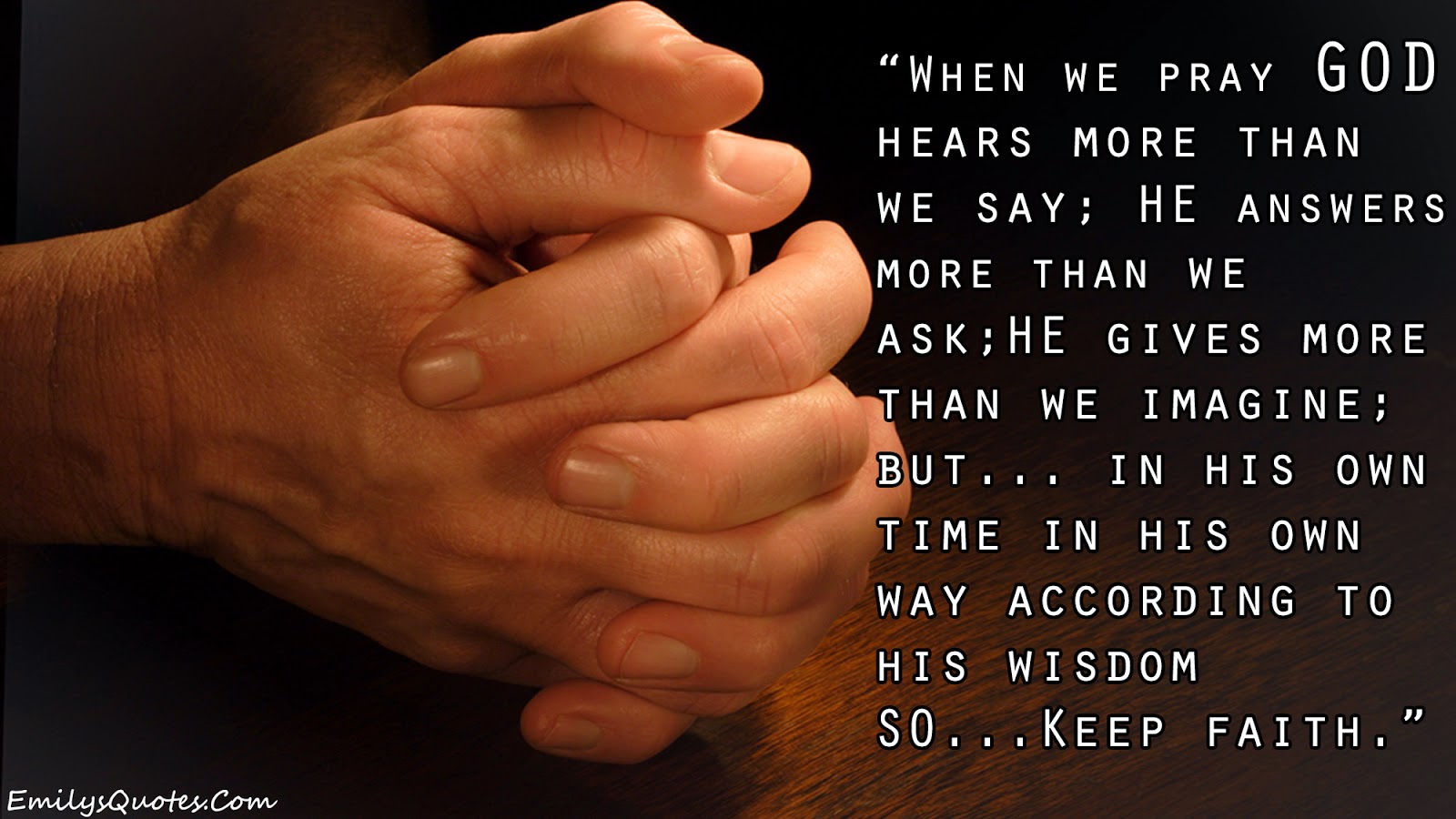 My final prayer is always for myself however. Maybe that is selfish of me. My prayer is to grow more spiritual, to set an example for my family. My husband is not a believer but it's hard to pray for him to find God if I cannot set a proper example for him.  So my prayer is for my faith to continue to grow, for God to use me in such a way that my family is able to at least want to pursue a relationship with God because of what I inspire in them.


The members of the Schoolhouse Review Crew would love to share their words for 2015 with you. Click on the banner below and read the wonderful messages of encouragement and inspiration they have to share with you :) 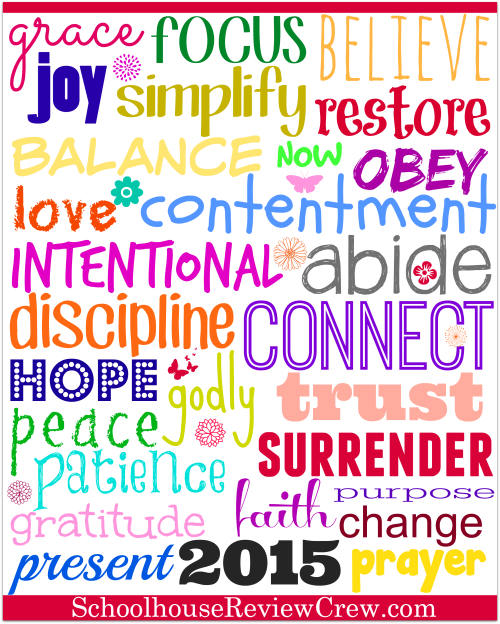 Christmas is about family and our Christmas was all about our family.  First, each kid got to select 1 present to open early. Then we watched Christmas Eve Service from the luxury of our home in California since Celebration Church in Green Bay, WI broadcasts online :)  So we got to listen to wonderful Christmas music along with a retelling of the Christmas story from the Book of Luke 2.  Then last night, we hoped in the car and went out looking at Christmas lights all over the base then came home, made some hot chocolate for everyone while we sat together and watched "The Polar Express". We've tried in the past to make watching it together our Christmas Eve tradition but each year, the kids haven't paid much attention to it. This year, however, they sat and watched the entire thing.  We spent a good portion of the night tracking Santa on the NORAD (yes, my two younger kiddos do the whole Santa thingy). When Santa was in Kansas, the kids put out gingerbread cookies and milk, hung the "Santa Key" outside on the door and went to sleep. Mom and Dad spent the rest of the night (til almost 3am) getting everything just right for the big day. The kids woke up early, opened gifts, mom made "Christmas Crack" sticks for breakfast and then Dad grilled some wonderful burgers for dinner. The kids really enjoyed their gifts and got everything they wanted.. All in all, we had a wonderful Christmas!!

From My Family to Yours, I Hope You Had a Merry Christmas..

Posted by Brenda Prince at 11:15 PM No comments: 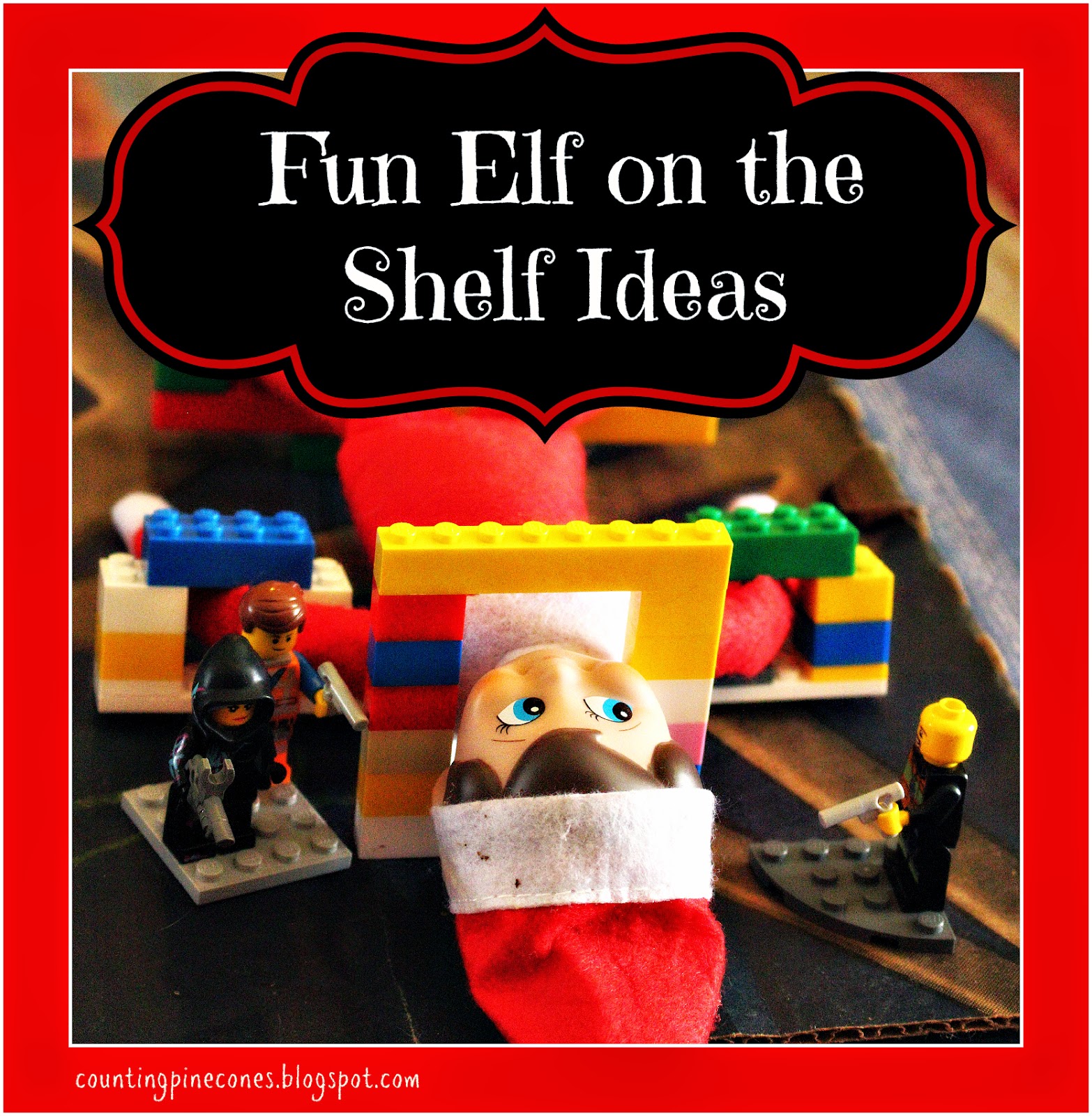 This year we added the Elf on the Shelf to our Christmas fun.. I think Charlie mainly wanted one to be able to do all the fun things he's been seeing online for the past few years but for some reason, it turned out Mom was doing more of the trying to figure out what exactly to do with this lil guy. But the kids had a lot of fun waking up each morning and trying to find him. I don't think they really believe he's real and we didn't really push that all too much, I think it was more the fun of what would he do next that they enjoyed.. So before he goes back to the top of my closet North Pole I figured I would put all our Jack the Elf pictures up for prosperity (and so Mom and Dad can kinda remember exactly what we did with him this year.. lol). Unfortunately I forgot to take pictures of some of the stuff we did, like drawing on our photographs and for a few days, we actually hid Jack and told the kids he didn't come home (they were being bad).. But for the few weeks we had him, we did have some fun.

Posted by Brenda Prince at 11:44 PM No comments: