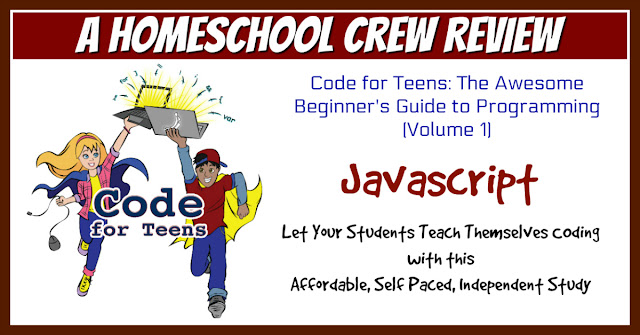 My oldest daughter has always shown interest in computer programming and writing script. Unfortunately, her high school did not offer anything beyond just a required computer course, so she never had the opportunity to build upon that interest.  While Garrett has played around with programming using Scratch, that's a bit underwhelming for teenagers. 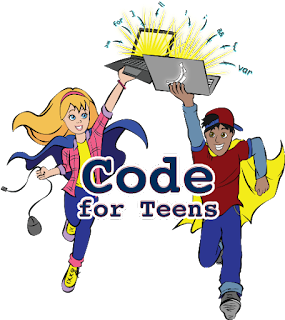 When we were given the opportunity to review the book Code for Teens: The Awesome Beginner's Guide to Programming (Volume 1) written by Jeremy Moritz and published by Code for Teens, I hoped that it would be something that would help fuel her desire to learn.    I knew either one of two things would happen - she would either jump in hardcore and quickly lose interest or she would realize that it was indeed something she would throughout enjoy.  (You'll have to read on to find out which was the case). 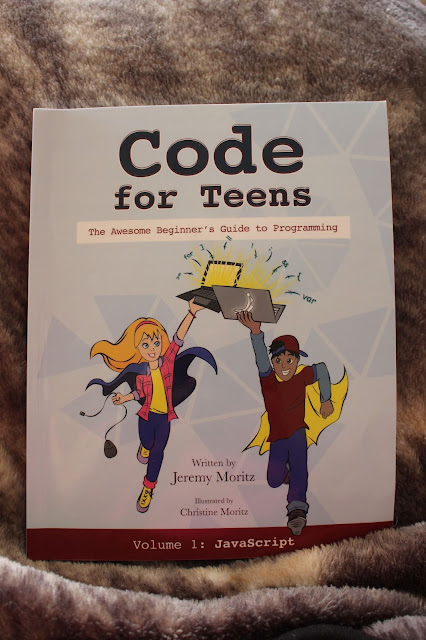 Code for Teens:  The Awesome Beginner's Guide to Programming (Volume 1) is the first book written by Jeremy Moritz and illustrated by his wife, Christine Moritz.  A homeschooling family of 6, Moritz, a long time software developer and senior software engineer, wrote the book with the hopes of students to learn computer scripting with no assistance of the parent.

The book itself is the first installment of a future series and focuses on Javascript,  a form of computer programming that allows the writer to create interactive effects that are contained withing the confines of a web browser.  This includes things such as interactive maps, animated graphics or video players that help make visiting the website a more user friendly experience.  The full color, 221page book consists of 10 chapters as well as a Forward, Introduction, A Word for Parents, and ends with a Conclusion chapter, Answer Key and a Glossary of Terms.

Each chapter helps to build a foundation that is built upon in each sequential chapter.  Students are given repetition, review and drilling as they learn through hands on work and instruction, allowing them frequent opportunities to use what they are learning in practical lessons and activities. 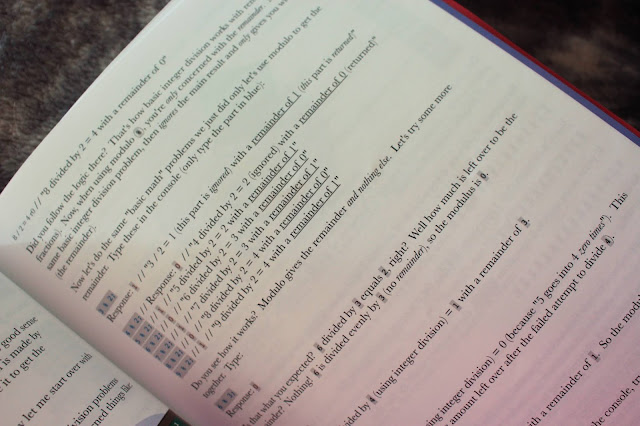 The writing itself is geared to hold the students interest.  The writing style is not of that of a typical textbook but instead more like a friend writing an email with detailed instructions that walk the student through accomplish something. 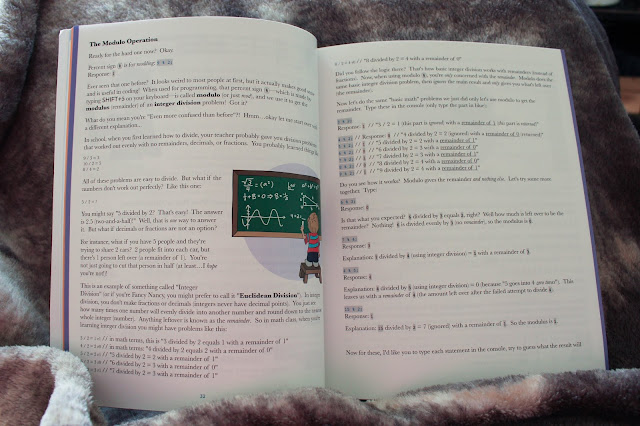 After reading the Word for Parents section of this book, I gave the book to Alyssa and basically told her to have fun.  That meant for the entire review period, other than asking her if she did her programming that day, I was completely hands off, as the book suggested. 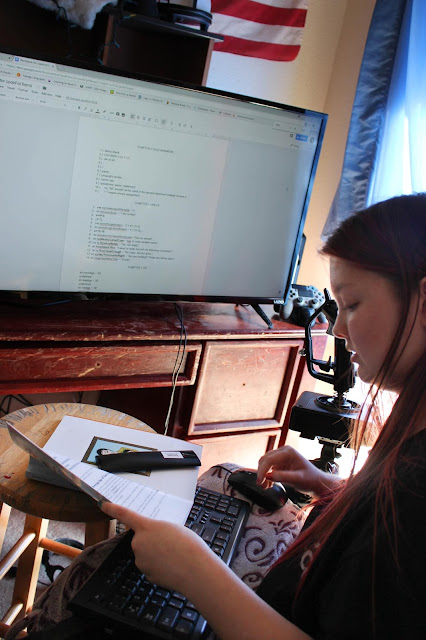 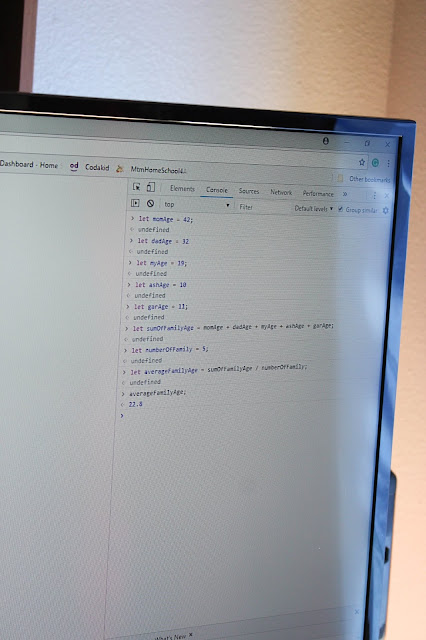 I think it's safe to say, she enjoyed working through the book. 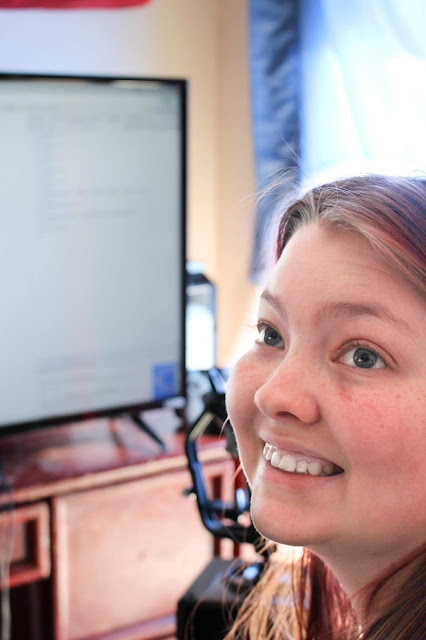 Also, as your typical annoying teenager, she had to tell me repetitively how much she enjoyed the writing style of the book.   It must be REALLY good when I'm trying to decide what type of chips to get her in the supermarket and this is the text message that I receive. I guess, the easiest thing would let Alyssa tell you about the book herself :)

What Alyssa had to Say About It:


" I have always liked coding so when Mom gave me this book I was excited. I felt like I raced through it going through a chapter in a week. I read the chapters, did the reviews, quizzes, and DIY's. I learned quite a bit, from what Camelcase is to how to write comments and even what '%' means. I was able to reach Ch.4 so far and can't wait to finish.

Each Chapter contains the lesson, examples, drills, reviews and of course the quiz. All of the answers go into what's called the Work Book. This could either be online, Word or Google Docs, or on physical paper. I opted to use Google Docs since it's what's recommended. The book also recommends using Google Chrome, which I also used, and has instructions for Mac or Windows. (Because some of the keys are slightly different.)

The DIY's were my favorite things to do. One of the problems was about a P.E. class that needed to be divided into teams. So using the modulo, I was able to divide the sixteen students into four different teams for 4-square.

There was one thing I always hated about school, one assignment I dreaded, 'Go home and read this chapter on this'. Everyone, including myself, would groan and complain. Textbooks in general, suck, they are boring and being able to understand what we read was difficult. This book is vastly different. Instead of reading 'blah blah earthquakes blah blah plates' you read, one of my favorite quotes on the backslash, "Some people don't trust your new friend backslash. They're probably afraid that the minute they start to get close, he'll slash them in the back! Well, relax. He's here to help!". That's only one example. There were many times I actually laughed at what was written. Even the example codes have funny parts.

I love the idea of coding, but as I said before, textbooks were intimidating to me. This book teaches in a way that I could actually understand, with easy to follow examples, drills and DIY's. So meaningless to say, I PHYSICALLY CAN'T WAIT UNTIL THE NEXT BOOK!!!!!! By the way I should mention all of the illustrations, at one point in Ch.4, there is a picture of doge! (I love this book. *giggles*) "
There you have it, straight from a teenager.  (Thank you Alyssa for writing that portion for me).  I'm looking forward to Garrett being a bit older and allowing him to also work through this book, as I think it will be a great primer for him as well.  I'll most likely use it with Ashleigh as well once she's old enough and shows some interest in learning to write script. 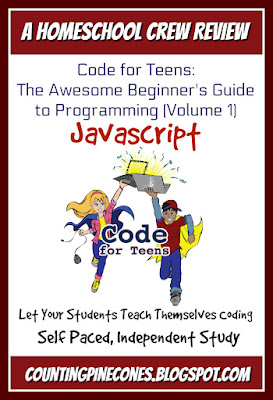 For more information and to purchase Code for Teens: The Awesome Beginner's Guide to Programming (Volume 1), visit their website.  You can also find more information on facebook at: https://www.facebook.com/CodeForTeens/