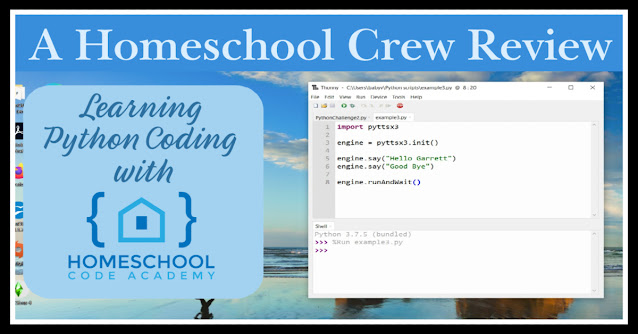 For the last month, the Homeschool Crew family have been using Python for Beginners: Learn Coding at Home from Homeschool Code Academy. 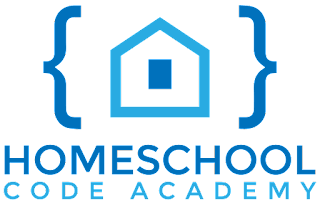 Homeschool Code Academy is an online based curriculum for homeschool students to teach computer coding to students. Designed by Matt Bohn, a homeschool parent who is also a professional software engineer, business owner, homeschool graduate, and college graduate, the website offers self paced video lessons as well as hands on challenges for your homeschool student that allow them to put the skills they learn to use. Middle school and high school students taking this  introductory Python course will learn to make their computer speak, draw colorful 2D graphics, and create an arcade style space game complete with sound effects and keyboard controls. 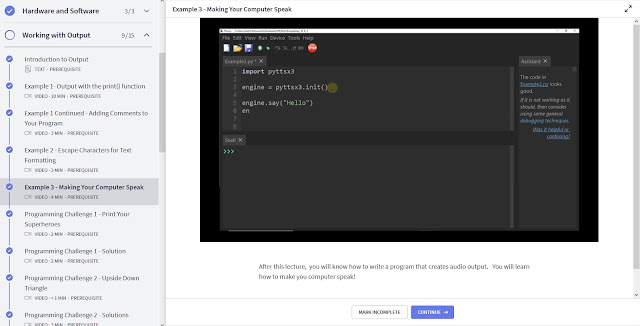 For this review, we decided that Garrett would be the one taking the Python course. You may remember recently we attempted another similar course and it was over his head from the start, so I was a bit reluctant in trying this course, expecting similar results.  However, nothing could be further from the truth.

Mr Bohn's teaching approach really seemed to have worked well for Garrett.  The lessons are extremely precise but are taught in such a way that he was able to follow along pretty easily without much help from me.  My role has basically been just take video and pictures as he works thru the lessons.

The program required me to download a secondary program called Thonny to the computer.  Thonny is an integrated development environment for Python that is designed for beginners. Basically, it's where he writes his code and runs the scripts that he's writing.  The program was free of charge and is the program instructor Matt Bohn uses while teaching so it makes it super easy for Garrett to follow along using the same program.  It also helps that Mr Bohn doesn't speak extremely fast or flies thru the lesson but instead takes his time, explains the basics and even shows examples of common errors in writing the script he's teaching really helps for a better understanding of the material without quickly going over Garrett's head.

While working on the lesson, Garrett just keeps the thonny program open while he's watching the lessons and he can pause the video and work along with Mr Bohn on each lesson. 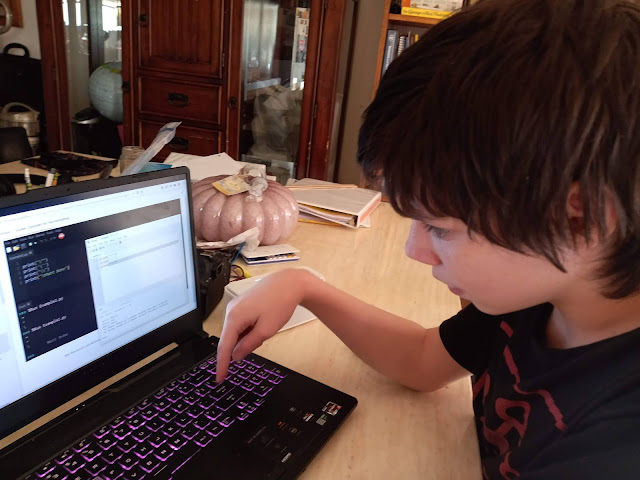 Here's a video of one of the scripts Garrett had to write in one of the lessons.  For this lesson, he had to create a script that told the computer to speak.   He had a TON of fun with this particular lesson as he quickly realized that the computer would say anything so long as he wrote the script, including telling his sister to go take a bath.

After the student completes a portion of the course, they are given a few different challenges where they must meet an objective using the skills they have learned.  These challenges should first be attempted by the student on their own, however, if they get hung up, there is a video key that provides the answer for the challenge, so the student can see where they struggled and attempt it again.

Garrett has actually done really well in the challenges (again, I think this says a lot in regards to the instructor and the method of teaching of the course).  In the video below, Garrett was using the "Print" command to write a script in which he created an upside down pyramid.

I really like the step by step process this program is using and the challenges that help to allow Garrett to use what he's learning multiple times before moving on.  These challenges haven't been straight copied from what he scripted in the lesson, but instead makes him use those skills in a completely different way, requiring them to use critical thinking skills.  This really helps for them to use those skill in multiple ways, rather than just regurgitate the material from the lesson.

I also like that this course is self paced.  With Garrett being special needs, he tends to need a bit more time to work on stuff and he does tend to get overwhelmed when he struggles with something, resulting in him shutting down.  So far, the pace of this course has been perfect for him and we're about a fifth of the way thru the course, but I know if he needs to go back and review, he can rewatch videos without an issue.

Overall, we're really happy with this course and I think Garrett is learning a lot from it.  I look forward to seeing how he progresses with it and see how he takes what he learns and transfers it to writing scripts for his Arduino Uno and Raspberry Pi.

For more information about Homeschool Code Academy and the Python for Beginners course, be sure to visit their website.  You can also find them on the following social media sites: 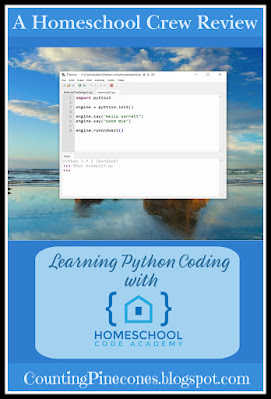 Members of the Crew have been using Python for Beginners with their families for the last month.  Be sure to click the banner below to read their reviews today.

Posted by Brenda Prince at 9:10 AM