By now, your fridge is probably packed full of leftovers, the dishes from last night probably still in the sink (unless you were smart and got paper plates and plastic forks) and maybe you're out running the roads for Black Friday shopping. Either way, hopefully you had a wonderful holiday with your family and are getting a somewhat relaxing breather before the madness of the Christmas shopping starts.

We had a nice quiet Thanksgiving of just myself, my husband and the two smallest kiddos.. My oldest daughter ended up having to hop a flight to Houston to go visit her father as we alternate each year as to who gets Christmas and who gets Thanksgiving. Since Alyssa wasn't here, we decided to just do a very simple meal for the four of us. My husband baked a small ham and made mac and cheese while I baked some
sweet potatoes and made some Parmesan bakes greenbeans.  Every weekend we get a huge box of organic produce straight from the farms which meant some awesome sweet potatoes and fresh green beans for us.. LOL  (Although, now that I'm thinking about it, I totally forgot about the acorn squash and will most likely be using it as well as the pumpkins we got for bread this week..).


Usually we make the full Thanksgiving spread. My husband makes an AMAZING turkey each year as well as homemade cranberry sauce while I take on the sage sausage and green apple stuffing and whatever else we have. I enjoy the holiday cooking as both of us are in the kitchen together. Usually Charles will put on a nice jazz station on Pandora and we will relax and interact while cooking up our great feast. In years past, we've usually had at least 1 friend over, usually more. Being a military family living on a base, some of our friends are unmarried and might not be able to go home to their families for the holidays and so the more the merrier.  This year, however, one of our normal visitors is currently deployed to Korea and our other friends who usually come to eat have moved off to start other ventures outside the military, so it was just us.

But even with just the four of us, it was nice. We sat together and watched the Macy's Parade and then decided to watch the Wizard of Oz afterwards. The kids ate their ham and their baked potatoes (green beans are evil as far as they are concerned) and enjoyed the family broadcasting. We all enjoyed some pumpkin pie and blueberry cobbler for dessert and just had a really nice family day together.

This morning, we got up to do something we have never done before.. We braved the Black Friday craze.. We typically avoid Black Friday and any shopping establishments as much as possible during the holiday season. However, this year, we knew we needed to replace our Christmas tree. Charles and I bought a pre-lit tree probably 8 years ago and I was never really happy with it to begin with. It was tall (7 foot) but very skinny.. I tend to like full trees. But we made due with it and every year, we decorated the tree as a family. Each year our family grew from 3 of us (Alyssa was from my previous marriage of 13 years) to 4 and then to 5. Each year following Thanksgiving, the tree would come out and I would have to figure out all the wires to get the lights to work right.. the decorations would come out and get sorted through as either breakable or not and the little ones would get to put the non breakable stuff on the tree while the rest of us would tackle the more fragile pieces.  Every year, we would always be happy with how the tree turned out, even if I liked a fuller tree.


Last year, we pulled the tree out and plugged it in and it wouldn't work anymore. We troubleshooted things like fuses and such, but nothing worked.. We made due, buying a couple of cheap strands of lights to go around the tree and once again, we were happy with the outcome but we knew that this year, we would have to replace the tree.. I had my eye on one in particular at Walmart and we planned to head over there this weekend and pick it up. Then I saw that one of the Black Friday deals was 30 percent off the tree, so we debated if we would be willing to deal with Black Friday madness in order to save a few dollars (okay, more than a few - we're talking 45 dollars.. lol) .  Last night, I just happened to look on Home Depots website and saw they were having a Black Friday deal for a particular Christmas tree for $79, which was $120 off the normal $200 dollar price. I showed Charles and we both agreed, it was a better tree.. It had LED lights rather than the regular ones (hey, we like to save energy) and it was a "Quick setup", all we had to do was put the pieces together and they plug themselves in, no wires to figure out.. It had a remote control so we wouldn't have to worry about climbing behind the tree and presents to either plug it in or unplug it.. It had both white and multicolored LED lights that could be switched between with the use of the remote.. and best of all, it was a pretty full tree, no more tall, skinny trees.. LOL  (Oh and did I mention it was only 80 dollars???)

The kids got tucked into bed at their normal time and I told them that I would be waking them up before the sun came up because we were going to go get a new Christmas tree.. They were excited to say the least.. We knew Home Depot was going to open at 5am and we knew that if we wanted any chance of getting the tree, we would have to be there at that time.. 4am rolled around, we woke the kids up, loaded up in the car and headed that direction. We got to Home Depot about 5 minutes after 5 and saw people coming out, each with two of these Christmas trees.. So my heart sunk when we saw the pallet which held the Christmas trees - completely bare.. That's okay, we told each other, there were other trees that were also on sale and while they weren't 80 bucks, we found one we liked for 150 (the last one they had).. It wasn't LED but it was still pretty.. But while Charles was going to grab a cart, one of the employees told me that they had a few more 80 dollar trees that were in the back of the warehouse and they were loading them on a pallet to be brought back up. He told me where to wait and a few moments later he came back and told me they were handing them out a little ways behind me. We got over there just in time to put our hands on one of the trees we wanted (by the time I got there, there were only 3 left)..

The kids were wonderful and were happy about the tree.. Home Depot had brought out coffee, hot chocolate and donuts for the shoppers, so each kid got to pick 1 donut for our trip home.. And since we didn't spend $150 on a tree, my husband was a sweetheart and bought me something I'd been wanting for a while now - a 5 foot lighted deer and sleigh to go out in the yard..  (And we got both, along with two Poinsettias for less than the other tree would have cost) 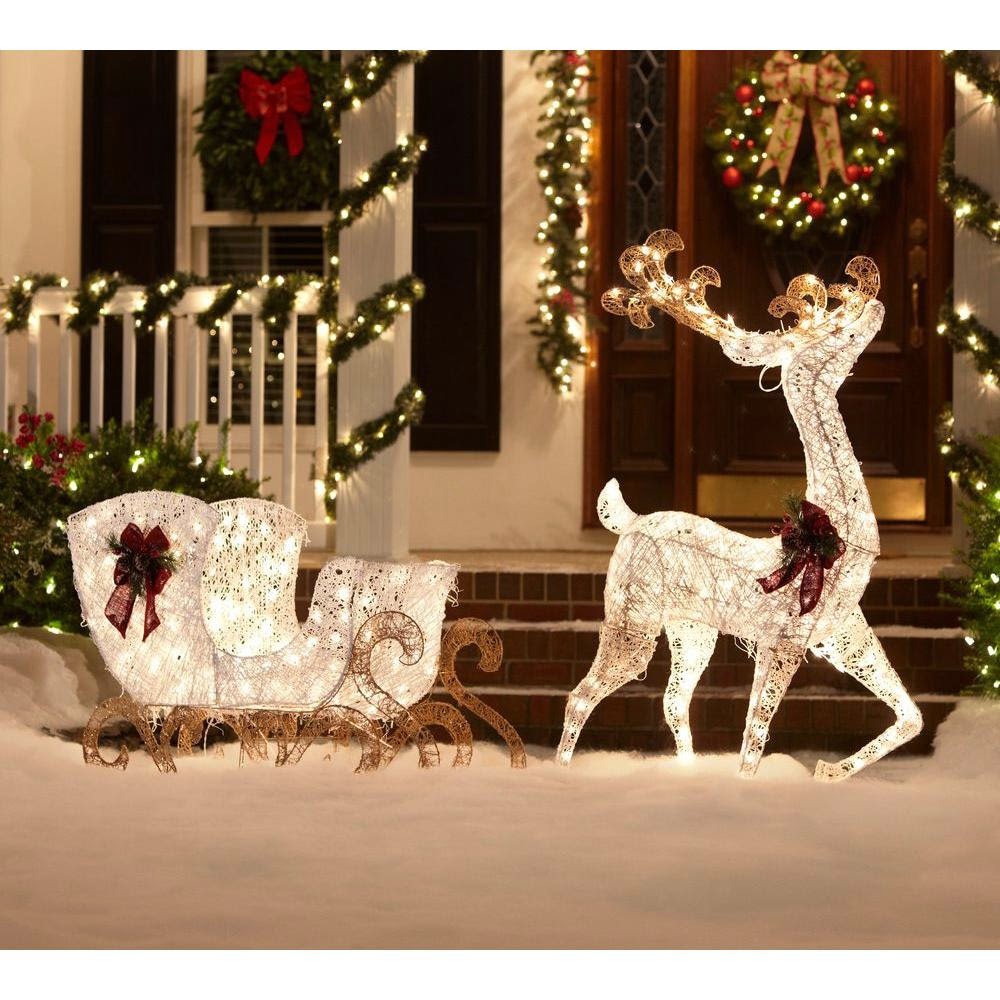 I hear horror stories of Black Friday and I know it is crazy. I see the videos of the pushing, the fighting and the chaos that erupts over people trying to save a few dollars on a TV or a computer... I'm so glad we didn't run into that type of behavior at Home Depot (especially since I had my kids in tow).. Instead, everyone was nice to each other, willing to tell others where they found a particular item and even telling others "Good Morning". (Another shopper is the one who told me they had donuts for the shoppers as she smiled at my kids). That's the type of behavior I want my kids to see..

If anyone is a teacher to my kids, however, it would be myself and Charles.. and while we took the day off from school, I do believe they learned some valuable lessons yesterday. One being that Thanksgiving isn't about the turkey and the spread, but about being together, enjoying each others company. They also learned about disappointment - they knew I wanted that particular tree and they knew that when we got there, that tree wasn't available anymore.  They heard the conversation between my husband and myself when we decided "That's okay, lets find another tree we like" and so they learned that life is about compromise. We can't always get what we want but we can be just as happy with what we can have.. And finally, they learned that sometimes, even when you are disappointed, something happens and can change that for you. The tree we wanted suddenly became available, we were able to get it after all.

We strapped that tree to the top of our car and made the trek home (we live about 30-40 miles from Home Depot). We laughed at the sound of the bungie cords vibrating at highway speeds (and even figured out at what speed the bungies started vibrating and making noise (15 miles per hour).. And as we drove home, we watched the sunrise together, something we never do because we are usually asleep. (I should also mention that driving up there, we saw 2 very bright shooting stars as well).. Together as a family, we worked to unload our loot, the kids opening the door for dad while mom heated up a hot bad for dad because he kinda hurt his back putting the tree on top of the car.  Once everything was inside, we all kinda looked at what we got and we all said how happy we were that we were able to get it.

We will hopefully enjoy that 80 dollar tree for many years to come.. Tonight we will break out the hot chocolate, put some "Go Fish" Christmas music on the play (the kids love their version of "The Little Drummer boy") and we will decorate the tree to some extent, as well go buy more ornaments this weekend for Alyssa to help decorate when she comes home Sunday.. And hopefully each year we will pull it out, fluff it up and once again bring out the decorations and decorate it together. The kids might not remember our crazy Black Friday rush to get it as other memories crowd it out but I will always remember when we pull that tree out.

We braved Black Friday.. We survived.. and we all learned from it.

Posted by Brenda Prince at 1:53 PM