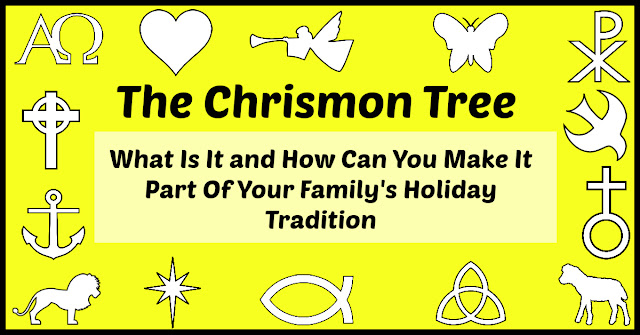 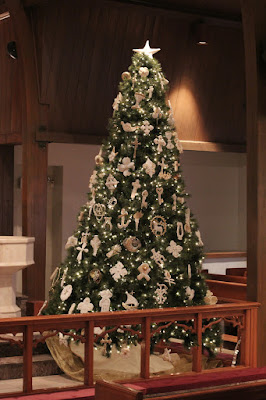 When I was young one of the things I looked forward to each holiday season was our church's Chrismon Tree. It was a beautiful tree, towering about 15 foot tall, covered with white and gold ornaments and lit brightly with white twinkling lights. Each year the tree would be on display inside the main sanctuary for the Advent season but without a doubt one of my favorite memories was seeing it glowing bright one last time during our Christmas Eve Candlelight services.

Chrismon trees typical are put on display during the four weeks of the Advent seasons and are removed following Christmas day. The term “Chrismon” is a combination of the words “Christ” and “Monogram” and literally means the monogram of Christ.  Some people might refer to the Chrismon tree as the Tree of Christ.   Chrismon refers to the special ornaments that are placed on the tree rather than the actual tree – the Chrismon tree being a tree with the Chrismons on it. First displayed in 1957 at Ascension Lutheran Church in Danville, Virginia, each of these Chrismons are symbolic to the life of Jesus Christ. The ornaments are always white and can be made with felt, foam, beads or cloth with gold embellishment such as ribbons, glitter and bead work. Often handmade, Chrismons can be made in a variety of crosses, shapes, objects, letters and numerals.

There are roughly 50 symbols that are used as Chrismon ornaments although some trees might have more or less.    There are many books and websites that provide ideas and patterns in making your own ornaments and what each one represents but with a bit of creativity it would be very simple to design your own.   Many people use beads of white and gold threaded on wire to form each shape. I personally love the look of the foam ornaments as they have a really nice 3D look to them.   You could even craft them with salt dough, which the kids will be doing later this week.  No matter how you decide to craft your ornaments, it's a great activity to bring the entire family together while learning about the symbolism each ornament represents.

While it would be hard to list all of the ornaments, there are many books as well as guides online that can help you visualize each of the various ornaments. However, here are a few of them as well as what they represent.

The Alpha and Omega represents Christ who said “I am the beginning and the end, the first and the last”

The Triangle – represents the Trinity of the Father, the Son and the Holy Spirit.

The Three Intertwining Circles – the eternal quality of the Trinity with no beginning or end.

The Latin Cross – represents the cross that Jesus was crucified on.

The Cross Crosslet – Representing the spreading of Christianity to the four corners of the world.

The Anchor Cross – represents a time when Christians were prosecuted for their faith and used this symbol to avoid persecution.

The Cup – represents Christ's suffering as referred to in Matthew 26:39 “If possible let this cup pass from me”

The Kingly Crown – The kingship of Christ and his victory over sin and Death – The King of Kings.

The Shell With Drops of Water – symbolizes Baptism.

The Maltese Cross – The eight points symbolize the Beatitudes while the cross itself is an emblem of John the Baptist. It is formed by four spearheads with the points touching the center.

The Sand Dollar - known as the Holy Ghost shell. The markings recall events in the life of Christ.

The Cross and Crown - symbolizes the rewarding life for Christians after the death of the body. And also symbolizes that Jesus is King of Kings.

The Lamb - the symbol of Jesus Christ.


Three Fish United to Form a Circle - reminds us that all three persons of the Trinity contribute to our salvation.


The Son of Righteousness symbolizes that like the sun, Christ the Son of God is the source of light and life to those who believe in Him.


The Angel of God – Symbolizes the angelic announcement of both the birth and the resurrection of Christ.

The Heart – the symbol of charity.

The Butterfly – a symbol of the resurrection and life everlasting for the believer.

The Christmas Rose – The Nativity of our Lord

The Lyre – represents the joy in praising the Lord.


The Ark and the Rainbow – Symbolizes God's promise

Next year, I hope to have a second tree for the inside of our house dedicated solely to the gorgeous Chrismons while the kids have fun learning what each of the beautiful ornaments represent. And maybe they will remember that tree with as much fondness as I still hold towards the one that graces the chapel at First Christian Church in Port Arthur, Texas.   If your ever in that area during the holidays, go take a look at it.  Maybe you'll be even be tempted to add this tradition to your holidays as well. 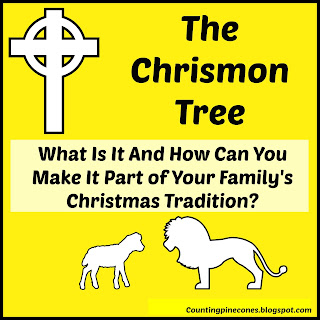