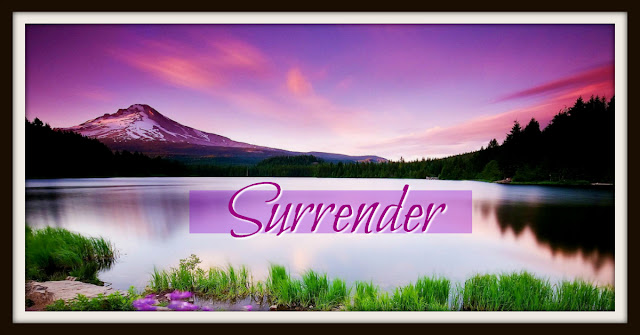 The Thanksgiving holiday is over and I'm sure I put on about 5 lbs just from one meal alone.  I hope everyone else had a wonderful holiday spent with family and friends.

It's 11:15pm here, so it's still officially Friday, so that means it's time for 5 Minute Friday.  This week, Kate at Heading Home has offered up the word Surrender for the word of the week.  If your interested in joining in with the Five Minute Fridays, be sure to click the button below

Surrender is a concept that is very hard for me.  The concept of completely ceasing resistance to another person, laying our vulnerabilities and those things that can hurt us the most out for another to see?? This is a concept that goes against every single coping mechanism I've ever had.  As a sexual abuse survivor, I tried to appear strong,  a brick wall without feelings and who was against the world and the world better realize I was a formitable force.. I grew up knowing I was the only one who could protect me and as such, I didn't let others see the real me.

And then I met my ex husband.  I thought he loved me - I thought I loved him.  And so, I surrendered. I gave him access to all of me that I had hid away behind the facade.. And in the long run, he used much of those vulnerabilities against me.  I swore I would never let anyone in again.

I learned it's hard to be a "lone wolf".. I took a chance and once again let someone.  10 years later, he has never turned anything against me or exploited those weaknesses against me.. I don't feel like I've given myself over to the enemy but fond a formidable ally instead.

Learning to trust my second husband eventually led to the ultimate surrender - Giving myself back to God.  I turned my back on him for so long that it was very hard to admit my mistakes to him.  How could he forgive me for the things I'd done?

That surrender has led to me becoming the best person I have been in a long time.  I'm still rough around the edges, I still hold some things behind a barrier, but I am more lax on how hard I hold to those things. If someone sees me cry at a sad scene in a movie, it doesn't mean I'm weak, it means I'm a person with feelings and who shows empathy toward what I am seeing.   If I cry reading a Bible verse or even today when listening to "Mary, Did You Know" and teared up on the verse "When you kiss that little baby, you kiss the face of God", it doesn't make me vulnerable - it means that my heart is open to the pure joy of knowing I have a Savior who loves me.