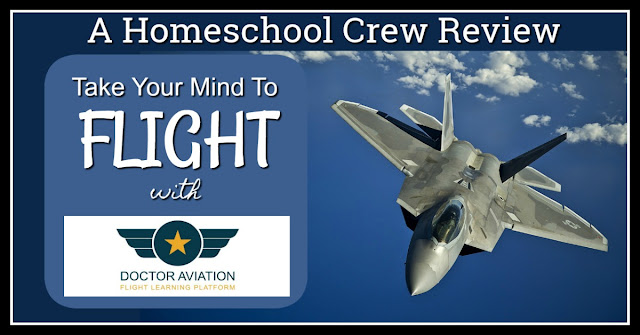 When I was young, I saw the movie Top Gun for the first time. From that day onward, I tell everyone that my first love was Tom - not Tom Cruise mine you, but the F-14 Tomcat. At the age of 10, I knew I wanted to fly jets, I was going to go to Miramar, I was going to train with the best and I was going to zip over the skies at Mach 2.  I learned as much as I could about the history of aviation, joined the Civil Air Patrol and my childhood idol was Chuck Yeager.  I studied hard, planned out where I would attend college, all with the plans of joining the US Navy as an officer and leaning to fly.  Unfortunately, genetics had other things planned for me, because at 5'2, I was too short to fly jets for any branch of the service and my dreams came crashing to the ground.  I did flying a few aircraft, a small piper cub and a smaller Gulfsteam, but fighter jets would never happen for me.

However, that love of all things aircraft and flying has stayed with me all these years. That's why I was really excited to get to review Doctor Aviation, an online series six month aviation course produced by Daryl Smith that is designed to instruct those interested in aviation about the mechanics of flight.

Doctor Aviation is a 15 session video course that guides students through various aspects of the mechanics of flight, the history of flight, and pioneers in the aviation world through the use of videos, handouts and recommended outside resources.  The course is designed for high school students as well as adults who would like to learn more about the aviation world. 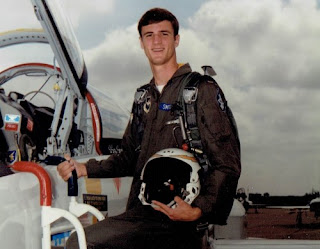 The video courses are taught by Daryl Smith who served 24 years as an Air Force pilot with more than 2,000 flight hours under his belt. During his time in the Air Force, he served as a research pilot, reached the rank of Command Pilot and then went on as a flight instructor for the United States Air Force Academy.  He is the author a highly praised book entitled Controlled Flight into Terrain (CFIT/CFTT) and is currently a university professor.  Dubbed "Doctor Aviation", Daryl Smith designed this lecture based course to instruct those interested in aviation and to fuel their knowledge in the industry.

Through the course of the 15 video lectures which run between 50 minutes to an hour in length, students are introduced to concepts such as the Bernoulli's principle and propulsion, basic aircraft mechanics such as foils, rudders and air frames, as well as other aviation jobs beyond flying, such as ground support crews and air traffic control. Each video lesson covers three topics per session: First is Technical Trivia which discuss an aviation principle ~ aerodynamic concept, an instrument, an aircraft part, or a maintenance function, followed by Notable Innovators where students learn the history of an influential person in the field of aviation and how that person contributed to the field. The final section is titled Legendary Aircraft and Events where the discussion is about an important event, aircraft or accident that occurred in the history of aviation.

Once logged in, the student's dashboard makes everything easily accessible. The current lesson video is found at the top of the screen and can be maximized in order to make it bigger.  Any reminders are located below the current session, alerting the student that an examination is coming up or that study notes are available.  Below this is the Additional Resources section which contains the printable guided notes and additional recommended resources.  A "Mark as Complete" button allows the student to mark the lesson as done so that next time they load up the student dashboard, they will be taken to the next lecture of the series automatically.

In addition to each video lecture, a downloadable PDF file of printable handouts are available in which to take notes and to keep on hand as a study tool when offline from the course.  These handouts come in the form of fill in the blank where key points from the lectures are emphasized in a bullet style format. There is also a downloadable PDF file for each lecture that offers additional reading in the forms of online articles, book suggestions, photographs, movies and videos that tie into the discussed topic.

I don't mean to toot my own horn, but I will say that even before working on this course, I had a pretty extensive general knowledge of aircraft, flight mechanics and the history of aviation.  There was a time I read everything about the world of flight that I could get my hands on.  As a teenager, I began to learn to fly thought Civil Air Patrol, taking the controls of a Piper Cub and then later of a Gulf Stream G650. I've been up close and personal with the AH-64 Apache helicopter and I've helped my husband study many of the operations needed for emergency engine shut down and troubleshooting for the F-22.  I've pretty much been around aircraft of some sort all my life.

With all of that said, I found plenty of information that I had either forgotten or hadn't learned while viewing the video lectures on Doctor Aviation.  Daryl Smith does a wonderful job of explaining and displaying topics such as the axis of the aircraft, something that can be very confusing from just trying to read about in a text book, or the forces that are applied on the aircraft during takeoff, landing and flight.  He has a calm presence while speaking and has a great way of putting technical topics in terms that are easy to understand for those without any previous knowledge and he often demonstrates things such as wing flaps and rudders using a VANS RV-10 single engine aircraft that sits in the hanger beside him while he speaks. 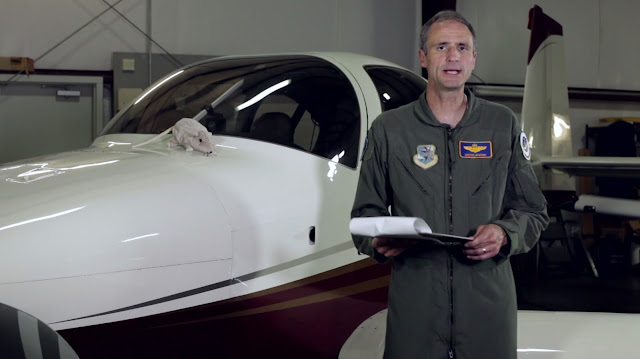 One thing I really liked was that I could mark a lesson complete and then the next time I brought up my dashboard, it would show me the next lesson available.  The website also kept track of where I was in the video for each session, so if I stopped in the middle of a lecture, it was very easy to pick right back up where I left off without having to rewatch or try to find where in the video I was previously at.

I also really appreciated the PDF guided notes. These helped me to stay focused on the material being presented as I filled out the handouts and gave me something to review before starting the next lesson.  Having the hand outs helped me to pay closer attention to the lecture, in an effort to make sure I filled in the correct answer and completely filled out the pages. 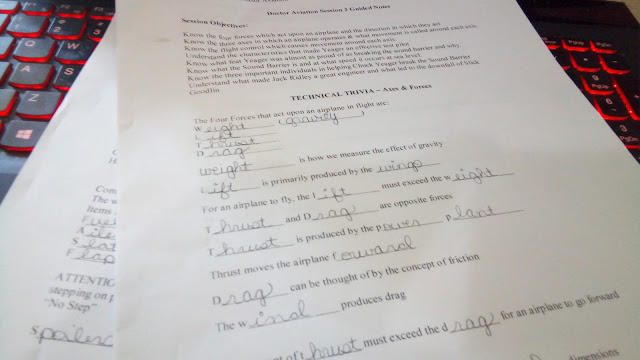 Without a doubt, however, my favorite part of his lectures were the Notable Innovators section.  Many of these historical figures are what you would expect when discussing the aviation world: Chuck Yeager, the Wright Brothers, Amelia Earhart and Neil Armstrong. However, there are other innovators who are not commonly thought of when it comes to flight, such as Daniel Bernoulli who makes an appearance in Session 4.   I previously learned about Bernoulli's Principle (which was important in designing the wings of aircraft) not from my love of aviation but from my career in respiratory therapy and Lung Pathophysiology.  Anyone in the medical field would also recognize his name as his principles also had much to do with monitoring blood pressure.


Since Chuck Yeager was a huge idol of mine when I was young, I especially enjoyed the lectures about him.  And while I already knew of the history that this base played in the lives of Yeager, as well as Neil Armstrong, it was really neat to see my home, Edwards Air Force Base, talked about and shown in the videos.  While Ashleigh and Garrett didn't sit with me for the more technical sections of the lectures, they did often join me in watching the sections about Notable Innovators and Legendary Aircraft, so they also learned about Chuck Yeager and his history here at Edwards.  This reminded them that we had a statue that I had pointed out many times in the past of Yeager on our base and they wanted to visit the next time we went to the library.  We have been here 7 years and had never paid it a visit prior. 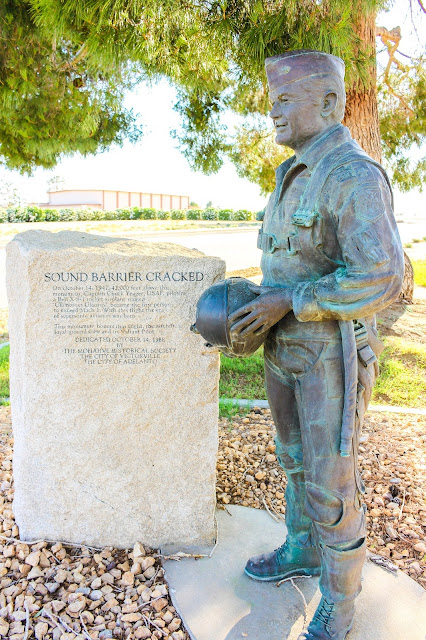 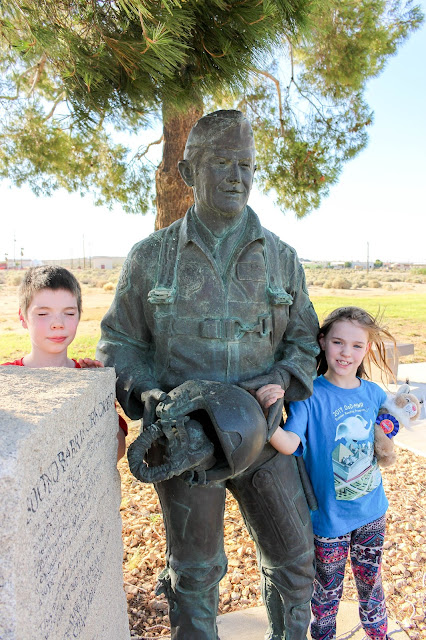 Seeing the statue, we talked about what we had learned from the lesson, most notably about how he designed his helmet himself for his sound breaking flight.  It was a really neat experience for the kids and they immediately wanted to check out books from our library about Chuck Yeager to learn more about him. Luckily our library had a few. 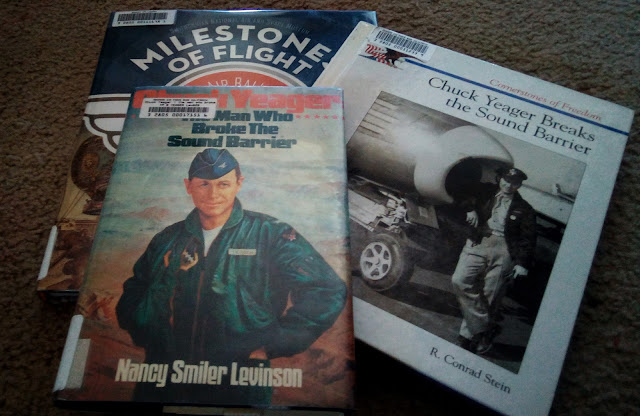 Who knows, one of these two might also get the flying bug after watching these lectures with me and reading about Yeager and Earhart.

We also have access to the remains of Pancho Barnes Happy Bottom Riding Club.  Pancho Barnes and her club makes mention in the lessons in regards to Yeager (and I'm sure it will be mentioned in the lesson about Neil Armstrong).  While there's not much to see anymore beyond a few walls that remained after the club burned down and the old swimming pool, it is neat to walk where such legends in both aviation and in the space program spent much of their time hanging out.  (Note: Not my photograph as we didn't know if the area was restricted and didn't want to get in trouble).
I have really been liking Doctor Aviation and I think this course would be of great interest to anyone who has interest in the aviation world, whether they dream of joining the service to be the next "Top Gun", fly a commercial airliner or even just get their private pilots license to those who just love airplanes and are curious how they work. It's also a great option for a student looking to get a half credit on their transcript.  It's interesting, educational and will be a favorite with anyone who loves the idea of flying. 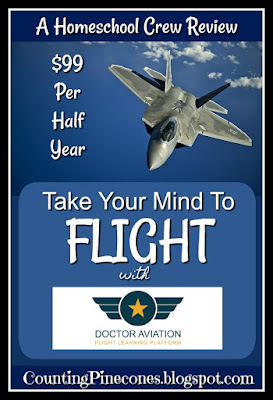 For more information about the six month Doctor Aviation course and how it can be used in your homeschooling, visit their website at DoctorAviation.com.  You can also visit them at the following social media sites:

Be sure to check out the other reviews from the crew about  Doctor Aviation by clicking the banner below.

Posted by Brenda Prince at 4:44 PM