Another great day to kick off our first week of school. Really am proud of the kids for how hard they are working.  Last year we really didn't adhere to a structured schedule and kinda did our own thing but I didn't feel that was accomplishing as much as we could, so we switched to an actual schedule and order in which to work. We start with our daily drills and copy work, followed by our reading lesson. Then we move on to Math, Science and if we're working on History (like today) then we end with that. Throughout the year, I'm going to be throwing in other stuff like crafts and music.. Ashleigh will hopefully be learning the recorder this year and Garrett has elected to begin learning the bagpipes. We have the recorder already but have been researching the Practice Chanter to start him on the pipes. Luckily both seem to be similar in hand position and technique so hopefully they can learn together.  But needless to say, I will be stocking up on Excedrin Migraine soon.

I wasn't too sure how today was going to go, as when I told the kids it was time for school, Garrett told me no, he wanted to play Little Big Planet. Garrett has recently discovered video games and wants to spend his time playing either LBP or Flow (we're hoping to start him on Minecraft soon).  I told him no, we would do school first and then he could play little big planet. Imagine my surprise when he said "Okay" and we sat down for our lessons. Each kids has their own notebook to keep their work organized by subject so we pulled them out and got started.

The kids have so far really enjoyed our morning drills. Our drills consist of writing our name, the date, checking the weather and then a few exercises in both math and literacy. We're currently using August First Grade Morning Work by Emily Ames. The August unit is currently a freebie on Teachers Pay Teachers but I liked it so much that I have already purchased the September unit and will continue to purchase each months unit. I highly recommend it for a morning drill.

Following our drill, we did the one thing the kids don't like - COPYWORK!!  We're starting off with Mother Goose rhymes because they are easy to read and have an area to color with each page. Right now, the kids writing is, in all honestly, atrocious. But they are working on it.. LOL

Following our reading and math we covered "What Does a Plant Need?". I'm really disappointed in the science book that I picked out as I find it way to simplistic for the kids (and because of this, we will cover the entire first book in 7 weeks). We discussed the fact plants need air, water, light from the sun and a place to grow. We then extended the discussion beyond the book and discussed how plants collect sunlight 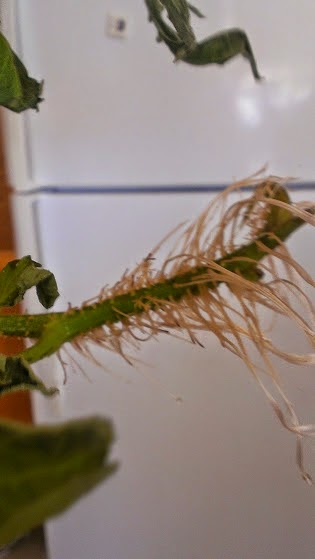 through their leaves and they take in water and nutrients from their roots. We were very lucky in that a few days ago, one of the branches on my tomato plant had broken off and I had began the process of making a new plant from it.  I had a nice, freshly rooted plant in water ready to go. The kids had fun touching the roots and observing them.

We finished the day by working on The Story of the World Volume 1. We had started working on this book towards the end of last year but did not get but a few chapters into it before summer and we didn't work with it at all over the break. I decided to just restart from the beginning, using what we know as a review and to re introduce them to the things that we didn't quite pick up the first time around. We will be doing SOTW twice a week on Tuesdays and Thursday. Today's discussion was about how we learn about history and about archeologists.  Garrett was about at the end of his attention span and was wanting Little Big Planet again. So the first part of our reading didn't go so well. I knew I was losing him quickly so we made it a bit more fun. As the Archeologist was finding each relic (the buildings, the iron knife, the pottery shards and the toy ox and car) I got the kids to act as if they were digging, sweeping away the dirt and then observing each item.  This lil bit of fun really helped to reign Garrett back into what we were working on and to participate in the discussion we were having. 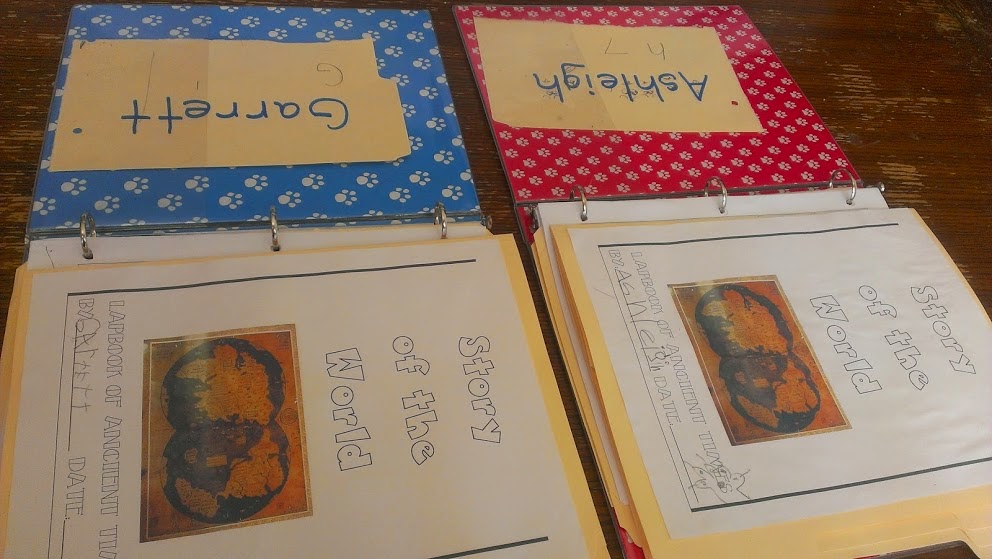 We finished the day by starting on our lapbook for SOTW. We're using the version that was made by Alia Macrina Heise. She use to run the "Run of the Mill Family" blog but for whatever reason, it has been taken down.  However, Carrot Top X 3 does have the entire lapbook that was on the RotMF blog (as well as ones she herself made for Vol 2 and 3).  Unfortunately, the video that explained how to put the lapbook together (5 folders) is no longer available so I had alot of fun figuring out how to finagle it. After watching
this video on youtube a few times and looking at how the book was put together, I finally managed to figure it out last night, just in time for today.   The kids were thrilled to glue the cover sheet and the first activity into their lapbooks for our last activity.

With day two over, Garrett then pronounced it was time for Little Big Planet.. Who am I to argue.. So he was allowed 2 hours of game play after lunchtime (homemade bagel pizzas and milk).. Day two is history!! 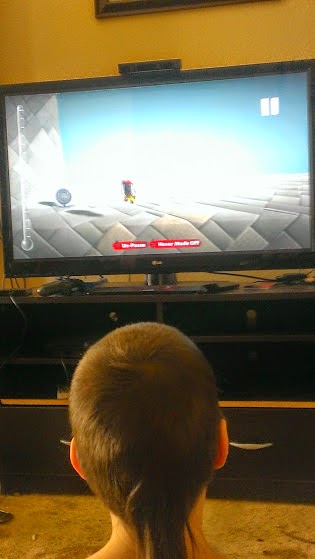 Posted by Brenda Prince at 4:40 PM