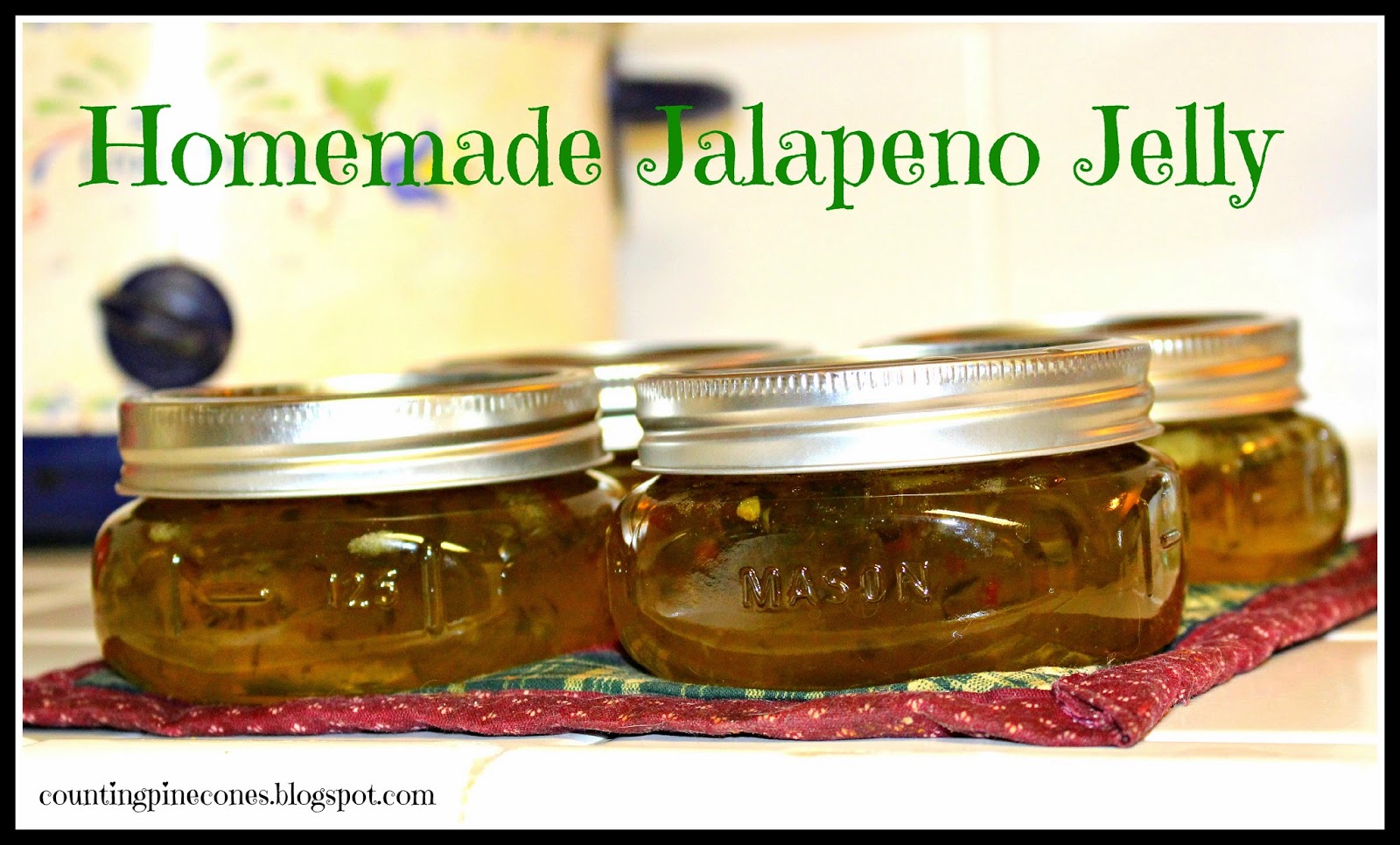 I have never canned before.  It's something I've been wanting to do for a while now - especially when I have to throw out some wonderful organic vegetables that died a miserable death in my fridge because I didn't cook them in time or I had too much.  I prime example of this was the pomegranates we had this winter - I threw out a good 10 lbs of perfect sugar cracked organics because we just couldn't get them fast enough and they got moldy.

Because of this, I set out to start canning. Right now, I'm limited on things that I can can using the water bath method. Hopefully my pressure canner will be here soon so that I can start canning my broths instead of freezing it in ziplocks.. lol

Tonight I attempted making my own jalapeno jelly.  And YUM!  So glad I did.  Husband was very hesitant about this - the idea of jalapeno and jelly together just doesn't seem right to him. (He did try it and said it tasted great).  But for my first canning attempt, I wanted something fairly easy to mix up, jar and seal..
..
Here's the recipe I used
First things first. I drained all the liquid out from the jalapenos and dumped them into my blender along with 1 cup of the vinegar and send them for a spin on the puree setting..

While I was doing this, I realized that I only have 1 big pot and I was needing to give a hot bath to my canning jars.. so while I was doing all this, I was boiling water in a larger sauce pot and dumping it into my crock pot.. Hey, it worked  LOL

Once I had my jalapenos pureed nicely (at least the way I wanted ) I poured it all into my big soup pot along with the second cup of vinegar and the 6 cups of sugar..  Which makes a green slury that looks alot like this:

I brought this to a rolling boil (but not too high heat, as it will try to boil over VERY quickly if you don't control the heat, as I quickly learned). I let it boil for 10 minutes and then I added the pectin, stirred it in really well and allowed it to boil for an addition minute. After the minute, I removed it from the heat.

Now the fun part.. Putting everything in its cute jars.. The recipe said that it made five 8oz half pint jars of jelly. HA. I only had 4 8 oz jars so I planned on pouring the excess into a 16oz pint size jar. I ended up having enough extra to fill 2 16 oz jars, go figure.  I ended up canning one and putting the second one in the fridge for us to enjoy now.

After carefully pouring my concoction into the jars (taking care to leave the 1/4 inch recommended headspace, wiping the rims clean and putting on the caps and rings, my jars were ready to go into their hot bath.. I had to wait for my water to come to a boil, as my huge pot had to be cleaned :(  But once the water was boiling, I added my jars and babysat them..


The recipe said I needed to have them in the boiling water for 10 minutes, however, with the fact that I am at a higher altitude of 2300 feet, I had to add 5 minutes to the time.  After 15 minutes, they were ready to come out.

All night I've been hearing them popping and "singing" and the centers of the caps are sunk in nicely so I'm thinking my first canning was a success.. We will be enjoying the final jar over the next week or so. Husband has already told me I'm making fruit jelly next.. LOL

Posted by Brenda Prince at 1:59 AM