Life's Trials That Made me Better (52 Lists) 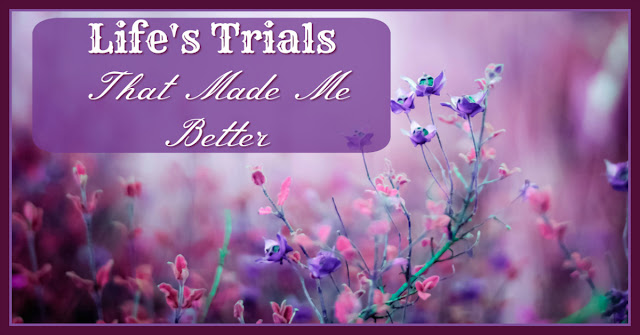 Some time back, Tasha at ABCs and Sweet Tea directed me to the 52 Lists weekly linkup and we had all intentions of jumping into it at that time but for whatever reason, it just didn't happen for me.  As they say, it's always better to be Late than Never, right??  Btw, if you want to jump in too, click the pic below and find out how you can join :)

Life's Trials that Made me Better


Wow!  I jumped in on a doozie, didn't I??  If there's one thing I've had in my life, it's trials and hardships.  However, I've always said that my life's experiences have made me who I am, both in good and bad ways.  I'm cynical, I'm sarcastic, I'm loud and I'm crass and I can be a bit hard to take but I am also a Strong woman who has overcome so much and who became all those other things in order to survive.

Major Events:
1. A child of a single mother with schitzoaffective disorder who self medicated with drugs and alcohol.
2. Being passed from family member to family member
3. Having a pedophile father (who is now in prison).
4. A step mother who viewed me as "the other woman" rather than a child victim.
5. Being kicked out of my home by my family at 17 because of #3 and #4.
6. Marrying the wrong man at an early age because I was homeless and still in high school.
7. Getting divorced.
8. Remarrying and becoming a blending family.
9.  Being a military family.
10. Homeschooling the kids

WHEW!!!   I'm sure I could write a bunch more but I don't want to make my first list more depressing then it is.. lol

Email ThisBlogThis!Share to TwitterShare to FacebookShare to Pinterest
Labels: 52 lists