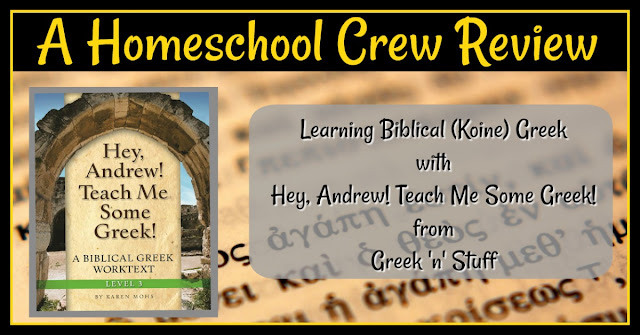 If you've been reading my blog for a while, you'll know the struggle that I have had with finding a foreign language for my kids.  We tried Spanish for a bit, we tried French for a while, and we even tried Chinese.  Once the "newness" of the program wore off, none of these held interest for my kids.  Eventually, we found the right fit with Latin for Ashleigh, but that left Garrett without a language.

When the opportunity to review Hey, Andrew! Teach Me Some Greek! - Level 3 Set from Greek 'n' Stuff was offered , I was slightly hesitant. After all, Greek can be somewhat intimidating with it's entirely different alphabet.  I asked myself plenty of questions before asking for this program - How would Garrett react to learning a completely new alphabet? Would it be too hard for him? Would we sit down for the first lesson and have him balk and have a meltdown?  As the mother of a special needs student, I knew I wanted him to learn a second language but would Greek be asking too much from him for his capabilities.   After a long, thoughtful internal debate, I ended up asking for the review.

And I'll be honest right now.  The moment I filled out the form saying I would like to review this product, I completely second guessed myself on the decision.  It's very rare that I actually do this - typically I have a decent idea if something can work for my kids.  I had very mixed feelings when I was informed I would be on this review - part of me was very excited to try it with Garrett but the other part of me was very anxious, thinking I might have gotten over my head and it would be too much for Garrett.   My fears were especially compounded when I pulled out my own book about the Greek language (that I honestly hadn't picked up since I purchased it)..  To say "it was all Greek to me" would be an understatement.  Granted, I had looked at the sample pages but I'm sure we all have those moments were we second guess things.   BTW - There's a Greek Placement test available on the website to help you select the correct starting level for your student, in case your like me and second guess every decision you make.. For our review, we opted for Level 3 based on Garrett's age and Grade.  I should also mention, prior to this review, Garrett had no previous introduction to Greek or Latin. 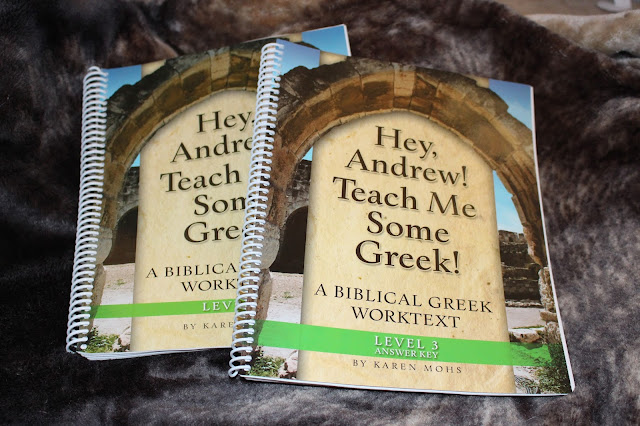 When the materials arrived, Garrett and I opened the box together and inside we found the three components that made up the set.  First was the spiral bound Biblical Greek Workbook.  This workbook is the textbook for the student and contains all the lessons, reviews, glossaries, and also the flash card templates that the students need to work though the curriculum. Second, there was a second spiral bound Level 3 Full Text Answer Key.  This book contains all the answers to each lesson found in the student book, as well as a schedule of lessons, teacher's tips and an appendix of very useful information about the Greek language.  Finally, the third component was the Pronunciation CD which contains audio pronunciations of new vocabulary and an Alphabet Song to help with memorization.


The new shiny curriculum was of interest to Garrett. He already knew that this would be "his language" and he was raring to get started.  A positive for sure but I had seen him get excited about other things, only to lose interest very quickly. How would this turn out?

This system teaches Biblical Greek, also known as Koine Greek, and is the language most used by the Greek Orthodox Church. Designed by Karen Mohs, the way the program is broken down is fairly simple. For the first couple of weeks, the students learn the Greek Alphabet. Once they learn the letters and the sound that each one makes, they they begin to translate those letters into pronounceable words.  Activities throughout each lesson help reinforce what they have learned and provide additional practice, while the flash card templates can be cut out and put on index cards to provide additional review material.  Along with the CD, the program provides both written, audio and visual stimulation in which to present the material to the student.

We decided to follow the recommended schedule as listed in the Answer Key.  Following this schedule, this curriculum can be 36 weekly lessons consisting of roughly 4-6 pages out of the student workbook each week.  I found this scheduling recommendation worked well for Garrett and it did not overwhelm him.   The Answer Key does offer recommendations for additional books in order to find more information but I did not find that I needed any of those outside references to use the curriculum with Garrett.

The first two weeks, Garrett and I focused solely on learning the Greek Alphabet, learning three letters each day while reviewing those we had already learned.  I found writing the letters on our white board and allowing him to both identify the name of the letter as well as to tell me the sound that it made worked really well for us.  The three letters a day pace also worked well.  I admit here, Garrett had a bit of trouble with pronunciation of some letters due to his speech delay (for example, he struggled with Beta  and Theta) but consistent reviewing and correction helped to cement the proper annunciation in his head.   After two weeks, it was time to move on to actual words. 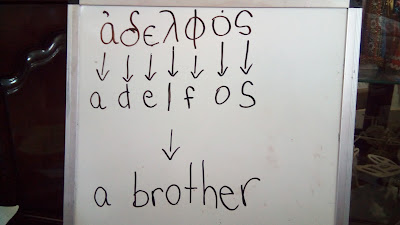 I'm not going to lie.  The first time I wrote Άνθρωπος (the Greek word for A Man) on my white board, I cringed. It was one thing for Garrett to recognized θ as Theta, but he struggles with reading when using the English Alphabet as it is. How would he handle actually deciphering a Greek word?

I wrote it on the board and like a pro, Garrett proved to me that he had indeed learned those letters and their sounds. We broke the word down phonetically (anthropos) and defined it (a man). Garrett did the accompanying activities in his workbook which included writing the word several times and drawing a picture of a man. We made a flashcard for the word to start our deck of review cards and the lesson was over without any tears or meltdowns. 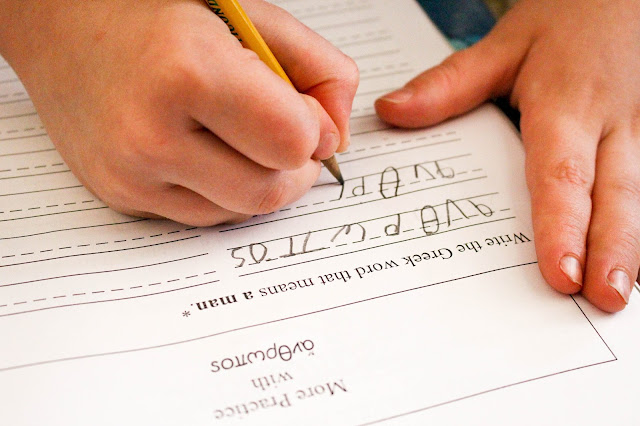 That has basically been how our last few weeks have gone. Tear free, meltdown free, and dare I say it, Garrett LIKES Greek. Weeks later, he's still as excited to do his lessons as he was for that first one. He's also very possessive of his Greek lessons - he does not want his sister (who has managed to also learn the Greek alphabet from listening in on our lessons) to participate in his lessons, after all, she has Latin and this is HIS Greek. 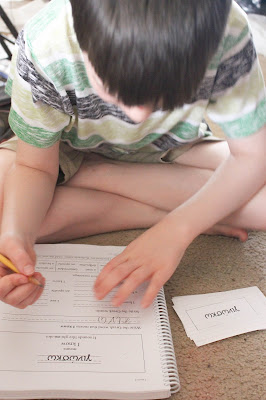 The format of the lessons works well for him, especially when we incorporate the flash cards with his lesson. I spread out the cards in front of him, pronouncing the word for him and ask him to find the correct card that matches. By flipping the cards over to their English meaning, I can work on proper pronunciation of the Greek word with him as well, making them a very handy learning resource at my disposal. I especially like that this resource is part of the workbook and not an extra expense. I simply trim out the words for the week from the back of the workbook, glue them onto index cards and we're set.

I recently got asked by a family member - Why bother teaching the kids Latin and Greek? When will they ever use these languages?  Wouldn't they be better off learning Spanish?  But when you realize that many of the words we use today are derived from Latin and Greek, especially in the fields of science and technology, then one can see the usefulness of learning them. For example, just the one word that I used above, Άνθρωπος , which is pronounced as Anthropos, meaning A Man, is the root for the word Anthropology, which is today's term for the study of man (from a historical aspect). And as Garrett progresses with Greek, then that opens the door for Latin as well.

Greek has worked very well for us and I found that all my nail biting and second guessing was really for naught as Hey, Andrew! Teach Me Some Greek! turned out to be the perfect fit for Garrett. This is also a program that he could stay with for many years to come (there are 8 different levels currently available on the website), allowing us to stay with a format that works for him. 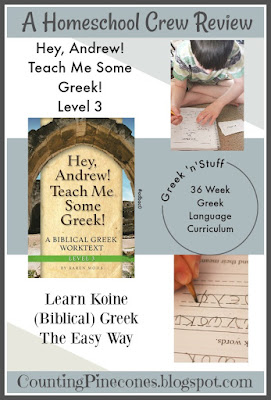 For more information about Greek 'n' Stuff and the Hey, Andrew! Teach Me Some Greek! curriculum, be sure to visit their website (they even offer some free downloadable activities). You can also find more information on the following social media platforms:


While our review for Greek 'n' Stuff focuses on one of their Greek curriculum, members of the Crew were offered more than just Greek.  Be sure to click the banner below and read not only about Level 2 for the Hey, Andrew! Teach Me Some Greek! curriculum but also reviews on Greek 'n' Stuff's Bible study curriculum for the book of Ester, Jonah & Ruth, 1 Samuel and the Book of Acts.