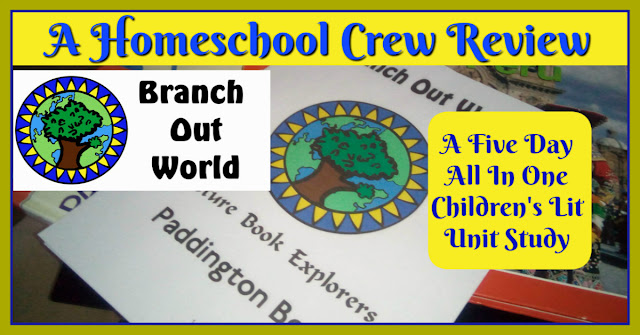 For one full week, the kids and I worked on the Paddington Bear  literary study from Branch Out World.

About Branch Out World 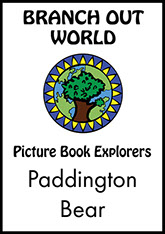 Branch Out World is a business based in West Yorkshire, UK started by a homeschool family who wanted to share their love of great children's literature with other homeschool families by creating unit studies for other parents to share with their children.  While all their studies feature books that have some sort of tie to the UK (written by a UK author, the setting is in the UK, ect), these studies feature selections that any child will love.

About the Paddington Bear Literary Study

For this review, we received a PDF digital version of the Paddington Bear study.  This 69 page study
takes up 4.4MB of space and is suggested for students aged 5-10 years old.  This study uses the picture book Paddington (not to be confused with the chapter book A Bear Called Paddington) written by Michael Bond and illustrated by R.W. Alley. 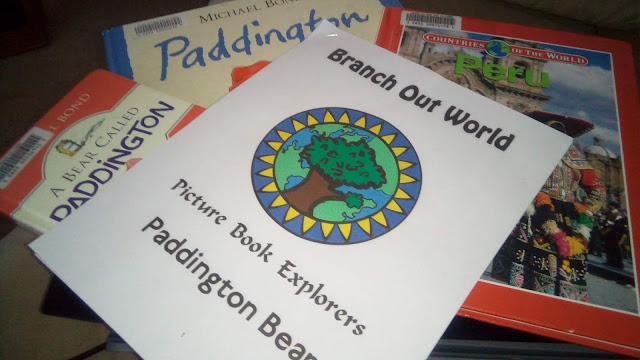 In addition to the picture book, the study also suggests other resources to use during the course of the study.  While our library was limited, we found a really nice book to use to learn about Peru as well as the chapter book that the picture book was based on.

This lit study takes 5 days to complete (although this can easily be expanded to a longer study period by following rabbit holes).  Each day, students read the story and then focus on one aspect of the story:

All maps, print outs and instructions are included with the study, which also includes a lapbooking project.   This particular study contains 30 different activities covering a wide variety of topics.

Day 1 invites students to explore the setting of the book where they learn about England where the story takes place, as well as Peru in South America, where Paddington Bear was from.  I really enjoyed teaching the kids this particular lesson because it covered migration and about what Push and Pull factors were in regards to migration.  This lesson also included both map work as well as a research activity over both England and Peru.  Finally, we learned about when the story was written and discussed other historical events that were happening at the same time. 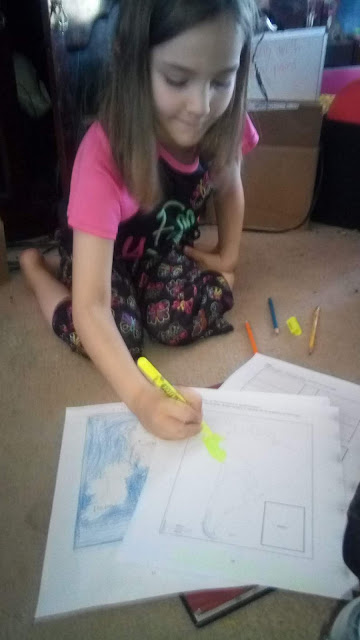 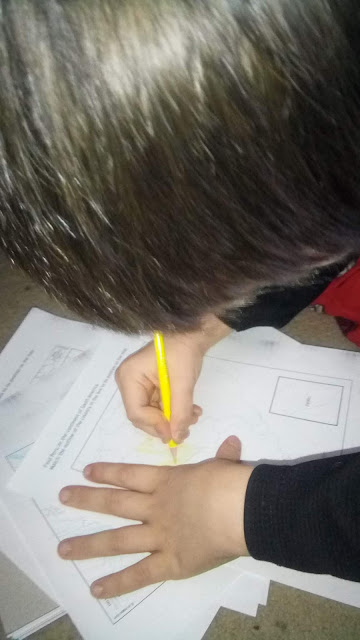 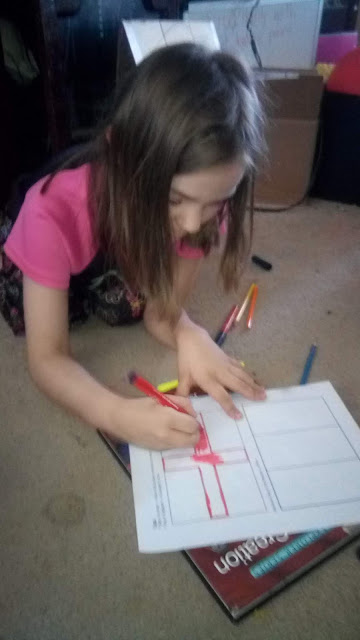 Day 2 has students focusing on vocabulary words used in the story that they might not already be familiar with.  We also learned about the author, Michael Bond.  The kids were really shocked to find out he wrote the book 60 years ago but he died only last year. 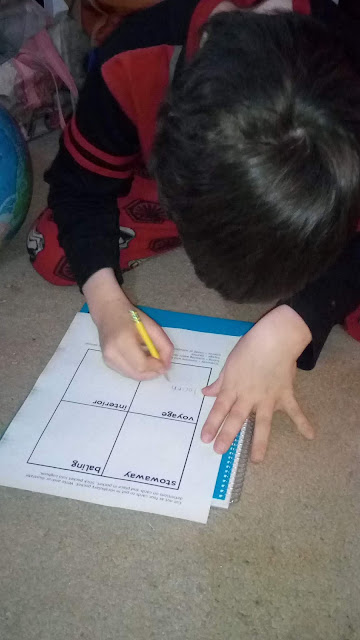 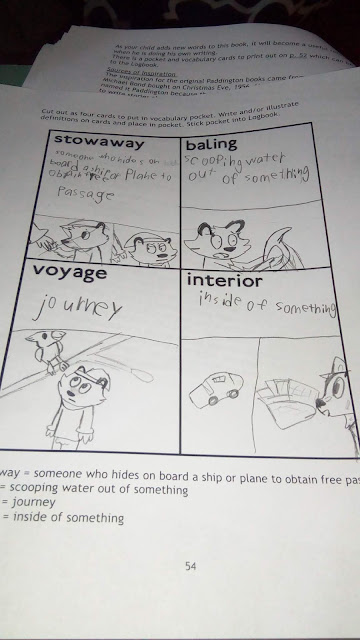 In addition to learning about the author, we also discussed themes covered in this book.  Being an Air Force family, one of the things the kids have learned is "Service Before Self" - so they quickly recognized the theme of "helping others" and they were able to tell me many examples of characters in the book helping others.

Finally, on this day, there was a discussion in regards to how dialect affects the way an author might write a character speaking in their books.  In the book, a taxi driver says "Bears IS extra" instead of "bears are extra".. The kids thought this was hilarious and I have been hearing "bears is extra" ever since.

Day three focused on the illustration aspect of the story.  We learned a bit about illustrator R.W. Alley and then the kids took time to study one of his drawings from the book and then try to remember minute details of the illustration. 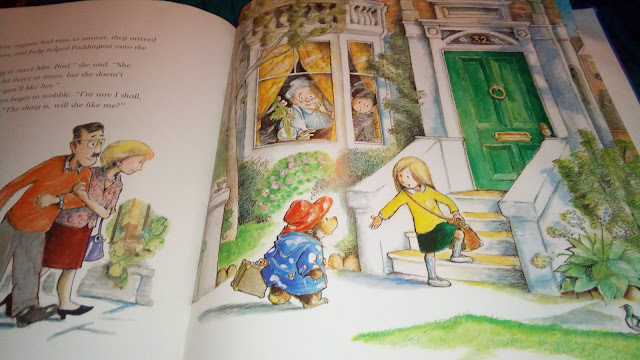 They also learned about Victorian style architecture and some of the details that were used in that style, such as balusters, fenestrations, lancets, and quoins.   The final portion of this days lesson focused on art techniques which Ashleigh enjoyed but Garrett, who hates to draw, decided to sit out for.

By Day Four, the kids were reciting portions of the book to me while I was reading.  This particular lesson focused on science.  Ashleigh really enjoyed learning about the Spectacled (Andean) bear which is the only bear found in Peru. Because the kids knew that Paddington had come from "Darkest Peru", they deduced that Paddington must be a Spectacled bear. Ashleigh, however, was quick to point out that Paddington looked nothing like a Spectacled Bear which brought us down a rabbit hole in regards to artistic license. 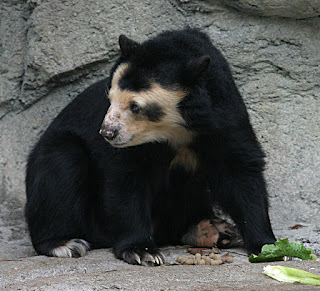 This paricular day had a few experiments, one that discussed the various properties of shaving cream. Two other experiments involved making both an edible and non edible foam.  The edible was a meringue made from eggs and sugar.  The kids have helped to make meringue on a few different occasions when helping make pies so we were going to make the non-edible version, which uses yeast, hydrogen peroxide and food coloring.  However, we were disappointed to find that we were completely out of both yeast and peroxide, so we ended up skipping this experiment as well.   We did, however, have fun writing our names in the condensation on the mirror while learning about steam. 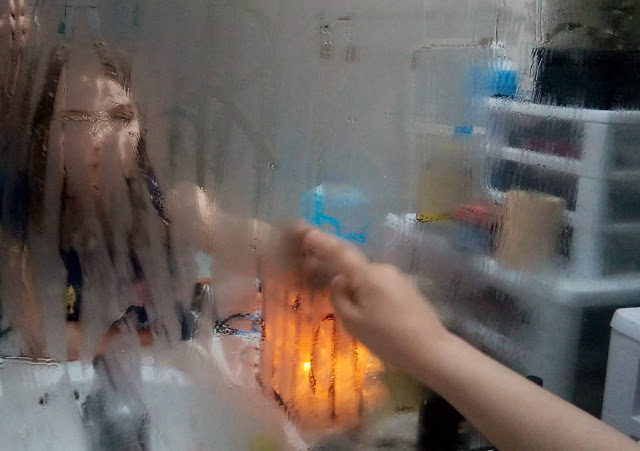 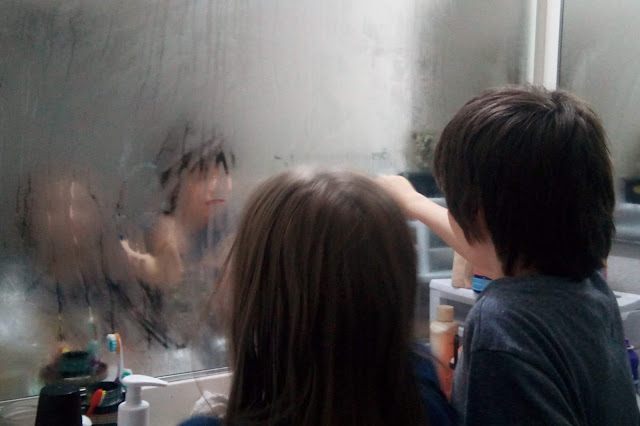 Day 5 focuses on simple math skills, such as drawing parallel and perpendicular lines as well as grouping and numbers.  The kids already know these skills very well, so we did skip those particular activities. Instead we focused on learning more about Tablas de Sarhua.  This turned out to be a really cool rabbit hole for the kids.  We found several videos and photographs and learned a lot about the history of these painted boards. 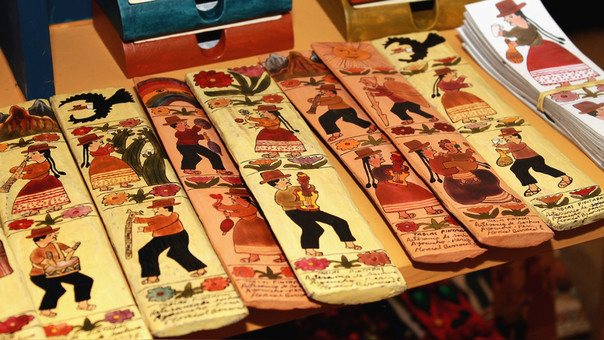 Each day, the kids worked on various activities, whether it was mapwork and coloring flags or putting components into their lapbook. 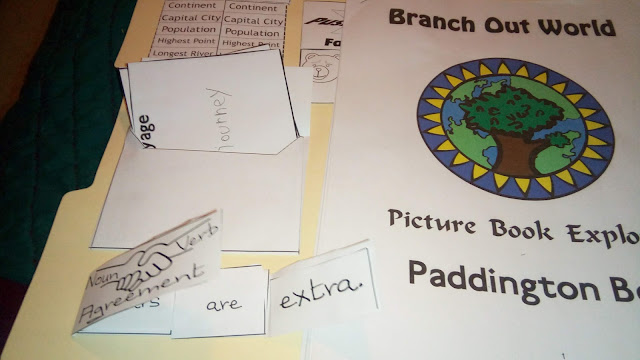 Overall, this was a really neat little unit study that introduced the children to many things that they hadn't been exposed to before, such as the architecture  elements and the Tablas de Sarhua. 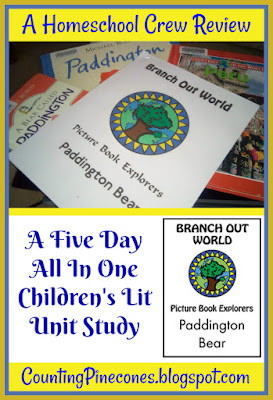