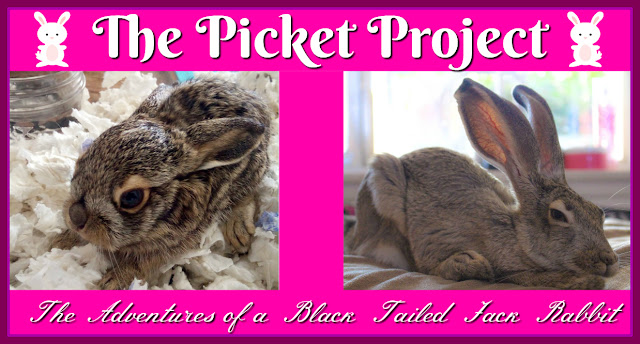 We have a new banner for the Picket Project.  There's not much point to having anything about release  when Picket is perfectly happy where she's at with no desire to go out the door.  So, instead, the Picket Project will instead focus on the adventures of her growing up.

Today is Picket's birthday, btw.  Well, not her annual birthday, but her monthly birthday. At least, we suspect it is, although it could have been yesterday.  Either way, she is now officially three months old. Tomorrow will be her three month "Gotcha" day, making it three months since I found her in the middle of the road.  To celebrate, I gave her a nice piece of banana which she thoroughly enjoyed. 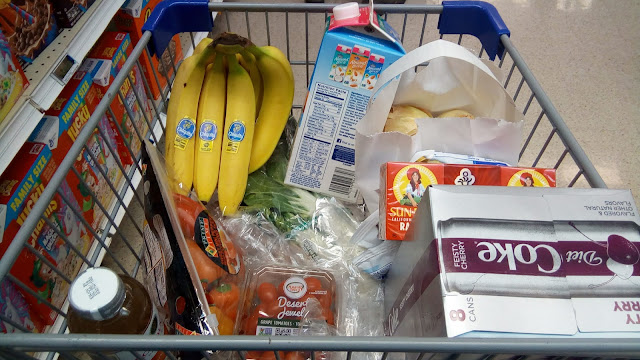 Today was also a shopping day to pick up some staples for her.. This included a box of grape tomatoes (her absolute favorite) a bag of mini peppers, a bunch of bok choy, and bananas (she was given a pice of one and the rest are being made into banana chips for her).   The raisins are for my kombucha that I'm brewing - she can't have them as they are high in sugar but aren't nutritionally dense.  And I needed some diet coke and almond milk, so those aren't for her..  But, this is what a typical bunny food run looks like.. (I had run out of tomatoes yesterday and she made it clear she was NOT happy with that fact!!) I'm sure she was disappointed to see that there also were not any gummy worms in the basket when I got home either.. lol 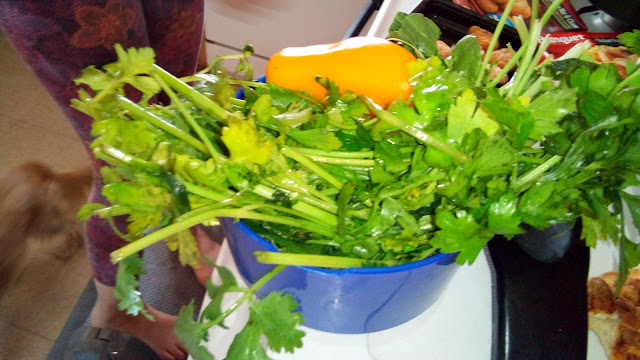 This is what a bunny salad typically looks like.. Lots of cilantro and parsley on top of a mixed bed of romaine and bok choy, sometimes some kale, along with a mini pepper, a couple of grape tomatoes and a small amount of pellets.  The key is to keep foods that are high in sugar or calcium down to a minimum as sugar is unnecessary and calcium can build up in their bladder causing what is known as bladder sludge.    This above is a typically day meal for her to nibble on all evening along with tons of fresh hay.

Excuse my mess, I was sitting on the floor folding laundry and I had to hide my empty coffee cup from the lil turkey because she likes to try to drink my coffee.. Even without coffee in the cup, she will lick the inside of the cup hoping to get some of the residue.  LOL

After the bunny flop comes the bunny 500..  This has been really hard to get a video of as Picket LOVES the camera and will come running to me every time I try to video her.. LOL    Case in point, I tend to get a lot of videos that feature close ups of Picket's nose.. 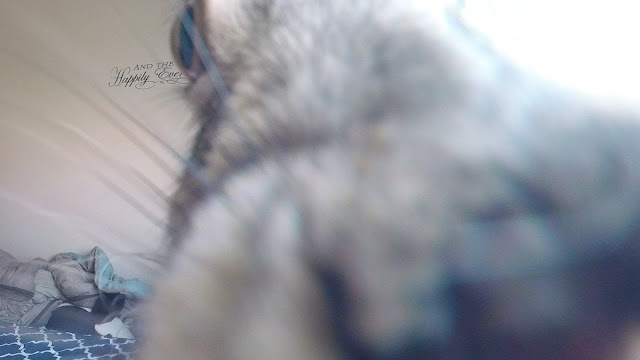 I did, however, manage to get a video of the Bunny 500 using a GoPro.  After watching this video, you'll understand why I had to hide my coffee cup from the bunny!!!  Trust me, she doesn't need any  caffeine.


If you notice on my bed, we keep a table cloth over our bedding (not that it does much good when she starts the 500 laps).. Hopefully we will be able to start working toward potty training Picket to use a litter box, making the need to cover the bed unnecessary.  She has already shown signs of being ready to learn to use the box, so we will be starting that with her in the next week or so.

She has also learned, much like the other animals in this house, that sitting next to mom's bed and looking sweet equates to treats..  I had to laugh when I saw this view next to my bed.. All of them waiting on treats..  I keep bags of pet treats on my bookshelf next to the bed - they all know that's where treats are and that starting at me ends up getting rewarded.  LOL 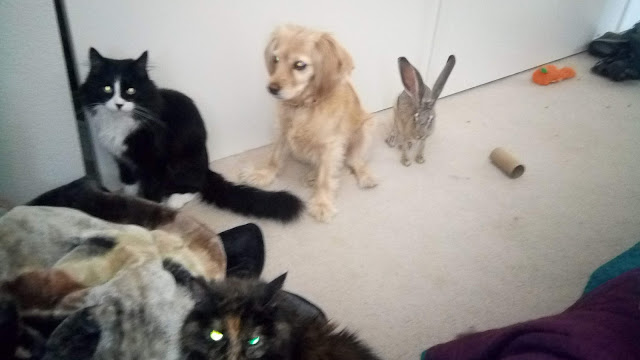 Picket has been given more free reign of the house lately, however, she is very uncomfortable with the tile on the floors in the hallway, so she tends to avoid walking on those if at all possible.. Most of the time, she goes straight from her hutch to my bedroom where there's plenty of carpet and she feels secure..  But she does like to venture to the living room and has made herself at home on the lounge chair. 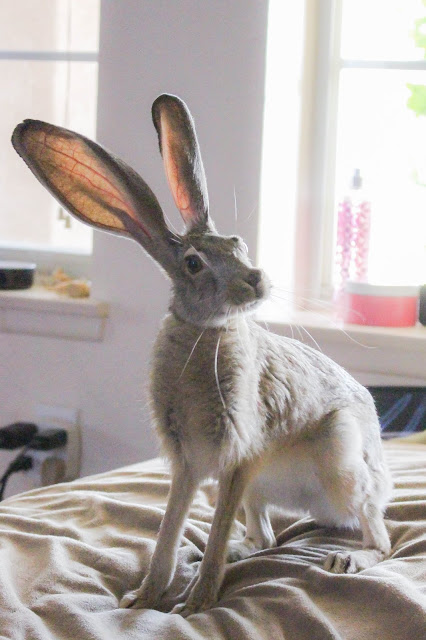 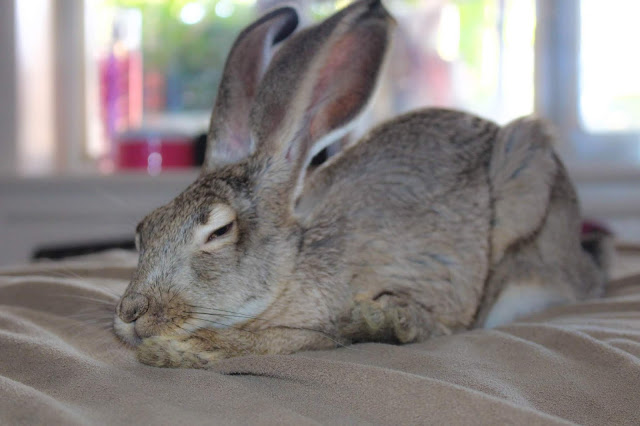 She's also become quite attached to my husband.  If he comes into the bedroom and leaves and shuts the door, both her and Kenny will sit there and start at the door until he comes back. 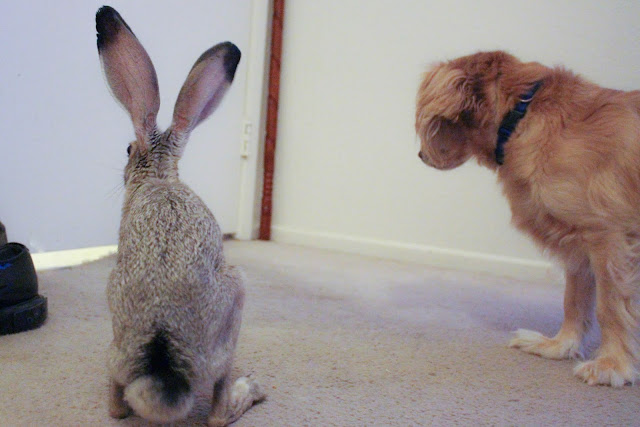 And she's always gotta have her kissed from her daddy when he comes home from work.. 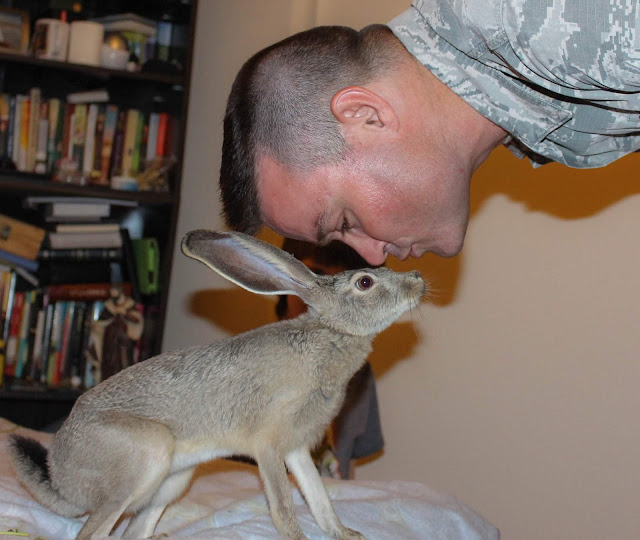 And she will scratch on his back if he doesn't pay attention to her right away. 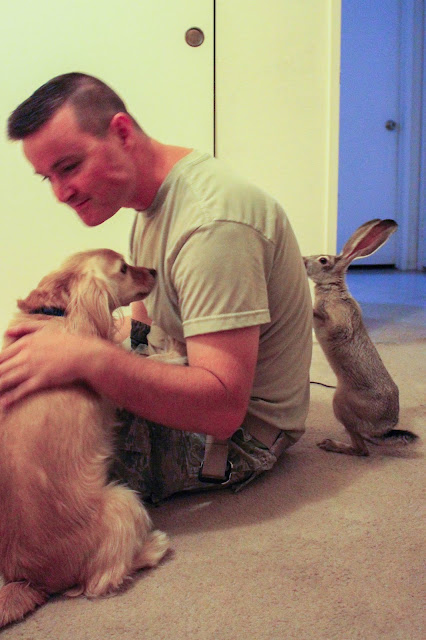 Of course, she always gets what she wants!! 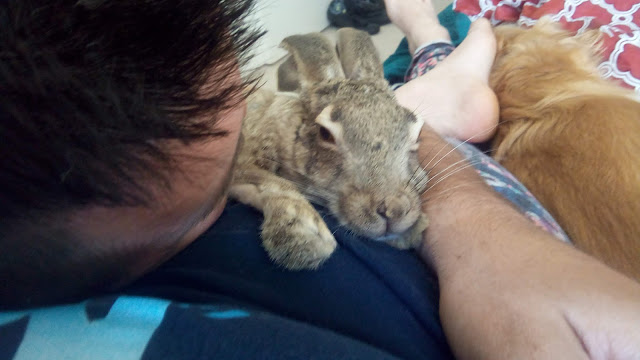 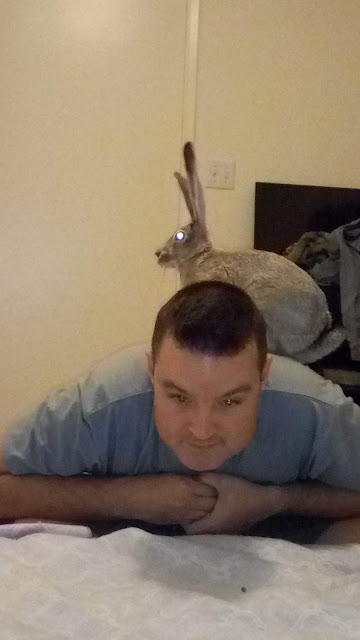 So for this weeks Jack Rabbit lesson, I thought I would show you why Picket is called a black tail jackrabbit.   When observing a black tailed jack rabbit, they tend to keep their tail held upright, against their rump, especially when they feel threatened.  It helps them to blend in with the desert brush.  Fortunately, Picket almost never keeps her tail tight, so it was very hard for me to get a photograph showing it.  Instead, I had to wait til she was asleep and position the tail for a photo. But you can see that the fur looks very coarse and prickly (although it isn't) and would blend in with desert brush very easily.   The fur of this side of the tail is called Agouti, which is pretty much the same as the rest of her body (exception being her belly which is a creamy white color and the tips of her ears which is black). 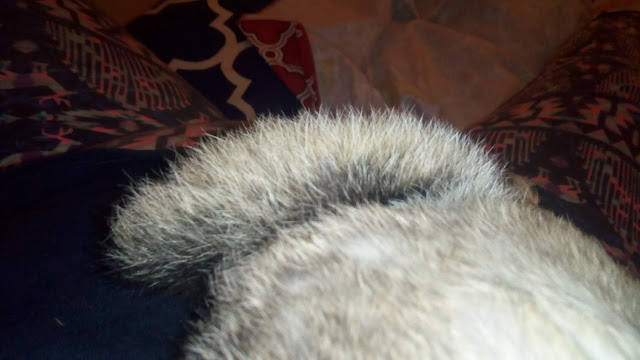 However, the top side (dorsal side) of her tail is a mix of agouti along with a very dark stripe of black. Starting at the tip of the tail, this strip of black goes up to the start of her rump and then abruptly ends.  Outside of her ear tips, this is the only black on her. 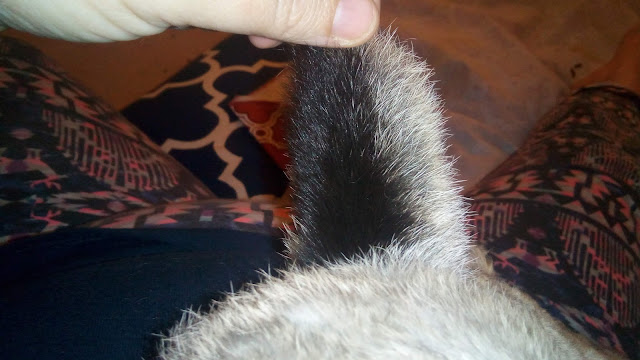 Here's a photo that shows not only the black tips of her ears but also the abrupt end of the black strip at her rump. 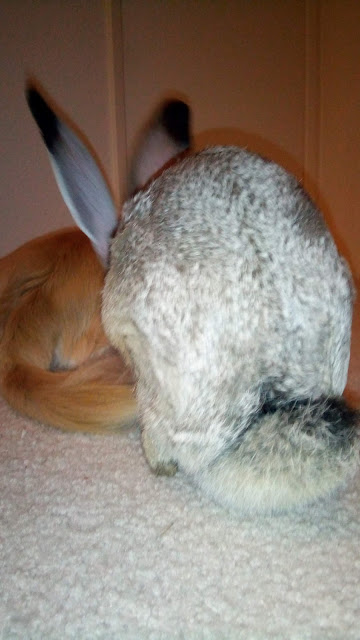 And that is why they are called black tailed jack rabbits.  There is also a white tailed jack here in the United States that has, as you can imagine, a white tail.  They are much bigger in size then Picket will get (and not nearly as cute lol)

Adult white tails weigh between 5-10lbs where Picket will end up weighing in somewhere between 3-6lbs.  White tailed Jackrabbits are also get a bit longer, being close to 30 inch from nose to rump where Picket will only be around 24 inches.

Well, there is the latest update on our favorite bunny girlie.  I should end this now because she has shown great patience in waiting while I write this, however, she keeps letting me know that I need to put the computer down so she can lay on my chest for her nap. 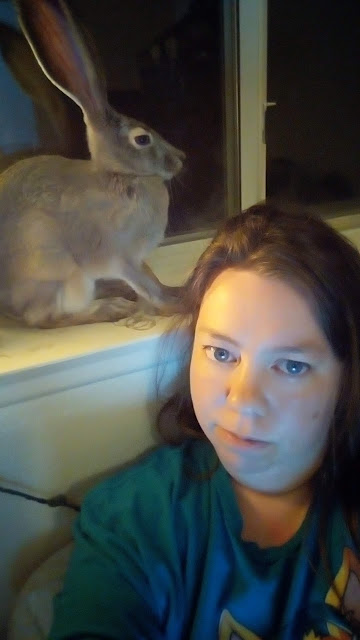