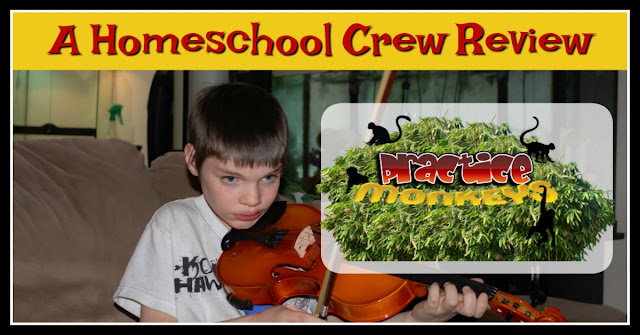 One thing I always regretted as a child was that I never learned to play the flute.  There was a time in my life that I wanted to learn but was not allowed to because even a used flute was fairly expensive.  However, I have always believed that learning to play an instrument, any instrument, is beneficial.  Because of this, I was pretty excited to get the opportunity to review Family Subscription to Live Violin Classes from Practice Monkeys.  I thought the opportunity to learn to play the violin might be something my youngest would really enjoy. 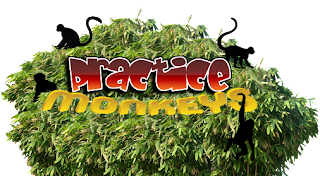 Practice Monkeys is a browser based source for all ages to learn how to play the violin.  Using the 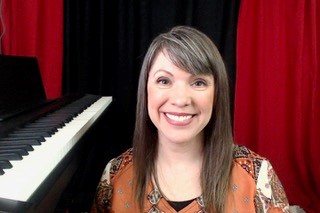 Suzuki method of learning, the classes are taught by 26 year veteran violin teacher Mrs Van Kleeck,. The website offers both Live group classes as well as recorded lessons that help students master their instrument and subscriptions allow students access to both live and recorded classes each week.  The live classes are streamed four times each week in early afternoons while the recorded classes are available from the website 24/7 and can be accessed at the students convenience.

The website is well organized and easy to navigate.  After enrolling and being granted access to the appropriate level lessons for your student, parents will find a treasure trove of information, mostly in the form of very concise videos, from how to tune the instrument before each practice, demonstrations of the skills the student will be working on, how the parents can help the student throughout the process and how often the student will need to work with the instrument.  Along with these videos, the weeks four previously recorded lessons are also accessible as well as PDF downloads for practice sheets and skills checkoff lists for the level your student is working at. 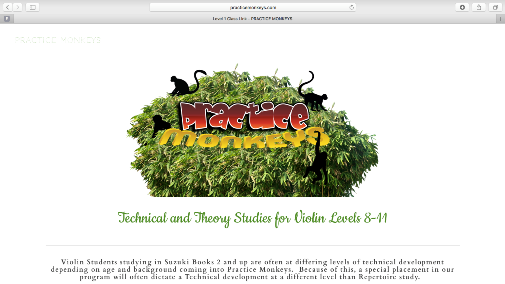 The subscription price is considered a family price and you pay for the instrument level rather than the student.  This means that if you have two students who are both at a Level 3 on the violin, you would only pay for the Level 3 violin lessons and both students could access the classes.  However, if one student is Level 2 and the other is at Level 3, both Levels would have to be purchased.  Also, Assessments for progression to the next level is a separate purchase and would be per student.

Live classes allow your child to interact in real time with Mrs Van Kleeck. By using the computers camera and microphone, Mrs Van Kleeck is able to see and listen to the students during the class time and make suggestions, corrections or praise the student during their class time.

Before showing my interest in this review, I asked my youngest, Ashleigh, if she would be interested in learning to play the violin and she was super excited.  We knew this was going to be a big investment requiring us to either rent or purchase an instrument and accessories in addition to the lessons we would receive so we wanted to make sure Ash was on board.  Her excitement gave us the green light to go ahead and make the necessary purchases and within a few days, we were ready to get started.

We went into this review knowing we weren't going to be using the live classes and instead would have to rely on the recorded classes from the previous week.  Being that we are on the west coast and on a schedule that is dictated by the Air Force, making the live classes weren't possible for us. Instead, we use the four recorded lessons that are updated each week that were recorded from the previous weeks live classes.  For our classes, at level 2, instruction was roughly 15 minutes per class. 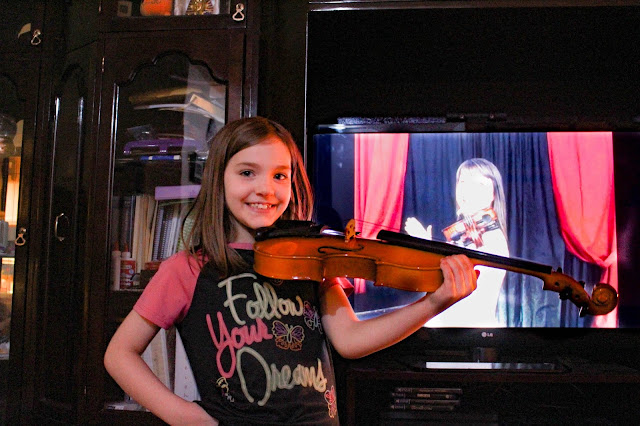 Unfortunately, once the excitement of the new violin wore off, she quickly lost interest and getting her to take the class or practice got to a point where it was like pulling teeth.  Ash being the headstrong child that she is, if she doesn't want to do it, she won't so we hit a wall pretty hard. Gone went my dreams of one day seeing her play in Carnegie Hall.

That's when my son, the son who has never shown interest in anything such as music or arts, my son who doesn't like to watch TV or anything beyond playing Minecraft or playing with his construction set, told me he wanted to try.

I'm going to be honest. I figured he would take a class, get halfway through it and decide it wasn't for him and would say "no thank you" as he always does when we try to get him to try new things.  I figured that the pretty violin sitting in it's case caught his attention and once the "newness" wore off, just like Ashleigh, it would collect dust. He had tried the piano and the guitar and both he quickly lost interest in, but since he asked, I figured I would allow him to try it. 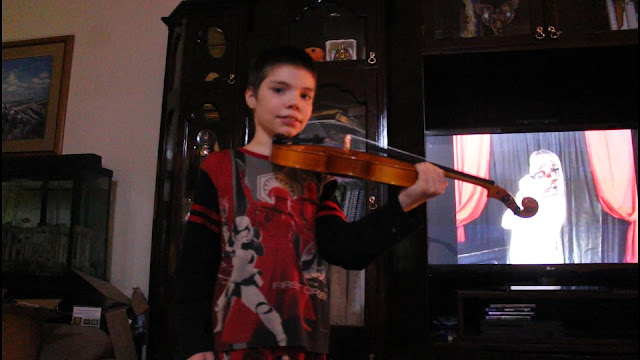 Garrett LOVED it!!! Within a few days, Mrs Van Kleeck had my son singing the pentascale.  First off, my son does NOT sing. My son barely speaks and getting him to hold a conversation with you is a task, but sure enough, my son was doing the hand signals and singing Do-Re-Mi  along with Mrs Van Kleeck.  Within a week, I no longer had to ask Garrett if he wanted to do the lessons each day, he would instead bring my phone and the violin case so that I could make sure the violin was properly tuned so he could practice.  Garrett typically practiced every night, accessing the four classes for each week as well as pulling out his instrument and practicing on his own.   Mrs Van Kleeck is very high energy and I think this had much to do with Garrett's enthusiasm with the classes. He responded very well to that energy and that is a huge factor in getting a special needs/autistic child to do anything new. LOL 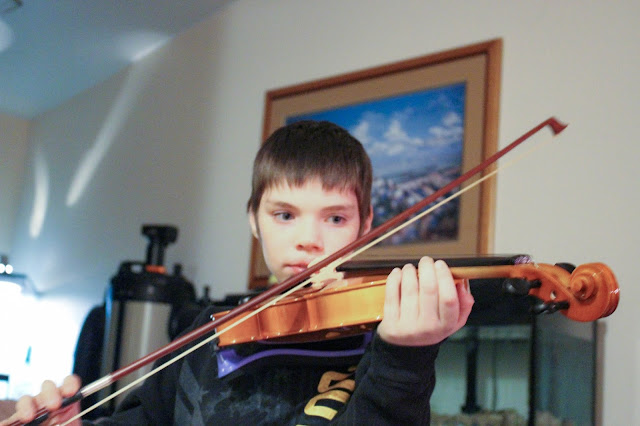 We were placed in a Level 2 class for this review.  In the course of the class, Garrett (and originally Ashleigh) would have to master ten skills in order to advance to the next level class.  These skills consisted of things such as placing the instrument in both rest and ready positions properly, holding the bow properly, sliding fingers to harmonic, crossing the strings while playing the instrument, and playing the pentascale on the instrument. Parents/Students are given a check list that shows each of the ten skills that should be practices to prepare for the final one on one assessment with Ms Van Kleeck as well as sheets to mark off for each day of independent practice. 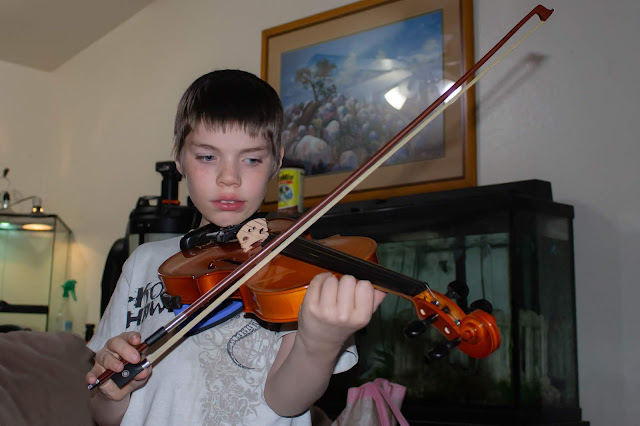 The fact that we didn't attend the live classes was probably to our advantage with Garrett.  Ashleigh probably would have enjoyed the live classes but Garrett doesn't like to talk to others all that much and doesn't like to be put on the spot.  The recorded classes worked perfectly for us as he didn't feel like he was being pressured to interact, we could rewind the video if he needed to see or hear something again and we could pause to allow him to work on what was being taught at his own speed.

We ran into a minor glitch, one that had nothing to do with the class itself but because I had bought a cheap violin with cheap pegs.  The peg for our E String would constantly slip and keeping it in tune even for a few minutes was nearly impossible.   This created a problem for us and held him back a bit in the class and was rather frustrating for him.  Luckily, we discovered a product that helps keep cheap pegs from slipping and once we had that we were again rocking and rolling with the class.

Here's a video of Garrett showing how he has progressed using only the pre-recorded lessons.  Again, we were not able to attend any of the live classes.


I've honestly been taken aback by how much Garrett has enjoyed these classes and he's been upset that our access to the classes is coming to an end.  The only thing we did not take advantage of with our subscription was the inclusion of the student assessment.  We were going to try to get an assessment as I do believe Garrett is ready, however, we lost a family member and with the government shutdown and so our focus shifted temporarily.  However, long before our access ended, I spoke with my husband in regards to possibly paying for 6 months/1 year of classes so that Garrett can continue as we both feel that violin has turned to be a very positive thing for our son.  While we could probably get lessons here on base, my son has responded very well to Mrs Van Kleeck as well as her method of teaching and I can't imagine switching him to someone else.   We'll also be taking Ms Van Kleeck's recommendation as to the purchase of a better quality instrument now that we know it's something Garrett will stick with.  We're looking forward to re-enrolling Garrett with Mrs Van Kleeck hopefully in February. 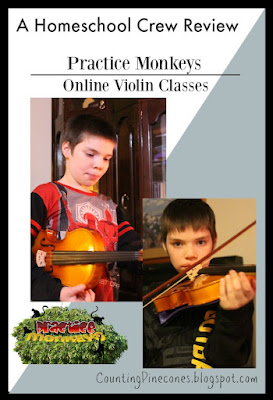 I highly recommend these classes, especially if you have a child that is interested in the violin.  However, Practice Monkeys is also offering Piano classes, also taught my Mrs Van Kleeck.  The website also offers a free class for you and your student to get a feel of how the classes are taught before committing to a subscription.   Also, if you subscribe now (before Feb 1st), you can get a $10 per month discount for the entire time you have classes with Practice Monkeys.  You can find out more information by clicking here ---- http://www.practicemonkeys.com/reviewcrewblogreaders.html

Posted by Brenda Prince at 9:08 PM