30 dollars to Heal a Heart


Three weeks ago, on October 20th, we lost a very important member of our family.  It's taken me these three weeks to be able to blog that sadly, Picket passed away.

It's hard for anyone to understand how losing Picket has affected our family, especially myself and my husband.  We found this completely helpless bundle of fur and somehow, we managed to hand raise her from a few days old to 18 months old.  Her loss affected us deeply, almost like losing a child. I've only seen my husband cry on two other occasions and he cried more in these last three weeks than any other time previous.


We knew that even at the beginning, she only had a 30% chance of survival when we found her - even in the best of care and we were idiots scouring Google as to how to feed her.   We knew that hares do not do well in captivity and most don't make it beyond the first year.  We hoped that we would beat the odds, and while we did make it beyond the year, it still wasn't enough.  Picket will forever be a part of this family and it broke our hearts to say goodbye.  But right up until the end, she lived a spoiled life and well beyond the life she would have had in the wild, being chased by coyotes and bobcats or dodging cars.

My husband asked why did she have to go - were we being punished for something?  I struggled for an answer but I told him that I think we weren't punished, I think we were blessed with a very special experience and whatever purpose Picket was to play in our lives, she fulfilled it and it was time to go.

This week, we did something we never thought we would do.  We drove to a local animal shelter and we adopted two rabbits - rabbits who were living on borrowed time.  We had a rabbit once, it was a horrible creature with a bad temperament who would hide under the table and ambush you as you walked by, biting the back of your feet.  We swore we would never own another rabbit.  However, Picket left a huge hare sized hole in our hearts.

When she first passed, we said we wouldn't get another rabbit - after all, they cannot replace the special creature she was.  After two weeks, my husband said he wanted to being looking at rabbits.. We expected not to adopt  - not to even like any of the ones we looked at but there was a pull to at least look. 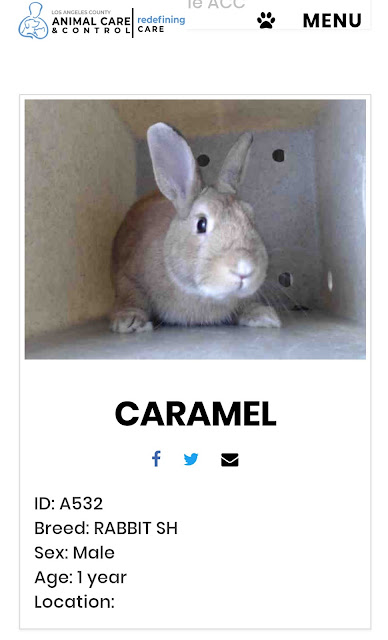 The first time I saw Caramel's picture, I didn't give him a second glance.  Nothing struck me about him.  I don't know if it was Picket or what, but I kept coming back to his picture.  Finally, I told my husband I wanted to go see the rabbit, but again, I expected not to want him but I knew his days at the shelter were limited and he was on borrowed time.  I told the kids it would have to be a very special rabbit for me to adopt him..

I was extremely shocked to find a very tiny little rabbit as the photo made him look like a pretty standard sized rabbit.  Instead, I found a 3lb Mini Rex rabbit in the cage. 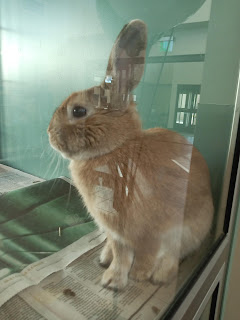 I felt an almost instant connection with him.  We arranged to have a meet and greet with him. We sat on the floor of a cat room and they brought him in.  He was a bit shy at first, but after a few minutes he laid next to me and let me pet him. I told Charles I was pretty sure he was coming home with us to which the lil bunny began to do the "binkies" and I knew it was the right decision. 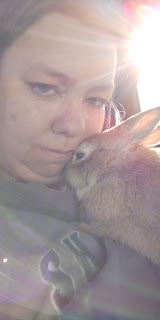 While I waited in the car with him on the way home (he did ride in a carrier while the car was in motion), he allowed me to cuddle with him.  I almost wonder if Picket was whispering in his ear telling him what to do..

Want to know how much a bit of warm furry healing costs?? 15 bucks to save a life.

I decided to keep the name Caramel for him.  It seemed fitting, he is golden brown, he is small, he is sweet.  We brought him home and set up the kennel for him.  We bought a new bedding for it for him on the way home because we couldn't bring it to ourselves to allow him to sleep on the same pad that Picket slept on.  We picked him up a litter box which he used almost immediately.  Then we allowed him to explore the house.


So, Caramel has quickly become my little buddy.  He chases me through the house, hops on he bed with me and just lays beside me to be with me.

I have to watch my feet while I walk because he has a bad habit of running under or circling my feet when I walk.  He loves everyone and everything and is just a general happy go lucky lil dude.
However, even with the addition of Caramel, things just didn't seem like it was complete.  We talked about it and decided we might look for a buddy for Caramel.  Hares are solitary creatures so having a friend for Picket was never a thought, but bunnies tend to do better with a buddy.  As Caramel was already neutered, we decided to being looking for a female doe to bond him with.  We looked at the local shelters websites but the only rabbits available were male.  We had seen a pic of a black rabbit at the same shelter that Caramel was at but it was a male and he was at surgery to be neutered the day we went to see Caramel.  However, when I checked on Wednesday, the black bunny was no longer listed as a male but was listed as a female. (They had her mislisted)..  I had a dental appointment the next day so we decided to go check her out. 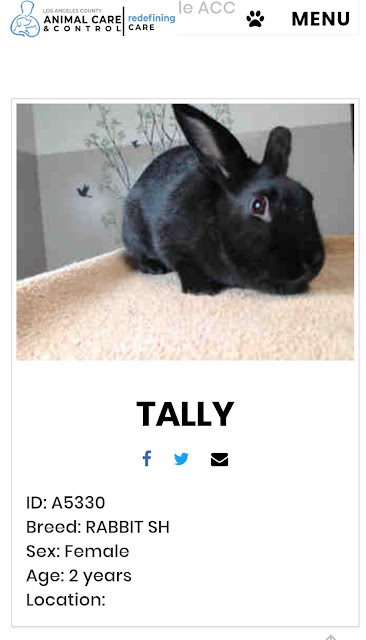 Once again, we drove to the shelter and signed in to look at the rabbit.  She was in the same exact cage that Caramel had been in originally.  And once again, we were not expecting the bunny we saw.   After finding a 3lb rabbit the first time, we found a rabbit twice his size this time. 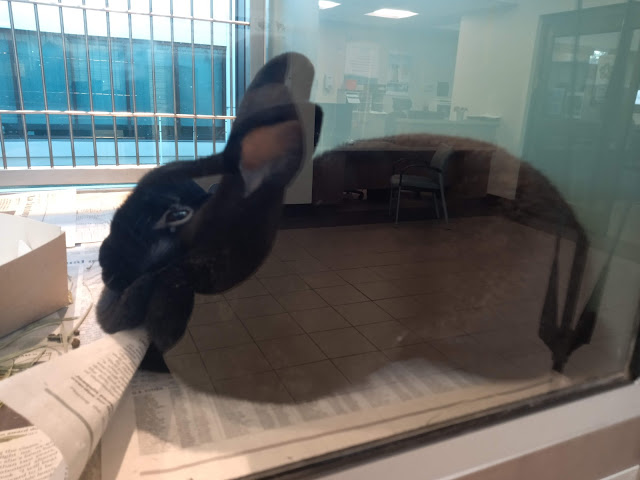 I told Charles since I had the instant bond with Caramel, I thought he should see how he felt about this rabbit.  He walked over to see her in the cage and he came back to where I was and all he said was "She's beautiful. and her face reminds me of Picket".. I admit, I knew we were coming home with that rabbit but we still set up for a meet and greet to visit with her to know for sure.

I wish I had taken pictures of the meet and greet.  My husband sat on the floor, they put her on the floor and she instantly went over to him and laid down next to him and for the next ten minutes, she stayed beside him and let him love all over her.

Another 15 dollars, two lives rescued and we had another bunny.     The name given to her was Talley.. Originally it was Talbot as they thought she was a buck.  Tally just didn't fit her and considering we had Caramel, we figured two candy names would work well.  So, she was renamed Licorice.  She's an extremely calm, laid back girl.  We have determined that she is a Silver Fox rabbit. Her card says she was a stray and we wonder if maybe she had been released due to the recent fires in Los Angeles. For the first two days, she's been confided to our bedroom to keep her and Caramel apart.  She had just had surgery and was still recovering, just getting her appetite back and just starting to move around so we wanted her to have as little stress as possible.  She spent a ton of time under my bed, coming out for affection and to eat.

Today, we introduced the two together to give us an idea of how they would do for the bonding process.  We were expecting to have a bit of trouble but instead, they quickly seemed to bond.  They have been following each other around the house, laying together and playing.  It seems as if again, we made the right choice.

I mentioned what possible had been Picket's purpose in our lives.  I think one of her purposes was for us to learn that if we could trust a wild hare enough to share our home and enjoy the love of that creature , that we could learn to love and trust a regular rabbit.  And in that lesson, we rescued two rabbits who were on borrowed time (Caramel probably had a day left - Licorice had maybe three or four)..

They will never be Picket, and she will NEVER be forgotten, but we didn't get them to replace her - after all, it took two bunnies to even begin to heal the hole her death has left in our hearts. 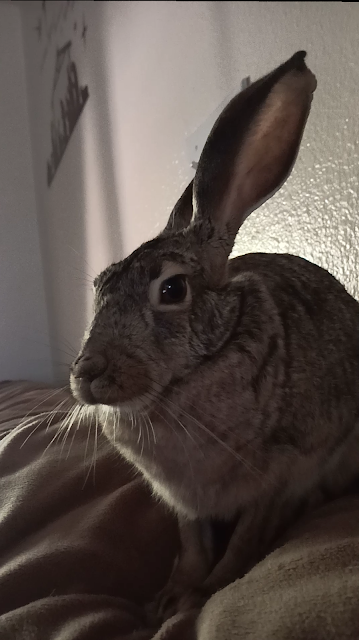 So, while we won't have anymore Picket updates - I hope that you'll be just as happy to have the Adventures of Caramel and Licorice, hopefully for a long long time.


I miss you every day.

Posted by Brenda Prince at 9:28 PM