It's NOT Greek To Me! (A Homeschool Crew Review)

DISCLAIMER:  I received this complimentary product through the Homeschool Review Crew 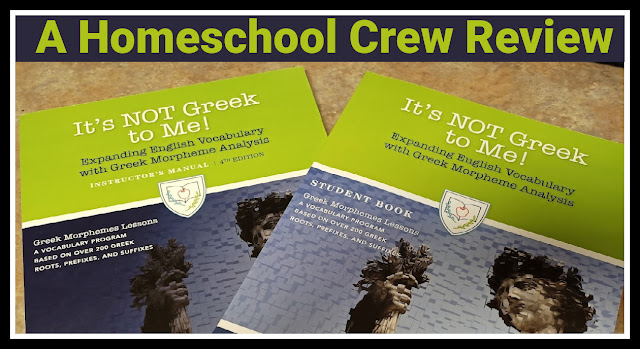 My son really enjoys learning the Greek language. I'm not sure if it's the "funny looking letters" that the language uses or just the way it sounds, but he really has an interest in Greek.  So when I was given the opportunity to review It's NOT Greek to Me! from Ready to Teach, I thought it would be a great opportunity to build on that love for the Greek language by learning how words he learns in Greek can be translated directly to words we use everyday in English.

For this review, we were given a physical copy of the softback, consumable 124-page It's NOT Greek to Me! Student Book, the accompanying soft back, 126-page Instructor's Manual (4th Edition), and a A USB flash drive that contained the self-paced, computer-based PowerPoint instructional lessons for each of the 12 lessons.  Our package also included a handheld hole punch and a metal binder ring to help with making flash cards. 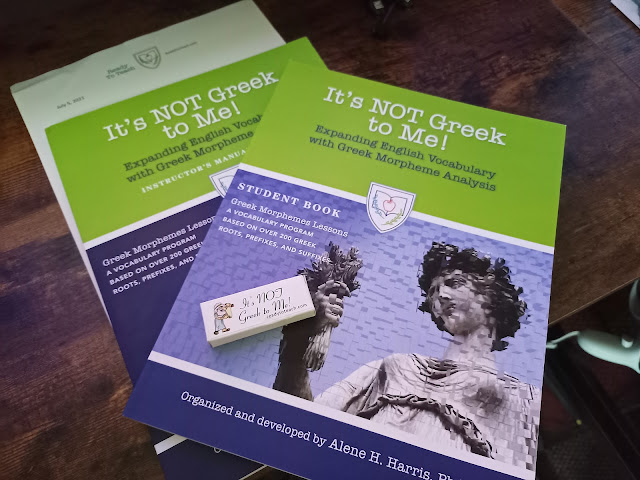 When most people think of a Greek curriculum, they think of the traditional instruction in Koine Greek, where students learn the Greek alphabet and then begin reading and translating works written in Greek. This curriculum isn't a course in the Greek language per say.  Instead, this is a course in Greek morphemes.  Let me explain...

Many of our English words are rooted in Greek. For example, most fields in science derive their names from the Greek language.  Orinthology for example breaks down to the Greek word orinth which means bird with the Greek suffix -ology which means the study of. Together they equate to the scientific study of birds. Scared of spiders?  The Greek word for spider is arachni and the suffix phobia means fear of.  Understanding and breaking down these Greek roots, suffixes and prefixes helps us to understand these longer words that we often encounter in the English language.  This curriculum focuses on exactly that.

By learning Greek morphemes, the student expands their English vocabulary.  The result is being able to break down words such as prognosticate, dyschromatopsia and even arthrocephalochirodactyldermatoglotosteologistophobia. And while that last word is likely something they won't see in their lives (it loosely means a fear of those who examine the body and is a created word for the book), many of these types of words students will encounter in college entrance tests such as the SAT. It will also put them ahead of the game if their educational focus is on the sciences.

It's NOT Greek to Me! breaks learning these morphemes into ten steps.  Over the course of 12 lessons, students follow these ten steps, which help to fully learn and understand the lesson.  These steps are:

1.  Using the lesson found on the included flash drive, during which the student takes notes for the weekly morphemes and their meanings.  Each weekly lesson includes roots, prefixes and suffixes that will be used for building vocabulary. 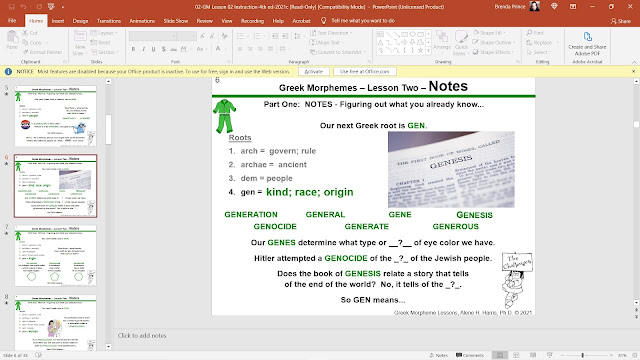 2.  Using the workbook, students complete the work for the first half of a set of provided words.

3.  Check their work, verifying they got the previous steps assignment correct, then complete the world for the 2nd half of the provided words. 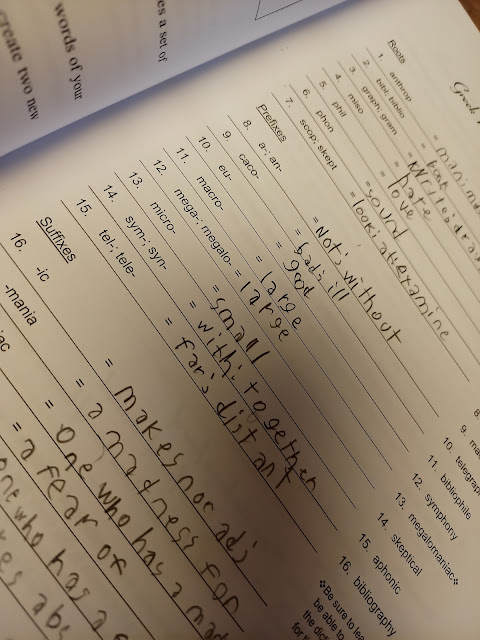 4. Check the work for the 2nd half of the words. Then create context clue sentences with any 6 of the words they choose.

5.  Using both prefixes, roots, and suffixes found in the current lesson as well as previous lessons, the student then creates two new words (not found in the lessons) as well as write a context clue for both words.

6.  To review what they learned, they analyze words created for practice (these are words not actually used in the English language but are created using various prefixes, suffixes and roots together) and match them with "funny definitions" that are also created for practice.

7.  Make a set of study cards for reviewing what they have learned.

8.  Read a portion of a continuous story that uses words using the words they have learned. This story has a chapter after every lesson.

9.  Take a quiz (which is found in the Instructor's Manual) that covers the morphemes for the lesson.

10. Receive feedback on how they did on their quiz.

Garrett has really been enjoying this curriculum.  I think initially, he was a bit disappointed as when I told him it was Greek, he was expecting Koine Greek which he enjoys.  However, I explained to him that while it wasn't the same type of Greek lessons, this curriculum would help him understand the Greek language better as he also learns Koine. 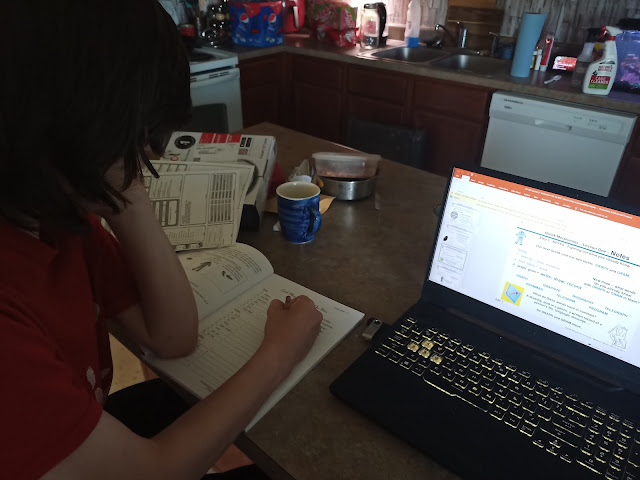 The only real issue I had with the curriculum would be the lessons found on the USB thumb drive.  While this is a great idea, sadly, because of the way that the lessons are protected, the only program that can read the drive is Microsoft Office Powerpoint.  I tried using other powerpoint programs and none could read the drive - including Open Office, which is what I typically use.  I did sign up for the free trial for Microsoft Office so that I could use the lessons on the thumb drive for this review, but once the trial is over, I won't be able to access those lessons.

I also need to mention that we received two thumb drives.  The first one we were sent did not match the workbook that we were using - it was designed for the 3rd Edition of the curriculum and we were using the 4th Edition.  We were able to figure out the pages that we needed for the lessons we were working on and was just going to mention the issue in this review, but Ready to Teach realized the issue and quickly sent out an addition thumb drive that corresponded with the correct edition. 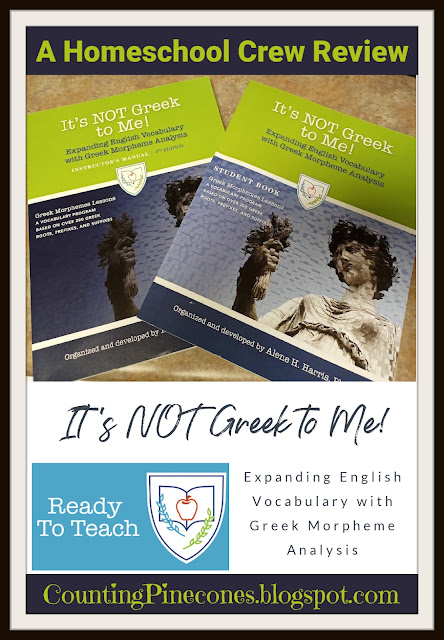 Be sure to click the banner below to read how other members of the Crew used It's NOT Greek to Me! with their families.

Posted by Brenda Prince at 6:26 PM