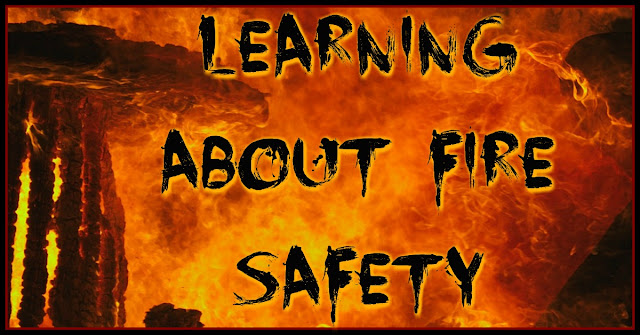 Last week, we worked on fire safety. It's probably a subject I should have covered way before now but since last week was Fire Safety Week, it was a perfect time to cover it. After hours scouring the internet looking for activities, I was able to come up with various handouts thanks to the National Fire Prevention website that could be tied in with our math, reading, writing and science.

To start with, we watched a wonderful video made by one of the fire departments out of Canada that really touched all the subjects concerning fire safety. We then did a tour of the house to map out exits in either direction from the kids bedroom in case a fire blocked one of the exits. We used the "Step" process (Step 1 - Walk don't run, Step 2 - know two exits, Step 3- Get outside and Step 4 - Go to the family meeting place). We had lots of fun practicing crawling to the exits on our hands and knees to get under the smoke and Stop Drop and Roll in case their clothing were to catch fire. We looked for all the fire detectors in our home (we have 4) as well as the CO2 detector and I showed them where we keep our Fire extinguisher and explained why we do not keep it in the kitchen. Then we walked both exit paths to go outside and decide on a safe spot in which all family members would meet at in case of a fire. We decided that crossing the street (we live at the end of  a cul de sac so its relatively safe to cross) to meet at the tree across from the house as the sidewalk has the fire hydrant and we decided that would be a hindrance to the fire trucks who would have to come in. We also looked at video and photos of firefighters in their full safety gear so that they would recognize them and not be scared if they were to see them dressed like that. Throughout the week, we did handouts featuring "Sparky the Fire Dog" that had had activities such as math and writing.

For a science experiment, we talked about how fire needs heat, a fuel source and oxygen in order to burn. We lit a candle and let it burn for a few moments and then took a glass jar and put it over the top and watched the flame die and burn out. I probably should have done this experiment early on, as after all the fire safety talk, Garrett was scared of us having an open flame, even if Mom was there to supervise it. They did enjoy the experiment though and had me relight and relinquish the flame a handful of times.

I think Fire Safety was a success..

This week has been pretty straight forward. Drills, Math, Writing and Science. The kids have seemed to have gotten bored with history and since they are still so young I am not pushing it. We're still working on our addition and subtraction and today we got the game "POP for Addition and Subtraction" in from Amazon to have a bit of fun with for tomorrow.  Next week we should be finishing our Chapter 2 in Math (which seems like we should be further but each chapter has 15 lessons and we've also been covering other more advanced math in addition of the chapter as the kids have picked up simple algebra pretty quickly).  We've also been supplementing our Math with other workbooks such as the Grade 1 Math Star Wars workbook and other things I've gathered from Teachers Pay Teachers and Currclick.

We will finish with Chapter 3 of our Science tomorrow and should be testing on that tomorrow evening.

Kids have also started their independent reading these last few weeks and that has been going really well. Ashleigh is picking it up alot quicker than Garrett who struggles with it but is still doing better than he was a month ago. The words they are being able to read are pretty impressive, however, and I am feeling much better in my decision to not bother with "sight words" and instead work on phonics and sounding out unknown words.
Posted by Brenda Prince at 5:04 PM