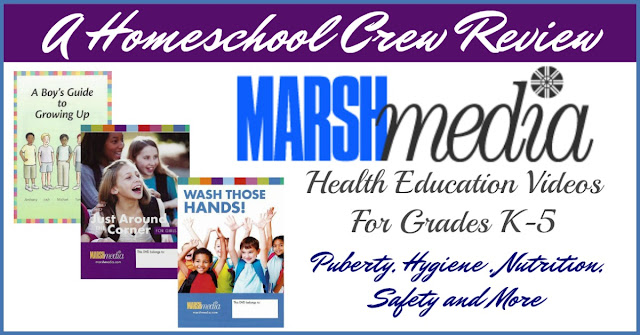 If you're like me, you remember the days that you walked into a classroom and saw the TV stand sitting in the front of the classroom and got excited because you know that meant watching a video instead of doing classwork.  Sure, the videos were cheesy and many times they elicited giggles from behind hands as we watched grainy VHS videos about puberty, sexual reproduction, hygiene, and more.  As corny as those videos were, they served a purpose, providing us with the information we needed to know in a format that wasn't too embarrassing for a classroom setting.

Times have changed and those VHS tapes have given way to higher video quality and internet streaming but the educational value that they provide to students is just as imperative today as it was back when I was in school watching them 30 years ago. Even more so, they can be a very useful tool in a homeschool setting where speaking to their parents about topics like puberty might be a bit more embarrassing then it was for us in a classroom full of students and with a teacher who we didn't have to sit across from at the dinner table.  Thankfully, we were offered a preview of the homeschool special from MarshMedia which allowed for us to view the videos that they offered via streaming on the internet to watch with the kids. 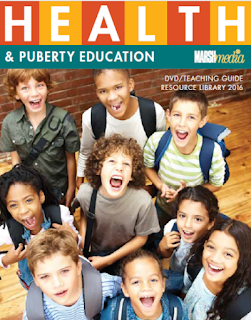 MarshMedia  is a company that was originally founded in 1969 by Joan and Allen Marsh.  Purchased in 2011 by Dan and Brenna Witcher, the purpose of the company has remained the same, to provide health educational videos for students grades Kindergarten thru Grade 8. These videos cover a large array of topics such as hygiene, health, puberty education, safety, immune system disorders, head lice, nutrition, etc.  They also have videos specifically designed for students with special needs as well as thirty one children’s books that are all based on an animal protagonist which discuss character traits such as bullying, teasing, sibling rivalry, etc. Many of these books have also been made as videos which are available as streaming on the MarshMedia website.

Btw, at the end of this review, there's a very special pricing offer from MarshMedia so be sure to read to the end ;)

How We Used Marsh Media and What We Thought

This was a review I really wanted to be on because I have two kids who are both on the verge of puberty.  Granted, this is not completely uncharged waters for me as my oldest daughter is about to be 18 and I've done this before. However, there's a huge difference between girls and boys. I've lived through puberty as a female and can easily explain these changes to my daughters - I have never experienced what it's like for a boy.  How does one go about explaining these things to a child when you haven't experienced them yourself?  Sure, I know the general idea, I worked in the medical field after all and I've also had three kids, so I know the male anatomy but I'll be the first to say, as a parent, the idea of explaining the changes his body is going to go through to Garrett just left me a bit overwhelmed.  It's also not something I wanted to leave entirely to my husband. I love my husband, but I just can't see him handling the discussion appropriately and I honestly think he would be just as embarrassed, if not more so, then I would be. 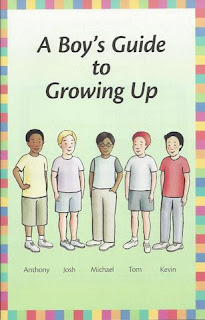 Because of these reasons, I was pretty excited to allow MarshMedia handle the puberty talk for me. Seriously, I just put on a video, Garrett and I sit down and watch it together, he could ask any questions he might have afterwards (or not) but I get the luxury of allowing someone else explain things like erections and nocturnal emissions without worrying that I left anything out.

I ended up watching several of the videos with the kids.  First, Garrett and I watched a video entitled
"A Boy's Guide to Growing Up", which we found under their "Students with Special Needs" section. This video was roughly 15 minutes in length and covered topics such as physical and emotional changes during puberty, health and hygiene, and the need for privacy and safety.

Okay, let's get the embarrassing stuff over with. These are health videos and honestly, not much has changed since we were in school, both in terms of the material covered as well as the basic format of the presentation.  It's inevitable - health videos will have cheesy music and cheesy illustrations of the human anatomy.  I mean, come on, we're not talking Steven Spielberg or James Cameron directing these things with an award winning soundtrack and CGI graphics.  But lets face it, the format works and it serves it's purpose. Yeah, the music and jingles are cheesy but you know what?? My son walked away from that video with the words "Growing up is an important time, you will be just fine" in his head, a much more important message than a Grammy winning pop song any day.

As expected from a puberty video, we were presented with an animation of a young man without any clothes and as the video approached topics such as body hair, changes in muscle mass and yes, growth of the penis and testicles as well as erections, the animation of the boy changed.  Some might take issue with these types of animations and might prefer a technical diagram but I tend to feel that these types of animations are much less intimidating to the younger audience that these videos would be aimed for.  While adults might like the more technical images, I think kids would feel more comfortable with the animated kid that looks more like them. 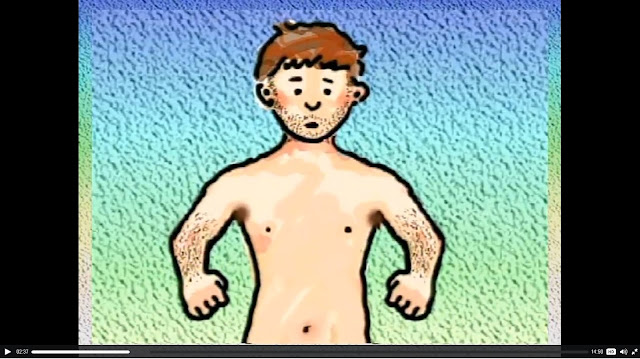 I felt the video did a great job of covering the information that Garrett needed to know without making him (or me) uncomfortable.  It should also be noted, these are not "Sexual Education" videos. They do not cover sexual intercourse or any topics involving things like sexual orientation or gender identification. These are purely "This is your body, you have hormones and this is what is going to happen to your body as those hormones kick in" videos. 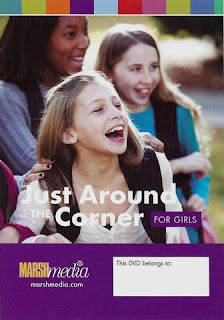 After viewing the video with Garrett, I decided that I would also view one of the puberty videos with Ashleigh. We chose to view "Just Around the Corner - For Girls". This was really just a review for the two of us, as Ashleigh and I have already had the "how your body is going to change soon" talk but I felt it was a good way to review what she already knew, explain what she didn't know in a different way that how I had explained it, as well as cover some topics that I didn't think to talk with her about, such as positive body image.

Where as a majority of the previous video with Garrett was animated, this particular video was more live actors (except with the animation of the body changes which were pretty similar to those of the male puberty video) and showed a wide range of body shapes, ethnicity, ect.  This video covered topics such as hygiene, the maturation of the female sexual reproduction system, physical and emotional changes during puberty,  as well as the need for proper nutrition and adequate sleep.

With puberty out of the way, we've watched a few other videos together and I really enjoyed the variety of topics offered.  From "Go Slow Whoa" - a video that highlights proper nutrition through a game show featuring healthy and unhealthy foods,   "Safety: If You Feel Danger" that helps teach younger student to Stop,  Get Away, and Tell an Adult when confronted with dangerous situations, "Aloha Potter" which is adapted from one of the children's books and uses the story of a colorful Angelfish to teach about bullying, and "Head Lice: An Itchy Problem" which will have you scratching your scalp just from watching it, we found many videos that the kids could watch and enjoy while learning valuable information in the process.

Health topics, especially puberty, is a subject we often times either forget to cover or put off as long as possible due to the sensitive nature of the material.  I'm very grateful that MarshMedia offers videos like these in order to take at least some of the pressure off me as a parent.

Maybe you, as a homeschool parent, would find this resource as valuable as I did.  And you probably clicked the link at the top of this review, went to the website, you looked at the videos and clicked on one and you saw $29.99 to Rent for a 24 Hour Period and thought "That's a bit out of my price range".  Well, keep in mind that MarshMedia supplies videos for the Public School system for use in a classroom setting with multiple students/classes.  However, they offer a Homeschool Special that will give your homeschool classroom full, unlimited access to ALL videos in their streaming library until the end of the year (12/31/17)  for one low price of  $50.  That allows you to view all 59 currently available videos, as many times as you like.  In order to take advantage of this special, go to https://marshmedia.com/pages/homeschool-offer and click on "Homeschool Special".

For more information about MarshMedia and their extensive library of educational health videos, be sure to visit their website.  You can also visit them on the following social media websites:

Posted by Brenda Prince at 8:23 PM