The Adventures of Rush Revere (A Homeschool Crew Review) 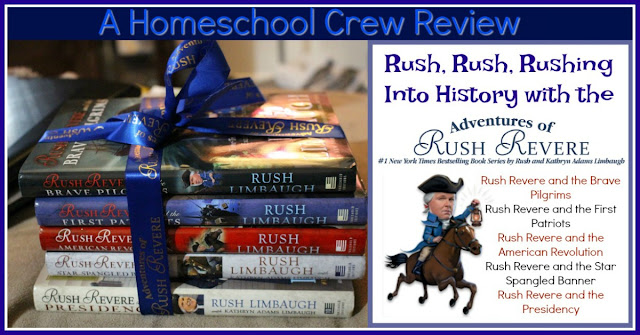 American history is one of those subjects that can be super boring to learn.  Yes, we are all familiar with the many key players in how this country got it's start, such as George Washington, Ben Franklin, and the midnight ride of Paul Revere.  Yet, as amazing as these people were, history for most kids, especially younger kids, is something that doesn't instill excitement or enthusiasm.

But what if you added a talking horse?  Not just a talking horse, but a horse that can travel back in time to take students to observe these pivotal moments in our country's history and interact with those well known historical figures?  And what if this horse has a sense of humor?  Well, then, what you would then have is the five books from the Adventures of Rush Revere Book Series from  Adventures of Rush Revere #1 New York Times Bestselling Book Series by Rush and Kathryn Adams Limbaugh.

For this review, we were given all five hardback copies of the Rush Revere series, tied up neatly with a bow. 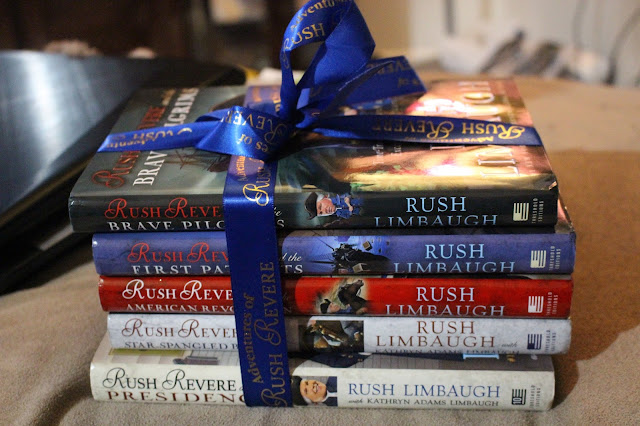 The series currently includes 5 titles. In order, they are:

Rush Revere and the Brave Pilgrims: Rush and Liberty follow the voyage of William Bradford and the pilgrims as they make their way across the Atlantic ocean and journey to the New World. There they experience the hardships that the pilgrims faced on the Mayflower where they have a run in with "Fish Breath", watch the signing of the Mayflower Compact, help with the building of the Plymouth Colony, come face to face with Squanto and participate in the first Thanksgiving.

Rush Revere and the First Patriots:  Rush, Liberty, Freedom, Tommy and Cam travel back to early Boston during the time of Sam Adams and Patrick Henry and the Boston Tea party. While learning about the hardships the early American's faced under the rule of tyrant King George III, they also deal with their own classroom tyrant, Elizabeth, daughter of the Principal, who tries to change history.

Rush Revere and the American Revolution: When Cam's military father is deployed, Cam has to deal with depression and finds himself facing bullying from another boy on base.  To help Cam understand why his father has decided to serve his country even when it means leaving his family, Rush, Liberty, Cam and Freedom head back into history where they meet up with revolutionists Dr. Joseph Warren, John Hancock and the great Paul Revere.

Rush Revere and the Star-Spangled Banner: When Tommy's grandfather falls ill, Rush and Liberty take the students on a trip to the Nation's capitol.  But a field trip isn't just a field trip with Rush and Liberty as they travel back in time to meet up with James Madison and his wife Dolly, Betsy Ross and even Francis Scott Key as they take in first hand the battle of 1814. As they experience adventure and history, Tommy pulls together an exciting keepsake to bring back to share with his grandfather. 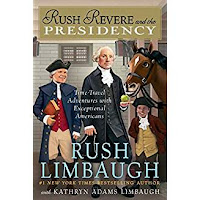 Rush Revere and the Presidency:  Cam has decided to run for student body President, but the duties and responsibilities of the title seem to elude him as all he can see is the popularity boost it can give to him as he hopes to win with empty promises that can't be accomplished.  To help Cam understand what the position would actual mean, they travel back in time to learn firsthand from Presidents such as George Washington, John Adams and Thomas Jefferson and learn about self sacrifice and their desire to serve others.


About the Rush Revere Books

Many people are familiar with Rush Limbaugh, both as a radio talk host and as a conservative political commentator.  Some people like him, others may not agree with him or his political stance.  But regardless of which side of the fence one may stand on, there's no arguing that Rush Limbaugh loves his country and the history of it.  In order to share this with younger children and to help instill a love of American History with them, Rush and his wife Kathryn have written a series of wonderful books that draw children into the story. 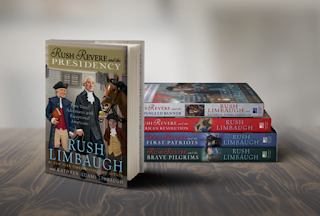 Each story tells of the adventures of Rush Revere, a middle school history teacher who dresses a bit odd and who's sidekick, Liberty, a talking horse, might seem a bit out of sorts for a school setting. But Liberty is no ordinary horse.  After being struck by lightning in his own time during the American Revolution while just minding his own business being a horse out in the field, he entered our time with the ability to talk, to become invisible, and to open a portal of time between now and the past.  Together with Rush, they use these abilities to bring Rush's students to different places in America's past as they observe first hand how important events occurred. Whether it's the voyage of the pilgrims on the Mayflower, the signing of the Declaration of Independence, the historic ride of Paul Revere or the rise of George Washington as our country's first President, the students are given a front and center seat to how our country was founded. 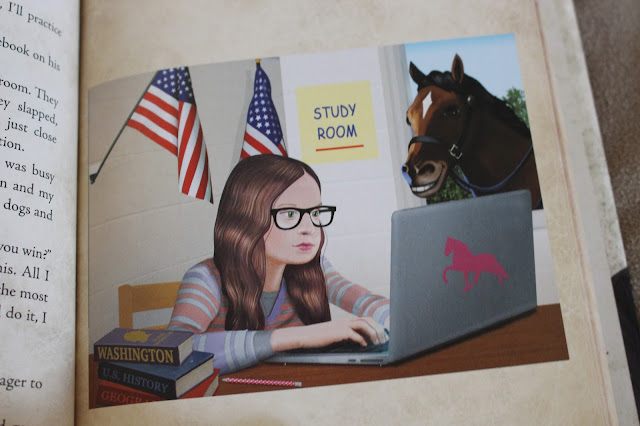 Each book is a library quality hard cover that include full color illustrations as well as photographs of many historic documents and prints of artwork of historical events or figures. In addition to the books, parents can also print out study guides and worksheets that accompany the story as well as fun activities like Trivia and Memory Match games. There's also a link where students can email Liberty (and possibly get a response from their favorite time-traveling horse). 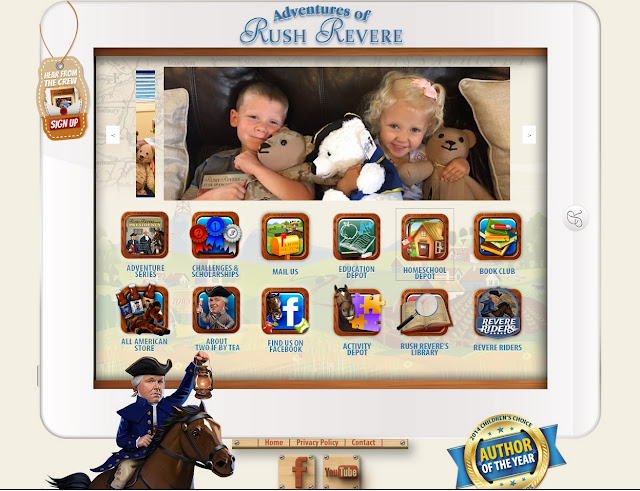 We used these books as a read aloud during our school day.  I have to say, the kids absolutely loved them.  From the very first chapter of Book 1 (Rush Revere and the Brave Pilgrims) and the encounter between Liberty and "Fish Breath", my kids were hooked.  Liberty, without a doubt, is the show stopper in this series (as I'm sure was the plan from the start).  My kids quickly picked up on his humor and wise cracks and looked forward to what was coming next, from trying on wooden shoes (and getting his foot stuck) to doing the moonwalk (which, btw, mom had to demonstrate since Michael Jackson was a bit before their time.. lol) in order to confuse the Redcoats during Paul Revere's boat trip beside the HMS Somerset before his famous ride.  This drew them into the stories, meaning they were listening to the history if, for nothing more, than to get more of Liberty.

The kids took a particular interest in Rush Revere and the American Revolution, since this story really revolved around Cam. Like Ashleigh and Garrett, Cam is a "military brat" who's father is away on a deployment. Cam resides on a military base, just like they do, and so they found themselves relating to him pretty easily.  They also were able to appreciate some of the smaller aspects of this book, such as the gate guards not allowing Liberty on base because the gate guards are a part of life for us.  It's become a running joke for us now, passing through the gate and checking to see if Liberty is outside, chewing bubble gum and blowing bubbles.

I like that in each book, the students face a different obstacle that are things that my children might also face in their lives. Whether it's a sick family member, a deployment for their father (which is always a possibility), being bullied by others in class, or even being a bully themselves, these books not only teach about history but life lessons as to how to handle those types of  situations in a healthy manner.


The kids show off their personal favorite book from the series

When asked what their favorite parts of the Rush Revere series was, this is how they answered:

Ashleigh (age 9) - "LIBERTY!  Because he's a horse and I love talking horses. I also like Freedom who is a beautiful girl who cares about others and wants to be a veterinarian like I do. We both like animals, especially talking horses."

Garrett (age 10) - " I really liked the story of the Mayflower. I really like Liberty too. He talks and he's funny. I liked when he kicked "Fish Breath", that was so funny. "

The books are written for ages 8-12. I did feel that as a read aloud, they worked very well for my kids but that they probably wouldn't enjoy them for independent reading due to the fact the chapters are rather long.  For reading aloud together, they worked very well and I think a ten year old would probably enjoy these for reading alone.  Younger children will definitely enjoy the story as a read aloud and even teenagers and adults could enjoy the story and the history contained in the pages. 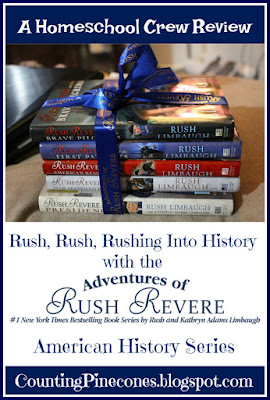 For more information about the Adventures of Rush Revere book series, visit their website or find them on the following social media platforms:

Posted by Brenda Prince at 9:50 PM