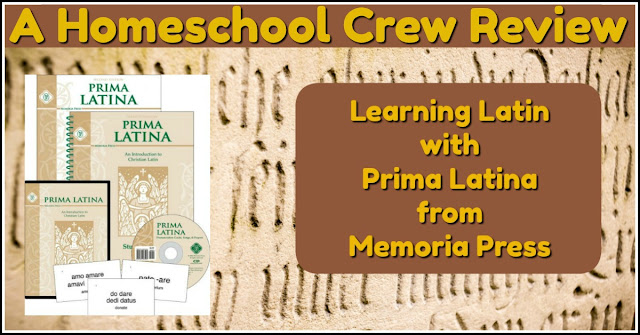 One of the biggest struggles we've had in homeschooling is trying to decide on a foreign language for the kids.  Studies show that the younger a student starts to learn their language of choice, the easier it is for them to learn it. Overall, I believe this to be true because even though I took three years of foreign language (one year of French in Middle School and 2 years of Spanish in High School), my skills are minimal at best.  Because of this, I knew I wanted to start a foreign language as early as possible but the question was, which one.  We tried Spanish but while the kids had fun with it for a brief period of time, it wasn't something either of them really cared about.  We also tried French and Chinese for Ashleigh but again, after a short period of time, she quickly lost interest in both.  We were both getting frustrated

Last year we briefly tried a Latin course and Ashleigh seemed to take a shine to it. However, it wasn't what I would consider a full curriculum for learning a foreign language.  So when we had the opportunity to review the Prima Latina Complete Set  from Memoria Press, I was interested. 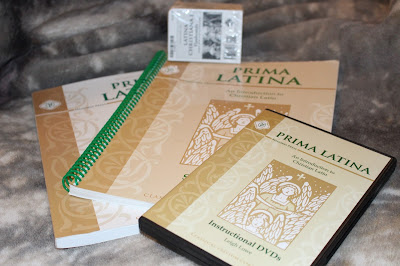 Prima Latina is an all in one Latin Language curriculum for Grades 1-4th and is Memoria Press's introductory Christian Latin curriculum. The complete set includes a 132 page Student book, 151 page Teacher's Manual, a 3 disk DVD set containing over 9 hours of language instructions, a 294 card Latina Christiana I Flashcard set and a audio CD which includes pronunciation of vocabulary words from each lesson.  Made up of 25 individual lessons taught by Leigh Lowe, Prima Latina is designed for younger students who are not yet ready for Latina Christiana.

Each week, the students are taught a new Practical Latin phrase (such as hello, goodbye, ect), a grammar lesson such as about Verbs, Numbers, Pronouns and Adjectives, followed by a set of 5 vocabulary words.  Finally, through the course of the 25 lessons, students learn four prayers in both Latin and English.  By the completion of the course, the student will have learned how to spell and translate 125 Latin words, 25 practical Latin expressions, the numbers 1-10, the names of popular constellations in the sky, and the four prayers. They will also learn many English derivatives from the Latin words they have learned as well as some basic Grammar skills such as learning to identify parts of speech, recognizing verb conjugations, and 1st declension noun endings and conjugation verb endings.

How We Used It and What We Thought

I'm going to start out by being completely honest.  There was a part of me that was extremely hesitant about this review. We had tried a few other Memoria Press curriculum (mostly their literature offerings) and neither of my kids cared for the format. However, with the fact that Ashleigh had already shown interest in learning Latin, I decided to take a chance and I am VERY glad that I did.  Ashleigh LOVES it!

Lessons are designed to be completed within the span of one week.  The way we used it was to watch the video lesson, taught by Leigh Lowe as well as review previous lessons on Monday.  Tuesdays and Wednesdays we would work through the pages in the workbook as well as review the current Practical Latin phrase, vocabulary words and the section of the Latin Prayer for the week. For Thursday and Friday, I would print out worksheets that I made to reinforce what Ashleigh had worked on for the week as well as to help reinforce proper spelling of each word.  We found Leigh Lowe's video instruction to be very upbeat and Ashleigh had no problem sitting through the 15-20 minute lessons.  Her pronunciation of the words are easy to follow and she speaks slowly and clearly. Combined with the good audio quality of both the DVD lessons and the CD's, each component has really helped Ashleigh learn each weeks lessons quickly. 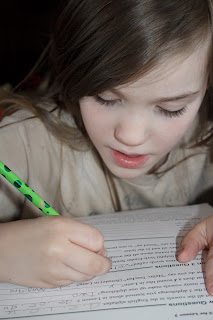 The student workbook is printed in green and black ink, making it easy to read. All the pertinent information given during the DVD lesson is also included in the workbook, making it simple to review as she works her way though the activities in the book.

Activities are fairly simple, including things such as looking at a list of English derivatives and circling the letter combinations that are similar to that of the Latin word they are based off of,  answering review questions that reinforce what was previously learned, translating Latin words to English, and writing out vocabulary words and their meaning.

Each lesson also ends with a "Fun Practice" activity which gives the student something fun to look forward to. 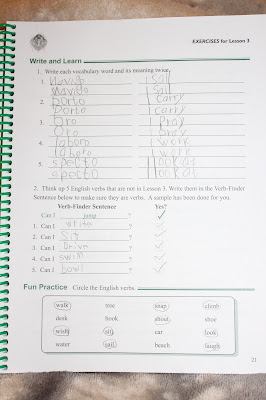 Ashleigh, being 3rd Grade, about to start 4th grade, found the workbook easy to follow and to read on her own. The instructions as to what is expected for each activity is explained clearly for her reading level, which means that Ashleigh needs very little help from me while completing the workbook sections of her lessons, freeing me up to help her brother with lessons he might need help with.

The teacher's manual is basically a copy of the Student workbook but with the answers filled in.  I have enjoyed having the teacher's manual on hand while watching the DVD lessons with Ashleigh as it gives me a place to make notes of proper pronunciation of the vocabulary (being I have never taken Latin outside of for Medical Terminology in college) so that when I work with her, I'm not mispronouncing the words myself. This was an issue that we had with our prior Latin lessons, as I honestly cannot tell you how many of the vocabulary words I was teaching her properly as I was just guessing at the pronunciation.

Being able to write the word as I hear Leigh Lowe pronounce it into my Teacher's Manual allows for me to refer back to it quickly without needing to repeat the lesson or go get the CD (which we tend to keep in our car so that we can review while on trips to town).


Ashleigh (and her rats) recite The Sanctus, the first prayer learned in Prima Latina 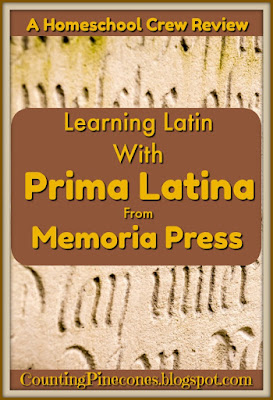 Without a doubt, Ashleigh's favorite part has been learning the Latin prayers.  Currently she is working on The Sanctus. Other prayers she will learn will include The Doxology, The Table Blessing, and finally the Lord's Prayer.  The prayers are learned in small chunks, one or two lines at a time as to now be overwhelming.  There's not a family member (including my ex husband when he came to visit last week) who has not had the "pleasure" of having Ashleigh recite her Latin prayer for them.


Prima Latina has been a wonderful experience for Ashleigh and I think it's a safe guess to say that she has found her foreign language of choice.  Luckily for us, Memoria Press offers several levels of their Latin curriculum, starting with Prima Latina for younger grades and expanding all the way to high school offerings such as 4th Form Latin and beyond.  This means that with Ashleigh starting as early as she has, she can easily continue to learn throughout the rest of her learning to a mastery level, possibly even to the point of taking an AP exam for college credit.  To see their full lineup of Latin Curriculum, be sure to visit this website at https://www.memoriapress.com/curriculum/latin/

Now if I could only find a foreign language Garrett likes!!


You can find more information about Memoria Press and their extensive Latin Curriculum, including Prima Latina by visiting their website. You can also visit them on any of the following social media platforms:
Memoria Press was extremely generous with the Crew, offerings not only Prima Latina but also Latina Christiana as well as First through Fourth Form Latin. Those not interested in learning Latin were also offered two of Memoria Press's Science offerings, The Book of Trees and Nature's Beautiful Order.  Be sure to click the banner below to read all the reviews and see if Memoria Press is right for you.