My Kids Are Not Google 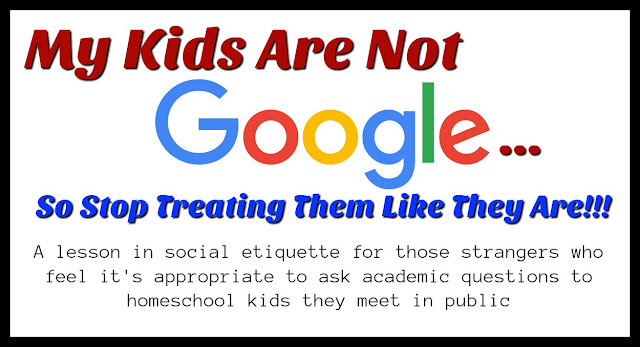 As a homeschooling parent, there is one particular thing I really don't like and that is when someone hears that we homeschool and start drilling my kids with questions like they are on an episode of  Jeopardy.  They almost always ask questions that when put on a the spot that even as an adult, I need to take a moment to think about, yet they expect children to drill off the answer off the top of their heads in milliseconds.

There's two major issues I have with this.  First, my son is on the spectrum. He doesn't talk much to begin with.  Garrett is not the conversationalist that my daughter is and therefore, if he does not know you and feel comfortable with you, he's not going to converse with you.  You, an adult stranger, intimidate him and take him out of his comfort level while he's simply out enjoying family time without having to worry about his studies.  This is his time to take in new sights, new sounds, and to just relax and be Garrett.  So when you ask him to rattle off answer to math problems or ask even simple questions like to name the continents, he's going to shut down, shut you out and respond with a simple "I don't know" as he returns to observing what he was observing before you rudely interrupted him.

My daughter isn't that much better.  Granted, she's happy to have a full conversation with you, so long as it's on her terms and what she wants to talk to you about.  She can tell you what the condition Diprosopus is (which Mom had to look up one day after she told me about it - and I have a medical degree!!).  But if she doesn't feel like answering your questions, she won't, and she shouldn't have to anyway without facing your judgement.

The second is that my kids are not Google.  They are kids. They are not simply robots where you ask them something and they spit out the answer for you.  Why people expect homeschool kids to perform just to prove a point in academics is beyond me.  When I am out in public and I see your child, and maybe your child is wearing a XYZ Elementary School shirt, I don't feel the need to approach your child and ask them random questions for the sole purpose of making your child look like an idiot or to appease my need to prove that my kid is superior to yours. I seriously doubt those who ask Homeschool kids these questions would approach that public school child either.   So why is it that same complete strangers feel it's acceptable to do so to my kids if they hear that they are homeschooled?

All parents homeschool differently, just as all Public schools follow a different schedule. As a military family, I can tell you the horror of my child doing extremely well in one school, only to switch to another school and be far behind because one school follows a different schedule than the other.  Some schools introduce algebra in 6th grade while others do not introduce it until 9th grade.  Some schools teach American history in middle school while others not til high school.  Because of this, if you were to put 10 students from 10 different school systems into one room and ask questions that would be typical for a 8th grade student at one district, many of the other students won't know the answer.  Does this mean that the student from that district is smarter?  No, it just means that material hasn't been covered yet for the other students.

The same holds true for homeschool students.  Each family who homeschools could be considered their own school district.  Each follows their own curriculum and their own pace.  Some teach American History first, thinking it's more important for a child to have a good foundation of their own countries history before moving on to other parts of the world. Others, however, teach ancient history first and work their way through to present time. Neither way is wrong and the end result is both students learn the same material, only at different times.  It doesn't diminish the knowledge of the student or the ability of the teacher any more than if one public school district teaches State history in 3rd grade and another  district in the same state teaches it in 5th.

Whether public school or homeschool, teachers all have the same goal - to give the students an educational foundation by the time they reach 12th grade that will give them the advantage to become a productive member of society as they start their adult lives. Nobody wants their kids to go out into the world without the ability to read, write and do basic mathematics.  So long as that goal is achieved by the time they complete 12 years of school, it doesn't matter the journey it takes to get there, it just matters the final destination.

Yet, when a public school parent (or even a superior homeschool parent - you're not off the hook here) decides to take it upon themselves to "prove" how much more their student knows at the expense of my child, then I take offense.  We teach our children not to be bullies yet many do not realize that this behavior is exactly that, bullying.  They do not realize the harm they do to a child's psyche as they start to wonder if they are stupid because they couldn't answer the questions asked in a split second, while trying to comprehend why a stranger, whom many children have been taught to not speak to in the first place, is trying to engage them in a conversation that bypasses the civil norms of conversation and goes straight into an interrogation phase.

As adults, if someone skipped over the rules of etiquette and went straight into asking questions in order to belittle us, many of us would step away, take offense and some would respond in an aggressive manner.  Children do not have these options as they look towards their parents for hints on how to respond.   There are plenty of videos on youtube that show this type of behavior, where someone is being questioned and they look at the people they are with in order to take cues to how to answer or respond.  We all know that something with the situation is wrong but we are unsure.  Children are no different and your "fun" is unsettling for them, especially special needs children like my son.

So please, stop this behavior.  If a child isn't in school during normal class hours, it's fair to assume that they are homeschooled.  You do not need to ask if that child is homeschooled and then bombard them with question after question as to what they know.  If you feel the need to speak to them one you do realize they are homeschooled, simply say something like "That must be so much fun. I bet you have some pretty neat fieldtrips, huh?" or ask "What is your favorite part of homeschooling?".  But please, leave the multiplication drills and history pop quizzes to the child's classroom time. 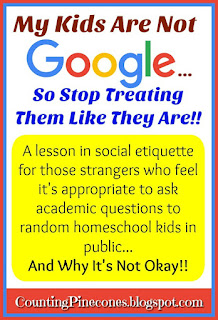 Posted by Brenda Prince at 2:51 PM