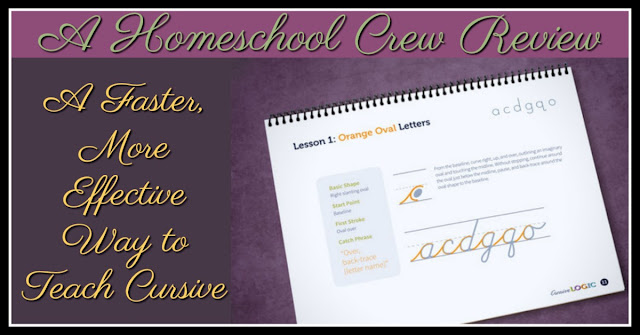 Cursive writing is quickly becoming a lost art form.  In a world where computers and emails are the norm and actually addressing an envelope to write a letter has fallen to the wayside, schools no longer take the time to teach cursive style writing.  However, many homeschool parents still see the importance of teaching this valuable skill and are always on the lookout for an effective way to teach cursive without tears and frustration.

CursiveLogic is an affordable, effective way to teach cursive quickly in short but manageable lessons that even younger students can handle.


For this review, members of the crew were given the Cursive Logic Quick-Start Pack and The Art of Cursive coloring book. 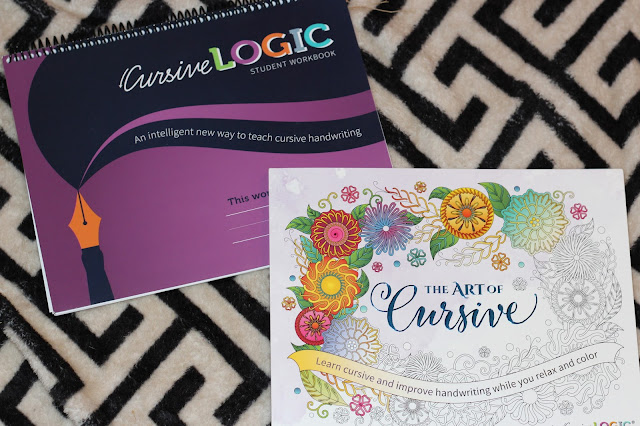 CursiveLogic was founded by Harvard graduate Linda Shrewsbury a homeschool mother, teacher and college professor who developed the CursiveLogic way of teaching cursive in order to meet the needs of one of her adult special education students.

The CursiveLogic method of teaching works on the inherent structure of the cursive alphabet.

* Letters are grouped by shape:  Four basic shapes make up the entire alphabet.  CursiveLogic teaches all these similar letters together in one lesson, greatly simplifying the learning process.  Rather than teaching the letters in alphabetical order, CursiveLogic groups the lowercase alphabet into four groups based on the shape of the initial stroke of the letter.  Letters are also taught in a specific order that helps to reinforce that pattern.  By teaching similar letters together, CursiveLogic captures the natural synergy of the alphabet, allowing each letter in the series to reinforce the proper formation of all the others. 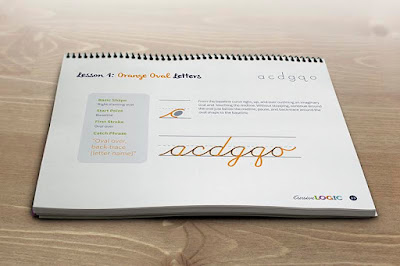 *Letter Strings:  Rather than teaching each letter individually, the program instead teaches all the letters that share the common shape together in a connected string, allowing the letters to reinforce each other and has the student writing in cursive from the very first lesson.

*Color Coding:  Each letter string has a theme color that helps the student remember the shape.  For example, letters that "Oval Over" are part of the "Orange Oval" string

* Catch Phrases:  CursiveLogic uses catchphrases to be used as memory aids to help develop muscle memory and give the students a mnemonic that they can return to over and over.  Students learn a simple, rhythmical chant that describes the path of the letter shapes being formed.

*Real Words:  Due to the fact that CursiveLogic teaches groups of letters instead of individual letters in each lesson, students can write real words at the end of the first lesson.

Before we ever started the workbook, I took the time to watch the instructional webinar includes with the purchase of the CursiveLogic Quick-Start Pack.  This is a 48-minute video rental (rental is for 6 months of unlimited streaming from Vimeo and cannot be downloaded to your computer) that teaches the instructor how to teach the CursiveLogic method as well as what about this particular method makes it effective for teaching students cursive writing.  I found the video to be extremely helpful with many good tips on how to approach the lessons both verbally as well as writing on my dry erase board.  While it would be possible to teach the CursiveLogic method without the video, my opinion is that teaching would be much more successful after watching the video.

With the knowledge from the video in hand, it was time to sit down with Garrett and begin working on his learning.

Each lesson begins using the "Use, Start, Say" model.  First students trace the new letter string with their finger to help learn the proper letter formation.  They then trace over the letters with a writing instrument, with an arrow on the paper that shows the student where the letter starts.  Finally, they learn the catchphrase that goes with each string of letters. 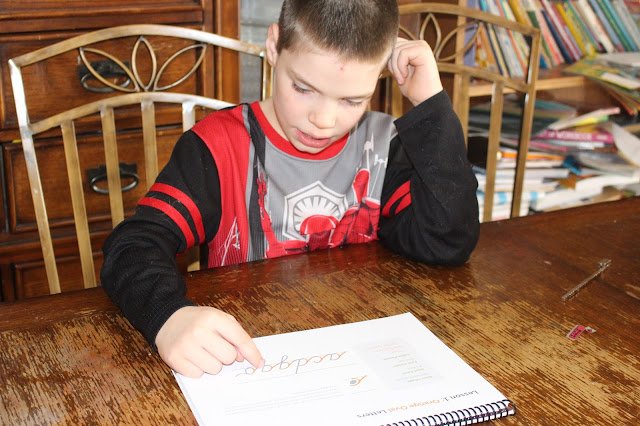 Tracing over the letters with his pencil. 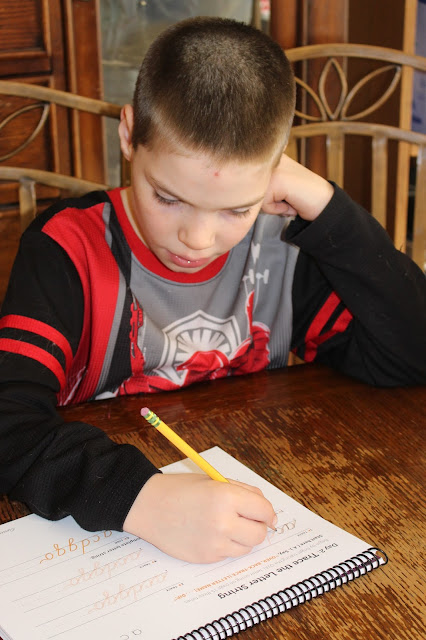 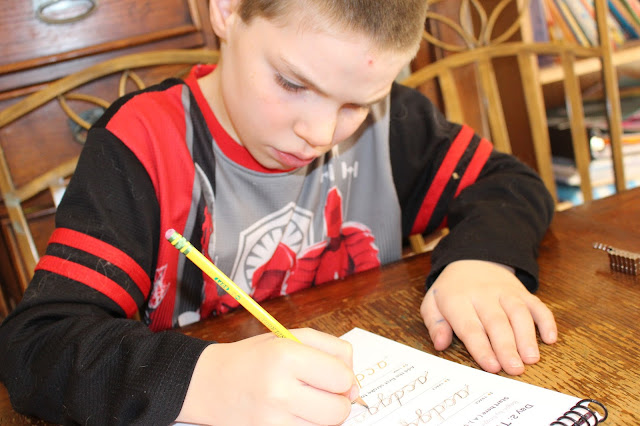 After successfully tracing the letter strings multiple times, students then begin to write the letters strings on their own without any guides to help them. 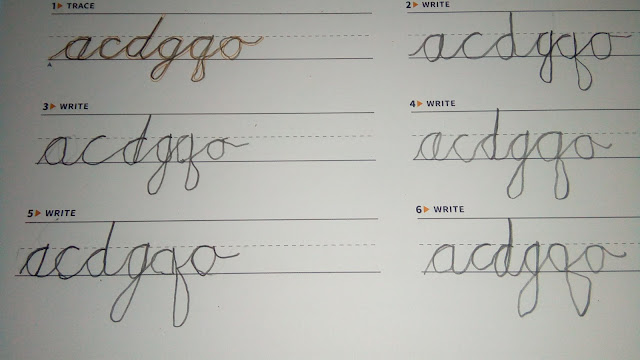 And finally, they begin to write words using the letters that they have learned. 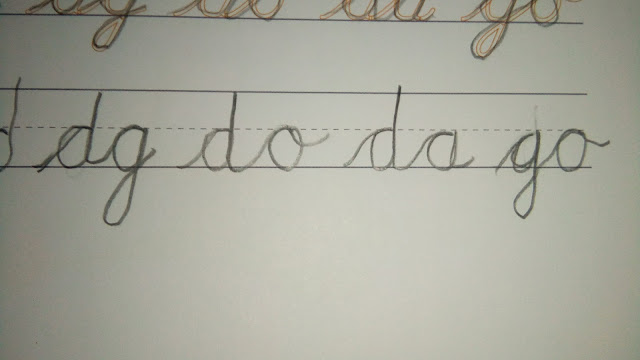 I have got to say, I have noticed a significant improvement in Garrett's writing since he has begun using the CursiveLogic program, both with his cursive writing as well as his print writing.  CursiveLogic has made him have to slow down and actually think about what he's doing.  Whether it's remembering to touch the middle line or bringing his loop to touch the top line, he's making a more conscientious effort to properly form the letters. I also hear him repeating the mnemonic phrases often as he's writing. The improvement has even been noticed by my husband who has found that he can actually read Garrett's writing now as in the past I had to "translate" for him.

One thing I will mention is that we had an older version of the CursiveLogic workbook which is significantly different from the new edition workbook that Garrett was using for this review.  I allowed Ashleigh to use the older workbook so that I could see the differences between the two side by side and in use to compare to one another.  What I found was that the new edition is much easier to use.  The lessons flow continuously in the new workbook - the student simply has to flip the page to the next consecutive even page in the book (Page 4 follows page 2, Page 6 follows page 4, ect.)  When they come to the back cover of the notebook, they simply flip the notebook over and continue with the "backside' of the pages (consecutive odd pages) until they reach the front cover and finish the book. However, the older notebook has the lesson printed on front and pack, meaning the notebook has to be flipped over in addition to turning the page.  The right-hand corner of the page is color coded as well, navy for even pages, mauve for odd pages, as a visual reminder to continue with the consecutive pages instead of flipping the book over. 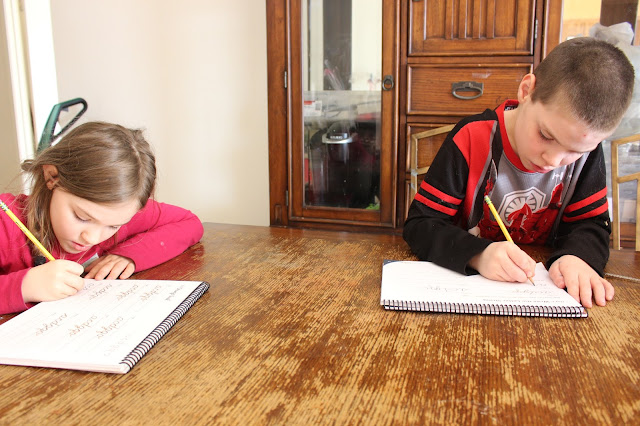 While Garrett (and Ashleigh) worked hard with the CursiveLogic workbook, I had the pleasure of coloring in the coloring book, The Art of Cursive. While not part of the CursiveLogic Quick-Start Pack, this coloring book is available for purchase and includes 27 line art pictures that incorporate words and letter chains to help reinforce the skills learned during the CursiveLogic Workbook. 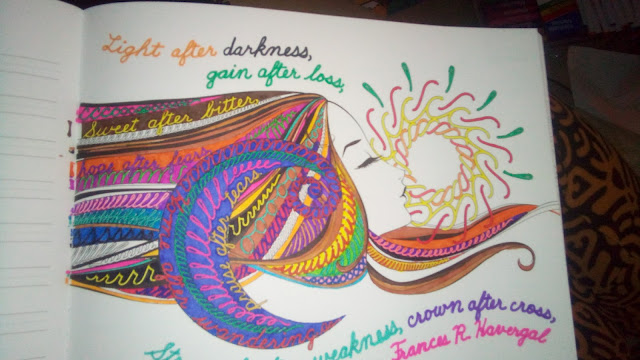 The pages in the coloring book are printed on heavyweight paper, making them ideal for markers, although I highly recommend a set of very fine point markers for the many teeny tiny spaces created by all the beautiful looping letters. 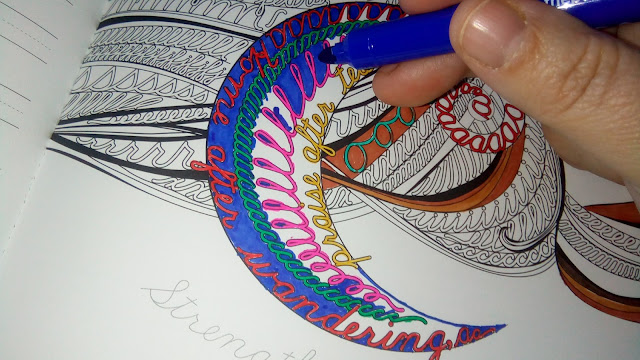 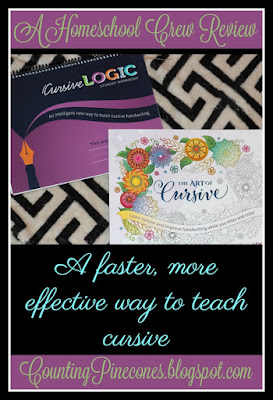 You can get more information about CursiveLogic by visiting their website. You can also find them on Facebook.

Posted by Brenda Prince at 6:39 PM