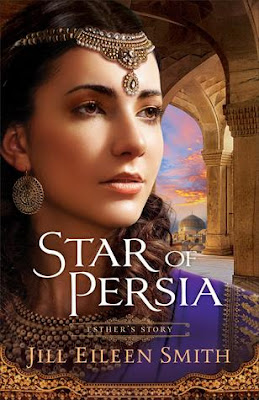 I have always liked the story of Esther in the Bible.   In a book where story after story is about men leading and making changes, the story of Esther (along with the story of Mary) show us how God can use women to move mountains as well.   So when I was given the opportunity to get  my hands on a review copy of  Star of Persia: Esther's Story by Jill Eileen Smith, I knew I was going to enjoy it.

In an effort to complete a war his father had planned to win, King Xerxes calls every governor, satrap, and official in his vast kingdom to his palace in Susa to strategize and feast. When they finally leave, he decides on one more week of frivolity, which ends in the banishment of his favorite wife, something he never intended to do. But when he discovers Esther, Xerxes is sure he has a second chance at happiness.

In her wildest dreams, Esther could never have imagined that she would end up as queen of Persia. Yet she knows better than to become complacent. Another of Xerxes's wives is vying for position, and his closest advisor has a deep and dangerous grudge against Esther's adoptive father. Caught in the middle of palace politics, Esther will find herself in an impossible position: risk her life or consign her people to annihilation.


Star of Persia: Esther's Story is a fictional telling of Esther as told by author Jill Eileen Smith.  Smith is a master Biblical historical fiction author, having previously written series the Wives of King David, the Loves of King Solomon, and the Wives of the Patriarchs, each which focuses on a chosen woman of the Bible.  Esther's Story is no different, as Smith once again weaves a beautiful story that really brings Esther to life for the reader.  She also really beings minor characters such as Vashti to the forefront, allowing us to feel and understand them as well.  The excellent writing makes them relatable, taking them off the Biblical pages and turning them into real people to the reader.

As with any Biblical historical fiction, the author takes liberties by including situations, dialogue and events that aren't found in the Bible. However, Jill Eileen Smith always does a great job of still maintaining a Biblical sound story.

Overall, this is a great book and I highly recommend it for anyone looking for an inspirational, fictional book regarding Biblical persons.