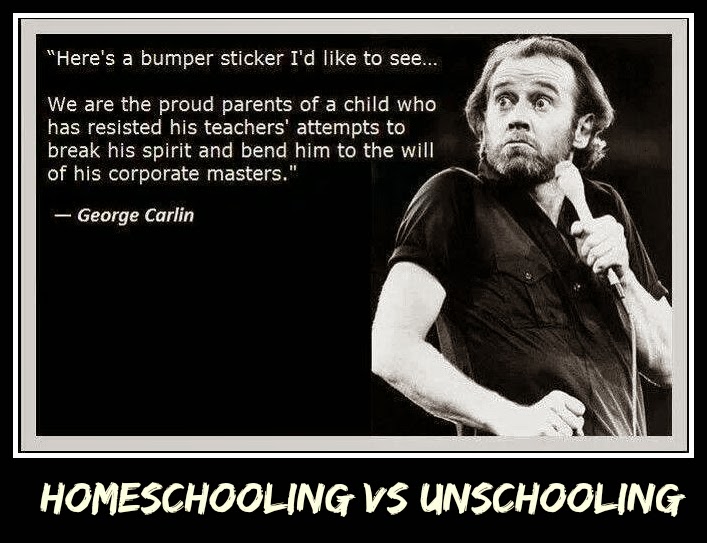 Going to go off on a bit of a tangent here so our lessons will be in the next post. But, there's something I want to kinda get off my chest and explore a bit in writing.

Being a homeschooling mom, I find it very helpful to be a member of various groups of like minded people who also self educate their children. I enjoy seeing how others do things differently and many times I am able to take away different things to try with Ash and Garrett with various degrees of success. Over the course of the last few days, I've been reading things that completely make me rethink my ideas of what "unschooling" is and I think we will just be classifying ourselves as very lax homeschoolers instead.

I do like the idea of a child led education environment where the kids get to pick and choose what subjects are of interest to them. This comes in quite handy with Garrett as if he's not interested, he's not going to pay much attention.  And so I considered our home studies "unschooling" because we didn't follow a schedule of math followed by english, followed by social studies, followed by science, followed by health type of learning day. I don't break out the various textbooks that I bought on any given day and force the kids to sit down and study them but instead we jump around and pull information from various sources. Yet we never truely were unschooled I guess because we did use books and I did steer them in the direction of various subjects even if I allowed them to pick what we wanted to study within that subject.

Yesterday I posted in a thread stating that I do not believe my kids should have sex as a teenager. Oh holy hell, the crap storm that started. I wish I could turn back time and not have posted at all. Suddenly I was a bad parent. I was told I was an evil authoritative parent who is restricting my child's natural curiosity and autonomy and have in essence removed their right to consent in what to do with their bodies. I was told that by restricting my children from exploring sex on their own regardless to age, I was disobeying the fundamentals of unschooling. If that's the case, I don't want to unschool.

I wish I had asked these handful of women how old their children actually were and how old they themselves are. I'd be willing to bet their children are probably still small and do not have teenagers. Actually one who criticized me the most did state she was nursing a child at the time she was writing. I'm also willing to bet they are young themselves. The fact that I'm nearly 40 and have lived a life knowing that some rules are set in place for reasons probably factors severely in why the idea of letting my kids have free reign to do whatever they want, when they want, doesn't work for me.

I'm not one to criticize how other parents raise their kids. I see alot of unschooling parents say they don't restrict television and computer usage, do not give their kids chores, they don't set a bedtime for their kids, no curfews, ect. I think doing these things is a disservice to our kids though. The responsibility of a parent is to teach our kids responsibilities and that certain behaviors result in negative results. If they are taught they can do anything they want, when they want and that they don't have to do anything they don't want to do, what happens when they join the workforce and are given restrictions, deadlines and demands by their boss?  Without the knowledge of knowing there's a time for play and that follows after other responsibilities, then they will either lose jobs or have a hard adjustment period until they learn that lesson.


I do not consider myself an authoritative parent but I also know that my job right now is to parent and not to be my kid's friend. I do not see myself as a bad parent because I do not allow my 14 year old to go out and learn about sex through exploration with some young boy. What exactly does that accomplish? Sure they learn first hand about the physical aspect of sex but they will most likely also learn about the joys of sexually transmitted diseases first hand as well. They will also learn that sex is nothing more than a physical act between two people rather than learning about the emotional closeness between two people that would normally lead to sex.  My son is too young to even know what sex is right now but even with him, restrictions apply. By the unschooling philosophy I'm suddenly being told I should adhere to, I should never restrict his curiousity. Well, my son has a curiosity of the outdoors. To the point that he has opened his window at the early hours of morning when others are asleep and has gone exploring. Maybe I'm doing him a disservice by restricting his curiosity but you can bet your happy butt I put locks and alarms on his doors and windows to make sure he doesn't get out. If that makes me a bad parent well, so be it.

I am not my children's friend. That is not my responsibility right now. My responsibility is to teach boundaries and responsibilities to my children in the hopes they grow to be responsible and contributing members of the future generation of this world. If I do my job right then they will hopefully see me as a friend once they are adults but for now there's a line between being their friend and being their parent. In school a friend was that person who was by your side while you're getting in trouble because that dumb idea sure seemed fun at the moment. My kids have plenty of friends, they don't need me to be one as well. That doesn't mean I cannot be a trusted ally to my children as they learn. I can be someone they come to talk to and my oldest knows she can talk to me about anything. The difference is, where a friend would tell my kid to go ahead and have sex with a boy because he's the cutest guy in the school even if he's never spoken to my daughter before last week, Mom is going to tell her that obviously this guy is only interested in one thing and that's not whats between her ears. That she will only be a line of conquests in a list of many for this boy and once he gets what he wants, he will move on. Mom will be the one telling her that any boy who respects her is not going to try to get in her pants immediately and will not pressure her to do something she doesn't want to do.  A friend is the one who will tell my kids a few alcoholic drinks at a party won't hurt her, that all the cool kids do it. A friend will say hey, go ahead and drive that car drunk, nobody will know, I do it all the time.. Mom is the one who tells her she shouldn't drink but if she does, I would rather her call me and tell me to come get her rather than driving or getting in a car with someone who has been drinking. My daughter knows if she calls me, I'll get her, no lectures or yelling, so long as she makes it home safe.. Sure, Mom will sit down with her the next day and discuss it with her but I'd rather that conversation wait til the following day when she's home safely then risk my child avoiding a lecture that night and wrap herself around a light pole or kill a family on the road.

I like the idea of child driven education  but this concept of no restrictions is not for me.
Posted by Brenda Prince at 12:17 PM