I felt we had a pretty productive day today with our classwork and we hit a huge milestone today as well..

The kids had said they wanted to start hearing stories of Greek/Roman mythology. This was started by watching "Drive Thru History" and discussing the Roman Colosseum as well as hinting vaguely on them when discussing Italy. We will be reading from the books Favorite Greek Myths by Bob Blaisdell and A Wonder Book for Girls and Boys by Nathaniel Hawthorne.  Before our reading today, we started by watching The History Channels episode on Zeus from "Clash of the Gods" series.  While there are some topics in this series that is a bit too mature for my kids, those topics are only briefly mentioned and went over their heads. The main story of Kronus, Rhea, Zeus and his siblings were easy enough for them to follow and the series was able to keep their attention. We followed this up by reading Chapter 1: Gods and Titans out of Blaisdell's book and discussed what we learned. I was pretty surprised how much they actually had comprehended regarding Kronus swallowing his children, Rhea substituting a rock wrapped in a blanket for the baby Zeus, and then Zeus tricking Kronus in order to release his siblings.  The kids really seemed to enjoy the reading but were upset as our kindle version of the book has no pictures.

After having mom read to them it was time to work on their individual reading. This is always an issue with Garrett, who will not sit still long enough to read a story. However, with Garrett I am able to spell out a word and he is able to tell me what the word is or I can call him over, point to a particular word and he will again tell me what it is.  Today I decided to try Ashleigh with her individual reading while Garrett worked on math skills with his leappad.  Ashleigh chose to read the Level 1 reader Cat Days from the Penguin Young Readers series.  I should explain, we do not do sight words in our house. I'm strongly against the concept of sight words and the idea of getting a
child to memorize a list of words and call that "reading". In my opinion, reading is about phonics, being able to sound out a new word, put those sounds together and deduce what the word is. I feel skipping phonics and instead relying on memorization puts a child at a disadvantage when encountering a new word that wasn't memorized.

Cat Days was simple enough for a first read as there was a good amount of repetition in it with new words to sound out. Ash was easily able to read the book out loud by herself with minimal help from Mom.  Dad happened to call at the time while we were reading and he was able to hear her reading aloud by herself.  It was a proud moment for all of us. 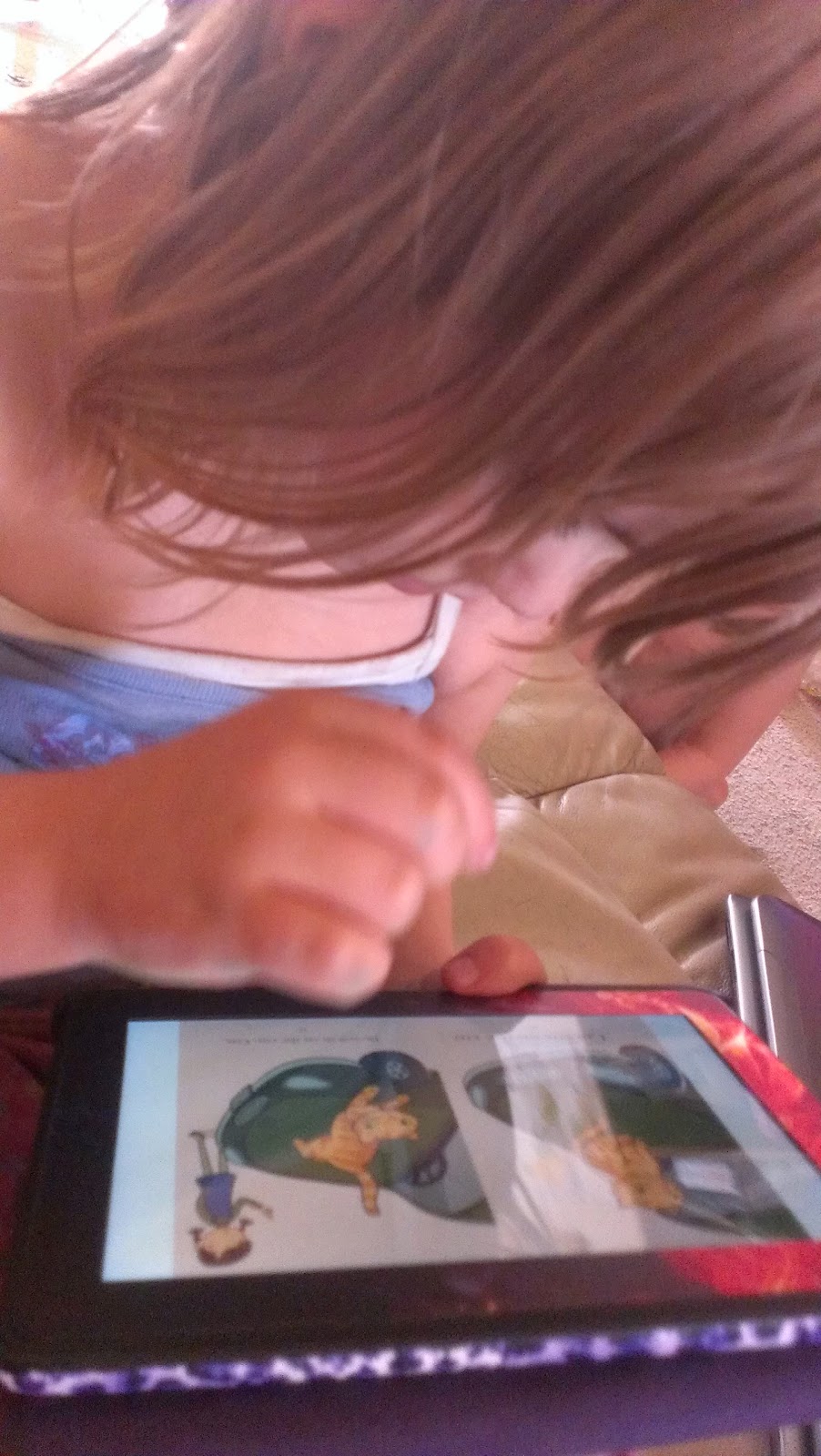 We ended the day by filling Garrett's request for a quick history lesson. Reading from A Story of the World, we learned about Nomads, how they lived and how they eventually migrated to the Fertile Crescent. The kids really got a laugh out of today's lesson. The story of Tarak eating lizards or not having a bath for 7 years really got a rise out of them.  The concept of eating lizards caused lots of giggles until mom told them that while she had never eaten a lizard, she had eating frog legs and that they tasted like chicken. The kids have decided they want to have Lizard Stew (somehow, I do not see this happening anytime in the near future.. haha)  Then when we got to the part where Tarak and her brother are playing in the river and it says that they hadn't had a bath their entire lives, another giggle fit ensued.  Both kids said "ewwwwww" and said the water would be nasty after they finally bathed. We had a great time with today's history lesson (opposed to yesterdays lesson) and I think the kids are really looking forward to continuing lessons.  Unfortunately, our "artifacts" were not completley dry so we were not able to paint them today. Garrett's mug is now a cup because our cat knocked the handle off and it broke in half but Garrett wasn't too upset about it. Tomorrow during our crafts time, we will paint the cup and dish and we will also be preparing our "Ocean Box" to go along with our Apologia lesson.

After all our lessons were done, we put Disney's Hercules on just for a fun watch to go along with our 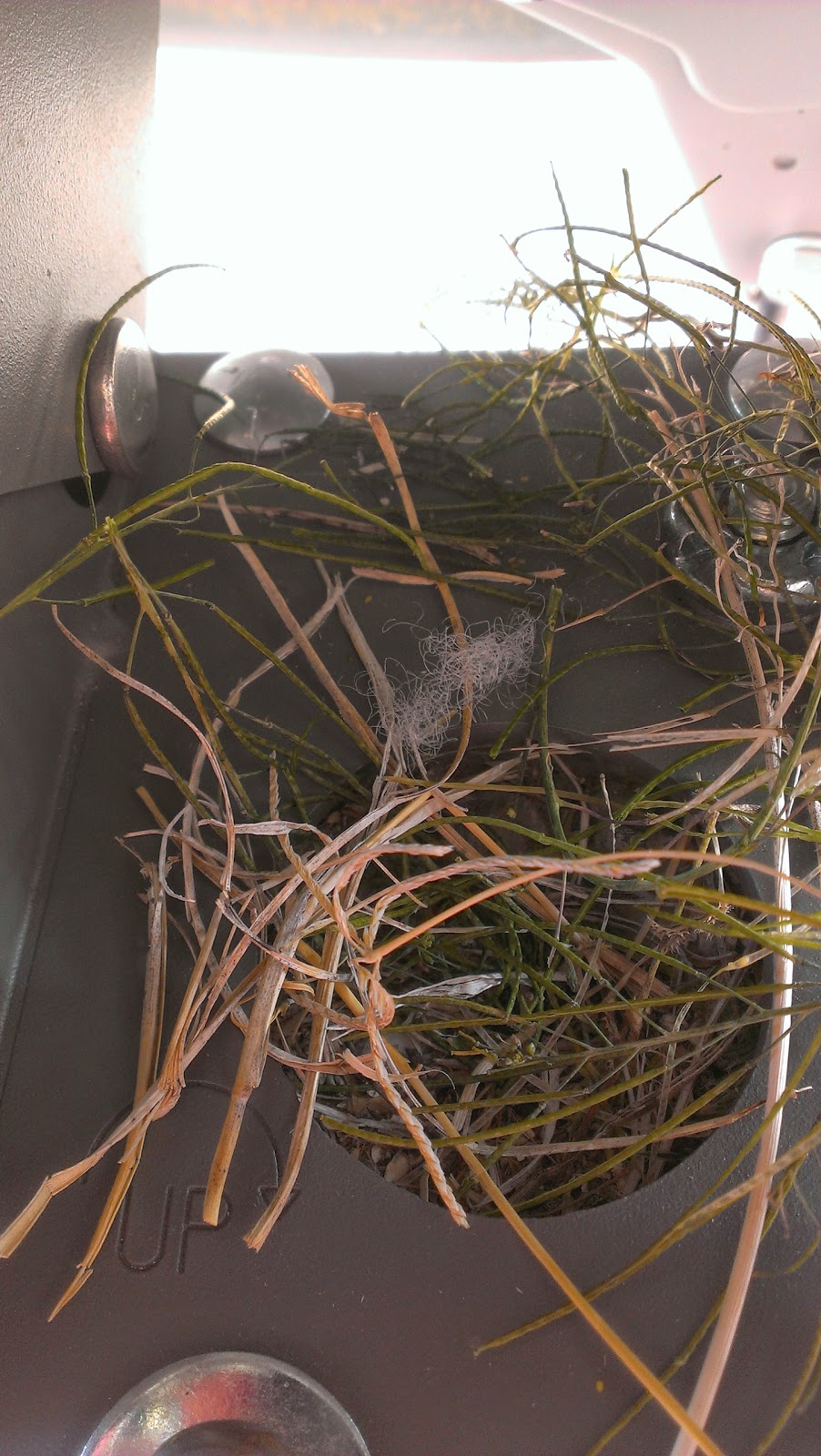 Mythology study.. Ashleigh hadn't seen it before (how we have ever Disney movie except this one I don't know) and really enjoyed it. Garrett didn't care much for it. He would rather watch documentaries then cartoons, with exception to The Magic School Bus.

Both kids have been keeping a close eye out the window watching the pair of finches building their nest. We went out to have a quick look and the birds have busy. We're starting to see a familiar circular shape to the sticks and grass the birds are carefully placing in our satellite dish.  I wish there was a way to hook up a camera of some sort so that we would be able to see the nest making in progress up close but we are happy with viewing through the window.