What's In The Sky (August) 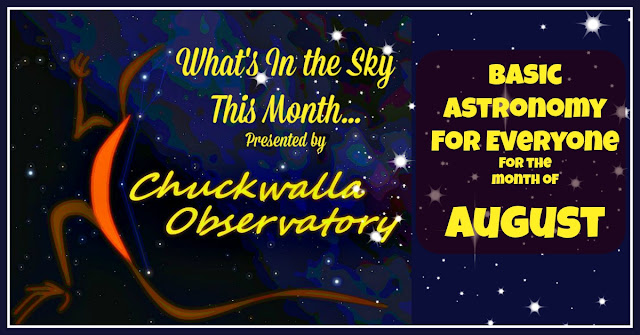 August is here and with that comes another installment of "What's in the Skies this Month?". Charles from Chuckwalla Observatory has once again been nice enough to take the time to provide us with a quick look at what the amateur skywatcher  can expect to see in the heavens this month.  Thank you again Charles.

August 14th is this month's new moon. No moonlight means great opportunities for observing deep sky objects. There will be practically no moonlight to interfere with the big meteor shower this month.

The full moon for August falls on the 29th. Because of the ease of catching fish from freshwater lakes during this time of year, this full moon was known by Native Americans as the Full Sturgeon Moon.

This month's full moon will also be a Supermoon because it's full phase coincides with it's closest approach to Earth. The moon will look slightly larger and brighter during this time.

The only major planetary player this month is Saturn. Although Saturn's prime time for viewing has passed, it is still readily viewable toward the south at sunset. It will not remain that way for long, however. As the month goes on it will be lower and lower in the horizon after sunset, presenting less than optimal observing conditions. Catch Saturn while you can before she bids farewell for the fall and winter months.

Venus, Jupiter and Mercury are engulfed in the light of the setting sun. You may be able to catch a very short glimpse of Jupiter before it sets over the horizon, but for the most part these planets have retired from view. It's possible to see Venus during the daylight with a telescope, but I only recommend this for seasoned amateur astronomers. It's close proximity to the sun makes it a dangerous target.

The ice giants Uranus and Neptune are making themselves known but you'll have to stay up late to catch them. Neptune rises first in the late evening hours, Uranus following close behind nearer the A.M. Prime time for these two is close, however. Neptune is at opposition in September, followed by Uranus in October. While small and not much to look at as far as fine details are concerned, they make up for it with their vivid coloration. Uranus appears seawater green while Neptune is a vibrant hue of blue. 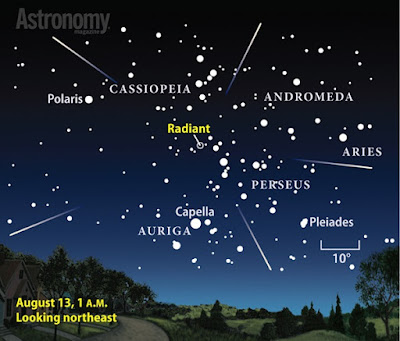 The month of August means it's time for one of the most prolific meteor showers of the year, the amazing Perseid's! The meteors have already started, but they peak on the night of August 12th and into the morning of August 13th.

It is called the Perseid meteor shower because the meteors appear to radiate from the constellation Perseus. The shower can produce up to 60 meteors per hour at peak and is known for larger numbers of very bright meteors.

There will be no interference from the moon this year, so prepare for a fantastic show!
Posted by Brenda Prince at 9:47 PM