Walking with the Waodani (A Schoolhouse Crew Review) 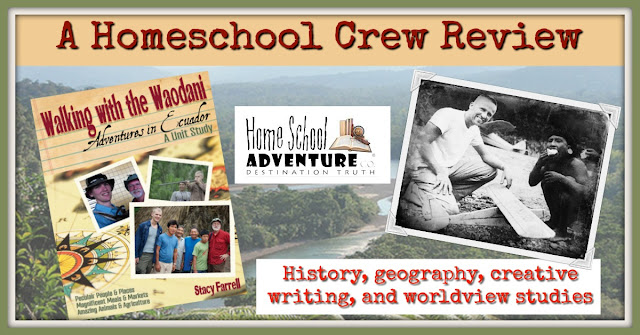 There have been many times in my homeschooling research that I have come across the names Jim Elliot and Nate Saint but I was unfamiliar with both of their stories until recently.  I could tell you that they were missionaries but nothing more than that.  However, the kids and I have recently worked though Walking with the Waodani, the latest study from Home School Adventure Co. and we have all had such a wonderful time learning about their story.  For the purpose of this review, we were given a "preview" of the first two lessons of the unit study in downloadable PDF format. 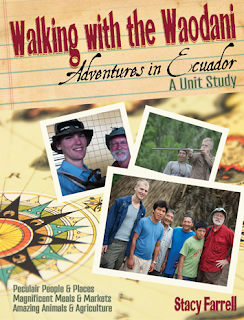 For those unfamiliar with their story, pilot Nate Saint along with Jim Elliot, Ed McCully, Pete Flemming and Roger Youderian all lost their lives while trying to reach the Waodani people living in Ecuador.  The Waodani people were known to be a savage group of indigenous people and stories of their brutality were known throughout the other people of Ecuador. The five missionaries had hoped to make contact with the Waodani because of these stories, in the hope to help eliminate the violent attacks to both other people living in the area as well as those outsiders who entered the Waodani territory.  While the five men did make what appeared to be initially friendly contact with members of the tribe, they were shortly attacked and killed a few days later.  However, through some really amazing chains of events, their deaths became a powerful statement of forgiveness and today the Waodani people have laid down their weapons and have instead embraced the teachings of Christ.

The Walking with the Waodani study from Home School Adventures is not so much about the Nate Saint story but more a study of Ecuador and the lives of the Waodani, past and present.  It came to being after the author's son had become friends with a young man who had just recently returned from Ecuador and had spent time with one of the surviving Waodani members of the raid that had taken the lives of the five missionaries.  As the young man shared his story of visiting Ecuador and the Waodani people, the author felt compelled to write this study for other homeschool families. Through vivid photographs and the exploration of the people, flora and fauna of the Ecuador jungles, students learn about the fated mission and how those events changed the lives of the Waodani from that day to where they are today.

Not being familiar with the Nate Saint story, the kids and I jumped in and within the first lesson, we were hooked.  We discussed the five missionaries who lost their lives trying to spread God's word to the Aucu (now called the Waodani) people.  We also talked about some of foods that the Waodani eat, how they hunt and some of the animals that can be found in the jungles of Ecuador. This led to some really fun moments, as the kids went on a "hunt" with blowgun (straws) and poisoned darts (spit balls) to take down a vicious jaguar (their 17 year old sister).  We also talked about whether or not we would eat Palm Weavil Grubs (we all said we might eat them if they were cooked - as the study says they taste like pork rinds.. yum).  I think I might purchase the biography about Nate Saint (one of the original missionaries) from YWAM publishing for after this study so we can continue to learn more about his life and mission. Through the lessons, we also learned about some of the tribes original beliefs, such as they believe when you die you must successfully jump over a huge snake in order to pass to the afterlife - failing to do so would result in being re-incarnated into a lesser creature such as a termite.  We also learned about Steve Saint, son of Nate Saint and the man behind I-TEC (Indigenous Peoples Technology and Education Center) and how through his own mission, the Waodani people have been able learn skills valuable to them to interact with today's society.  Each lesson ends with a series of worksheets that offers activities for both younger and older students, from drawing pictures of animals to writing about a given topic.
This study unit covers many different things but it only briefly touches on those subjects. However, the author gives a very indepth reference page following each lesson that suggests websites and other outside reference to learn more.  We found ourselves wanting many times looking at these resources because the lessons were very interesting and would whet our appetite for more.  From watching the movie End of the Spear and a documentary by Elizabeth Elliot, to reading various Wikipedia sites and viewing I-TEC's website, we learned so much more by taking advantages of the suggested resources.

While still a work on progress, my family and I look forward to seeing the completed unit study when it becomes available soon. 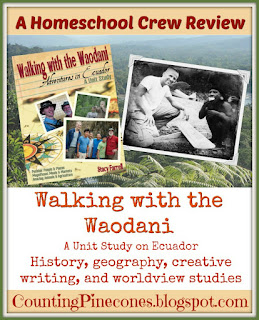 For more information about Home School Adventure Co. and the Walking with the Waodani unit study, visit their website or one of their social media links below:

Posted by Brenda Prince at 9:15 AM