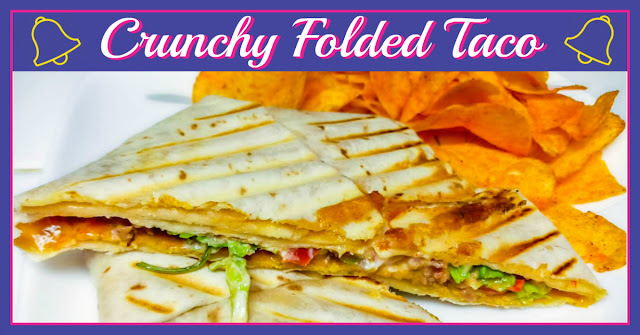 I've mentioned before, we don't eat out a whole lot because it's expensive, especially now that Garrett eats adult portions rather than kids meals. However, there's some really good fast food out there and from time to time, we want to enjoy something not so healthy.. LOL

You might already be familiar with my F'arby's recipe.  It's my version of Arby's Beef and Cheddar, one of my husbands favorite sandwiches.  Today, I bring you another knock off recipe that's super easy.  This time we take on Taco Bell's Crunch wrap. 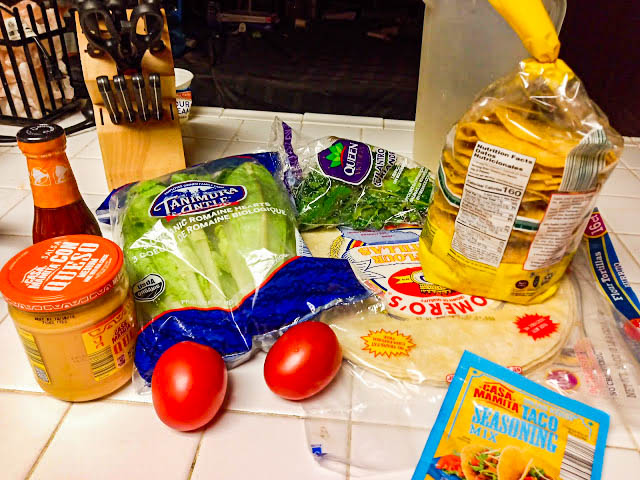 First, we will be making taco meat.  Start by browning your ground beef/ground turkey  until no longer pink. Depending on the fat content of your ground beef, drain the fat off your browned meat if you have excess grease from the browning process. 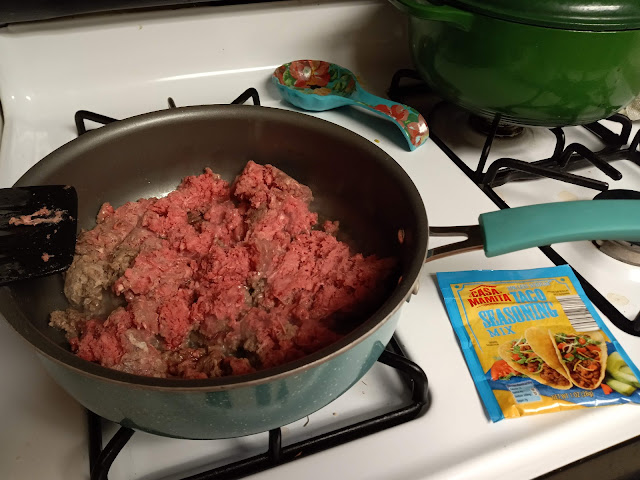 Once your meat is browned and the fat drained off, add the taco seasoning and 2/3 a cup of water.  Mix well to make sure the beef is fully seasoned. 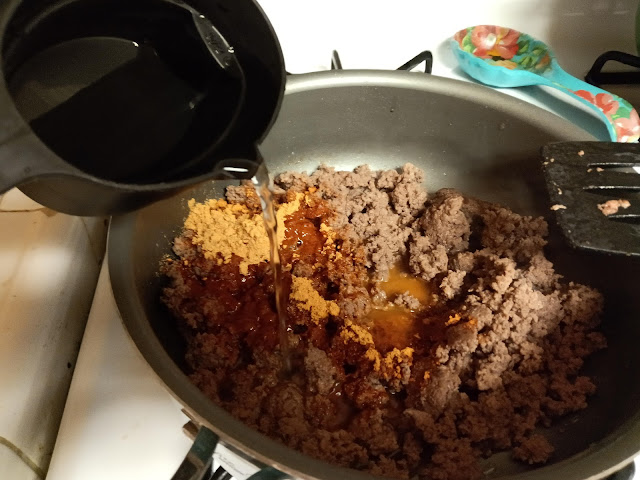 While browning the meat, dice up your lettuce, tomato and cilantro.  Tomato always brings Picket wanting a snack, so I save a lil slice of tomato just for her ;) 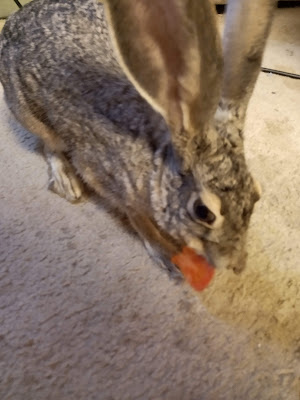 I like to create an assembly line to expedite the process of preparing these wrapped tacos.   Once the meat is finished, it's time to start wrapping.  Start with one flour tortilla.  I use the larger burrito style flour tortillas - the tend to wrap well with plenty of tortilla to overlap with and flour holds up better to folding than a corn tortilla does. 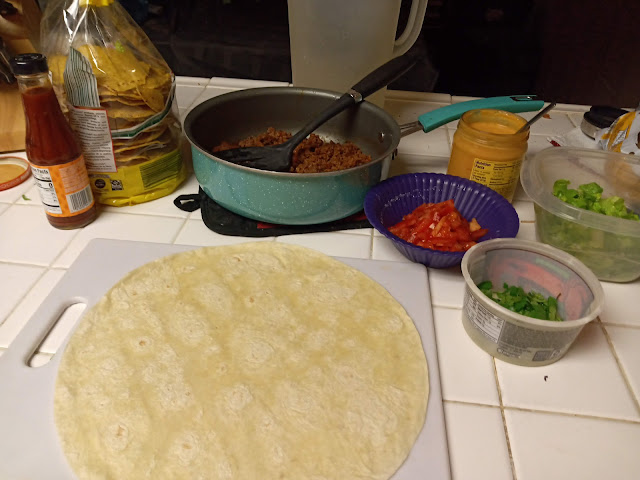 Using a spoon, add a bit of the cheese dip and the spread it evenly over the center of the tortilla, roughly the same size as the tostada chip.   Sometimes I change this part up a bit and use refried beans instead of cheese dip in this step, just to add bit more protein. 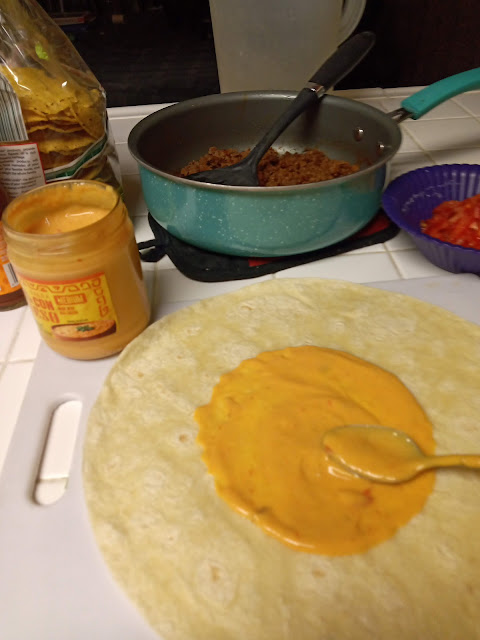 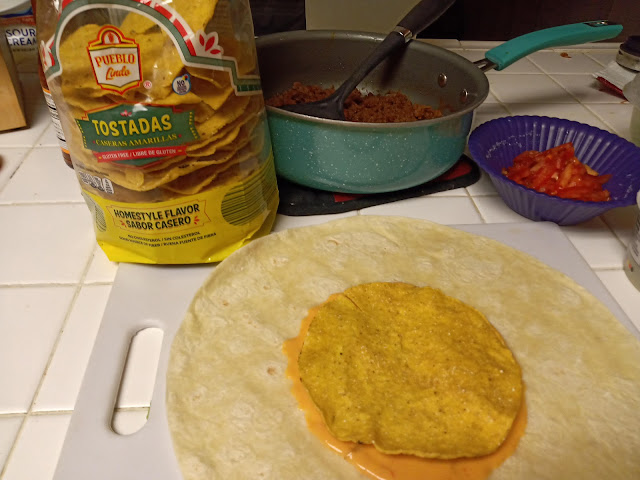 Add a few spoons of taco meat on top of the chip. 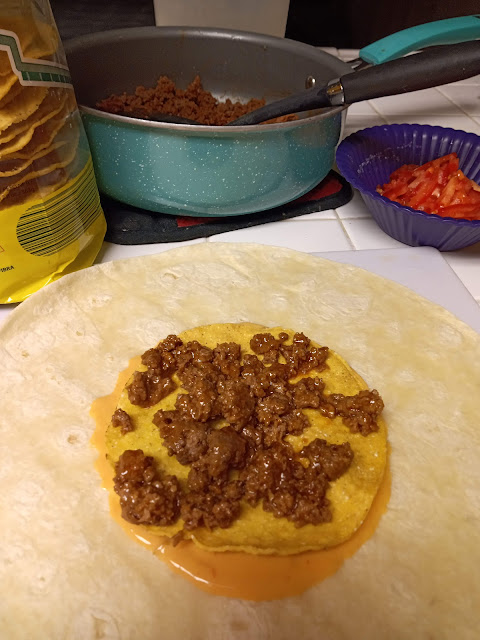 Put all your favorite taco toppings on top of the meat.  We like using tomatoes, lettuce and cilantro. You can also add jalapenos, onions, pico del gallo, avocado or any other toppings you might like.  This is also where we add taco sauce, just a drizzle over the top. 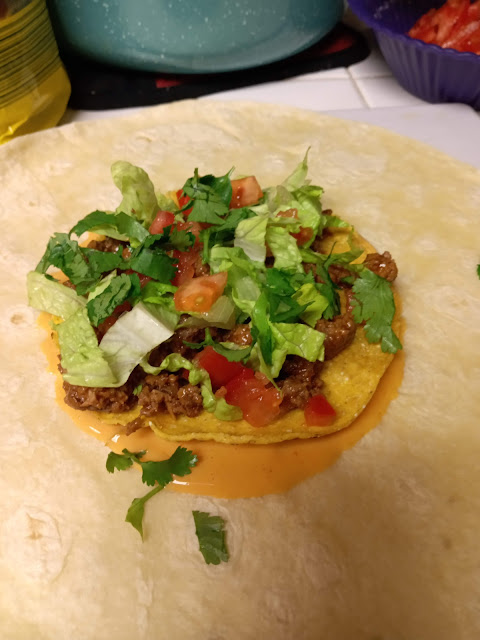 It's at this point I had a bit more cheese sauce to the outside edge of the tortilla.  I found that adding this bit of extra cheese dip helps to hold the wrap together during the folding - almost like a glue.  And we also added a drizzle over the top of the toppings. 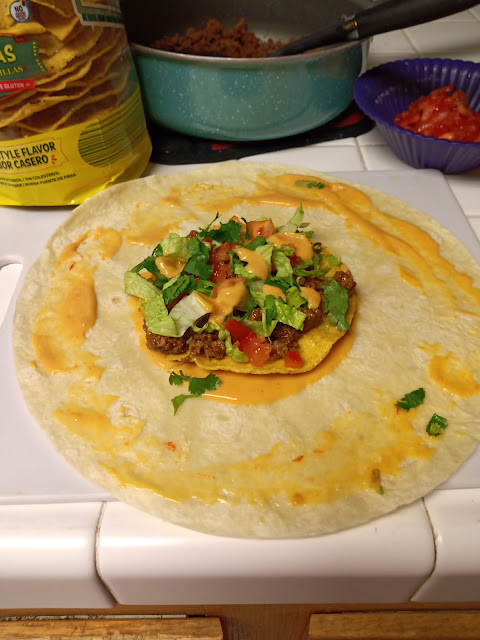 Fold the bottom of the tortilla over the tostada shell.  Fold in each side, creating a bit of an envelope to hold all the goodness inside. 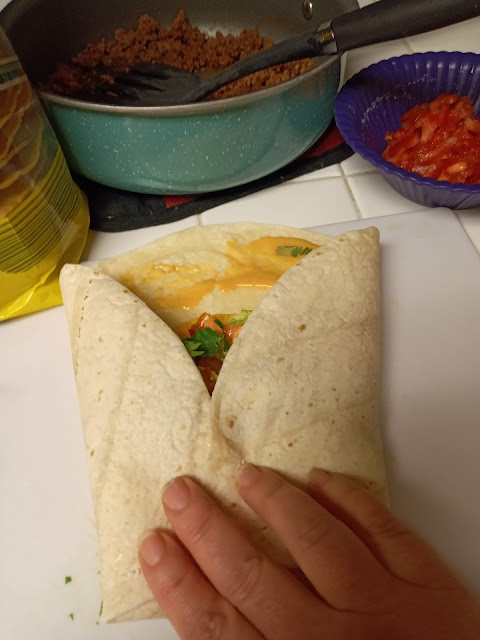 Fold the last two sides over  each other to create a pentagon shaped burrito.   I have found this folding method works best. 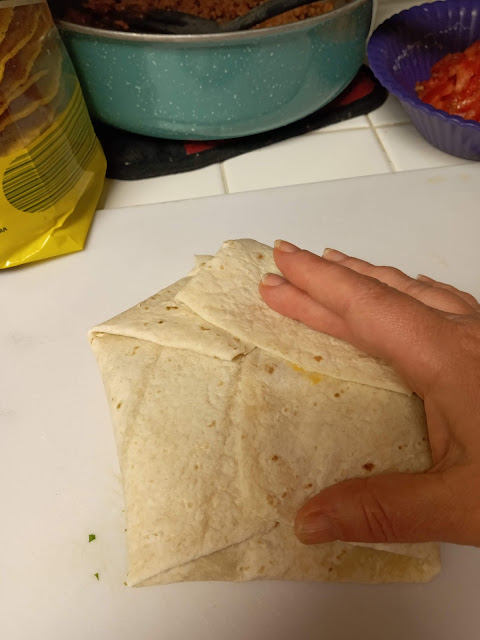 I use two different methods in cooking our wrapped tacos.  Before I purchased my panini press, I would heat up my cast iron skillet over medium high heat, place the wrap fold side down  and cook for roughly two to three minutes per side, just long enough to brown the tortilla and crisp it up. 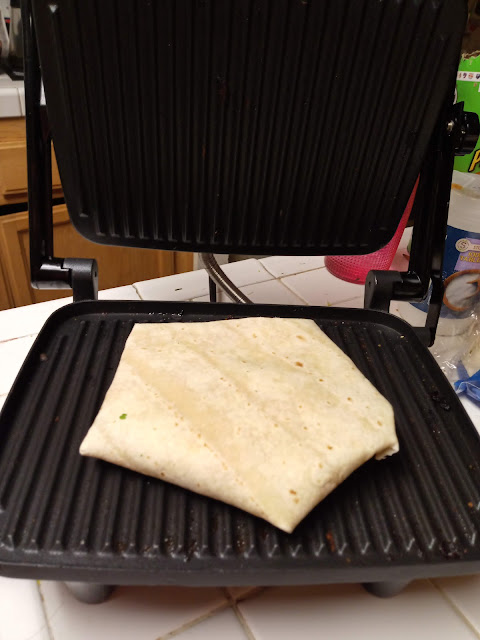 However, now with the panini press, I can simply lay the wrap inside (again, fold side down) and close it up for about 2 minutes. 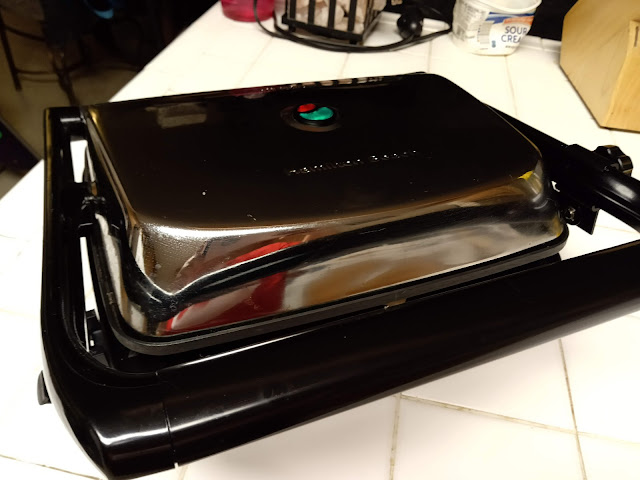 This gives the wrapped taco nice grilled marks and seals it up. 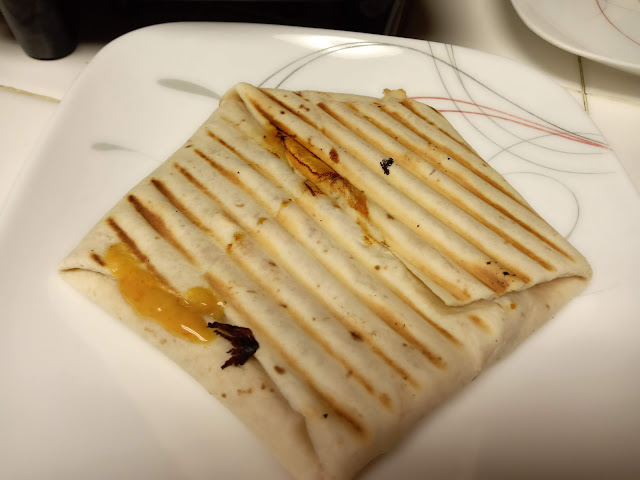 Of course, if you like Crunch Wrap Supreme, you can simply add sour cream before sealing - and you don't have to pay the extra that Taco Bell charges ;) 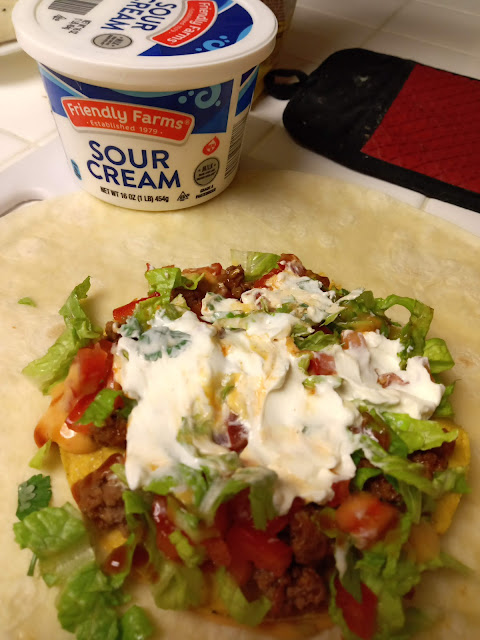 And there you have it, a simple copy cat recipe that is super easy to make that can be whipped up in less than 20 minutes.  And unlike the fast food joint, you know exactly what's going into your food and you're going to pay only a fraction of the cost you would eating out.  (A Crunchwrap Supreme is $3.59 per wrap) 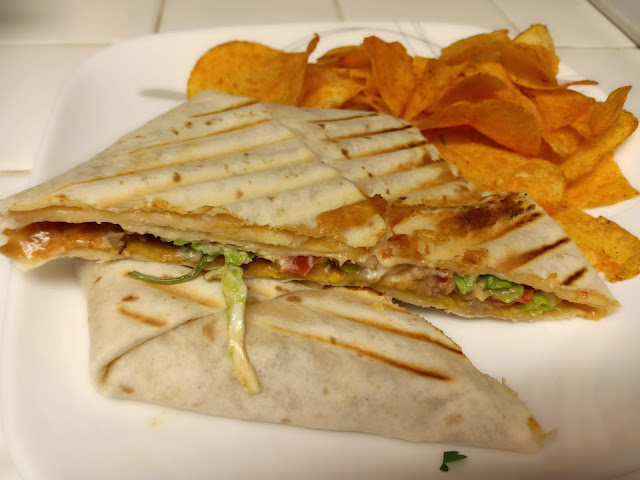 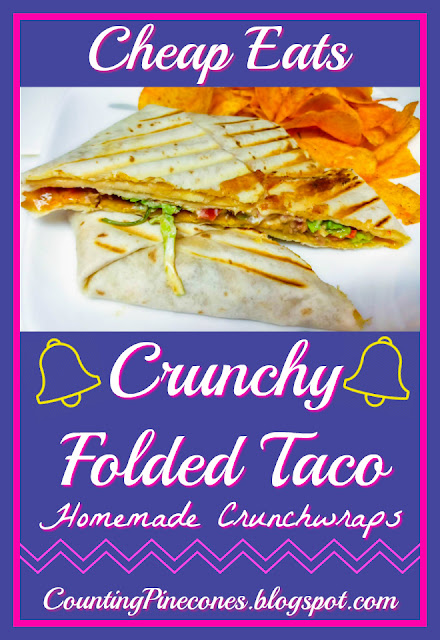 Posted by Brenda Prince at 9:46 PM