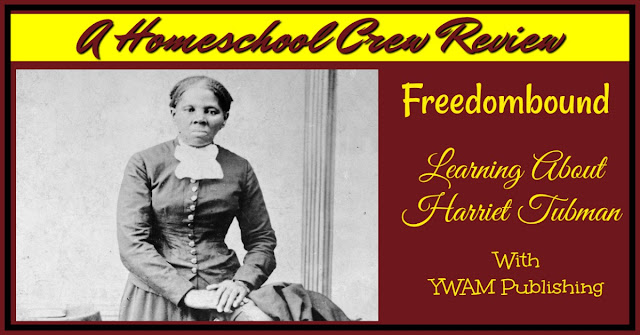 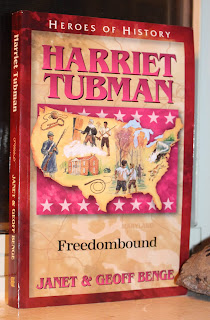 When I was in school, I found history to be extremely boring.  The teacher would say open your textbook to page such and such and the next hour would be spend trying not to fall asleep while taking notes on dates and events that were presented in a very dry, boring manner.  Thankfully, one of the benefits of homeschooling my kids is that we can learn history in more interesting manners than a cut and dry textbook.

One particular way we love to learn history is using the hero biographies from YWAM Publishing. Over the course of the last few years, we've had the opportunity to review four different selections from the Heroes of History series:  Captain John Smith, Alan Shepard, George Washington, and Daniel Boone.   When I was given another opportunity to review another selection from YWAM Publishing, I decided it would be a great opportunity to teach the kids about the woman who might one day soon soon be gracing the $20 bill - Harriet Tubman.  For this review, we were given a physical copy of the book Harriet Tubman: Freedombound as well as the digital copy of the Study Guide that accompanies the book.


About YWAM Publishing
YWAM Publishing is part of the YWAM (Youth With A Mission) Ministries that was founded in 1960 and offers a large selection of quality books written about figures whose lives not only had a huge impact in history but also showcase how their faith helped shaped them and how God used them to make a difference in the world.  With books about Presidents such as George Washington and Ronald Reagan, great inventors like Thomas Edison, pioneers such as Davey Crockett or Meriwether Lewis , Civil Rights icons like Harriet Tubman, Sports icons like Lewis Zamperini and Missionaries such as Nate Saint and Corrie Ten Boom and even people like Ben Carson who are making an impact today, there's so many options that are sure to spark interest in any reader.

YWAM Publishing brings each story to life through engaging biographies written by Janet & Geoff Benge.  Each book focuses on extraordinary people whose faith helped them to achieve some of the greatest accomplishments in history.

About Harriet Tubman: Freedombound and the Study Guide 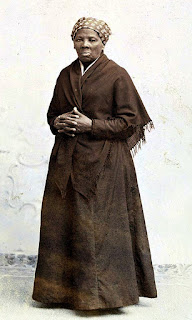 This 208 page paperback biography is written for readers 10 and up and follows the life of Harriet Tubman, one of the most prominent leader of the Underground Railroad during the days of slavery leading up to the Civil War.   Starting with her childhood, to her early days as a slave, the head injury that would plague her throughout here lifetime, thru to her days a the conductor of the Underground Railroad as well as a spy for the North during the Civil War, the story of Harriet Tubman comes to life thru a well written story about a remarkable women.


In addition to the biography, we were also given a digital study guide to be used in conjunction with the book.  Loaded up as a web page, the file gives access to the 61 page PDF file that contains a multi-subject study guide to help incorporate language arts, science, writing, economics, ect into the study while reading the book.

We tend to like using YWAM books as a read aloud selection and this time around was no different. We found that reading a chapter a day was a perfect pace for us.  The kids would use this time to eat their lunch while we sat together reading about this amazing woman.

The kids really enjoyed learning about Harriet and I'll be honest, I was learning right along with them.  I don't honestly remember learning a whole lot about Harriet Tubman in school, outside of the Underground Railroad.  Through the pages of Freedombound, we learned about some of the amazing things this woman did.   We learned that she was called Moses, because like the Biblical leader of the Exodus, she lead her people to freedom, first to Pennsylvania and then on to Canada when laws changed.  We also learned about her work during the Civil war, the work she did post war, and the recognition that she was given, including a shawl from the Queen.

During especially intense parts of the book, Ashleigh couldn't be bothered to wait til the following day and on a few occasions, I found her curled up in her reading chair jumping ahead to find out what was going to happen next. 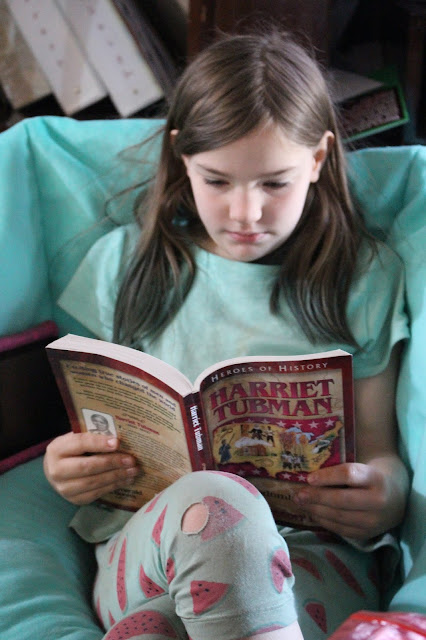 Once we finished reading the book, we decided to do a few of the activity suggested in the Study Guide.  Ashleigh loves making stuffed animals. so she quickly decided that she wanted to make the cloth doll of Harriet Tubman.   So a trip to the fabric store and this was her creation. 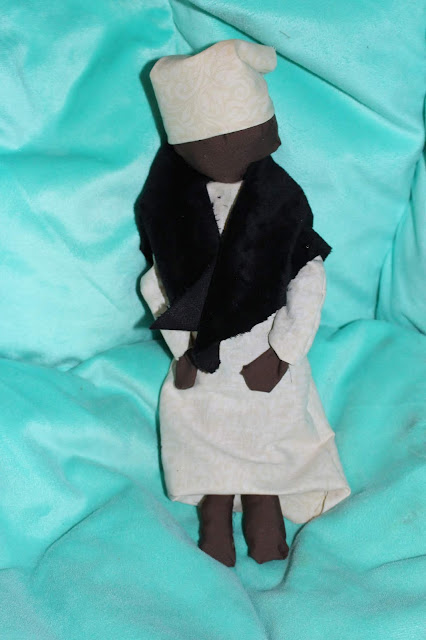 Other activities that we enjoyed were memorizing a few different quotes - one of which was from Harriet herself.  There is a section of quotes in the book that are easy to incorporate either as memory work or as copy work.  We opted to work on memorizing a few of them  - the first being "God - he's helped me six times, and He never failed on me the seventh either", a quote contributed to Harriet Tubman.  This was the first quote we began working on, so each time we read the at quote in the book, the kids would say it together.   The second quote we memorized was "A hero is no braver than an ordinary man, but he is braver five minutes longer" - Ralph Waldo Emerson. 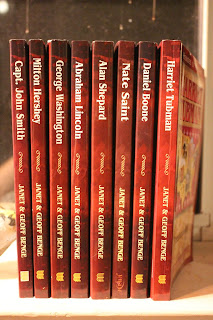 On another note - reading is one thing my son hates.  Even being read aloud to, he rarely pays attention and cannot wait til the selection is over so he can go on with his day.  However, this time around, Garrett asked repeatedly for me to read our chapter each day, making sure it was not forgotten.  After the book was completed, he asked which book we could read next from our selection of YWAM books.  This is the first time my son has actually ASKED for a book.  While I have a small selection of YWAM books that I have purchased and we will begin reading about Milton Hershey and Nate Saint in the upcoming weeks, I've promised him that he and I will set down together to select several selections from the YWAM catalog so that when we attend the Homeschool Convention in June, we can purchase them. I really like that there's such a wide selection of amazing individuals that he can choose from and I think we'll have a great time sitting and reading about George Washington Carver, Ronald Reagan and William Bradford, for example.

Reading about Harriet Tubman really whet our appetites for more of these types of stories and I hope that YWAM continues to increase their library collection. One particular hero that Harriet Tubman's story made me wish to see as part of the Heroes of History collection would be that of Frederick Douglass and I think he would make a great addition to their collection. 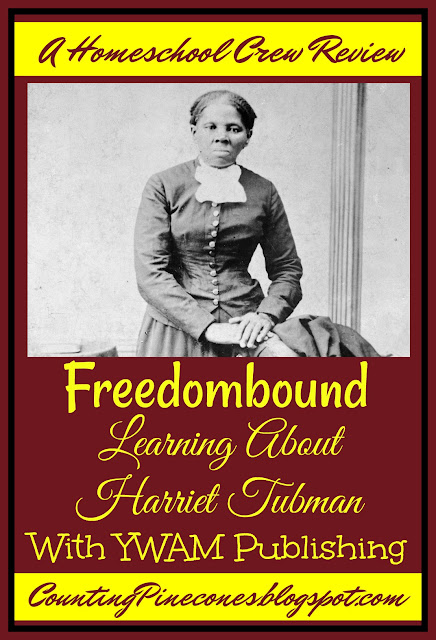 For more information about the wide selection of biographies available from YWAM Publishing, be sure to visit their website.  You can also find them on the following social media platforms:

Members of the Review Crew were offered a wide selection of choices when picking the book they would like to review.  Be sure to click the banner below to read reviews for any of the 30 choices offered.

Posted by Brenda Prince at 9:58 PM