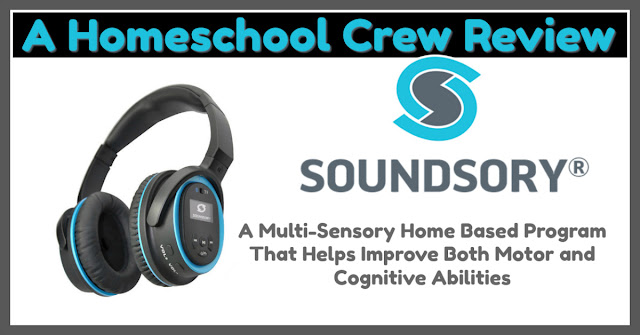 You may remember some time back that we reviewed Forbrain, a bone conduction headset that has really helped Garrett with his verbal skills.  Three years later, Garrett still uses his Forbrain on a regular basis to help with his pronunciation when reading aloud.  Because of the quality of the product as well as the success we have had with the product, we were super excited to be given the opportunity to review another product from the same company - the Soundsory  headset from Sound for Life Ltd. - designed to help with attention, concentration, focus and motor skills and coordination. 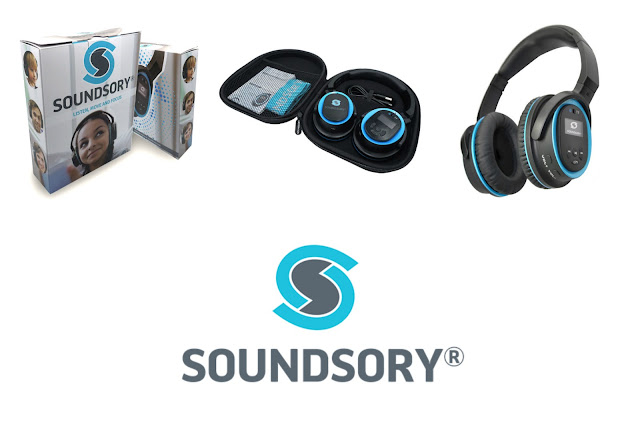 Soundsory is a multi-sensory program that is self contained within a over the ear, bone conductive headphone set The program is already preloaded in the headphones and is accessed from a digital menu on the headset. 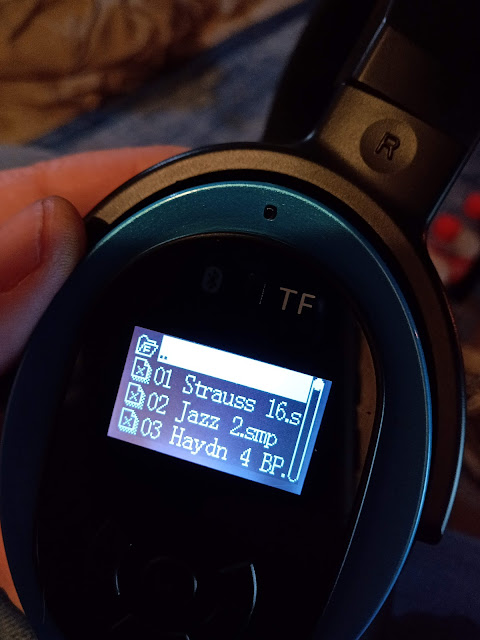 It consists of specifically designed music processed with neuro-acoustic modifications as well as a series of movement-based exercises.Soundsory can help people with:- Motor delays, Balance and Coordination- Autism spectrum and Developmental delays- Sensory and Auditory processing disorders- ADD and ADHDThe program lasts for 30 minutes per day, for 40 days.Each day is split into 2 parts:Day 01.1: first part - 25 minutes of rhythmic music listeningDay 01.2: second part - 5 additional minutes of music - to be paired with the body movement exercises that are available online, through the Soundsory website.  At this website, those using the Soundsory program can access short videos that demonstrate the movements for each day.  These are a series of five simple motor skill activities such as bunny hops, jumping jacks and touching the toes, that requires no additional equipment to perform.  By using more than 50 activities, wearings can begin to improve somatic movement, timing and rhythm control, and balance and spatial judgement.

The headset uses a combination of both bone-conduction as well as traditional air sound conduction to deliver the music, resulting in a complete auditory stimulation.  The bone conduction is located in the head band portion of the headset and makes contact directly with the top of the head.  The sessions for the program can be used while doing activities such as drawing, dancing, or walking around, preferably while the listener is calm and relaxed.

The Soundsory Headset comes packages in a zippered padded case, along with a USB charge cord, a user pamphlet, and a elastic headband (which can help keep the headset on the head during the physical activities if necessary).  The headset has an internal rechargable battery that takes roughly 4 hours to fully charge and can be used for roughly 9 hours per charge.

Neither of my kids have had issues with motor skills and coordination and found the physical activities extremely easy and often silly.  However, we did complete them.  My personal opinion on the physical activities is that I can see how this aspect of Soundsory could really help an individual who does have limited range of motion, issues with coordination, or other issues with gross motor skills.  Having the immersive aspect of the music to focus on while performing each of the daily moves, I can see how Soundsory offers the ability to help make improvements in these areas. 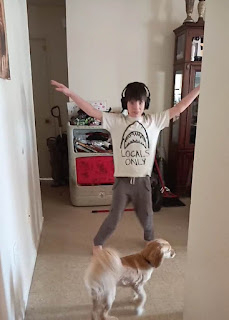 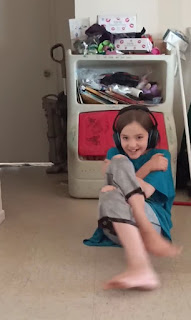 This review is going to focus more on the attention, concentration and focus aspect of the product, as this is the aspects of the product both of my kids, especially Garrett but Ashleigh as well, needs help with.

Our original schedule with using Soundsory was that I would have one kid listen to the daily audio while the other student worked on their mathematics assignment.  We would typically do this after our lunch break.   As Soundsory takes 30 minutes to complete, roughly the same amount of time that their individual math assignment takes, this initially worked pretty well. I would simply select the day that we were on (for the first kid, this was already selected but for the second child I would have to select the day in order to repeat), and he would put the headset on and sit on the couch where he could move his hands in rhythm with the music.  On some occasions, he would move around while listening to the music 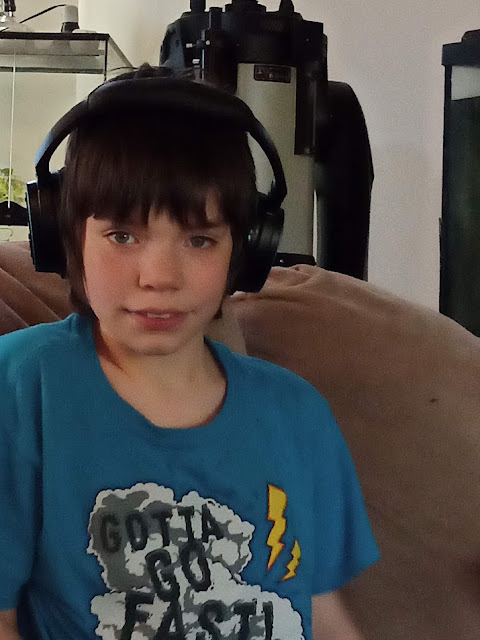 As we progressed thru the program, I started to notice something interesting.  Garrett would tend to have attention issues and not want to do his assignments in the first part of the day, we would eat lunch, he would listen to daily listening for Soundsory and then he would perform much better the rest of the day.

The first few times this happened, I wrote it off as Garrett simply having "a good day" for school that day.  But I realized we were having an unusual amount of "good days". 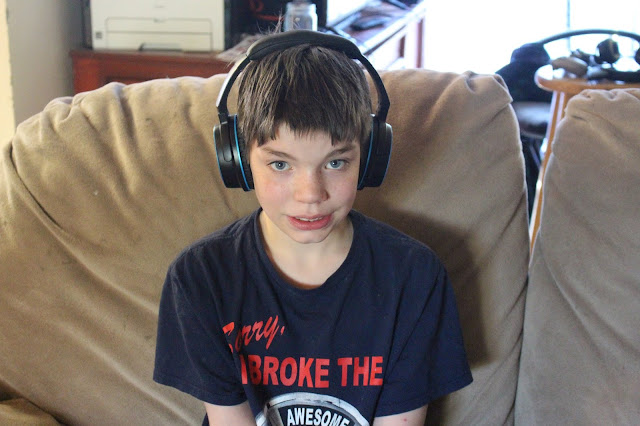 I also noticed that Garrett has started humming music when he was working on a writing assignment or anything else that required his concentration.   In particular, he would hum "When Johnny Comes Marching Home Again".    So instead of his usual whining about having to write, I was hearing his humming and his writing assignments were getting completed.  After a couple of weeks of our "Good days" we decided to try allowing Garrett to listen to the headset first thing each morning  rather than waiting til after lunch.  The outcome was that while he still did not pay much more attention to our reading selections in the morning, than he normally did,  he did pay more attention to our verbal poetry discussions and our history lessons and actually began to contribute more to our discussions (actually providing answers to the questions rather than answering "I don't know").   I'll be honest, usually, for discussions, I feel like Garrett just zones out. However, these last few weeks, he can discuss Shakespeare's Sonnet 18 and 19 with the best of them - he can even tell you what a Sonnet IS and tell you all about about couplets and quatrains.  I have no doubt this is a direct result from using Soundsory daily. 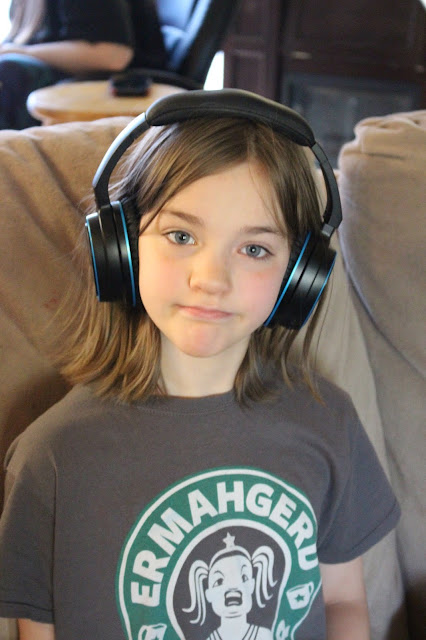 Ashleigh also used the headset each day and enjoyed it very much as well.  I can't say I saw the same changes in her, but then she doesn't have the same issues as Garrett does.  Ashleigh possibly suffers from ADHD but hasn't formally been diagnosed.  While I didn't see the same changes in her brother when it came to the effects extending to his other schoolwork, Ashleigh would sit quietly each day and listen to the music without interruption.  Sometimes, I even catch her humming some of the tunes when she's not wearing the headset.   Ashleigh really likes the music selections but views wearing the headset more as a break in her school work - that's okay by me.

My overall opinion of Soundsory has been very positive, especially with Garrett's response to wearing it.  We are nearing completion of the 40 day period, but I have no doubt that once completed, we will simply begin at Day 1 again and just listen to the selections (leaving out the physical activity component), although they do recommend waiting 4 weeks before repeating the program.


For more information about the Soundsory headset as well as other products from Sound for Life Ltd , visit their website.  You can also find them on the following social media platforms: 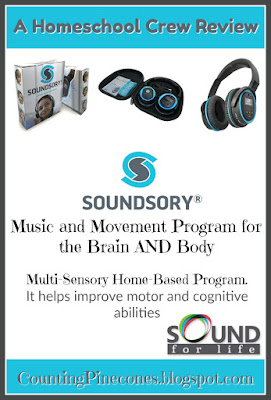 Over 30 members of the Review Crew reviewed Soundsory in their homes with members of their families with a wide range of ages and different abilities.  Be sure to click the banner to read about their experiences today.