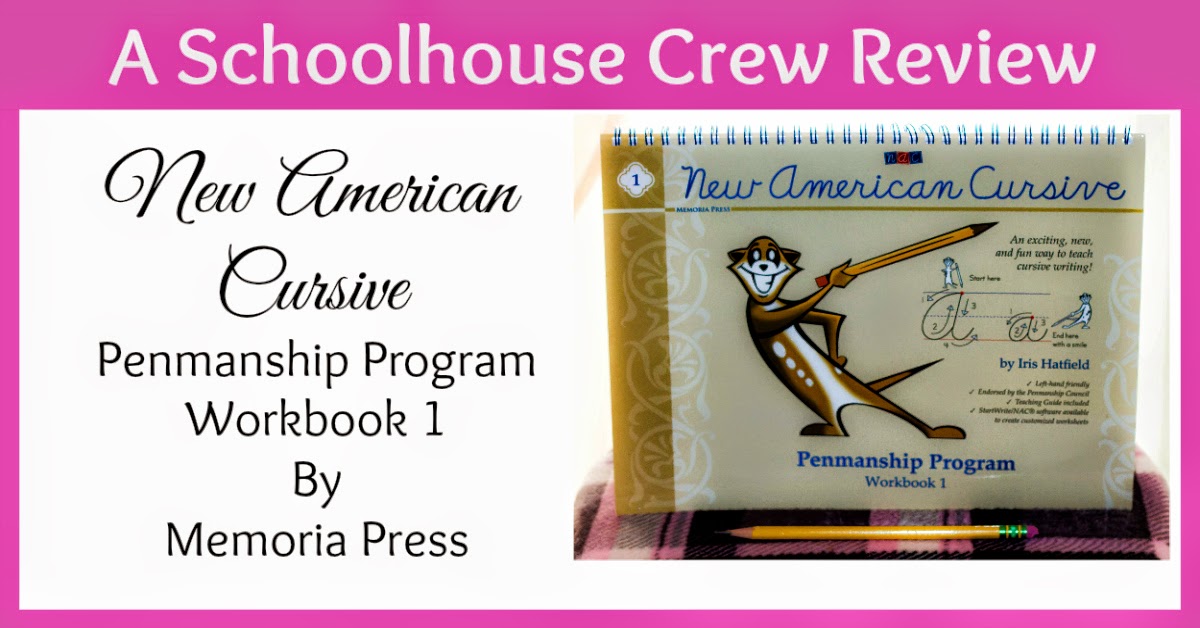 Memoria Press has recently released a new handwriting curriculum that focuses on teaching students as young as 1st grade the fundamentals of writing in cursive.  I was given the opportunity to use the New American Cursive:  Penmanship Program Workbook 1 with my 7 year old daughter for the purpose of this review. 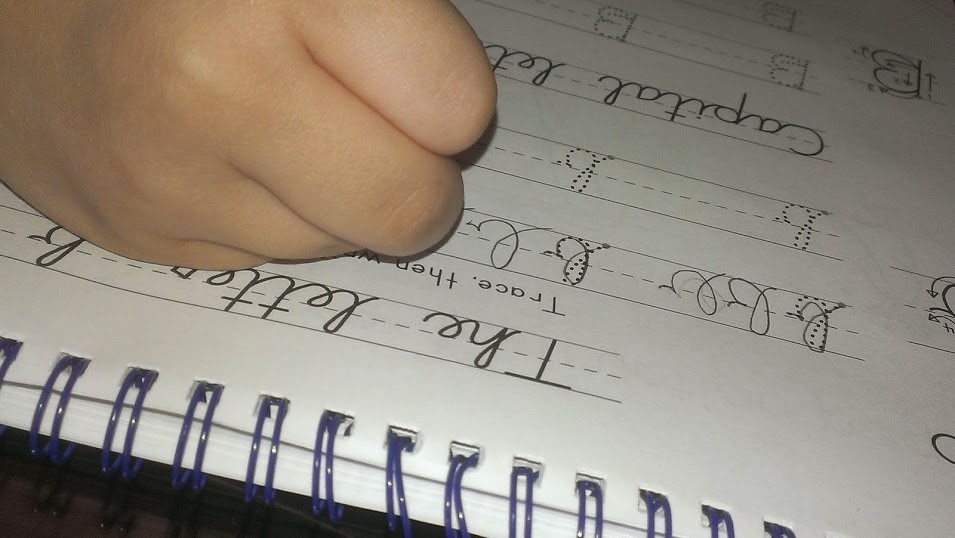 Many of us can remember sitting in school and working on our cursive writing. I think it was around 3rd grade that we began learning the careful strokes and then around 4th grade we were told we could no longer print our assignments but must write in cursive or points would be taken off.  These days students in public schools are no longer expected to learn cursive writing. As emails and text messages replace actual written correspondences, the art of cursive has fallen to the wayside and has basically become obsolete.  However, many homeschooling parents still find learning to write in cursive to be a very important skill.

New American Cursive was designed by Iris Hatfield in order to present an easy to teach, easy to follow method of cursive to younger students. This particular adaptation of cursive writing is a bit more simplified in that it has 26 fewer pen strokes than the top three most common cursive programs.  With Mr. Meerkat as a guide, the book instructs students through each letter as well as using fun activities and doodle pages to keep them entertained. Level One's main  focus is on correct letter formation to obtain legibility.  This is then followed with Workbook 2 and Workbook 3 which focuses on proficiency through copy work. 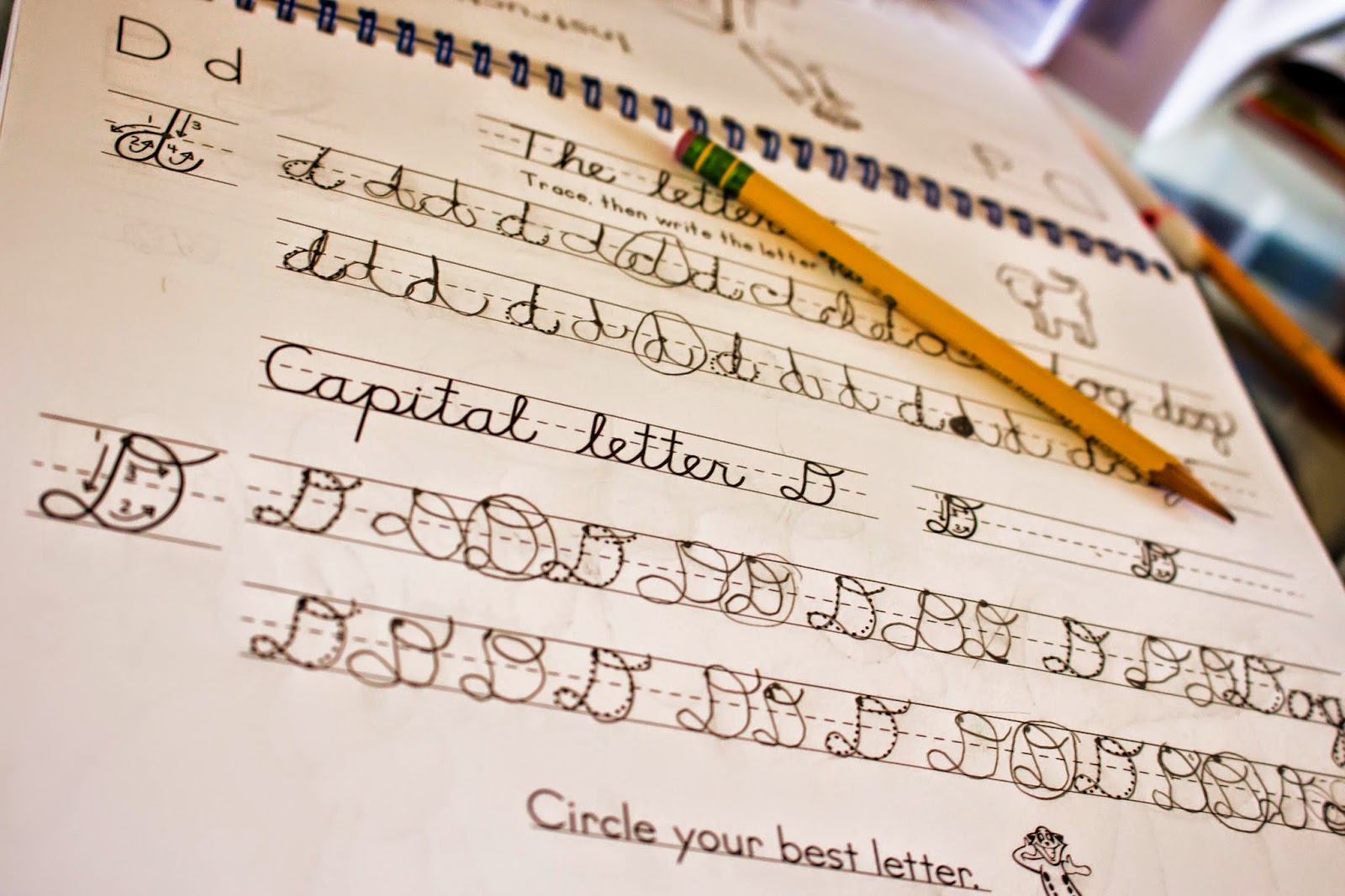 Each book is a top bound spiral notebook which makes it easy for both left or right handed writers to work without impediment. 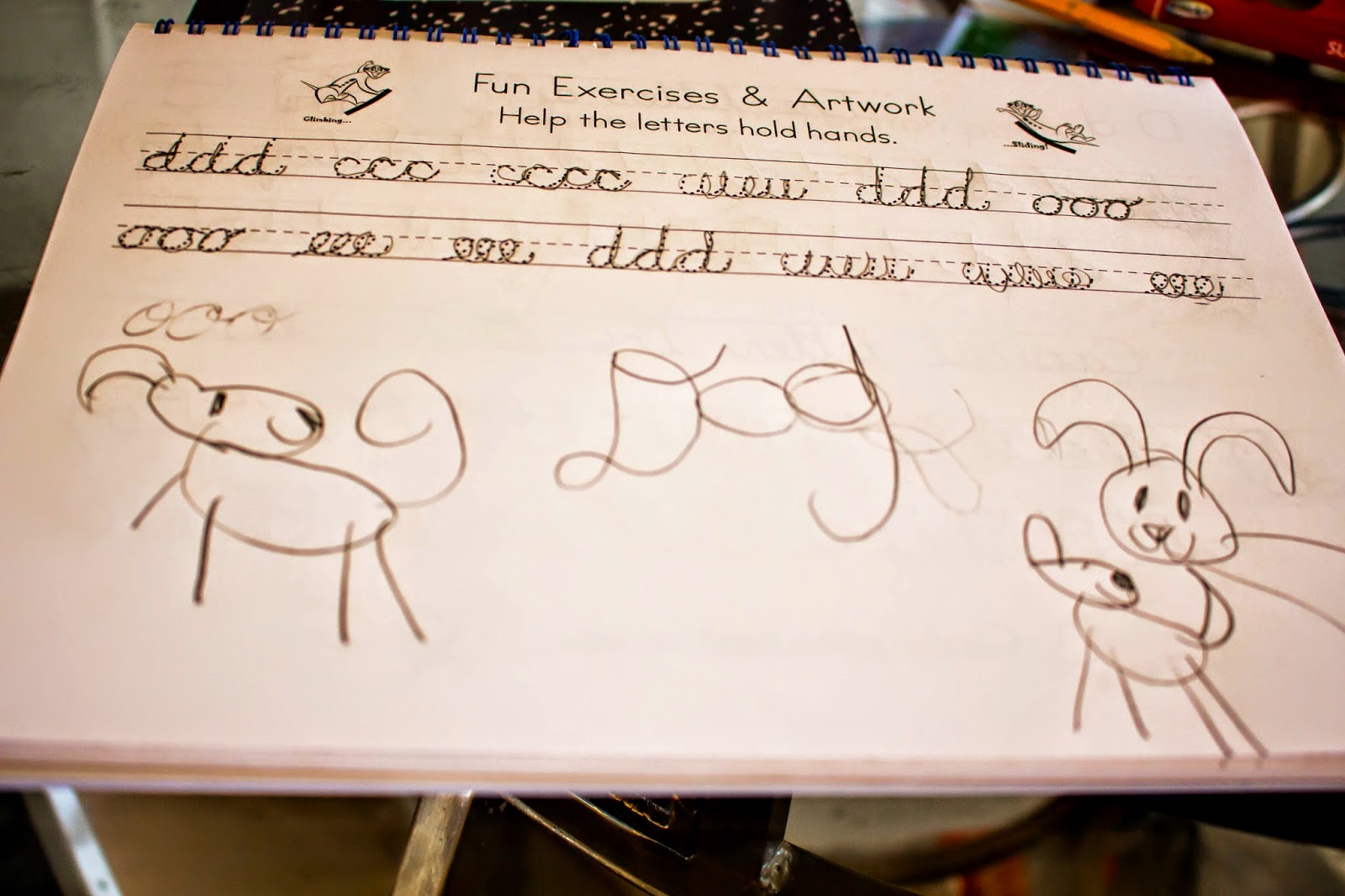 Another plus to this program is that it can be paired up with the purchase of New American Cursive® StartWrite® Software which lets you to create your own worksheets using the New American Cursive font.  This allows the student to continue practicing their cursive regardless of the subject they are currently working on.  (Software is not available on Mac OS)

Early on, I knew that this was a program I wanted to use with Ashleigh, my youngest daughter.  Together we worked on one letter a week for roughly 20 minutes at a time on both Tuesdays and Thursdays. 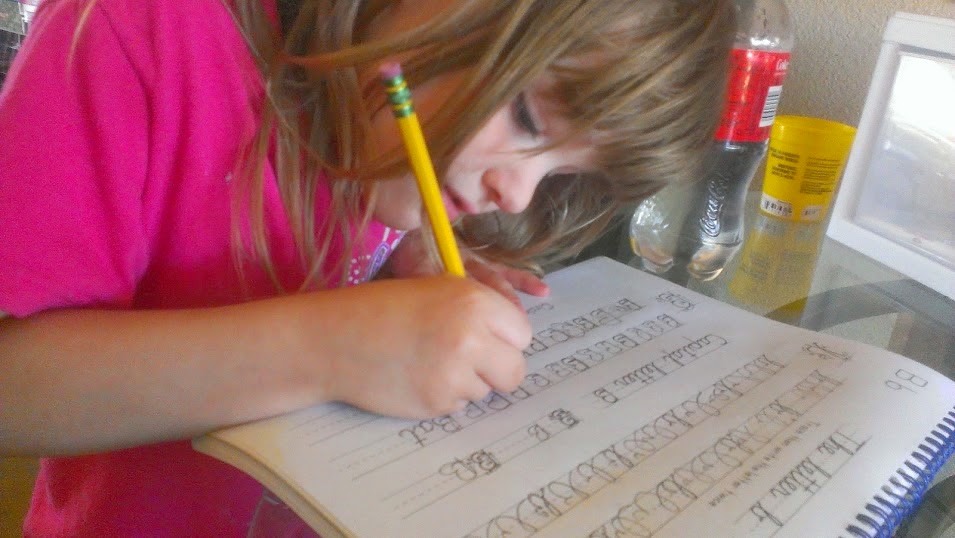 Originally, Ashleigh was super excited  about getting something school related just for her.  That lasted about half way through our very first lesson.   Ash had a lot of fun tracing out the letters with her fingers and laughing as mom made "swooshing" noises when showing her the various loops. When it came time to write, however, Ash wanted to rush through and did not want to actually sit and cooperate.  The first week we had a bit of tears.

The next week was much better.. Ashleigh really liked following along with Mr Meerkat and once she began to actually slow down and take her time to make sure each letter went from the top line to the bottom, she actually stated having fun with it.

By letter D, she began looking forward to doing her writing lesson.  She was a bit worried about the letter D as it has two "loops" but after a few practice tries she stated, "D's are easy Mom!" and actually smiled through the rest of the practice. 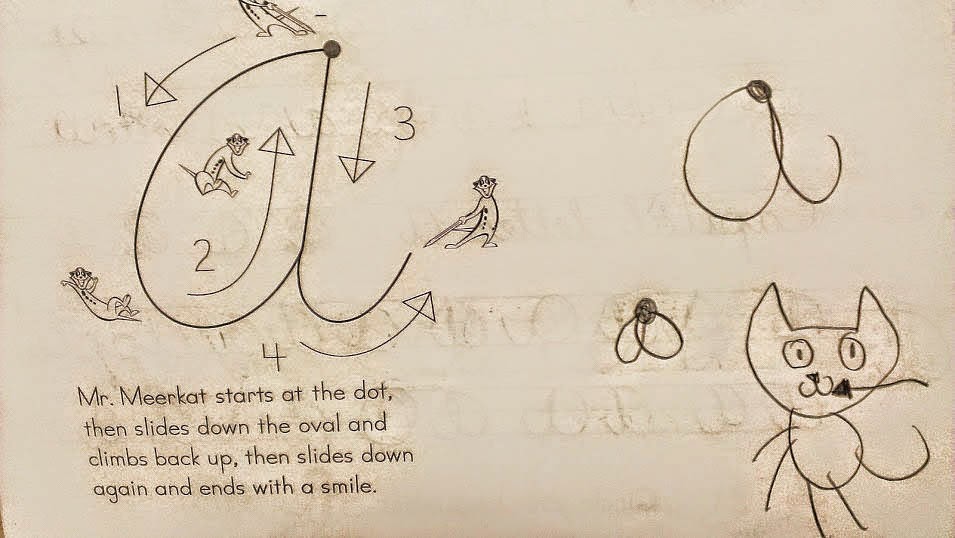 The fun activities and doodle pages really help to make this program fun for kids. Ashleigh really
enjoys getting to the end of the lesson each Thursday and getting to doodle as part of her assignment. Her doodles tend to be things that are included in the lesson or something she visualizes the letter looking like, such as the A looking like the muzzle of a cat. 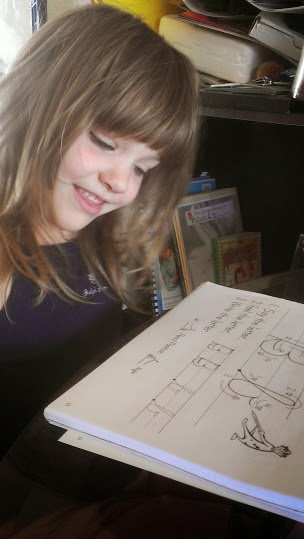 Will she stick with it? I have no doubt she will. This weekend as I was working out in the garden she was having fun tracing the letters she has learned so far in the dirt.

Eventually I would like to get the New American Cursive® StartWrite® Software to go along with the workbook. We had just purchased StartWrite Version 6 prior to starting the New American Cursive program and unfortunately the font is not an available add on for Version 6. I hope this will change in the future or I will probably just purchase the software through Memoria Press at a later date as Ashleigh gets more proficient in her writing. 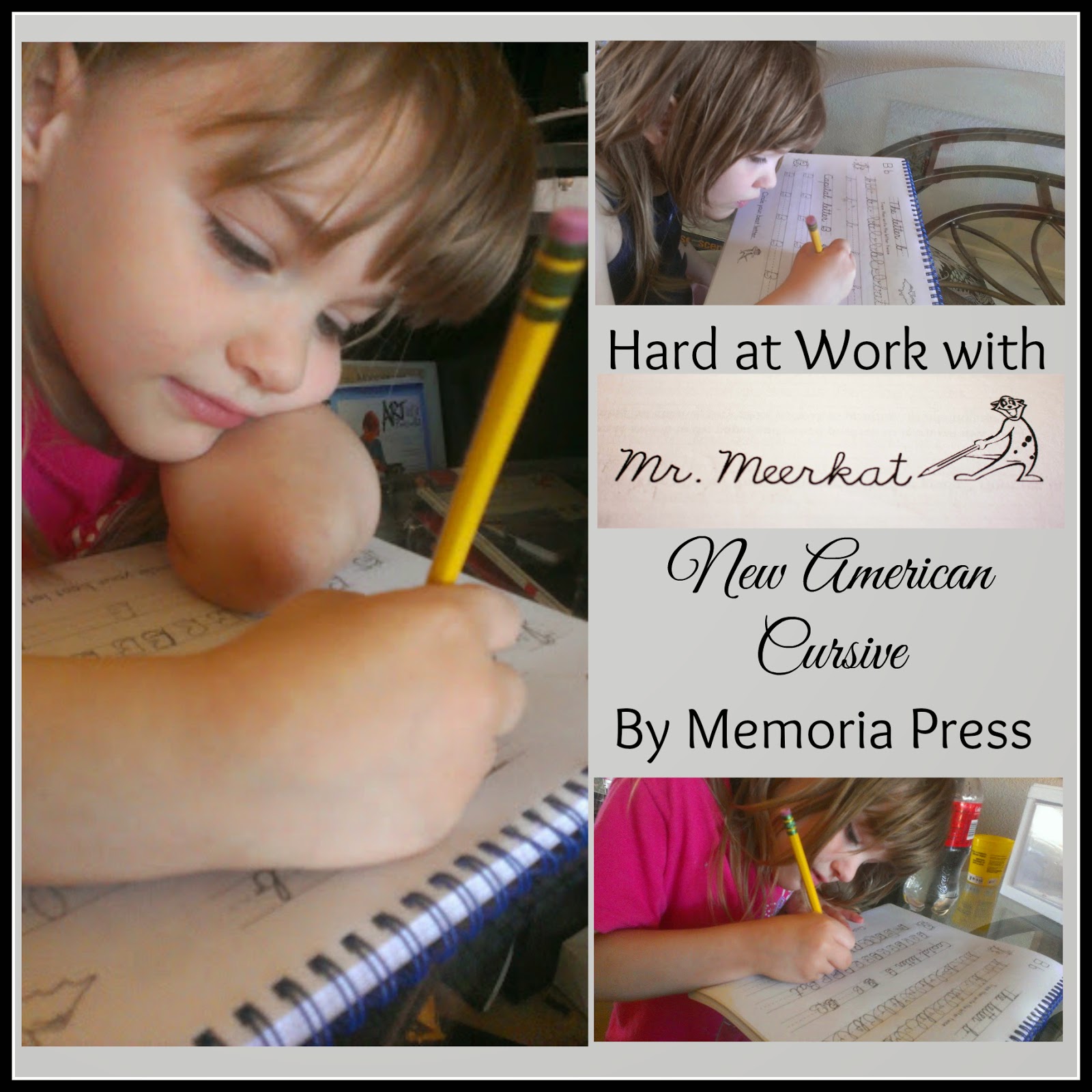 Posted by Brenda Prince at 1:41 AM