When Calls The Heart Season 2 Premiere and Giveaway 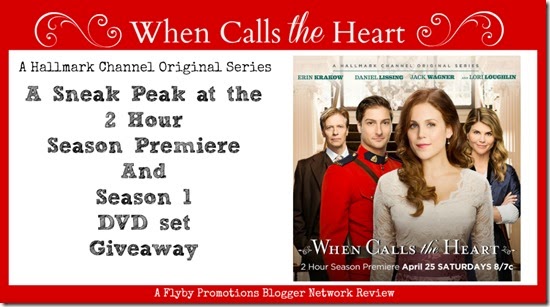 It’s been a long wait since March 29th, 2014 when the final episode of Season 1 of “When Calls the Heart” aired on the Hallmark channel.   For over a year, loyal fans of the TV series have been waiting (not so) patiently to find out what happened after that LONG awaited kiss between Elizabeth and Mountie Jack and what will become of Mr Avery’s investigation into what really happened in the mines of Coal Valley.

For those who might not be familiar with the series, here’s the basics:  Based on the bestselling book of the same name by Janette, this story takes place in the Canadian West. “When Calls the Heart” tells the captivating story of Elizabeth Thatcher (played by Erin Krakow), a young teacher accustomed to her high society life, who receives her first classroom assignment in Coal Valley, a small coalmining town where life is simple, but often fraught with challenges. Lori Loughlin plays Abigail Stanton, a wife and mother whose husband, the foreman of the mine, along with a dozen other miners, including her son, were killed in an explosion. Elizabeth charms most everyone in Coal Valley, except Constable Jack Thornton (Daniel Lissing) who believes Thatcher’s wealthy father has doomed the lawman’s career by insisting he be assigned in town to protect the shipping magnate’s daughter. Living in a turn of the century coal town, Elizabeth will have to learn the ways of the frontier if she wishes to thrive in the rural west on her own.

My suggestion, binge watch the first season over the next two days before the season 2 premiere ;)

Thankfully, much to everyone’s excitement, Saturday is the long awaited two hour premiere of Season 2. It will air at 8/7c on the Hallmark channel and with it will come some pretty huge changes in Coal Valley.  And TRUST ME, you’re going to want to watch because there will be plenty of discussions among the Hearties after it airs. (Be sure to follow on When Calls The Heart's official Twitter and Facebook with hashtags #FaithTV & #Hearties during the premiere and don't forget to join up with the Hearties Facebook as well ).

The season premiere sets the tone for two recurrent themes this season: Family and Hope.


This season will introduce us to the Thatcher family when an illness brings Elizabeth home to visit in Hamilton. Accompanied by Jack, Elizabeth introduces him to her older sister and her parents. We also get to meet Jack’s younger brother Tom who catches the eye of one of Elizabeth’s sister.  Season 2 will also bring a bit of competition for our favorite Mountie.

Change is also in the air for Coal Valley as a new judge arrives to replace tough as nails Judge Jedidiah Black who Mr Gowan knows couldn’t be bought.  This new Judge is just a bit too friendly with Mr. Gowen and his defense team. 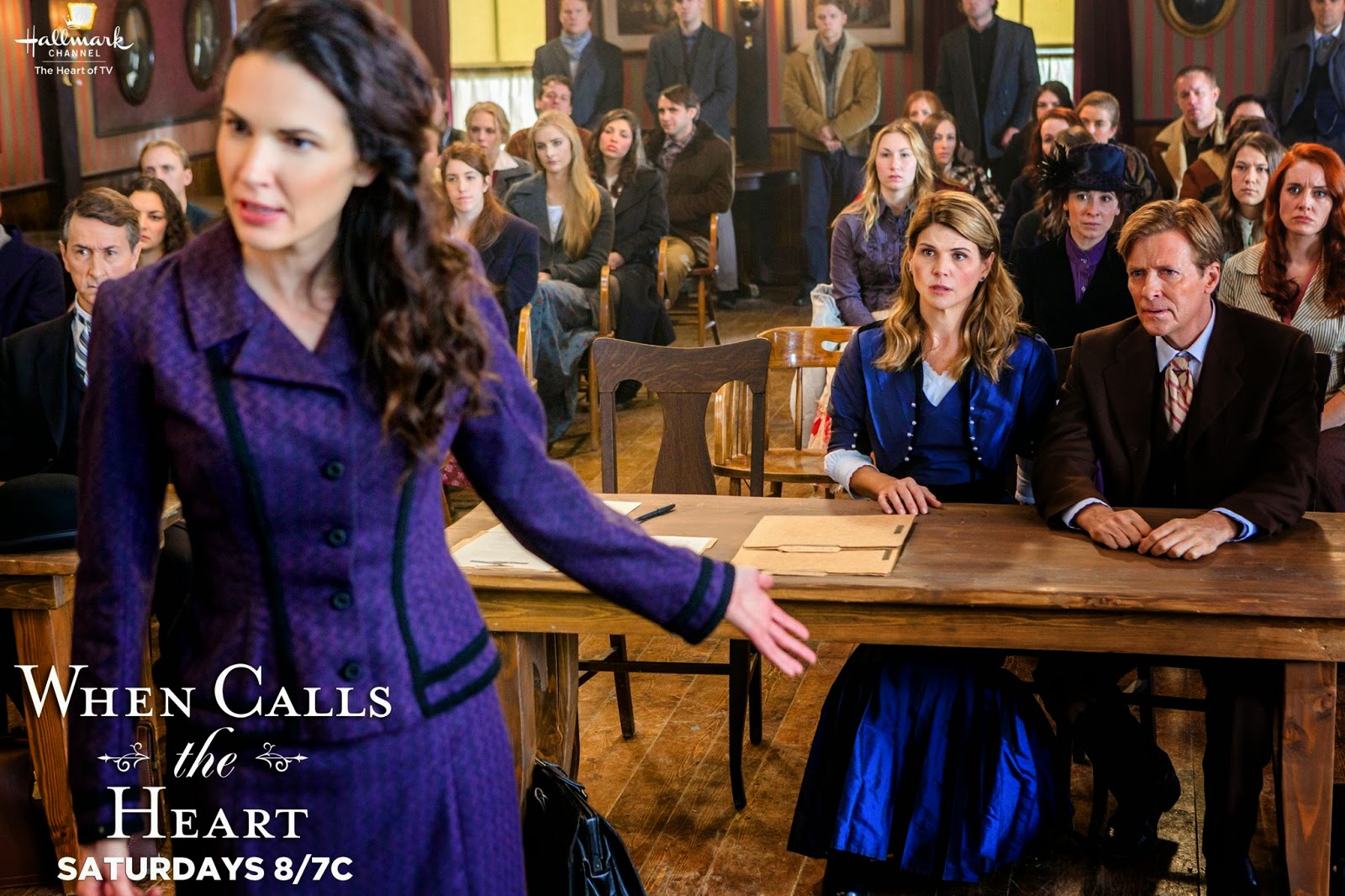 Tension also mounts when the Prosecutor arrives in coal valley wearing a skirt much to the
disappointment of many of the widows whom feel that a woman doesn’t have much chance in the courtroom.  Lies are abound and a huge secret revealed during the trial will affect the memory of Abigail’s loved ones. How will that secret affect Abigail’s life in the future?

A tall, dark and handsome mysterious man on a motorcycle arrives in Coal Valley who just might be what the town needs to pull Rosemary’s attention away from Jack. Who is he, why is he there and is he up to no good?

Unfortunately, I can’t give more away then these teasers (no spoilers, sorry guys) but hopefully it is enough to get your mind wondering.   To answer these questions and more, be sure to watch the season premiere when it airs on the Hallmark Channel on Saturday April 25th at 8/7c. 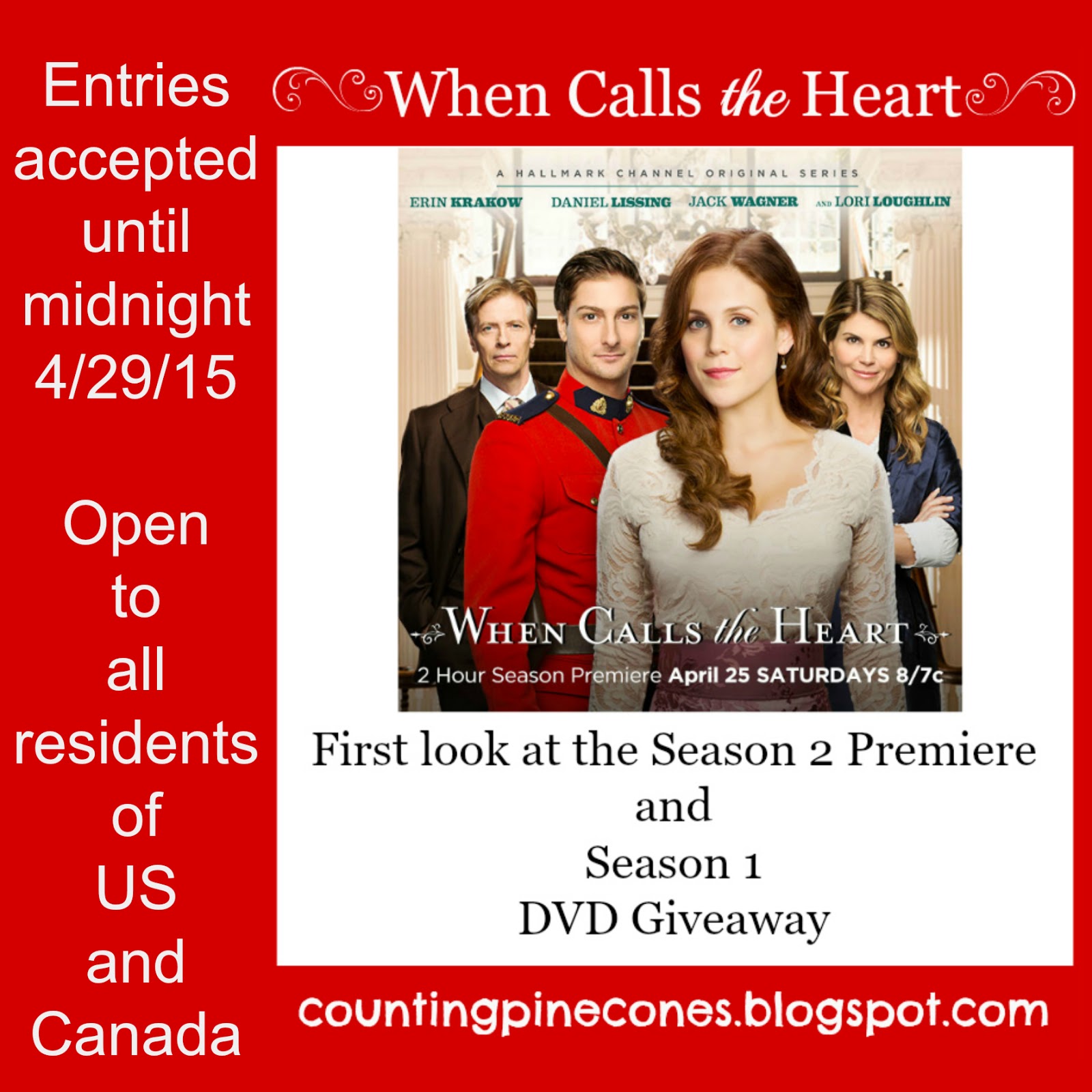 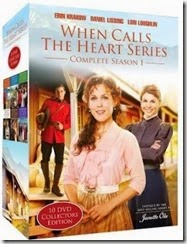 Word Films and Flyby Promotions has provided me with 1 set of When Calls The Heart Season 1 on DVD ($60 value!!) to give away to one of my lucky readers.  Relive Jack and Elizabeth’s first kiss, the spider in the boat scene or any of your favorite Season 1 moments any time you want with this 10 DVD collectors edition. This giveaway is for residents of the US and Canada.  Just enter through my rafflecopter giveaway following all the legal stuff :)


"Disclosure (in accordance with the FTC’s 16 CFR, Part 255: “Guides Concerning the Use of Endorsements and Testimonials in Advertising”): Many thanks to Propeller Consulting, LLC for providing this prize for the giveaway. Choice of winners and opinions are 100% my own and NOT influenced by monetary compensation. I did receive a sample of the product in exchange for this review and post.

a Rafflecopter giveaway
Posted by Brenda Prince at 9:34 PM