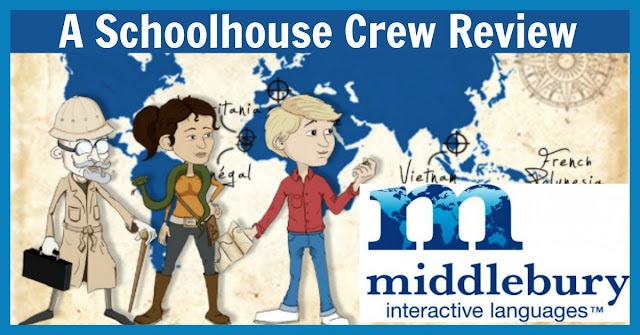 I'm a firm believer that all students should learn a foreign language. I also believe that this learning should start early in the student's education.  So when we were given the opportunity to to review Elementary French I for grades K-2 by Middlebury Interactive Languages, I was pretty excited.

Middlebury Interactive Languages uses an immersion approach to teach children of all ages foreign languages. Designed by Ph.D. level academics and linguistic experts, this online, browser based program is designed to teach students various languages from around the world. Whether Chinese, French, Spanish or German, this approach is said to be a full curriculum using the same techniques used by Middlebury College's language schools.

I would really like to say this worked for my kids. Unfortunately, it did not. The format of this particular lesson was extremely difficult to navigate and very confusing for both my kids.  I have looked at other lessons from this particular group and it seems as if maybe it's just because the Kindergarten version of French isn't as developed as the others that seem to flow seamlessly.  With this particular lesson, everything has to be navigated from the side and various folders in order to get to the lesson each day.  This proved an aggravation for both my kids who wanted to be able to go right back to the lesson they were on.  They had to again navigate back through these folders each time they finished a slide for their lesson.  This may work well enough for older students but for younger kids, this is very confusing for them, as they had to click through 2-3 folders just to get to the lesson.

As said, I feel that this particular language lesson might just be unfinished, as other lessons look much more polished and user friendly.  Until then, I wouldn't recommend this particular format for younger children who are just learning to use a computer and would be easily confused.  Older students will probably do better with it but as this particular lesson is geared for grades K-2, I think it needs much work before it's able to be used by the intended target audience. 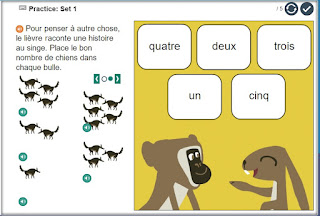 In this particular case, there was a bit more that interested Ashleigh then there was for Garrett and this particular program failed to hold his attention.  Ash really liked the cute graphics, especially the ones involving animals - she loves anything animals.

Overall, it has much potential. But as it stands, my kids did not find this particular curriculum engaging and I didn't find a whole lot of learning going on.  It might work for your kids, but for my younger children, it just didn't work for us.

Have my kids been learning French?  Yes and no. Ashleigh has picked up a few phrases but I wouldn't say she has picked up any real comprehension as to what she is saying. Maybe this will come as they use the program more and more.  Garrett however, zones out when we pull this out and really wants nothing to do with it.  So, it's somewhat working for one kid and not working at all for another (which is pretty typical for ANY curriculum and isn't a real fault for Middlebury Languages).  I do believe if they would more away form the Table of Contents formatting for Navigation and make this much more user friendly for younger kids, it would be so much better.

Members of the Crew had the opportunity to review various other languages and levels.  Be sure to check out what they have to say about the other various offerings from Middlebury Interactive Languages by clicking the banner below.

Posted by Brenda Prince at 9:57 AM