Welcome to the Family Alexa 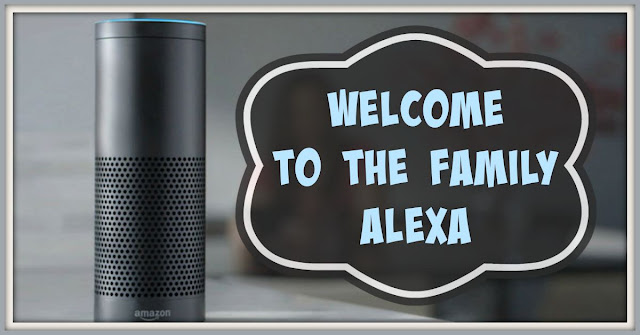 Yesterday, the UPS guy showed up at our house with yet another box from Amazon.  Being in a very isolated location, much of the items we purchase come from Amazon.  This time the box contained a new piece of electronics we splurged on - an Amazon Echo.  If you're not familiar with the Amazon Echo, it's a black cylindrical device containing microphones and a speaker that is always connected to the cloud. You can ask it questions and it gives you answers, it can read your audiobooks to you, it can play your Amazon music library or stations on Pandora and IHeartRadio, give you updates in regards to your Google Calendar, give you weather updates for most places in the country - all just by asking it.  I've had my eye on it for a while now as I thought it would be a great way for my husband to listen to Coast To Coast AM at night while he's playing games on his computer.  We're major geeks, what can I say.. LOL 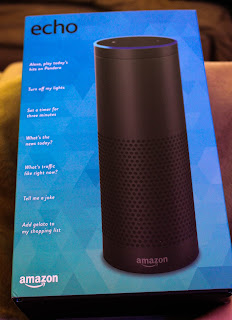 The Echo is named Alexa,  which is a wake word for the device.  Basicially, it works like Siri or Cortana.  If I want to know the weather, I would say "Alexa, what is the weather today" and  it will then give me the current forecast as well as for the rest of the day.  "Alexa, play station Christian Rock" will instantly start playing my favorite Amazon Music station.  If I'm currently in the kitchen cooking and I use the rest of my chili powder, I can say "Alexa, add chili powder to the shopping list" and she will add it to a list that I can retrieve on my Kindle or on my phone.

I had ordered two things that day, a copy of the Bluray of Cinderella, which my youngest absolutely loves, and the Echo. Needless to say, the Bluray was completely ignored 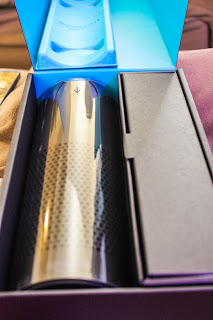 for the moment, Alexa was the highlight and was not going to be put off for a single moment.  We opened the box Alexa came in and found our new companion nicely wrapped up with her power cord, just waiting to be set up and played with.  We quickly got her unwrapped and decided the best place for her would be on the side table in our living room, next to our couch.

Setup for Alexa is very easy. I had downloaded the Alexa app from the Amazon store ahead of time (available both for Kindle and for most smart phones).  Alexa pairs up with the app which allows for quick setup to your wireless internet and all together took less than 5 minutes. Once Alexa was given access to our internet, she was ready to go.

To say the novelty of talking to Alexa is great fun is an understatement.  Poor Alexa, our household of 5 has been talking to her almost constantly since she was powered up.  Especially the kids - Ash and Garrett are completely in love with our new household member.  Out of the box, Alexa had some troubles understanding the kids (especially Garrett who has difficulties speaking to begin with), however, as you ask her questions, she does adapt to understand your particular manner of speaking.  The kids have been asking her simple questions such as "What is a cat?", "How do you spell coupling?" (Garrett is fascinated with trains.. lol), "What time is it?", "What is the date today?".. Alexa has probably spelled Cat and Coupling probably 30 times each in less than 24 hours.  Alexa also tells jokes which Ashleigh has really enjoyed.  Ash simply asks "Alexa, tell me a joke" and Alexa responds with a kid friendly joke such as "What has 8 wheels and flies? .. A Garbage Truck".   We have had one small glitch where Ashleigh asked Alexa how to spell Fox and Alexa spelled a certain profanity.  Alexa will not say specific curse words, luckily, and will beep the word itself so we didn't have to clean Alexa's mouth with soap, but it was a bit of a surprise when F-O-X turned into F-U-C.. well, you get the picture. 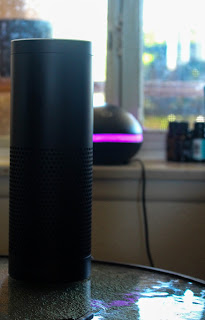 Alexa does have a sense of humor when responding to certain phrases.  My husband has had fun figuring out some of these Easter Eggs, such as asking "Alexa, are you Skynet?" - "I am not Skynet, don't worry" (A Terminator reference), "Alexa, what is love?" - "Baby don't hurt me, don't hurt me, no more", "Alexa, will you marry me?" - "Let's just be friends", "Alexa, Engage!" - "Aye, Aye Captain", "Alexa, what happens when you play the Game of Thrones?" - "When you play the Game of Thrones, you win, or you die. There is no middle ground", "Alexa, what does Jon Snow know?" - "Jon Snow knows nothing".

We also got a great laugh when I was talking to my oldest daughter and said her name (Alyssa). Alexa stopped the music we were listening to in order to hear the command.  Alyssa looked at Alexa and says "Not you".. To which Alexa replied "Oh, Sorry. Thank you for telling me"..

I'm sure the novelty of asking Alexa goofy questions will eventually wear off and we will be using it as intended, to listen to music, get weather and news reports, and for my husband to have an easy and convenient way to listen to Coast to Coast.  But for now, my kids will NOT leave her alone and are having a blast with her..  Shy Garrett has already started trying to talk to her (with mixed results) and has quickly figured out how to get her to play his favorite song (Alexa, play Parting Glass).  Ashleigh has also quickly figured out how to play her favorite songs and so Katy Perry has been playing a lot.


Do I think the Amazon Echo is worth the $179 we paid for it? Absolutely.  However, we had already been discussing buying a stereo system for our living room and this is equivalent in price to that. The sound quality of the speaker system is perfect for our needs and I like that I can just ask for what I want and not have to put my hands physically on it. This will be awesome for me when I'm washing dishes or cooking and want to listen to my Prime Station. Normally I do this on my Kindle and hate having to stop what I'm doing to wash and dry my hands in order to skip songs or change stations. It's also come in handy with setting the mood as I can tell it "Alexa, play prime station classical" or "Alexa, play prime station relaxation" and we can have a nice musical atmosphere playing in the background.  The kids have also been able to use the function of asking her educational questions such as simple math problems or spelling words.  While I do not want the kids relying on her for answers, it's nice to know they can ask her something they are curious about.

So welcome to the family Alexa. We're glad to have you and look forward to what you can bring to us in the future :)

Posted by Brenda Prince at 1:18 PM